Hop on the ferry to Vancouver Island and it’s motorhome heaven. Mike MacEacheran buckles up for a dream road trip with his family from surf beaches and shimmering lakes to black bear safaris. 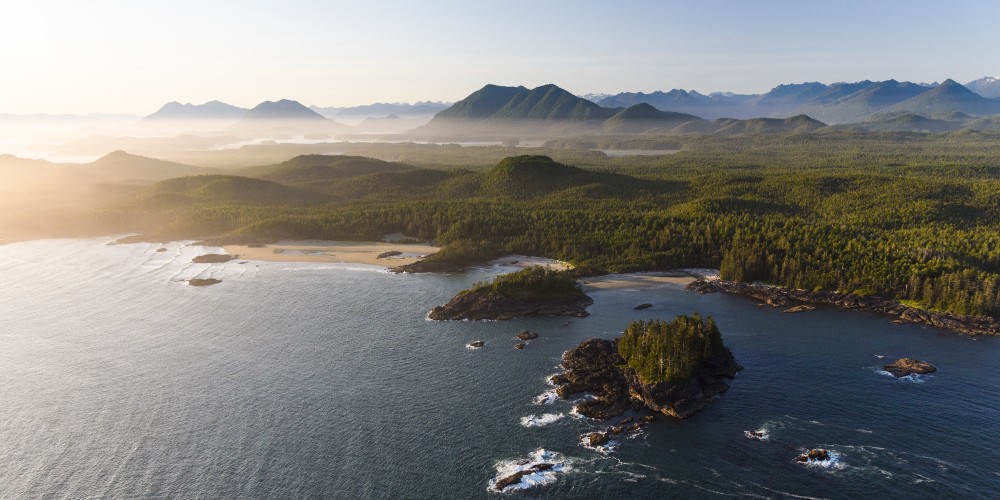 Vancouver Island and an RV unleashes our spirit of adventure

Beneath the canopy in early evening light, the Douglas firs swaddling Lake Cowichan flickered with streams of amber, gold and orange. We’d stirred enough interest in our two children by promising toasted marshmallows after dinner. Now we were clambering — two steps forward, one step back — through the woodlands to take a dip in Gordon Bay, a natural swimming pool bound by a log boom. 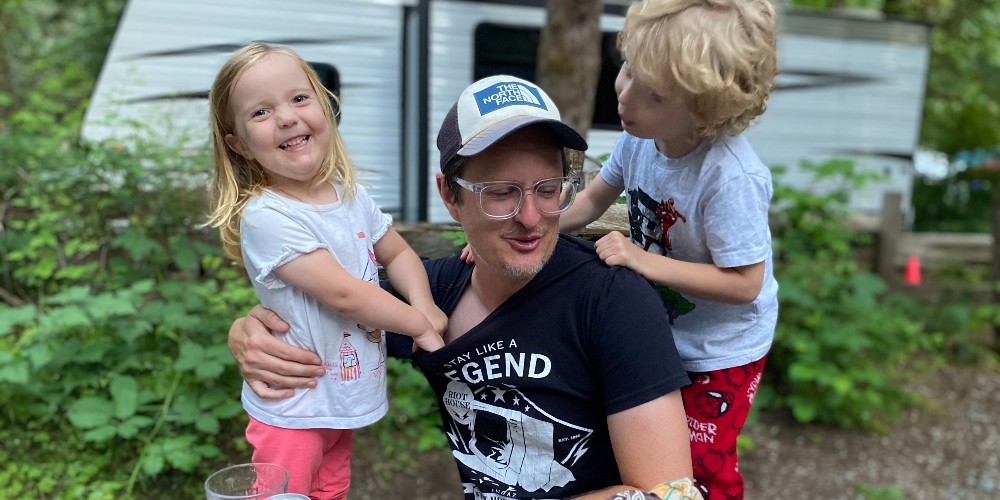 Striped ducks took flight and a bald-topped eagle swooped. In passing, the park warden reminded us of the campground’s black bear rules: exercise caution, never approach or feed them, maintain a clean site. I’m sure we wouldn’t have met one considering the noise my kids were making. Then my wife saw them: two dark eyes peering back through the eerie forest just above a twitching snout. It was a skittish black-tailed deer on the run, not a molar-grinding bear waiting to pounce.  But it was also a fleeting insight into how truly untamed Vancouver Island can be. Our walk back to camp was done in double quick time.

That sense of adventure, I suppose, is why we came. I’d been to Vancouver Island in British Columbia before. Heck, I’d even travelled all the way north to almost-off-the-map Port Hardy at its very tip twice. Only I’d never felt it suitable for a family holiday. Jam-packed into a hulking RV rental with a five and two-year-old for 10 days? No thanks. 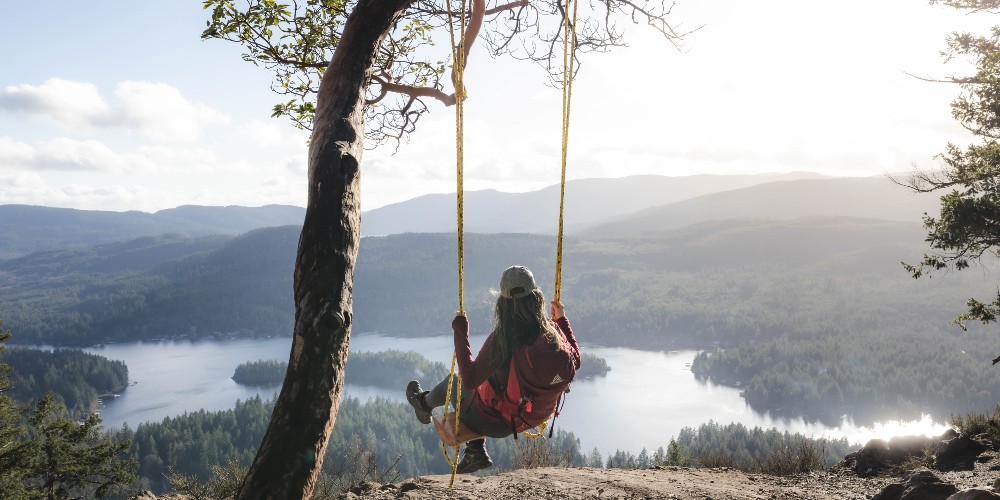 But the past two years changed all that. We were looking for somewhere as far away from home as we could afford. A big dollop of open road, mountains, coast, wintergreen forests and wildlife seemed sounded both ideal and Canada’s greatest hits in a nutshell. Then we checked the Pacific Northwest practicalities. Affordable flights to Vancouver? Yes. A scenic ferry ride across the Strait of Georgia to Nanaimo? Check. Several cheap campsites in provincial parks? Highly possible. A fully-fledged food truck scene to save us cooking? Another box ticked. We were sold. Plus, Canadians are just so darn nice, aren’t they? 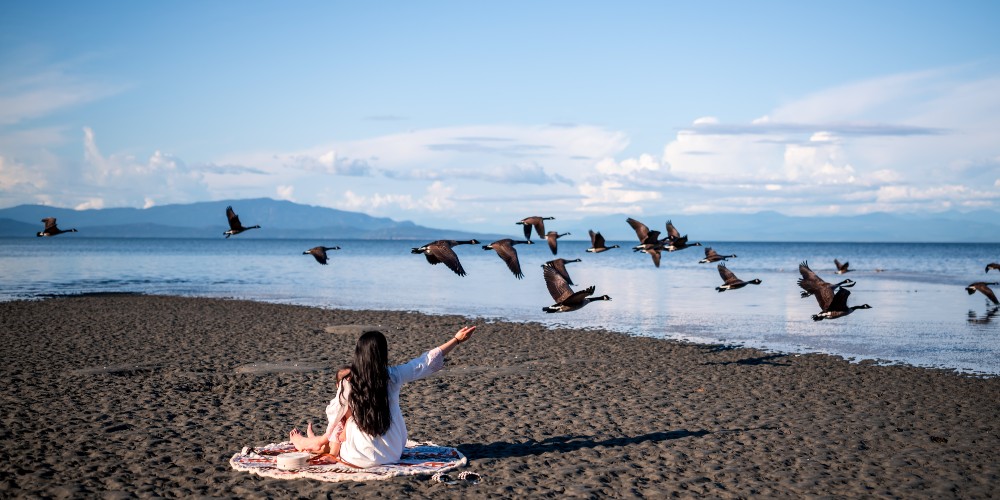 It was late July, and, truth be told, the first few days were bliss. As big as Belgium, Vancouver Island is fringed by fudge-brown sands that gently-slope into both bracing waves and kid-friendly bays.  Even the chilly lakes, waterfalls and inland river pools were blue-green and ripe for throwing ourselves into the water. Hydromania exists in British Columbia and all swimming here is wild.

After Gordon Bay Provincial Park on Lake Cowichan, we motored north past Parksville to Englishman River Falls. These were so-named by the indigenous First Nations after an Englishman who drowned while attempting to forge the rapids. Then it was onwards to Sproat Lake, almost the innermost point of the island. 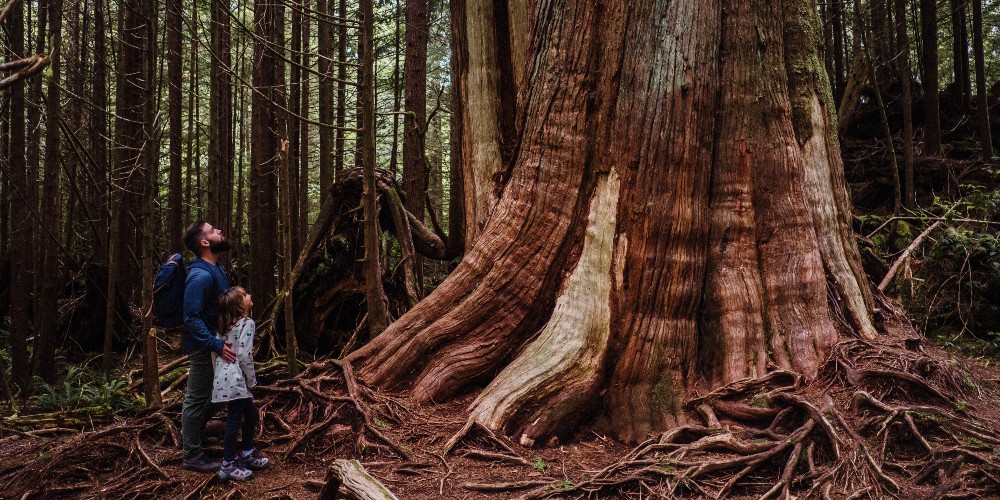 Surrounding peaks soared and the lake was warm enough to warrant blowing up our son’s inflatable rocket ship. Later, we burned sausages, seared more marshmallows around our campfire and were again grateful to the park ranger who delivered a £6 pack of fresh-cut timber to the door of our RV. It was like cream from a milkman, and this time there were no cautionary bear tales.

When darkness eventually fell, we blended into the forgotten world of the forest. Unable even to see the stars because of the tightly-knit canopy above us, we were grateful for the sparking pit-fire, around which we felt more contented than ever. 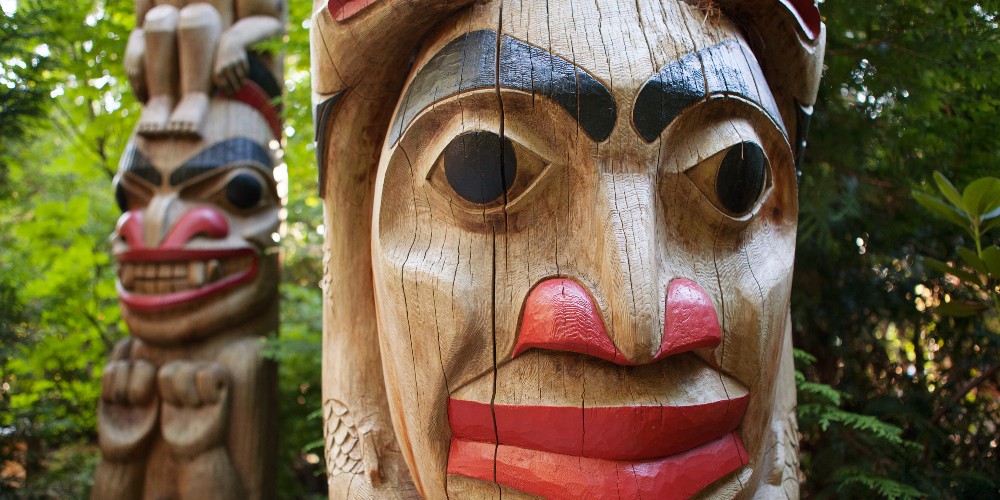 The next morning it was time for some indigenous First Nations culture. Canada has more than 630 recognised indigenous communities. On Vancouver Island alone there are 50 individual bands and tribes. Spread across the overlapping territories of the Kwakwaka’wakw, the Nootka and the Coastal Salish, their pre-settler history shows Canada as it used to be before lumberjacks, ice hockey and Celine Dion.

Incredibly, there are prehistoric petroglyphs on a cliff overlooking Sproat Lake. And the K’ak’awin archaeological site of rock carvings is inscribed with what, to my children’s eyes, were an orca with wings, an upside-down wolf and a crocodile-jawed sea monster. Even weirder, there was no one else gawping beneath the artworks besides us. We were delightfully alone. 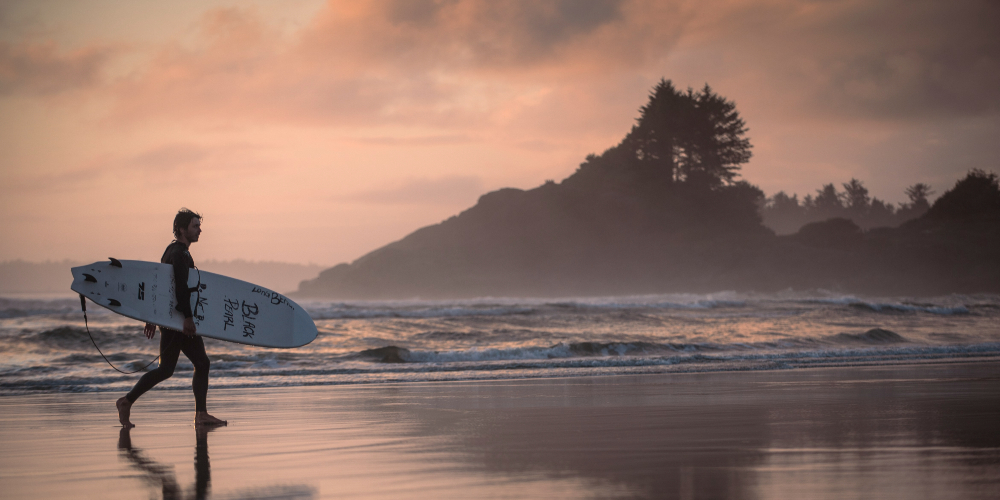 The only thing more prevalent than First Nations totem poles, thunderbird and raven prints and hand-woven blankets on Vancouver Island is beach.  Huge swathes of shore run uninterrupted and free along the 285-mile Pacific Coast. They range from lumber-washed stretches of stormbound sand to golden curves of cold Hawaii happiness. And, in quieter moments, you can often have an entire beach to yourself. 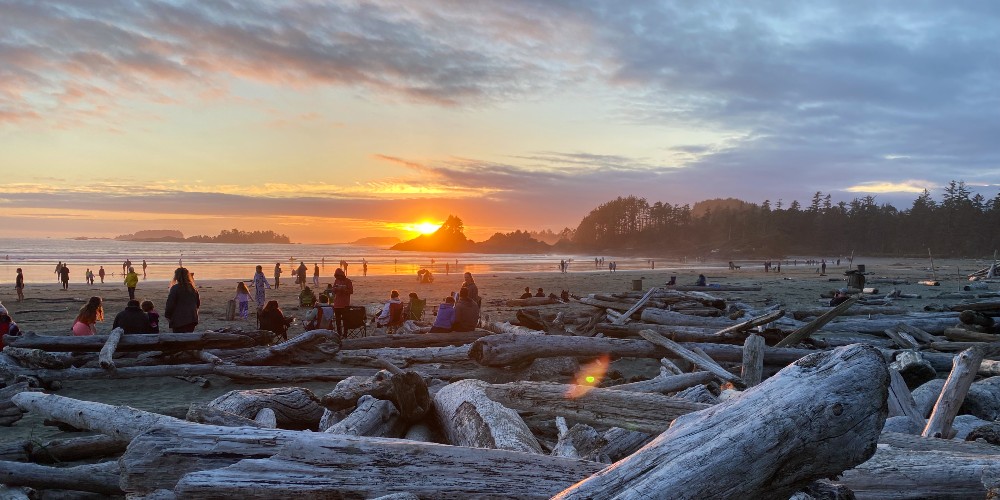 However, we travelled farther west to the end of the road through Pacific Rim National Park Reserve and onto Tofino. This is a Shangri La for Vancouverites on their annual summer holidays so we were far from alone. But the beaches here are irresistible for wet-suited surfers, like my wife, and for boogie-boarders, like my son and I. Completely outrageous salmon-pink sunsets woo everyone and as party pieces go, they rank as highly as those you get in Southeast Asia or Australia. So while the kids chased waves and built higgledy-piggledy sand forts at dusk, we settled back with chilled rosé, decanted into coffee cups to swerve BC’s strict open-container alcohol laws. 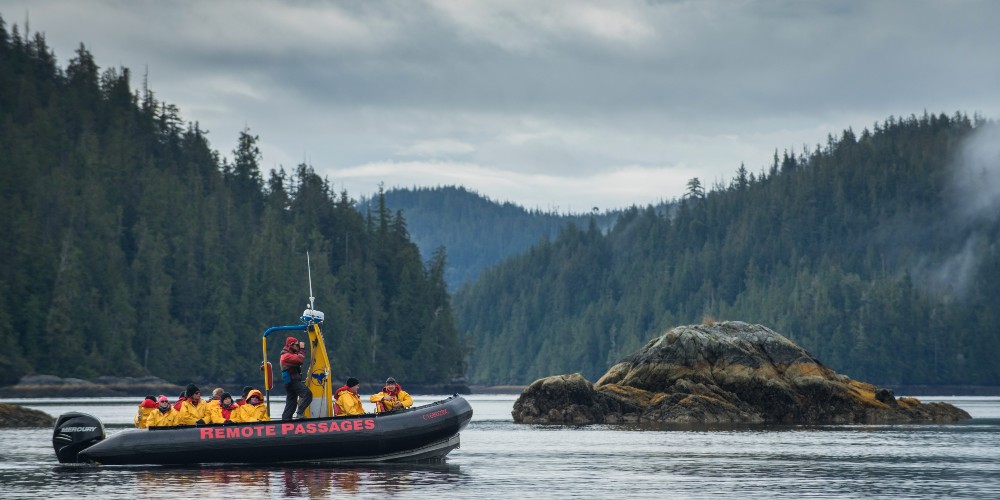 We stayed at Surf Grove on Cox Bay for four nights. It’s an exhilarating RV campground tucked between the spruce off the beach, only a moment’s dash down a track to a half-moon bay. Here soft sand and frothing waves delivered an enormous sense of wellbeing and calm. Every morning after breakfast – Canadian bacon with toast and maple syrup, of course – our wide-eyed kids raced down to the beach before we’d remembered to brush their teeth. Oops! And we’d be there for the best part of the day. 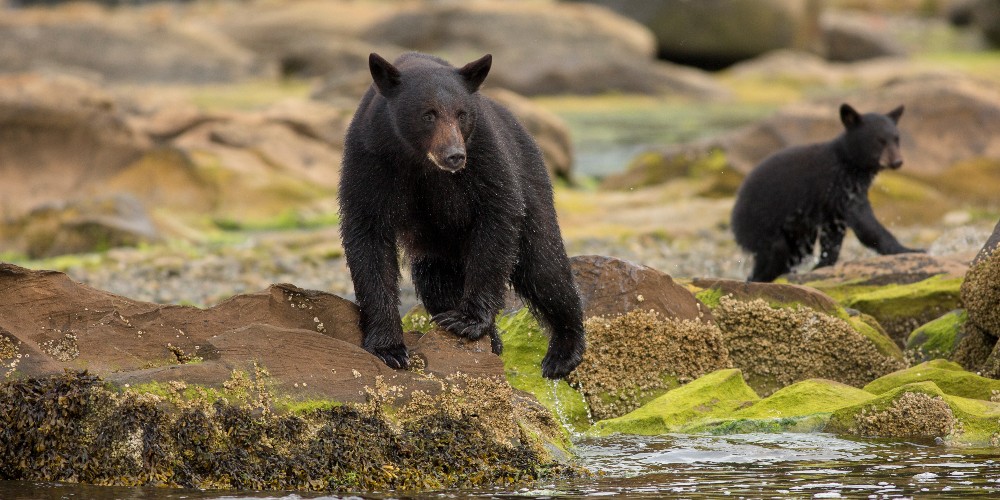 For bucket-list activities, Tofino is where you will be lulled into the delusion of becoming a wilderness explorer. Here you can sea kayak in sight of a flurry of dolphins along the cove-nibbled landscape. Or paddleboard beside sea lions to an imagination-pricking island in Clayoquot Sound. Or join a textbook black bear watching safari around the time-warp teaser of uninhabited Meares Island and its micro-islets.

We opted for a three-hour tour with West Coast Aquatic Safaris. This certainly suited families with young kids like ours. The soundtrack was of muted squeals and snorts of laughter accompanied by bears shuffling from forests down to the shoreline to crack barnacles and tongue-scoop mussels at low tide. Naturally, the children were happy, because they saw five wild bears for the first time. Parents like us were happy because it was totally tantrum free. 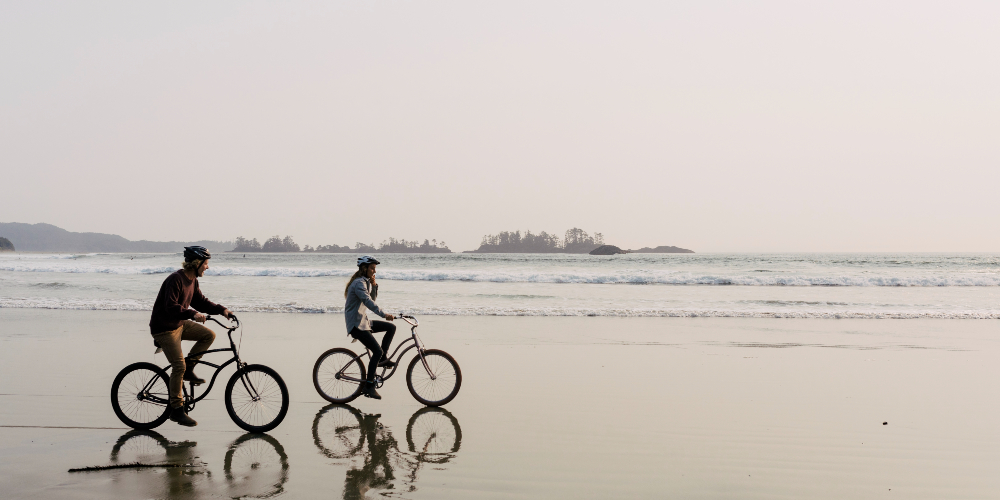 Sunsets are then reserved for family cycles along Chesterman Beach. We hired bikes and a trailer from Tofino Bike Co. and alighted at Tacofino: a West Coast-meets-Oaxaca food truck south of town. Here, the go-to are ling cod and albacore tuna tacos. Tofino’s surfers are suckers for them served with cold cans of hazy IPA, preferably from nearby Tofino Brewing Co. And the wow factor was so good, we went twice.

The joy of visiting Vancouver Island in summer is that the beach is always waiting. Tofino can get thronged with families, but there are dozens of other holiday brochure sands that pop onto your must-see map. Like Pacific Rim National Park Reserve’s gorgeous Long Beach. It’s the longest on Vancouver Island and with plenty of meditative space for everyone, and their dog.

Peace from other visitors, if not the waves, can also be found along the west coast right down to Ucluelet, a First Nations community home to the ‘people of the safe harbour’. But instead, we packed up the RV and headed back east. One hundred miles east, to be precise, to Rathtrevor Beach Provincial Park and what turned out to be our kids’ favourite stop. And even I’d never seen anything like it. 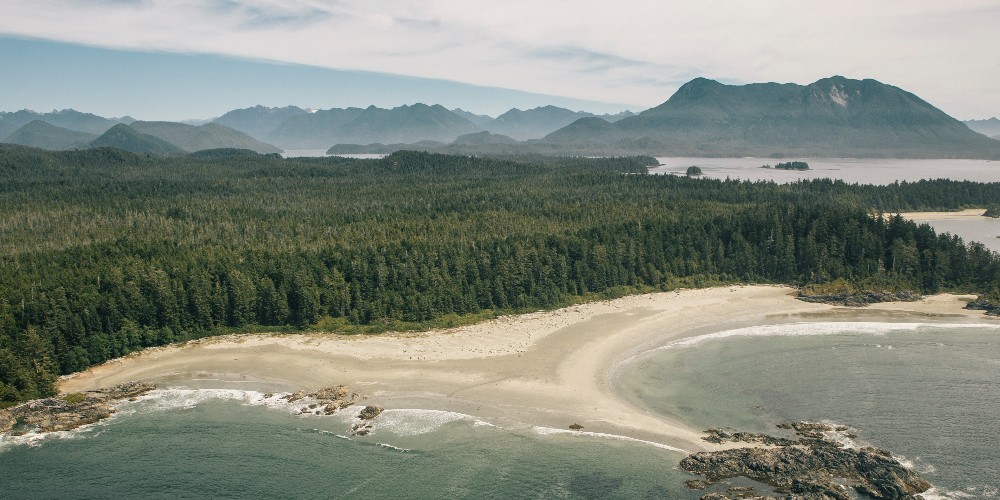 A childlike pace weaves into every day

What made it special wasn’t the frame of snow-fuzzed Coast Mountains filling the horizon across the Strait of Georgia. Or the forested trails or makeshift beach dens made from washed-up lumber along the tideline. It was the shallowness of the bay, which provided ego-boosting vim and vigour to my two-year-old.

At low tide, the sea recedes for nearly a mile, leaving an enormous crescent of sand to play in. At high tide, it creeps back in slow-motion, creating sun-glinting shallow pools and islands of sand surrounded by gently-swirling waters. Soon, most children on the beach were playing ‘king of the castle’, claiming kingdoms with spades and bucket crowns. Then miraculously, each island in this temporary archipelago slowly vanished as the water rose and mini-empires fell into the sea.

This slow, childlike pace seemed to be woven into everyday life here. But we had to leave Rathtrevor Beach — and Vancouver Island, for that matter — before the sun descended and, certainly, before our kids were ready to go. 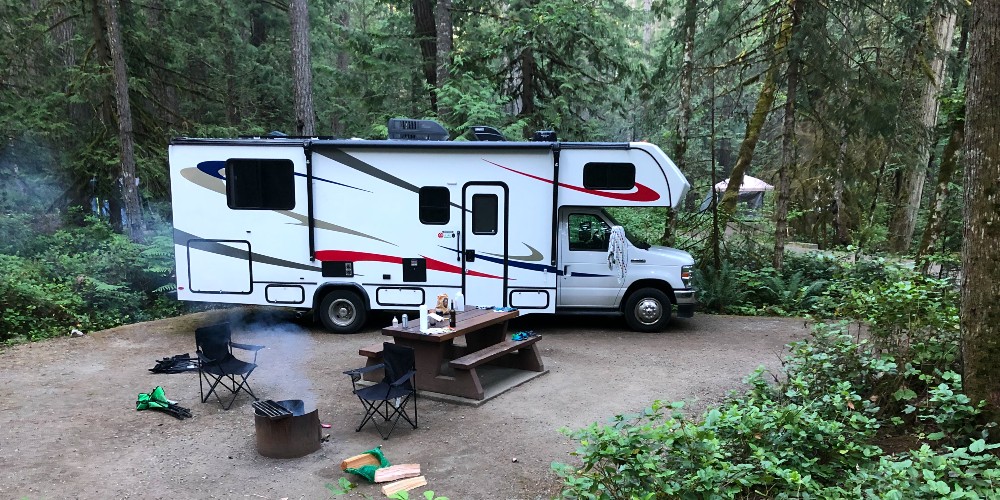 The MacEacheran motorhome away from home, Vancouver Island

We’d spent more than a week in the motorhome by this time, possibly enough to send most families into bloody fist-fights. Yet we underestimated how much we’d enjoy road-tripping from beach to surf shack to food truck to RV campground. How captivating we’d find the sands, the skies, the sunsets and the sizzled sausages. We’d loved Vancouver Island right from the start and didn’t want to leave. So when it came time to motor back to Nanaimo for our return ferry to Vancouver to hand back the keys of the RV, the tantrums finally kicked in. And that’s when the ice cream blackmail began.

How to plan a motorhome road trip on Vancouver Island

BC Ferries terminus at Tsawwassen is 40 minutes’ drive south of Vancouver city. The ferry crossing to Vancouver Island takes from 2 hours.

Alan Rogers Travel offer a 20-day British Columbia Sea to Sky self-drive motorhome tour from £4,199 per adult including international flights and a choice of family activities.

West Coast Aquatic Safaris offer a range of family-friendly tours in and around Vancouver Island.

Visit hellobc.com for information on Vancouver Island campgrounds and everything else British Columbia