Rhonda Carrier and family play, chill and eat at a resort loved by A-listers

Charlize Theron had just stayed with her own kids at the Elounda Peninsula on the north-east coast of Crete when we arrived – a fact naturally lost on eight-year-old Zac, who was too busy ogling our large private swimming pool, funky flat-screen TV that rose out of a partition at the touch of a button, and massive Jacuzzi tub to think about who else might be around. But even the luxuries of our vast suite couldn’t compete with the Kids’ Ark, which the Elounda Peninsula shares with its next-door sister hotels Porto Elounda Golf & Spa Resort and Elounda Mare.

Zac’s not always keen to go to kids’ clubs, but this one quickly won him over with its water park with water slides and two shallow swimming pools. The fact that the it also has its own Arsenal Football Academy was a big plus with my footie-mad son too, although in reality the pools remained the focal point with both him and his new friends. It was simply too hot to spend much time running around chasing a ball and the hands-on childcare staff were reassuringly mindful of this.

Zac didn’t elect to take part in the Elounda’s new junior ‘Strictly’ dance programme or the kids’ golf program on the nine-hole course, but he threw himself wholeheartedly into the Six Senses Kids wellness programme for ages five to 12. After taking part in a yoga class, he and his mates were led out in the Kids’ Ark’s own olive grove to be taught how to exfoliate their skin using wholly natural products (olive oil and sea-salt). Then they went out to pick rosemary from the on-site herb garden and used it to make their own delicious bread. Zac and I scoffed his together back on the terrace of our suite. 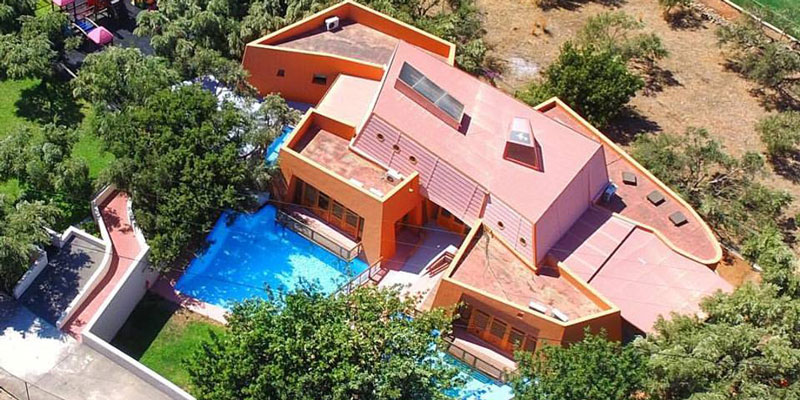 The Six Senses kids’ program uses holistic Apivita toiletries, which contain Greek plant extracts, organic essential oils and local bee products. This is the brand for the toiletries get in the suites too, and also for some of the treatments in the resort’s expansive, super-swish Six Senses Spa. It’s here that I submitted to a fantastically thorough deep-tissue massage and enjoyed a swim in the gorgeous infinity pool with its bay views while Zac romped at the Kids’ Ark.

Of course, time together is the most important thing when you go away with your kids, and though Zac took some coaxing away from the water park, we did hang out on the resort’s three beaches together and try out some of the enticing array of water sports – Zac’s favourite being the pedaloes with their own water slides for hurtling down into the sea. 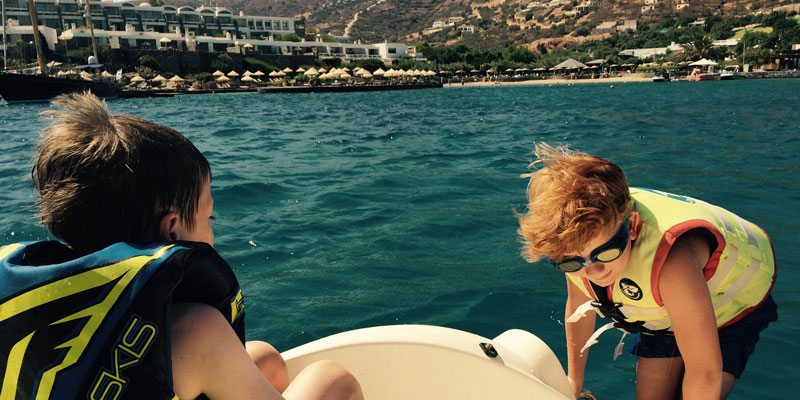 Zac and friend on pedalo

For eats, we tended to gravitate towards relaxed waterside Odysseas, where no one batted an eyelid as kids got up and down from the table to jump off the sea wall, feed their bread to the tiny fishes in the shimmering water, or hare up and down the beach.

There were child-friendly staples such as pizza, but Zac loved the simple Greek dishes that were served, including calamari with aioli, octopus, lots of cheese in filo pastry, Mediterranean dips with flatbreads, and of course ice cream aplenty. Breakfast was similarly good all round, with everything from healthy smoothies to local cake, plus the likes of pancakes with Nutella or local honey for kids. 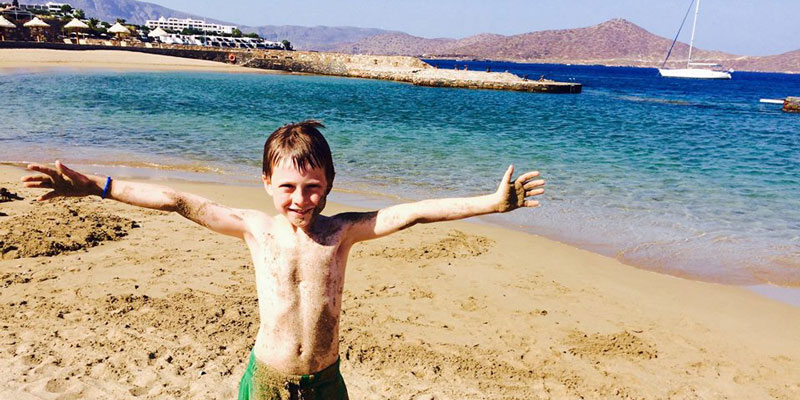 Zac on the beach

One evening we did part ways; me to enjoy the Cretan fine dining on offer at the Old Mill at the Elounda Mare Hotel (a stand-out dish being grouper fillet on Santorini fava with fried courgette flowers), and Zac for a children’s tea followed by a movie-and-popcorn night in the resort’s private cinema. On another night, an alfresco Cretan buffet was accompanied by lively local dancing that many of the kids joined in with.

The Elounda Mare, a favourite with Bono, is the a more romantic of the three hotels; though children do stay there, for younger ones it might be a bit sedate. Porto Elounda is the largest (at 123 rooms) and the most popular one with families. The Elounda Peninsula, being all-suite, is the most expensive and exclusive. Most importantly, combined they form a relatively large resort with many fabulous facilities but one that also manages to feel intimate and small-scale. That’s some feat, and  perhaps one reason why Charlize described her stay, in the visitors’ book, as ‘the most incredible vacation EVER!’.

The package includes complimentary Kids Ark access and a free lunch per adult.

Love the beach but not the crowds? Here are some of the best quiet beach holidays in Europe.

Luxury meets nature at Morukuru Ocean House, South AfricaCroatia with a toddler: a beach holiday at Valamar Resorts in Istria