Why Lucerne plus Bern equals the perfect Swiss family break

Switzerland is known for impressive Alpine scenery and charming cities. Family Traveller’s Harriet Mallinson mixed up both in one family break recently. Take a look at why she thinks Lucerne plus Bern is the perfect Swiss getaway with kids this year. 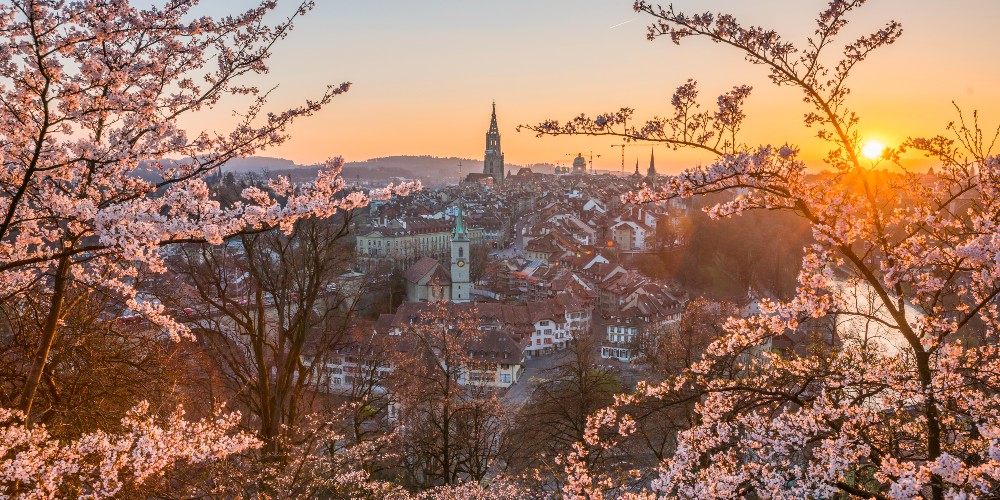 Rocketing up the side of a forest-covered mountain in a glass box, I was stunned as an awe-inspiring landscape of cyan waters, verdant fields and tiny villages opened up before me under an azure sky.

Sounds like the pathway to heaven? Frankly this corner of the world – Lake Lucerne in central Switzerland – might well be akin to the promised land. But I was in fact ascending Mount Bürgenstock in the highest exterior elevator in Europe – The Hammetschwand Lift  – and encourage anyone holidaying in Switzerland to do the same.

The 152.8m high lift dates back to 1905 – don’t worry it’s been modernised since – and takes visitors to one of the most stunning vistas on earth. On one side was the beautiful, clear lake itself and on the other nothing short of an alpine idyll. Luscious green fields rose up to the meet the mountains, which in the distance, were blanketed in gleaming snow. Long lashed cows grazed right in front of me, the bells around their necks creating a surprisingly charming chorus and I almost expected Heidi to come skipping towards me. 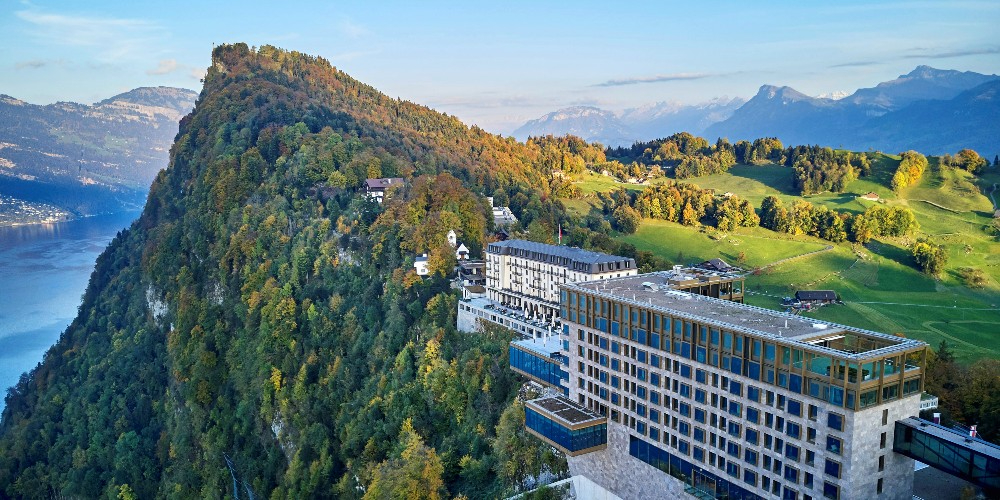 If you want to soak up the scenery overnight, you can also enjoy these breathtaking views from nearby Bürgenstock.  This historic resort complex first opened in 1873 and over the years Hollywood royalty from Sophia Loren to Audrey Tatou has stayed here. Many listed elements from its 50s and 60s heyday still remain, but the contemporary five-star Bürgenstock Resort is now the crowning jewel. Its floor to ceiling glass flanks afford incomparable vistas amid elegant, new design, whether you’re dining, at the spa or in your room  – be it from the bed, bath or toilet.

All hotels rooms are designed for two adults and one child, although many suites accommodate up to two children. However, for larger groups, the Lake and Mountain View Family Suite allows for four adults and up to two kids. 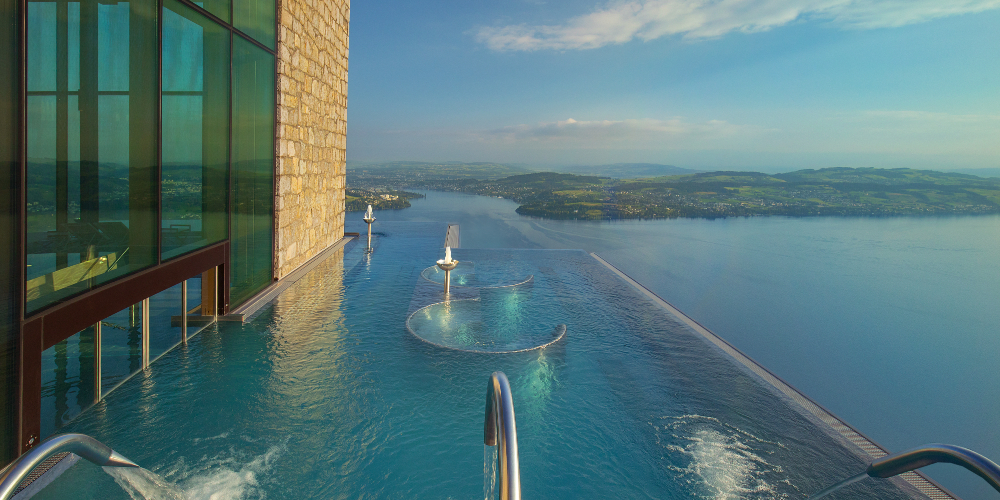 Luxuriate in one of the largest spas in Europe

To really absorb all the view, head to the spa – it’s one of the biggest in Europe – and take a dip in the incredible infinity pool. Never have I seen a more superior outlook. From the pool you can admire the lake, studded with sailing boats carving through the liquid velvet aquamarine. Mount Bürgenstock itself is also part of the view and private planes and helicopters cruising through the air add another visual dynamic. The resort has five helipads should you want to avoid the option of taking a catamaran from Lucerne or the traditional funicular ride up the mountainside.

When your fingers start to wrinkle, head inside to explore the rest of the spacious spa. There’s everything from infrared cabins and nap-pods to numerous saunas and steam rooms all boasting different infusions.

Missed your morning coffee? Leap into the 18C cold plunge pool before hopping into the 36C jacuzzi to really get your skin tingling. A favourite of mine was the saline floating bath where you experience a feeling of weightlessness in a darkened room as you’re soothed by classical music.

Even children aren’t excluded from spa time at the Bürgenstock Resort. Splash ‘n’ Flash allows kids to enjoy the pool at certain times of the day.  Or, as a real treat, you can book them into the “Little Spa” which features fruit facials, Fairy manicures and Princess pedicures. 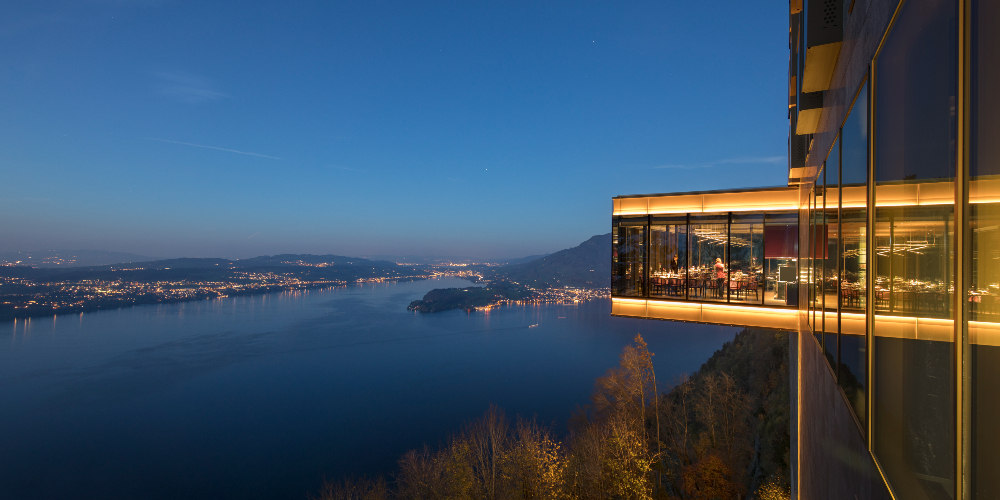 Remarkable restaurants with Lake Lucerne on the side

You’ll have likely worked up an appetite by now. The Oak Grill, serving up high-quality barbecue, greets you with the fragrance of a wood fire, so it’s like a family Christmas with none of the stress. This restaurant is also popular with children and if the weather’s nice, families can eat on the terrace in front of the Hollywood pool where starlets once cavorted.

The real star of the show, however, is Asian restaurant Spices, which plates up food from Japan, China and India against a backdrop of the magnificent lake. To the glow of the setting sun, I tucked into decadent sushi, think nigiri topped with caviar and gold flakes. Then it was on to tasty Chinese dumplings and the famous Chicken 65 dish. The latter is not for the fainthearted and the waiter sagely provided raita to fight the Indian spices. To finish up, dessert came in a coconut bowl emanating plumes of dry ice – it’s not just the panorama which is aesthetically pleasing here.

Food doesn’t just have to be eaten at the Bürgenstock Resort, you can also have a go at making it yourself. Dairy lovers will enjoy the range of Swiss foodie activities from cow milking to cheese creation. I couldn’t resist trying the cheesemaking workshop. I began with the traditional method of stirring milk in a giant bronze cauldron to break up the curd. Then, after waiting patiently, I sifted out the fruits of  my labour and placed them into a large, round cheese mould under the instruction of maestro Christian from Jumi Cheese.

The hard part done, we sipped pink champagne and tuck into all manner of other cheeses. There was even one infused with cannabis and another garlic offering created entirely by accident. Apparently it was left to mature too long, however, it’s now perfect for shaving over pastas or salads.

Bürgenstock entertains kids outdoors, indoors and down on the farm

Family activities at the Bürgenstock resort are in abundance. You’ll find “choco” classes with pastry chef Damien as well as visits to a nearby farm. The resort also shows kids’ films at its cinema and offers junior mixology lessons – don’t worry, it’s more milkshakes than martinis.

For something a bit livelier, try tennis. The outdoor court is transformed into an ice rink during winter, but in summer offers a range of tuition, including classes for children. Kids can also get into yoga with sessions tailored to the way they naturally learn and play. Plus there are family walks, bike tours, hikes and more.

The free Kid’s Club at the Bürgenstock Resort welcomes children aged between three and 12 years. Expect dolls, cuddly animals, mini snooker, mini foosball, air hockey, slides, oodles of toys and even PlayStations. Play areas are imaginatively decorated and it’s fully supervised, should you wish to go off and do your own thing. 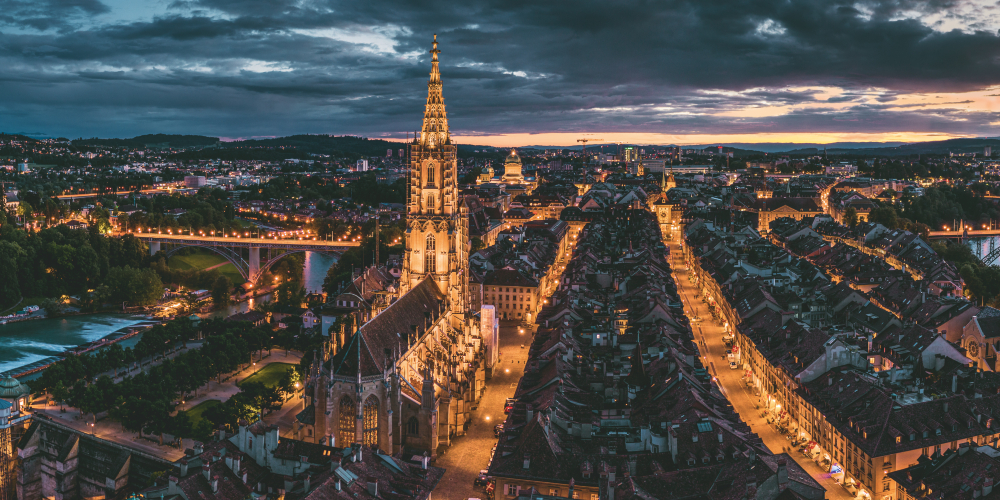 Bern Minster towers over the capital of Switzerland

Hop the train from Lake Lucerne to Bern

Once you’ve had your fill of the countryside, hop on the train to Bern which is less than an hour and half away by rail. You can buy a ticket which gives you unlimited travel for three or six days and I can highly recommend that option if you plan on hitting up multiple destinations during your family holiday.

Many people don’t realise that Bern is the capital of Switzerland and it’s easy to see why. This city is tiny, yet also pretty as a postcard; all colourful shutters, frescoed walls and cafés spilling out into the streets, finished off with a very calm vibe indeed.

The benefits of visiting en-famille are many. For starters, the diminutive size means getting lost is almost impossible, plus it’s highly pedestrianised – just watch out for the trams. What’s more, covered walkways along shopfronts are plentiful and provide ideal shelter from inclement weather. 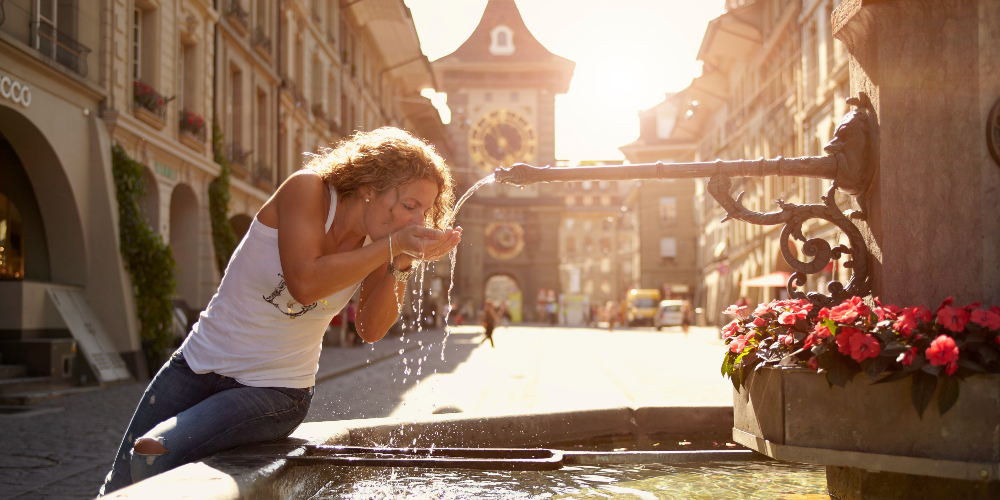 Amazing sights to spot in the capital of Switzerland

Bern is famous for its fountains . Not only can you drink the fresh water spurting forth – please do, it’s delightful – but all 11 are gloriously decorated. Figures standing on the central column range from a piper accompanied by a goose and a monkey to a man brandishing a sword beside a bear cub. One fountain even sports a child eater!

Similar sights can be seen over at the beautiful gothic sandstone cathedral, Bern Minster.  The doorway is intricately carved to depict both heaven and hell, and getting kids to spot its bizarre details is a lot of fun. Those with a penchant for the sinister might spy the little devil snipping of men’s nether regions or chaps hanging from the gallows by their tongues amidst a fiery inferno.

Other highlights to keep children entertained include the main square where 26 water jets spurt sporadically into the air to squeals of delight from little ones. You can’t miss the majestic Federal Palace, built at the turn of the 20th century and marked out by a gleaming gold cross atop its dome. Get older kids to guess how much precious metal is up there? The answer’s a mighty 700g! 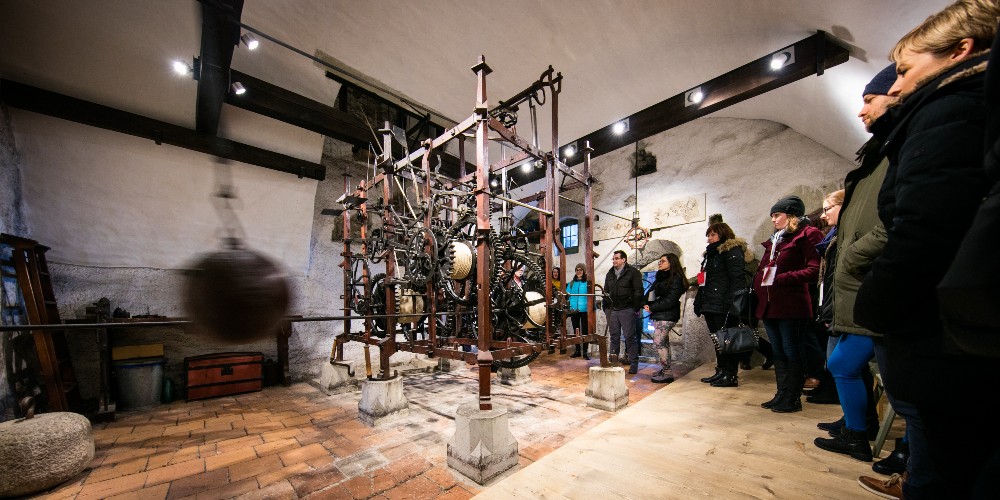 If kids want to see bears, Bern does not disappoint

Of course, you can’t go to Bern without seeing the bears it’s named after. According to legend, the founder of the city said he’d name it after the first animal he hunted – suspicious it just happened to be such a majestic beast but hey-ho. Real bears were later introduced by mercenaries who brought them back from fighting in Navarra, Spain. And today, two can be visited by the banks of the river in Bern, both safely enclosed, fear not. You might even get to see the animals in the original bear pit!

Don’t miss the incredible clock tower whatever you do. By taking a tour with Visit Bern tourist office you can climb inside and witness its 15th century mechanism at work as the astronomical clock strikes the hour. On the inside, it’s a whirlwind of cogs and pulleys, while on the outside you’ll be enchanted by dancing bears, a cheeky fool and the crowing rooster. 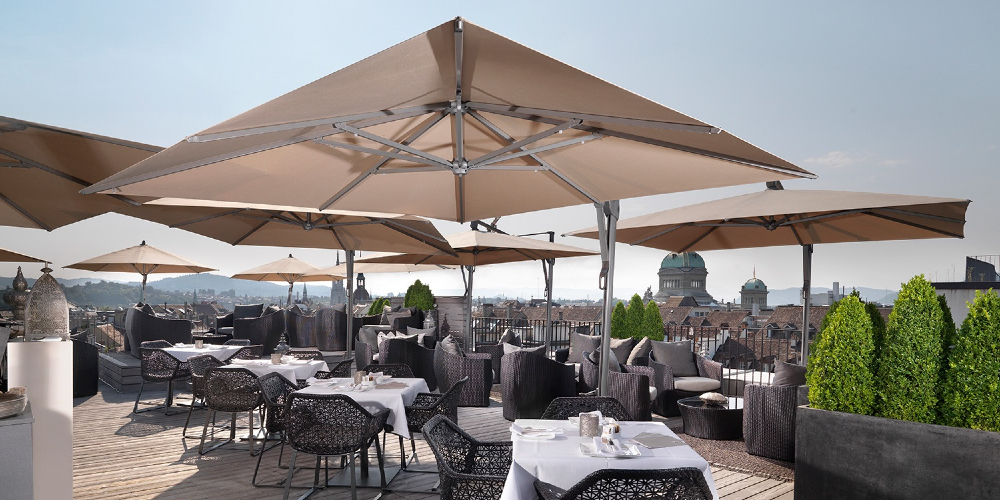 Where to stay on a family break in Bern, Switzerland

As for where to stay in Bern, I enjoyed an overnight at Hotel Schweizerhof Bern & Spa which features a sky terrace with beautiful views over the city and surrounding hills.

This five-star hotel offers both two and three bedroom family suites with separate living areas. My spacious quarters boasted a comfortable bed – a delightful space to tuck into breakfast and I can highly recommend the shakshuka. The bathroom was lovely too, with his ’n her sinks and a vast bath!

Food is done excellently downstairs. Don’t miss the delectable Korean chicken in the lounge or the seriously tasty schnitzel in Jack’s Brasserie. There was also a delicious beetroot tartare paired with the most divine apple sorbet (why is this flavour not done more?). However, the piece de la resistance was the Bern Bomb. Perfect for groups, this nutty, meringue-y business is infused with alcohol and set aflame like a Christmas pudding by the side of the table; guaranteed to invoke oohs and ahs.

Yes, this part of the world will keep holidaymakers of any age delighted. Just don’t weigh yourself when you get back!

Planning a family break in Switzerland

How to get to Bürgenstock

Bürgenstock is an hour’s drive south of Zurich Airport.

Find out more about Hotel Bürgenstock.