October half-term is a great time to discover kid-friendly London hotels. One of the world’s most popular cities, London is less busy at this time of year. The weather is usually still nice and you can often find exciting hotel packages – as well as savings on major family attractions. 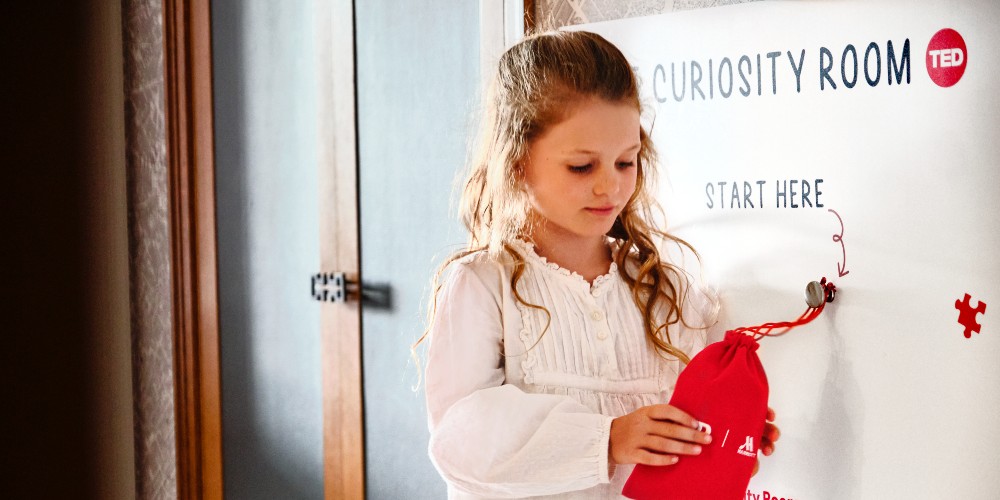 One of the keys to a successful London trip with kids is picking a central hotel. Although it’s easy to get around using the tube or buses, a central location makes exploring on foot much more doable – with the help of google maps of course!

There are lots of factors to consider when finding the right family friendly hotel for your London trip. London hotel rooms are generally smaller, so finding somewhere with enough space is important. Affordability is important too, as family attractions can be expensive, and you may choose not to spend much time at your hotel, so make sure it’s good value. 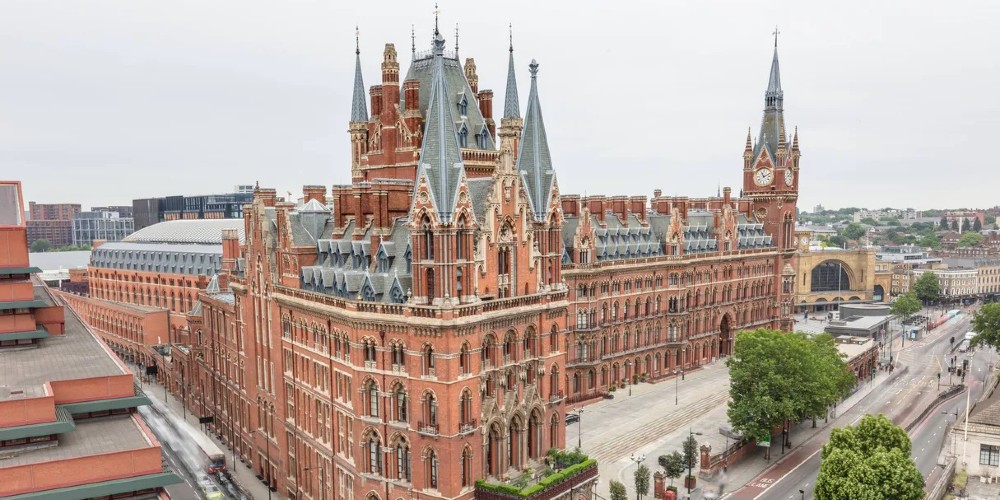 Our pick of London hotels this October half term

We chose  St Pancras Renaissance Hotel London, right next to Kings Cross Station. This is one of the most iconic London hotels, and that’s reflected in the price. It’s not cheap. But it is a legend and even younger kids will be impressed. My teenage daughter was fascinated to hear that Harry Potter and the Chamber of Secrets was filmed here, and when you see the building it’s hardly surprising.

But we weren’t here to see wizards. We chose this hotel because of its Railway Children Return Family Stay package, which celebrates the sequel to one of the most beloved British family films of all time. I grew up with The Railway Children and it was a firm favourite in our home, so I brought my mum along too so we could enjoy the experience together. We stayed in a luxury Chamber Suite and started our break with a delicious Railway Children Return Afternoon tea – themed for both adults and kids. Plus, we also had access to the pool and spa during our trip, what a treat! 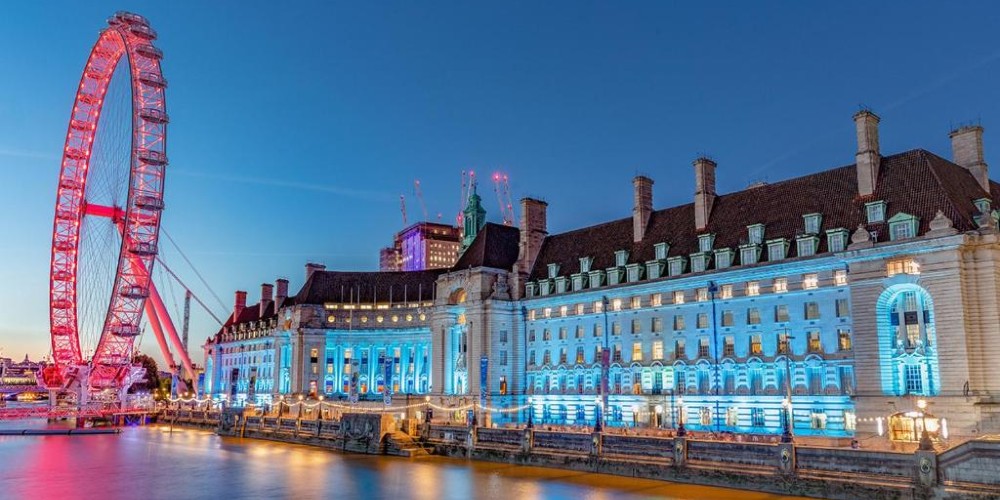 From immersive adventures sparking curiosity to roar-some family stay packages and stunning culinary experiences, we’ve rounded-up some of the best family breaks at Marriott Bonvoy’s collection of London hotels this October half term. 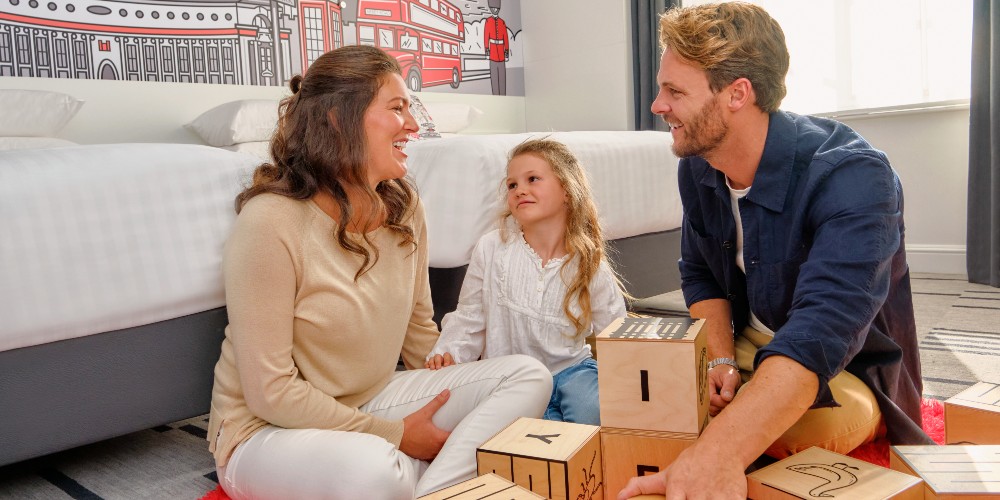 Experience a one-of-a-kind room crafted by TED at London Marriott Hotel County Hall. Sparking curiosity for families and friends aged seven and upwards, this immersive adventure starts immediately upon arrival in your room: actually a puzzle waiting to be solved. Intriguing elements, tricks and hidden messages are woven into the décor and families have to hunt for clues.

Book your stay at The Curiosity Room by TED from £800 per night, for a minimum two night stay for up to four guests. In addition to puzzles and custom-designed artwork to take home, dinner, and dessert in Gillray’s Steakhouse & Bar is also included.

Book your family stay at The Curiosity Room by TED 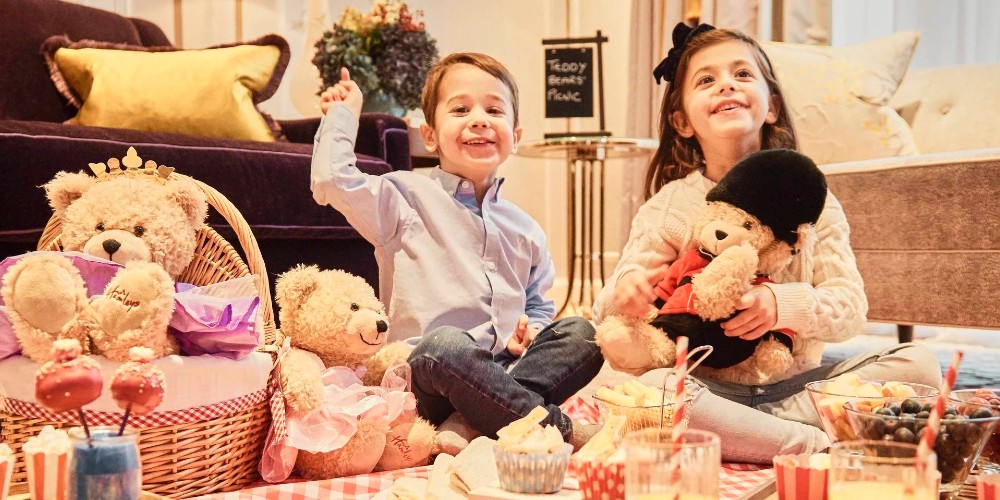 Located in the heart of the city, London Marriott Park Lane Hotel features an amazing pool and is just a stone’s throw away from six royal parks. The Hamleys Teddy Bear Butler Experience lets kids pick their British bear from the in-room teddy bear menu. Then they can enjoy family activities, including behind the scenes shop experiences at Hamleys or a Teddy Bears’ picnic in your suite. Available until 31 December 2022, from £1,799 per room, per night. 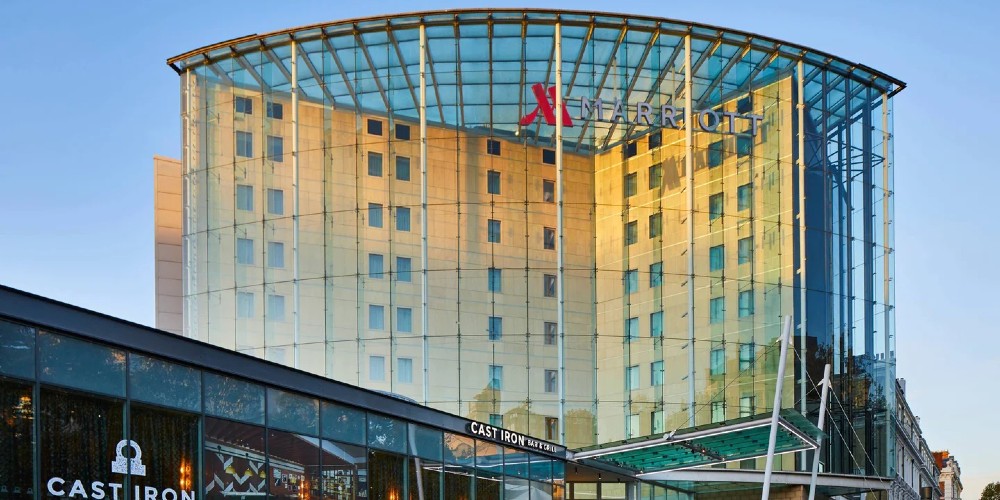 Enjoy a roar-some family package this half term to celebrate the return of Dippy the Diplodocus to The Natural History Museum. The package is set to thrill young explorers with a variety of dinosaur themed fun. Kids can look forward to a dinosaur backpack; dinosaur build and colour activity set; The Queen and Mr. Brown: A Day for Dinosaurs book; Kensington explorer map and a dinosaur chocolate sundae in Cast Iron Bar and Grill. Available until 31 December 2022, from £399 per room, per night. 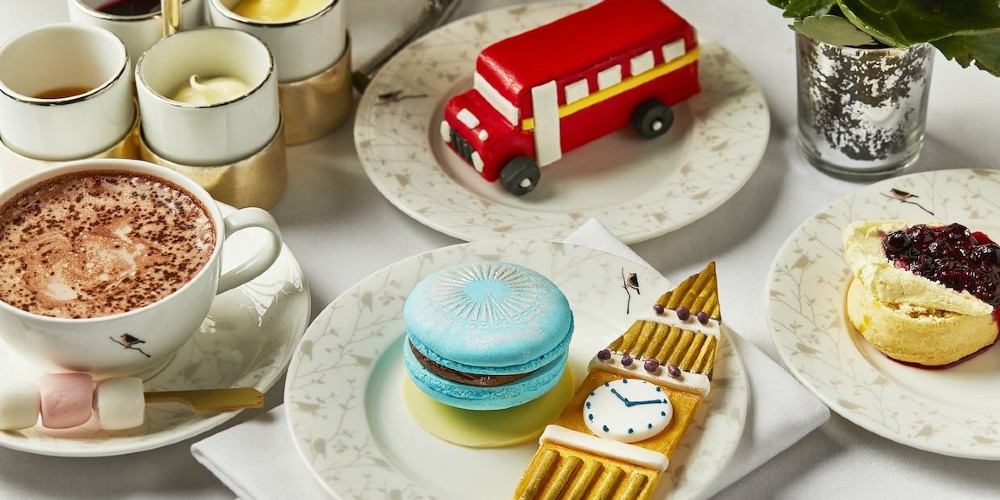 One not to miss – Sheraton Grand London Park Lane has unveiled its very first children’s Afternoon Tea inspired by London’s most iconic landmarks. The Afternoon Tea brings to life playful pastries of the London Eye, London Red Bus and Big Ben. It also features bite-size sandwiches and freshly baked scones paired with either hot chocolate or tea. The London Kid’s Afternoon Tea is available daily from 2pm – 6pm, from £25 per child.

Book The London Kid’s Afternoon Tea this half term 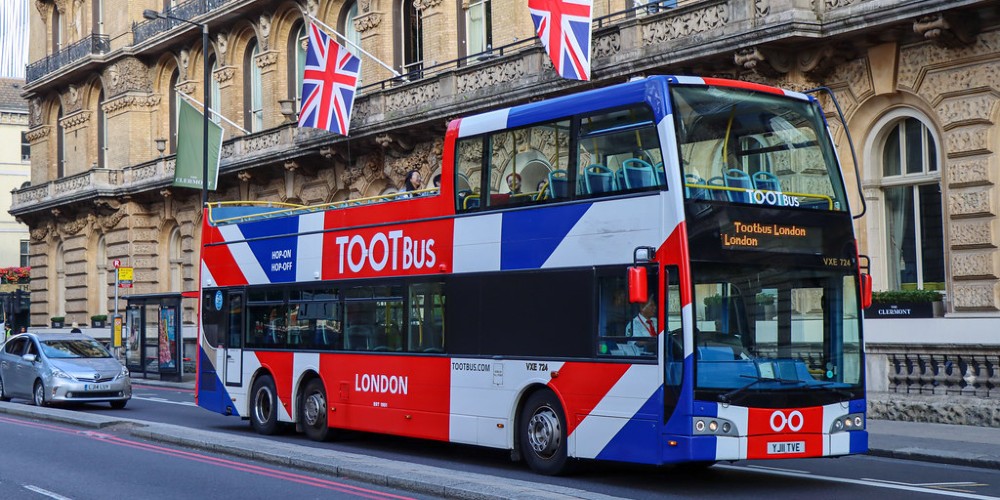 Walking around London during October half-term is a great way to uncover some of the wonderful city’s secrets. But there’s no question that the best way for families to explore is on one of the amazing hop-on hop-off bus tours. We chose a Tootbus tour which has a kids tour option with guided commentary. My little boy is four and was so excited to see the London Eye and Houses of Parliament as well as Big Ben, Westminster Abbey and Piccadilly Circus. The open-top bus was great fun and he was really taken with the guide who made every landmark seem even more dramatic and exciting. For October half-term, Tootbus has a Halloween tour with spooky stories told by the live guide, and kids are even encouraged to dress up! 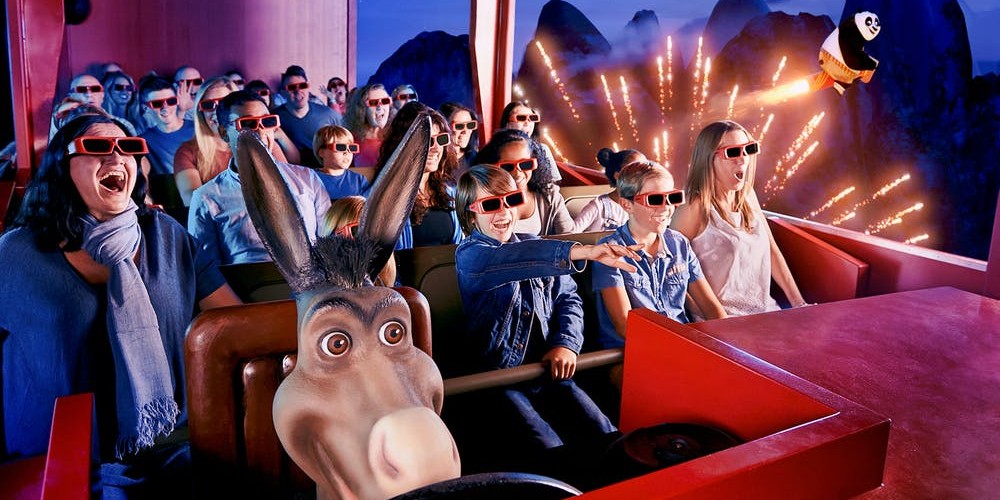 We tried to cram in as many of the attractions as we could over our short trip, alongside a little shopping to keep our teenager happy! Top of the list for us was Shrek’s Adventure! which we’d heard so many good things about. It isn’t an all day attraction, but you will be there for a couple of hours. So it’s a great option to fit in between other activities. Plus, it’s on the South Bank next to the London Eye, London Dungeon and SeaLife Centre. Organise yourself and you can see them all in one day!

Shrek’s Adventure is a 4D themed walking tour which takes you right into the world of Fairytale land. The target age is 6-12 and I was a little nervous that Ronnie would be spooked, but he absolutely loved it. Each part of the attraction is basically a show, telling the story, all the actors are so talented, and you really do feel like part of the performance. We were in a small group of about twenty people and as we made our way round everyone was encouraged to join in, adults and children!

The tour starts with the magical 4D bus to take you to Far Far Away. Then it was on to Shrek’s Swap and Rumplestiltskin’s Carriage, where The Fortune Teller showed us inside her crystal ball. Doris the bartender in the Poison Apple Pub had everyone in stitches, before we headed to Farquaad’s Dungeon to rescue Pinocchio. Another highlight was the Mirror Maze of Insanity. Our group took the wrong path many times and ended up being rescued by Sleeping Beauty: all part of the fun, nothing to be concerned about! Be prepared to sing, dance and be silly. We found it was a really uplifting experience and a great way to have a good giggle with your kids. 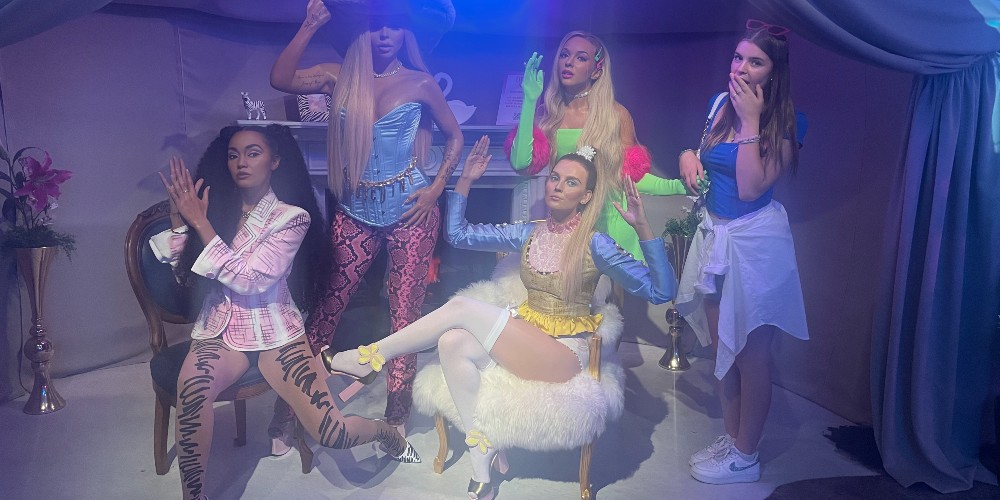 Book Madame Tussauds online and save up to 10% on tickets

No sightseeing trip to London feels complete without a visit to Madame Tussauds. I had been many moons ago when I was at school, so I was excited to see what the attraction had to offer in 2022. My teenage daughter was particularly keen to visit and take selfies with the stars.

One downside to Madame Tussauds is how popular it is with tourists. We passed by the day before and the queue was winding down the road, so we decided to buy a fast track ticket. This proved to be a godsend because we walked straight in. I had actually forgotten how realistic the figures were; some of them looked so real it was creepy. We really loved the interactive areas. And my Spiderman-mad four-year-old, was in his element in the Marvel 4D cinema experience, which featured in-theatre effects like wind, water sprays and some quite frightening tremors. We also enjoyed the taxi ride, which took through a tour of London’s history in a Black Cab.

Pre-book Madame Tussauds tickets online and save up to 10%

Afternoon Tea in The Hansom is available per guest, from

Matilda the Musical: the perfect end to a family day out in...