Glamping on a goat farm at Dandelion Hideaway

The welcome gestures said it all when we bowled excitedly into our nostalgia-filled canvas cottage at Dandelion Hideaway. Fresh farm eggs in a cute wire basket on the solid oak dining table, a freshly baked Victoria sponge worthy of Mary Berry alongside a lacy jam jar vase filled with delicate japonica and a welcome note from owner and goat farmer’s wife Sharon Earp, handwritten on an F. Scott Fitzgerald postcard. You don’t get that level of detail in a five-star hotel, nevermind a glamping site. At Dandelion Hideaway, as we were about to find out, it’s all about the detail…and lighting fires, but more of than anon! 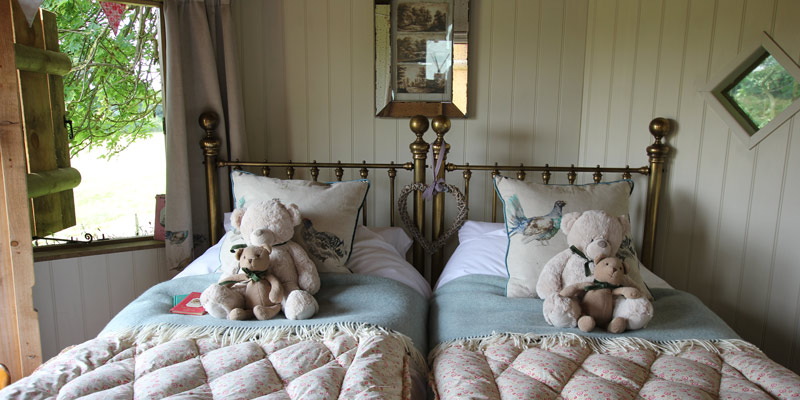 Teddies on the bed at the beautiful treehouse at Bluebells tent

Tucked away in 200 acres of rolling Leicestershire countryside, close to The National Forest, Dandelion Hideaway comprises of just six large canvas cottages in the vast Spinney’s Field, all part of a wonderful goat farm run by Farmer John Earp who takes you over the bumpy terrain in one of his many impressive farm vehicles to deposit you at your spiffy tent. This place is glamping with bells on. 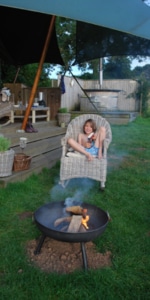 There’s a Robert’s radio tuned into Radio 4, there are those old Observer Books of Butterflies to teach your kids about the things they can see outside right the tent, there’s an outrageously pretty roll top bath, piping hot water on tap and squillions of gorgeous candlelit lanterns to create a magical atmosphere. Hell, there’s even a drinks tray with a choice of sherry, Pimm’s and Advocaat, a tipple I haven’t seen since my granny offered me one a squillion years ago. 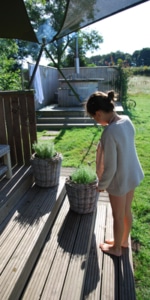 But the thing I love most about Dandelion Hideaway is lighting fires! It’s engrossing and immensely satisfying to get the big range going that heats the canvas cottage and to cook something in its iron belly. It’s a great place to warm towels by the fire, but don’t hang things too close. My prize pair of Boden cashmere socks ended up in cinders due to over zealous drying! Staying in ‘Bluebells’ cottage, we also had the use of the wonderful outdoor wood fired hot tub, a glorious creation on its own raised wooden terrace with a very Dandelion Hideaway touch of candles and a heart shaped mirror and hooks on the wooden wall behind. The children loved filling up the tub with cold water by hosepipe (cue water fight), and bringing logs from the log store just behind our cottage for me to get a good fire going in the hot tub burner. Congratulating myself on achieving 40 degrees, it’s fabulous to climb into in the early evening with a glass of bubbly or lemonade and watch the sunset, bats swooping overhead. I have to admit at times, I felt like a crazy woodland pyrotechnic, running between cottage range, hot tub burner and outdoor fire pit we had one night to toast marshmallows. 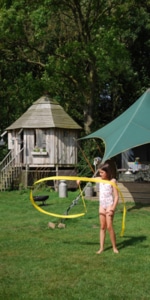 Bluebells also comes with Bluebell’s Nest, a fairytale cabin on stilts which sleeps two – and is perfect for teenagers to claim as their own, whilst parents sleep in the main tent. The thing about Dandelion Hideaway is that you really do get back to simple pleasures. My kids, aged 12 and 9 built dens in the field out of the gorgeous old fashioned throws, endless cushions and old fashioned iron chairs (sorry Sharon!), and sat under their canopy engrossed in their books. We brought along their 24-year old cousin, Zoe, who embraced the entire glamping spirit giving them wheelbarrow rides and dancing on logs when required.

In the morning, there were no thoughts of iPads, just a rush to get to the hen house first to collect fresh eggs. Sharon (below left with Scarlett) is a font of information and hosts lively tours of her hen house giving tips on hen keeping. She lets the kids hold the birds and explains that the day-to-day hybrid hens, which lay eggs most days, are known as Warren hens. Most rare breeds only lay around one egg in three days. The most impressive of these are the big fluffy Buff Orpington’s, known as the most maternal and gentle of all breeds, along with the pretty French Marans with a black and white herringbone pattern which lay very dark eggs. 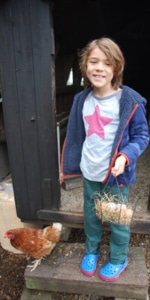 Fin (right) is most taken by the Legbar hens that lay blue eggs. Apparently duck eggs are good for cakes. I wonder if that was why our Victoria sponge tasted so good? Sharon also recommends a visit to the Fur and Feather Market in Melton Mowbray on a Tuesday morning, which sounds fascinating in thoroughly medieval way and is one of the oldest kinds of market in the country. You can buy a cockerel for just 50p which seems shocking. 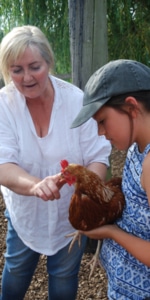 There’s plenty of opportunity to peep into the life of a working goat farm here. Farmer John invites guests to milk the dairy herd of goats and taste the fresher than fresh milk. Guests are free to say hello to the goats whenever they fancy as they’re there right on the farm. At any one time there are up to 250 little ones in their pens, arranged according to the date they were born. Some today! Scarlett and Fin love the way they nibble their fingers. Sharon let’s children groom her collection of 13 Shetland ponies from Maggie, the oldest at 23 years to Dandy the youngest at 3 who has a little bit of attitude. Even the little kids are taller than these tiny, wide ponies. After brushing in the stable yard, the kids help to paint the hooves with oil and the best part, lead them back into the field. In wise country folk speak, Sharon says Lulu’s winter coat is growing already, a sign that we’re not going to have an Indian summer!

The kids would have been happy never to have left Dandelion Hideaway the entire week, but it’s a parent’s duty to drag them out on a few excursions. And happily close by, you can travel forward in time with a visit to the National Space Centre, and back in time at Bosworth Battlefield Field Heritage Centre where kids get to weigh up the evidence as to whether Henry Tudor or Richard III was the true villain. The location of the battlefield was only pin pointed in 2010 and Richard III’s remains found in 2012, so this is exciting historical stuff. A highlight here is a falconry display by Becky from Hawkwise Falconry, where we got to fly a Harris Hawk called Splat and learn how birds of prey were used to catch food in medieval times. 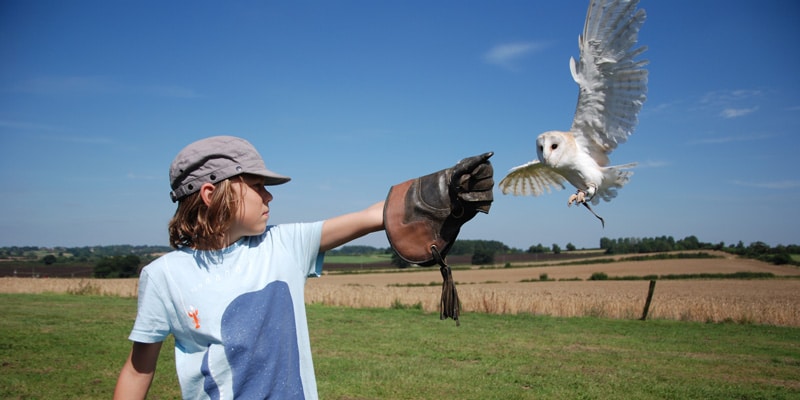 To stock up on supplies, we make it to Market Bosworth a couple of times to the supermarket and the Rose & Radish green grocer. But most of the time we rely on Sharon’s Old Cow Shed honesty shop in the farmyard – is a treasure trove packed with delicious local produce, beautiful home-wares and lovely traditional children’s toys. 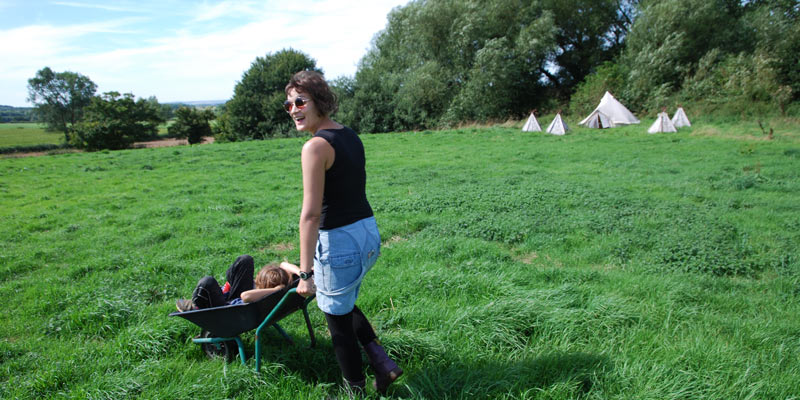 At night it gets pitch black when all the oil lamps have been switched off and the kids have delighted in suffocating the candles with the old fashioned snuffer. Fin says the rain on the tent sounds like a giant rolling over massive bubble wrap. It’s pretty noisy, but we’re snug inside. On our final morning Fin rises early in search of the elusive blue egg. He’s obviously listened to everything Sharon has told us. He later says he’d like to be a farmer and hang out at the Fur and Feather Market. Scarlett gets out her watercolours and paints a speckled wood butterfly we spotted at Bosworth Field. We captured it on camera and looked it up in the 1938 Observer Book. It’s like every parent’s dream come true. And you get to light fires! 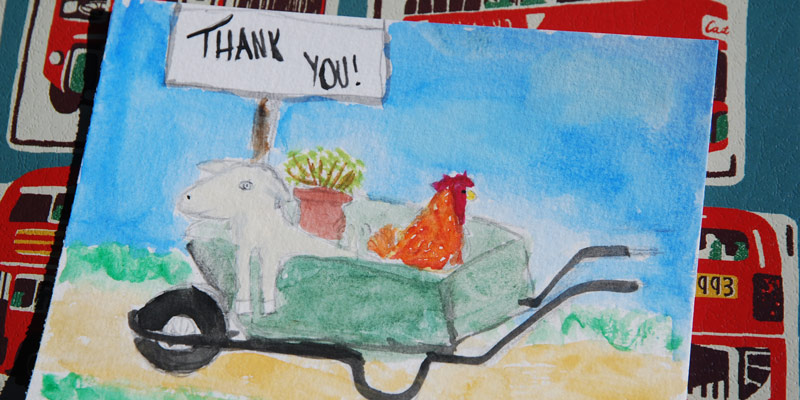 Dandelion Hideaway: Weekend £575 – £750, Mid-Week £500 – £700, Full Week £725 – £1,150. Five tents sleep up to six. Bluebells sleeps up to five with one king size bed and one-day bed in the main tent, plus twin beds in Bluebell’s Nest, perfect for older children in the summer months. The price includes: Farmer John’s welcome farm walk and talk, Goat Milking with Farmer John, meet the Shetland Ponies; pony grooming & leading, introduction to Hen Keeping and all fire wood for wood burning stove and group camp fire. In the summertime, there’s a private Outdoor Camp ideally positioned on the hilltop in the Spinney Field, perfect for Children’s ‘lookout duties’, secret play and discovery. On booking, families can also arrange the hire of highchairs, travel cots, mini tractors and fire pits. Farm suppers such as a hearty sausage casserole are available to book on request from £45 feeding a hearty five adults.

Check out Idaho Cabin in Sussex for children’s woodcraft workshops