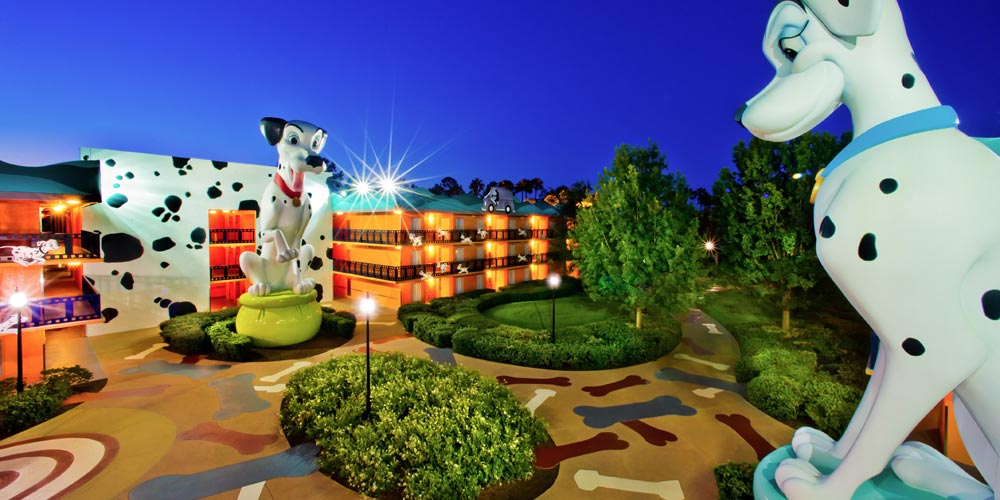 Disney’s All Star Movies is a huge 5,546-roomed resort with a laid back and fun-filled vibe, ideal for families ready to get into the spirit of Disney. Disney’s All Star Movies celebrates the magic of Disney films. Families will meet some of their favourite characters here from the Dalmatian pups to Woody and Buzz from Toy Story. Central to the resort is a vast Fantasia-themed pool with water sprays. There are also two heated children’s pools and water play area to enjoy, plus a playground, games arcade, one-mile jogging track and food court. The resort is based at Disney’s Animal Kingdom Resort area but guests can enjoy free Disney bus transportation to other major theme parks too. Private ‘Minnie Vans’ can also be organised for a stress-free trip around the attractions. After a day at Disney, guests can either enjoy in-room pizza delivery or head to the outdoor cinema for movies under the stars. 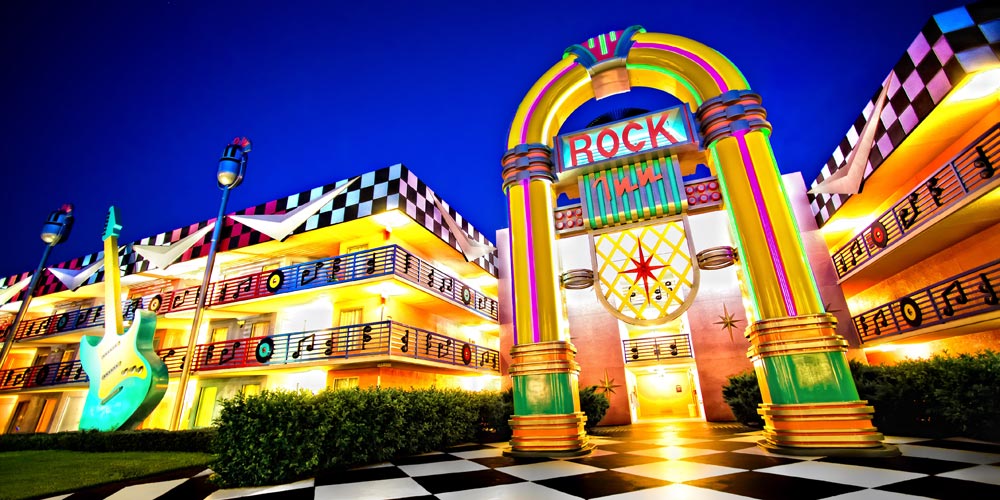 Disney’s All Star Music is a great value three-start resort based right in the action at Walt Disney World. This musically-themed resort has five areas; jazz, calypso, Broadway, rock n’ roll and country, to get families revved up into the Disney carnival atmosphere. Even the two large swimming pools are shaped like musical instruments. Other amenities at the hotel include a pool bar, one-mile jogging trail, playground and games arcade. Movies under the stars are organised for some magical evening entertainment. Disney’s All Star Music has modern accommodation, and plenty of it. There are 1706 rooms at this super-sized resort. Spacious family suites are available with separate living area, kitchenette and two bathrooms. The resort has a large food court for self-catering. In-room pizza delivery can be organised too. Perks of a stay at Disney’s All Star Music include free bus shuttle, extra magic hours at the resort, fast pass and free parking. 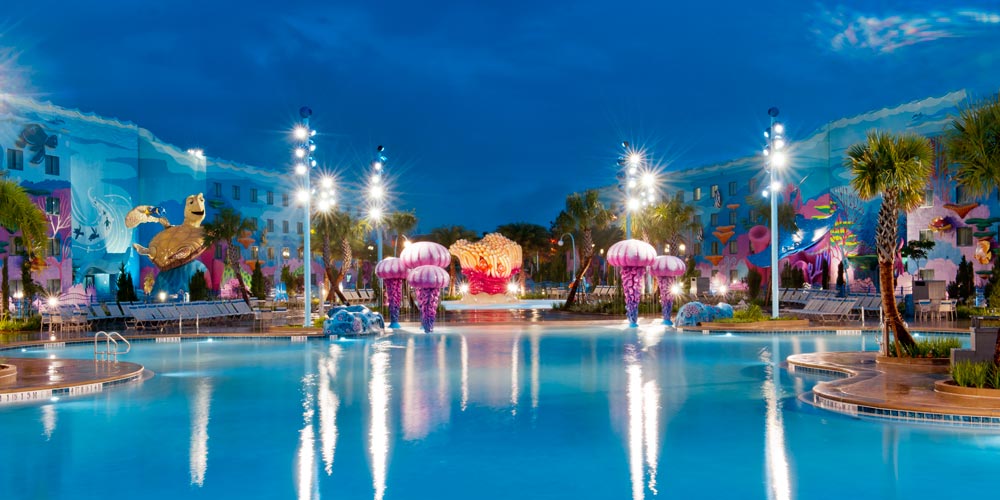 Disney’s Art of Animation resort features some of Disney’s top Pixar movies; Finding Nemo, The Lion King, The Little Mermaid and Cars. There are 2,000 rooms here and many of them are themed to further transport the family into a Disney world of imagination. Family suites contain a living room, two bathrooms and a kitchenette. New for autumn 2019 is a magical gondola system which will whisk families away from the resort up to Epcot and Disney’s Hollywood Studios. A complimentary shuttle bus also operates or families can choose to pay extra for a private ‘Minnie Van’ to take them door-to-door. Disney’s Art of Animation resort contains the largest swimming pool in the region, inspired by Finding Nemo. There are two smaller and quieter themed pools nearby too plus an interactive water play area for younger guests, playground and games arcade. 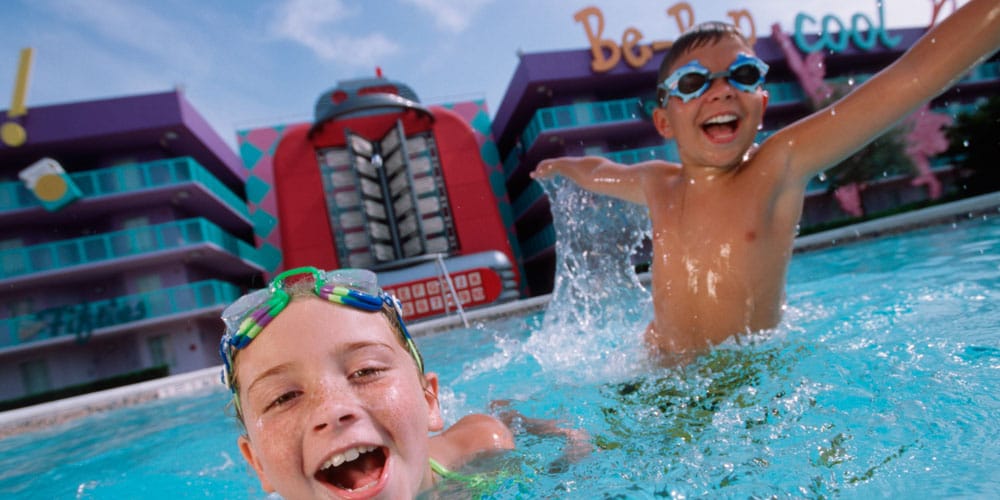 Three-star Disney’s Pop Century features oversized memorabilia and themed swimming pools to whisk the family back through different decades. There are five zones here showcasing icons from the fifties to the nineties including yo-yos, Rubik’s cubes, rollerblades and Play-Doh. A central 1960s ‘hippy dippy’ swimming pool has water jets galore, and there’s two quieter pools plus a children’s splash pool nearby to cater for younger members of the family. Head to the food court for dining options, or choose to relax indoors with an in-room pizza delivery. Disney’s Pop Century puts on free bus transfers to the major Disney attractions and in autumn 2019, a new gondola system will be in operation to add a bit of sparkle to transportation. 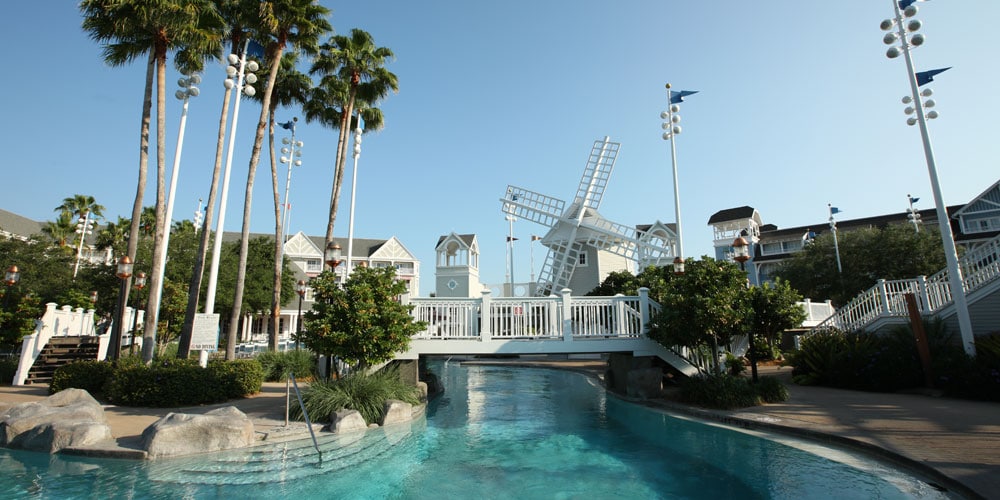 Families will feel like they are at the seaside at Disney’s Yacht Club Resort. This New England style resort has its own lake, Stormalong Bay, man-made beach and lighthouse. Guests can hire motorboats for a thrilling cruise along the waters, relax in a beachside cabana, go for a swim in one of the three pools or play a game of tennis or volleyball. The three-acre waterpark with pirate ships, waterslides of varying heights, lazy river, whirlpool spas and splash pool will delight kids, as will the mini Fantasia-themed golf course nearby. Children aged four to 12 can also sign up to a pirate adventure cruise, where they will take to the seas in search of treasure. Disney’s Yacht Club is walking distance to Epcot and short boat ride to Hollywood Studios, a fun activity in itself. Late in 2019, a unique skyliner service will be in operation to whisk families up to the theme parks via gondola. 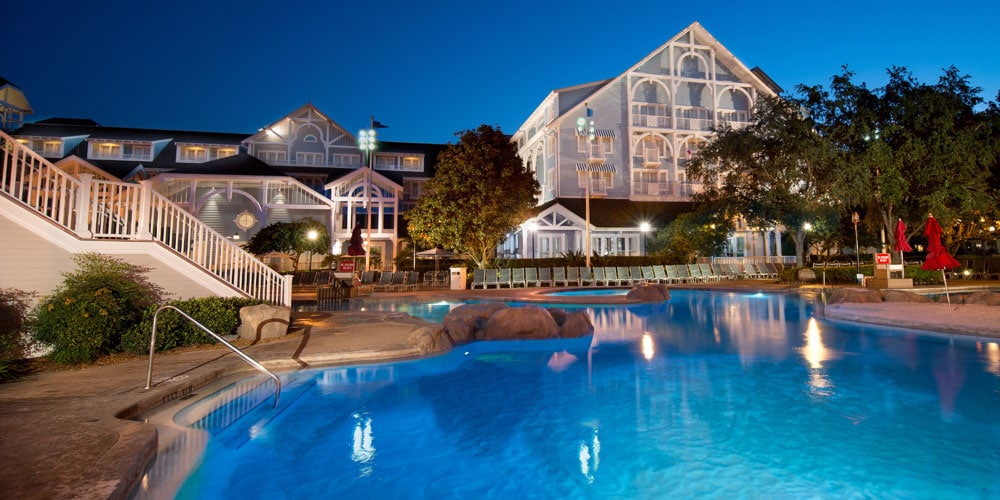 This New England style Disney resort has plenty to please families. Its central location is a big draw. Epcot is a walk away Hollywood Studios can be reached by boat, but if even that seems like too much effort, the resort can organise private driving in a Minnie Van service too. Disney’s Beach Club Resort is water park heaven, with plenty of pools, lagoons, shipwrecks and slides in Stormalong Bay, all Disneyfied to the max. Goofy may come and say help over breakfast at the café too. Kids will love the kids club (three to 12) too. On the agenda is a pirates’ adventure cruise, campfire games, movies under the stars and treasure hunts. 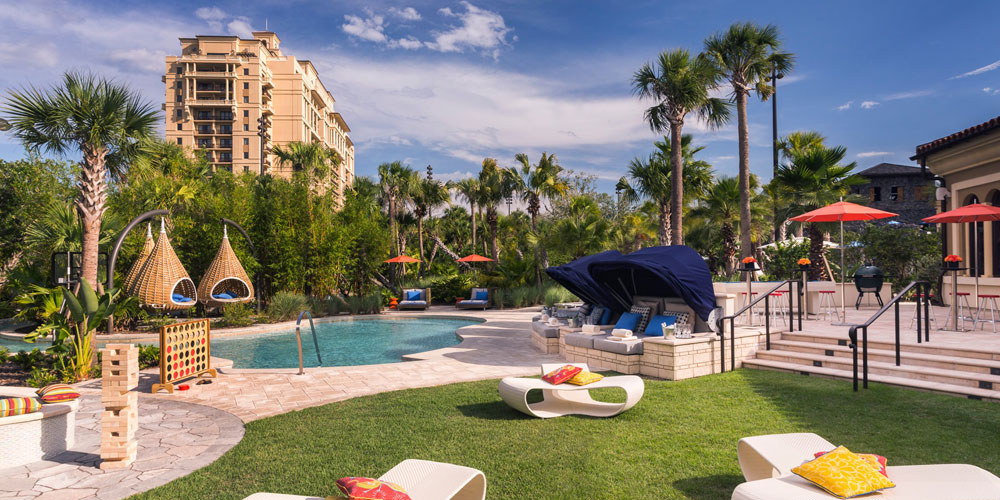 The Four Seasons Disney fits the bill for a five-star Disney experience. Four Seasons Disney is tucked away in ‘Millionaire’s Row’ within the Walt Disney World complex and guests are offered extra ‘magic hours’ and a Disney Fast Pass to the park, plus complimentary transport to Magic Kingdom, Epcot, Animal Kingdom and Hollywood Studios. Private transport can also be arranged. The resort is heavenly with calming lakes, gardens and pools to come back to after a hectic day at the parks. Rooms are top notch too; spacious and fitted with marble bathrooms and hi-tech amenities. Dining options here are excellent with six restaurants and bars. Kids will love saying hello to Donald and his friends at the ‘character breakfast’. Amenities at Four Seasons Disney include tennis, volleyball and basketball courts, golf course, gym and spa. The complimentary Kids for All Seasons club (four to 12) has a huge playground and even an interactive volcano. Explorer Island, the resorts’ water park with slides, lazy river and pools will keep all ages amused.

There is so much to do in Florida, take a look at our Florida holiday guide