Mallorca: A Balearic with something for everyone

‘Grandpa, I’ve counted 155 Lycra bottoms’, says my six-year-old daughter, who had been complaining of boredom so was given something to do. ‘Very good,’ responds my father. ‘Carry on.’ Ten minutes later, she pipes up again: ‘279.’

She is not exaggerating – there are reams of cyclists on the road. My mother, father, daughter and I have taken the famously scenic route from Andratx in the southwest to Pollença on Mallorca’s northwesterly tip, where we are staying in a villa. The Ma-10 road is Mallorca as its winsome best as it traces the gnarly ridge of the Serra de Tramuntana, the grandiose mountain range that sprawls the length of the island’s western side.

Its peaks, plunges and switchbacks are beloved of middle-aged men in Lycra of all European persuasions. Spring is when they come, so while the roads are not choked with cars as they are in summer, they are other creatures on wheels on the road. But still, it means you drive slower, taking in those wooded hillsides and valleys of ancient olive groves, those handsome stone villages and those sparkling turquoise dappled waters a little slower. 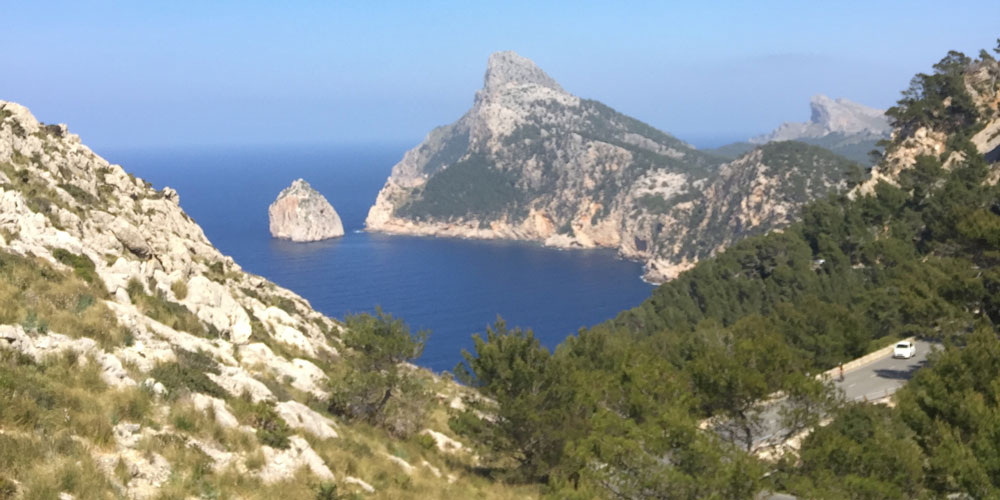 The dramatically beautiful Cap de Formentor on the northwest coast

Some may call me selfish, but I am slightly allergic to anywhere built solely for the holiday fun of children. People use the phrase ‘Happy wife, happy life’, but just as true is the less perfect rhyme of ‘Happy mum, much more fun.’ At many all-inclusive family hotels – with a clutch of incredible exceptions – either you’re packing your children off to a kids’ club where they might not want to be, thus they will protest and you will feel guilty (and surrounded by other people spending time with their children). Or, you’re wilfully surrounding yourself by gaggles more children – layer upon layer of them – at the hotel swimming pool, the only place they want to be. And then things can become, dare I say, a little reminiscent of the weekly trip to the pool (albeit an alfresco Mediterranean version). 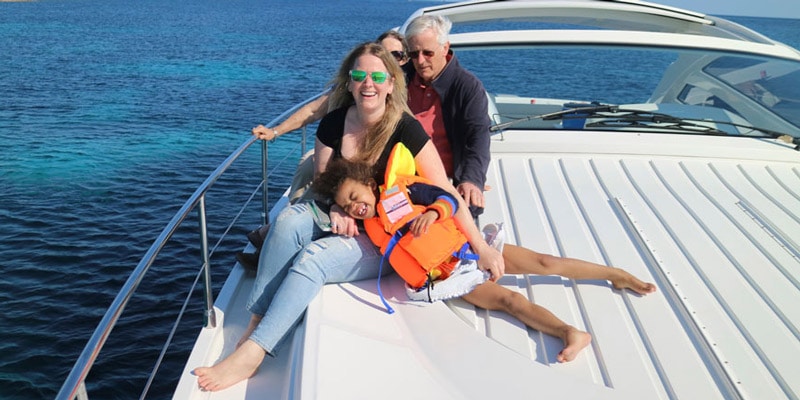 The family enjoy a boat trip

Instead, I prefer my parents’ old-school approach, which was to think of something they loved doing that wouldn’t completely alienate you, and then bring you along for the ride.  They’ve taught me that there’s no reason to avoid the things you love just because you’ve got a little one or two in tow.

Mallorca is a Mediterranean playground where you can indulge in scenic beauty and have the sort of child-friendly break that also pleases adult wants. Shoulder season is the perfect choice for this sort of break in the Balearics too, because you’re cutting out the crowds, the traffic and the under-availability. So by that that I mean Easter holidays or October half term if you have school-aged children, or May to July and after September if you’re still in that pre-school phase. We have come at Easter. Apart from Mallorca in spring being heaven, I’m also secretly pleased that none of the major waterparks have opened for the season (I know, awful aren’t I?) 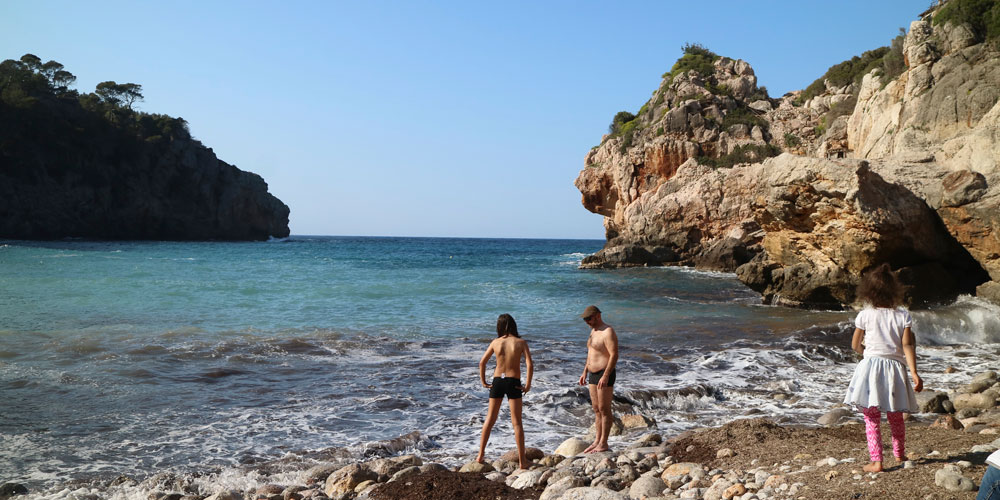 Our choice of villa location is chosen simply by virtue of it being perfect. It’s in the Mallorquin outpost of Pollença, which sits at the eastern tip of the Serra de Tramuntana, tucked between two hills. Pollença is big enough to have a life of its own beyond tourism, a decent selection of restaurants, and a genuine café culture. The villa, Las Peonias, is spaciousness personified, sleeping up to eight adults and two children in a bunk-bed room – or any constellation that one prefers.

It’s also quietness personified, tucked away in a residential enclave up the hill from Pollença called La Font. The architectural style is nostalgic – whitewashed walls, blue shutters – and the interiors are simple, classic, welcoming and homely: they open out onto lush gardens bobbing with hibiscus and roses, geraniums and vibrant bougainvillea, and a glittering, fenced pool. On the horizon, the Bay of Alicudia beckons. Las Peonias also has the aura of a home: that this is somewhere the owners retreat to for more than two weeks in a year.

The Old Town of Pollença is atmospheric, and you can walk there in about 20 minutes (past a friendly donkey whom my daughter nicknames ‘Boris’), but this neighbourhood affords more space: you could unleash a great gaggle of children into these enclosed, secluded gardens, without having to worry much about what they are up to. There’s also strong wifi and British satellite TV (pretend as much as you want that it’s great to get a break from Tiny Pop – it’s a blessed relief when you can pop them in front of it at the end of the day. Lovely). 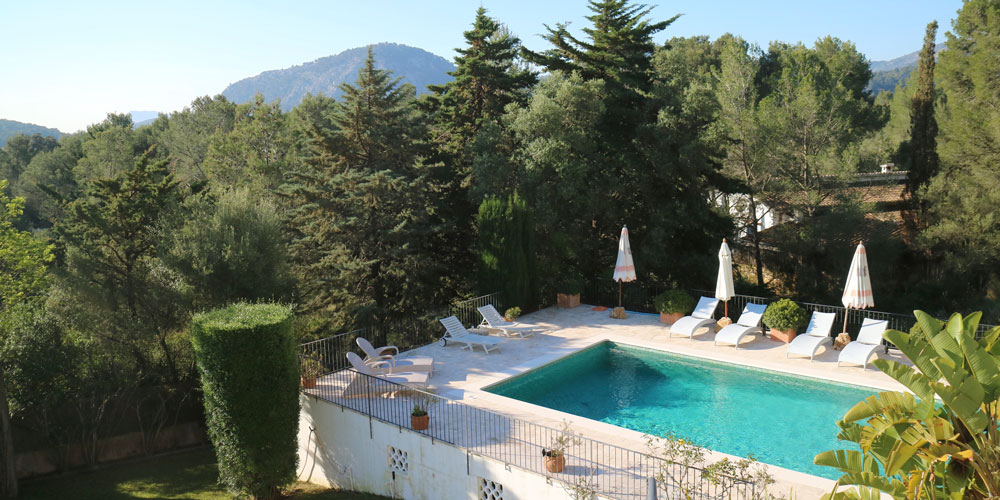 A day out in Deià is a classic multi-generational pleaser. Once a lo-fi rustic hippy hangout, it’s now a polished upscale enclave and at its soul’s core is the Belmond La Residencia – the sine qua non of characterful Mallorquin five-star beauties, carved out of constellation of gorgeous mansions ensconced in olive groves perched on staggered terraces above the village, with dreamy views over the village itself. The marvelous terrace of their Café Miró is an excellent place for lunch, because the service is impeccable but warm and unstuffy (thus perfect for children), and then there are those heavenly mountain views, and the freshest of salads, paella and seafood and meats.

Handmade breads and olive oils precede juicy plates of Sóller prawns with olive oil and a smorgasbord of tapas that my daughter devours before racing up and down the steps and around the terraces. Inside it’s a living art gallery with 33 original Joan Miró paintings. Then we take her down to the rocky beauty of the Cala de Deià is a tucked-away little cove that feels like a secret.

In fact, its little rocky perch of a restaurant, Ca’s Patro March, rocketed to televisual fame after the kidnap scene of The Night Manager was filmed here (we return later in the trip for a grilled turbot squeezed with lemon and an ice-cold Albariño). It’s rammed here in summer and parking spaces are hard to come by. Not so today. Our six-year-old is so happy collecting shells and dancing in the foamy waves that she has a bit of a tantrum when we have to leave. 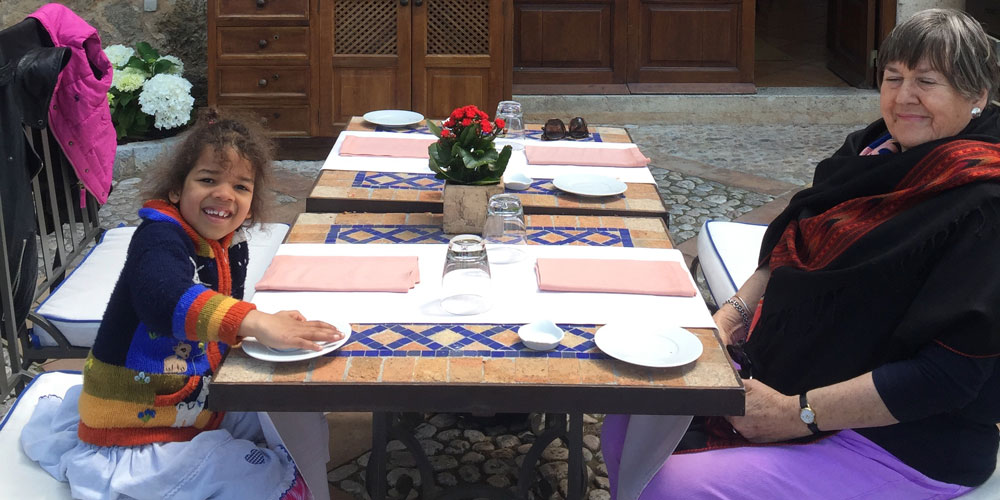 Other nights, we decamp to Pollença to eat icecream under the stars in the Placa Major while she runs around with the local kids around the stairs of the Placa. A few miles to the north of Pollença is the Puerto de Pollença, more modern but packed with restaurants and cafes on the seafront and with a remodelled harbour and marina, a fantastic beach and a great playground popular with British expatriate children.

This is a place for watersports, and there are wall-to-wall rentals of kayaks, pedalos, banana boats, even scuba diving and sailboats to hire by the day. We have an early dinner of caldereta – Mallorquin lobster stew – at Mallorquin and pan-Mediterranean restaurant La Llonja, set on a jetty in the harbour with views over Port of Pollença from the old fishing dock and just opened after a refurbishment.

Our favourite beach is the blessed Cala Formentor, which fringes the dramatically beautiful Cap de Formentor on the northwest coast, all plunging cliffs, fragrant pines, fine sands and sparkling aquamarine shallows. The problem is of course that it’s everyone’s favourite beach (confirmed by the comments on my Instagram post). 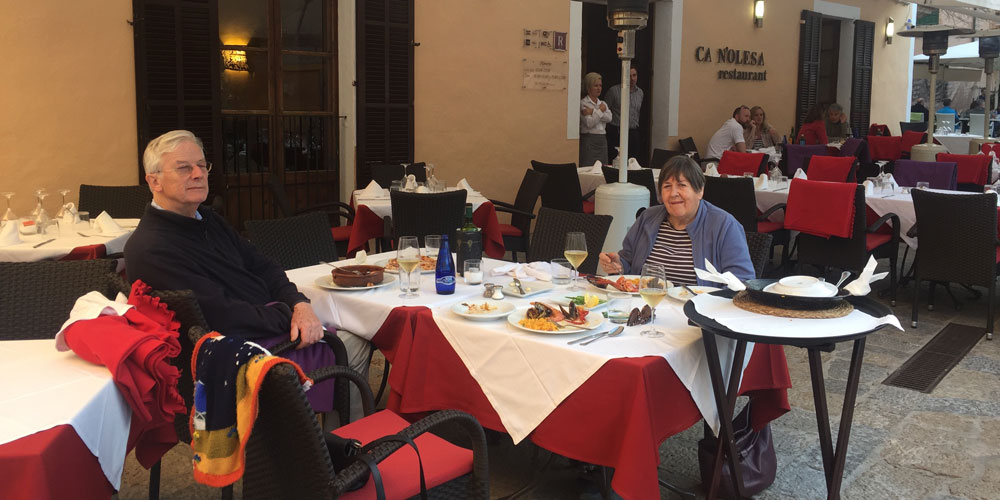 In summer, it’s bumper-to-bumper on the tiny mountain road to get here. Now, though, the children on the beach happily build sandcastles in the tranquil spring sun and devour a picnic picked up in a local deli. It includes the local spicy sausage, sobrassada, savoury pies called ‘cocarrois’, home-cured olives and biscuits stuffed with crema catalana. The restaurants that line the beach are not yet open for the season, but this is a civilised feast regardless.

We head to Palma for the day, stopping for brunch half an hour west of the city at Castell Son Claret, a 18th-century castle converted into a hotel on a gorgeous isolated private estate with 325 acres of manicured gardens, olive groves and wild pastures back-dropped by the Tramuntana mountain range, a spot so gorgeous that it was Unesco-designated in 2011 as a world-natural-heritage site. Here, Fernando Perez Arellano from Madrid has relocated his Michelin-starred Zaranda.

We’re not here for fine dining, though, but instead to take to the alfresco terrace with views from its sun-dappled terrace across the swimming pool and gardens to the valley and mountains. It’s a perfectly tranquil, restful spot for such delights as roasted octopus, burrata with an aubergine caponata, fish out of the coal oven and sprouted salads from their Olivera restaurant. After brunch we park just outside Palma’s historic centre without much to-do.

The capital is so much more than a drive-and-escape these days. It’s very much a destination in its own right and its friendly compactness is bite-sized for children. Chic restaurants and atmospheric hotels, sophisticated new-breed food markets and boutiques stuffed with covetable labels abound.

The gardens at Castell Son Claret

Instead of dragging a six-year-old to market, we head to Es Baluard, a minimalist contemporary art museum overlooking the Bay of Palma. We look at the 58-piece retrospective by Teresa Matas – ‘Why do I dress in black if I love life so much?’ which she has described as a journey into her search for self. It includes some empty clothes dangling from the ceiling, which my daughter pronounces ‘creepy’.

We then settle down for pleasant half an hour watching a video installation part of the retrospective in a quiet pod. During a long black and white video, the artist drags a massive textile quilt along a country road, eventually collapsing at the side of the road and hunkering down under it. ‘Do you think she’s tired?’ asks my six-year-old, as I rub my own eyes in the darkened room. So it’s off for coffee and giant bubbles in the Placa Mayor, where caricature portraitists are a dime a dozen. We get her portrait down for £4.50 and it’s so good, I decide to frame it when we get home.

Finally, at the end of the afternoon we hit the packed local beach, where she runs in and out of the water excitedly. It’s not too long before we drag her away, though. It’s all very being on this very peopled beach, but we are craving the quiet lushness of Las Peonias’ generous spring garden, our own private Eden.

Find out more about Mallorca

Heading to Mallorca? Here are the best resorts and hotels for the family.