Spain is one of the most popular holiday destinations for families. It’s easy to get to with warm weather, delicious food and superb beaches. In fact, there are so many places in Spain that are ideal for a family holiday that it’s hard to narrow it down. We’ve rounded up the best family destinations in Spain so you can pick your favourite. 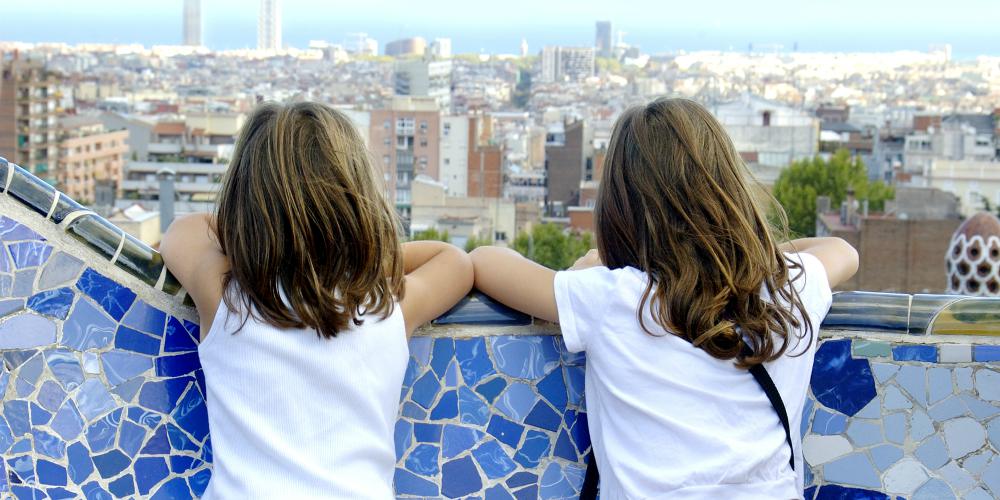 Barcelona is not just a fantastic city break for adults. It’s made for kids too. For easy exploration of the city try the Montjuic cable car. It will take you either over the sea to Barceloneta and the beach or up to the old castle. A walk to Gaudi’s Park Guell and Casa Batlló with its fantastical characters and colours should spark imaginations (plus it’s free). If you’re feeling flash with the cash go for a 360° skywalk which includes a boat ride around the coastline, a walking tour of the Gothic Quarter and a helicopter ride over the city. If you want to explore under your own steam, first head to the Gothic Quarter followed by a stroll up the infamous La Rambla to watch the street performers. Olympic Village beach is the best beach for families and even has a playground. To get closer to marine life visit the aquarium which boasts Europe’s largest underwater walkway. Finally, football fans shouldn’t miss a day trip to Camp Nou, the home of legendary club FC Barcelona. 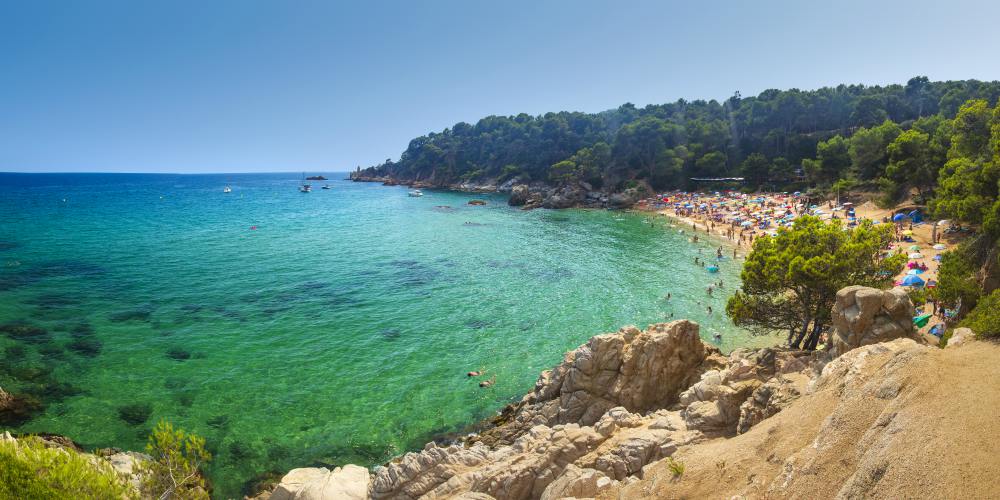 Stretching 124 miles along Spain’s northeastern coastline from the French border down to Blanes, the Costa Brava, or ‘rugged coast’ is one of the best family destinations in Spain. Most of the beaches are perfect for kids, with clean and calm water and sandy beaches. Blanes, Lloret de Mar, Sant Sant Feliu de Guíxols, Sant Antoni de Calonge, Platja d’Aro, L’Estartit and Roses are considered the best family beaches, though there are many more. There’s plenty to do in the region apart from laze in the sand. Snorkel off the Medes Islands, one mile from L’Estartit beach, for outstanding marine life, or stroll round the Jardí Botànic Marimurtra Botanical Gardens, near Blanes, for exotic plant life . The waymarked coastal trail is also well suited to families. The walking is easy and the views should keep little ones occupied. However if little legs do not want to cooperate, you could take the Roses Express train instead up into the Cap de Creus nature park. 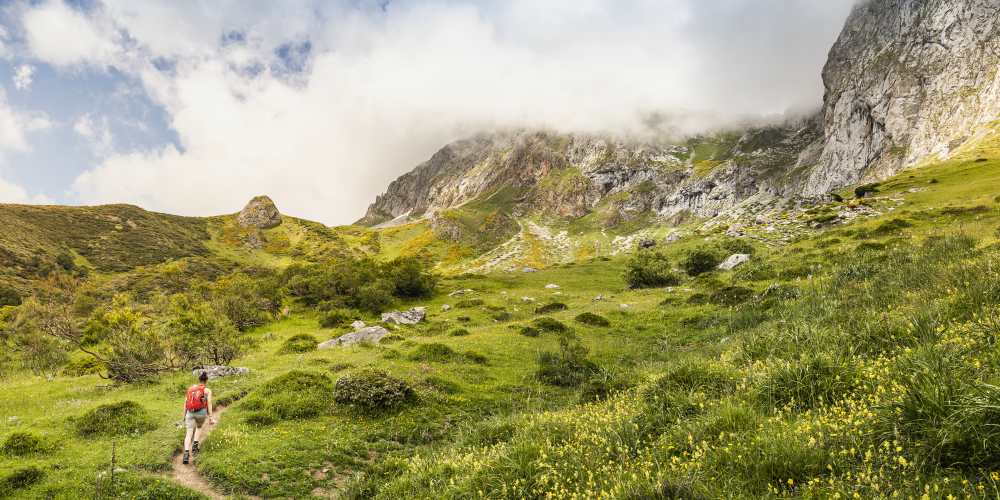 Cantabria, a region in the north of Spain, consists of Atlantic coastline and glorious mountain ranges. Like the Pyrenees, it’s a fabulous destination for outdoorsy families. The Picos de Europa National Park is a highlight in Cantabria. There are miles of magical walks in the fresh air to enjoy, many of which are suitable for youngsters. If you can peel yourself away from the high ranges, there’s Argüeso Castle, a network of caves complete with prehistoric art at Altamira, the Maritime Museum and Cabárceno Natural Wildlife Park to keep everyone amused. 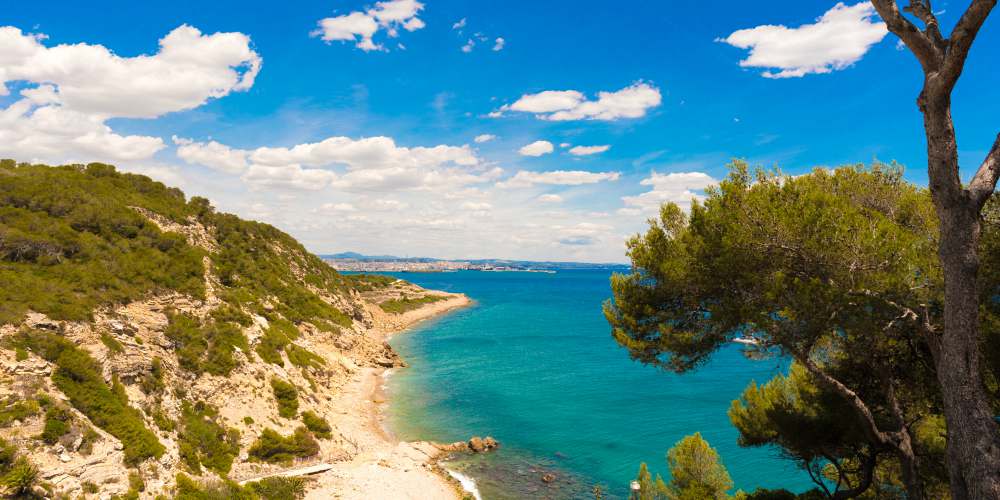 The Costa Dorada follows the coastline south after Barcelona down the eastern coast of Spain from Cunit to Alcanar. One of the main draws for families here is a visit to PortAventura, a huge amusement park close the Tarragona. It’s also a great place for active families. Cycling is excellent here. The town of Cambrils has miles of bike lanes, with many along the coast. Inland, the Montsant Massif and the Prades Mountains cater for hiking enthusiasts as does the ‘The Castle and Monastery of Cornu Bovis’ Trail’, which rises to an old Roman castle. The Costa Dorada is not called the ‘golden coast’ for nothing. Miles after miles of long golden beaches stretch out offering families watersports galore. For something completely different though you may want to head to L’Ametlla de Mar, south of Tarragona to snorkel amongst hundreds of silvery Bluefin tuna. 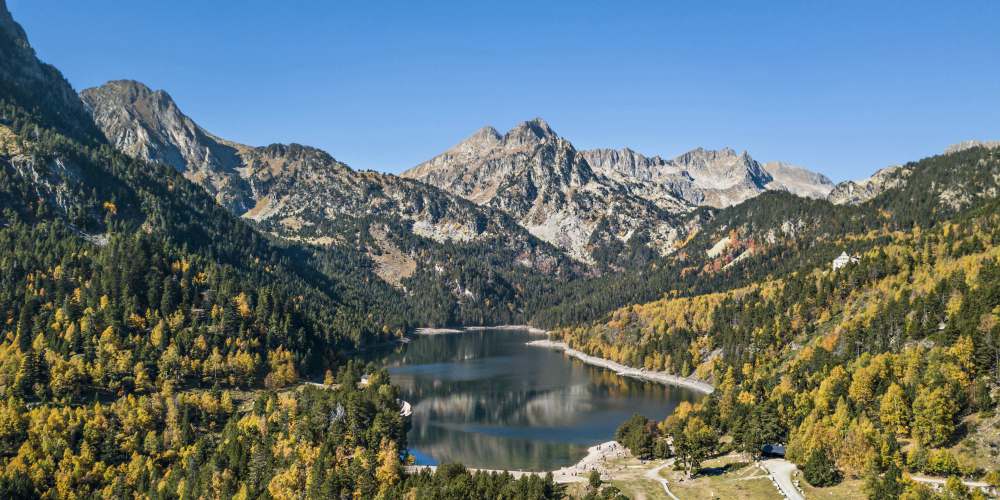 Spain’s beaches are so popular as a family holiday destination that the country’s interior is often overlooked. But head inland in the north of the country to the Spanish Pyrenees and you’ll be rewarded with a wildly overlooked part of the country with stunning mountain vistas and all the action-packed activities that come with it such as hiking and mountain biking. Visit the fertile volcanic landscape of Garrotxa or dramatic and grand Aigüestortes and stay in Sort, a charming, historic town which is set up to organise all your outdoor fun. Should you want a bit more of a city fix, Barcelona is three hours away so could be combined as a weekend add-on. 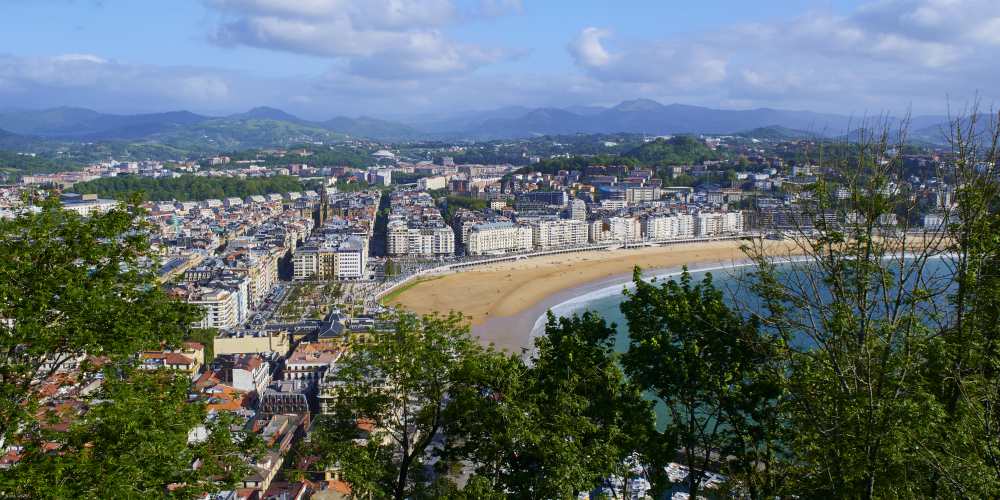 Foodie paradise San Sebastián is another fabulous city geared up for families. It’s a very green city with plenty of parks and playgrounds. Kids should love the thrilling ride up the funicular to the top of Igueldo for the views out over La Concha Bay and the Monte Igueldo theme park for classic fairground rides. There are three gorgeous beaches to relax in, Playa de la Concha, Playa de Zurriola and Playa de Ondarreta, plus an aquarium to learn more about the watery world nearby. If you want to head out of the city, try a day trip to Santa Clara island or hiking up into the hills. The city of Bilbao is only an hour away too should you want to check out the Museo Guggenheim Bilbao. 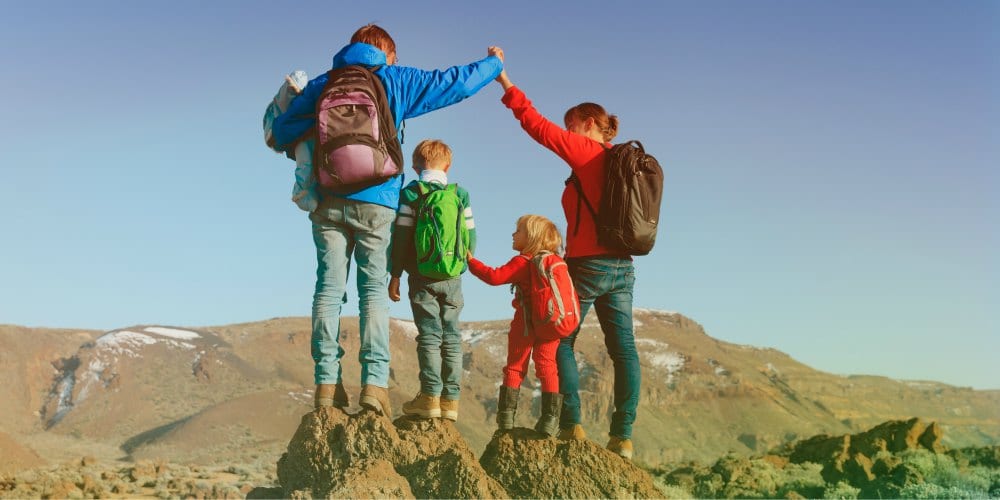 Tenerife’s subtropical climate means it’s a top destination to visit during spring and autumn as well as over the summer months. The island boasts spectacular landscapes as well as lava and sand beaches and lively seaside resorts. You will find most beaches have all sorts of watersports attractions from kayaking to banana boats, sailing trips and snorkelling, though head northwest to the lava beaches should you want a quieter feel. A holiday in Tenerife will not be complete without a trip to Mount Teide, the world’s third-largest volcano. Little legs should have no fear as there is a cable car that travels up to the snow-capped peak. Within the National Park there are also miles of wild hiking and biking trails if you have older children. 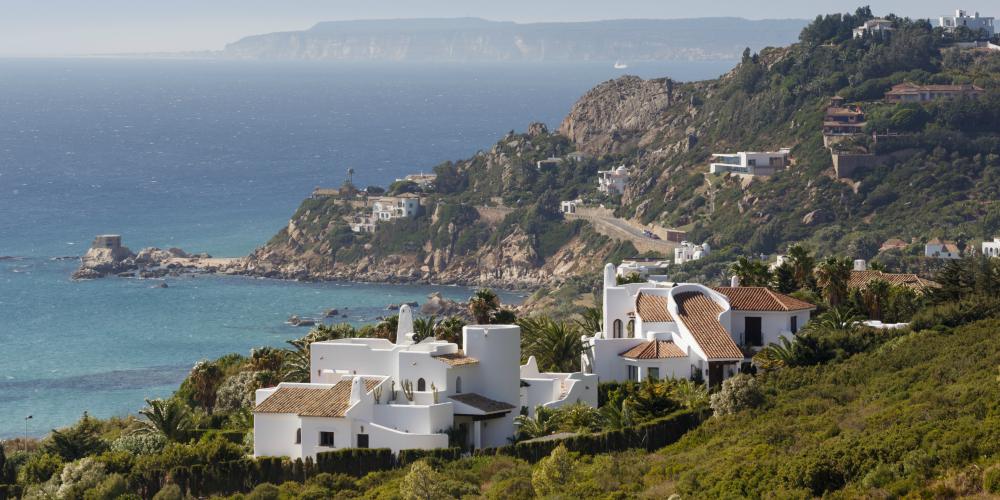 Spain’s ‘coast of light’ faces out to the Atlantic and runs along the southwest of the country from Tarifa to the mouth of the Guadiana River. As the region is far south, temperatures are much warmer, so it’s a great choice outside of the peak season. Expect upmarket towns here plus lovely dune-backed beaches. The Zahara de los Atunes is a family favourite beach. Family attractions in the region apart from the beaches include an animal rescue centre, the Zoo de Castellar in Castellar de la Frontera, the adventure park Entre Ramas Aventura and Doñana Natural Park, a massive nature reserve that hosts wetlands, migratory birds, pine forests and shifting coastal dunes. 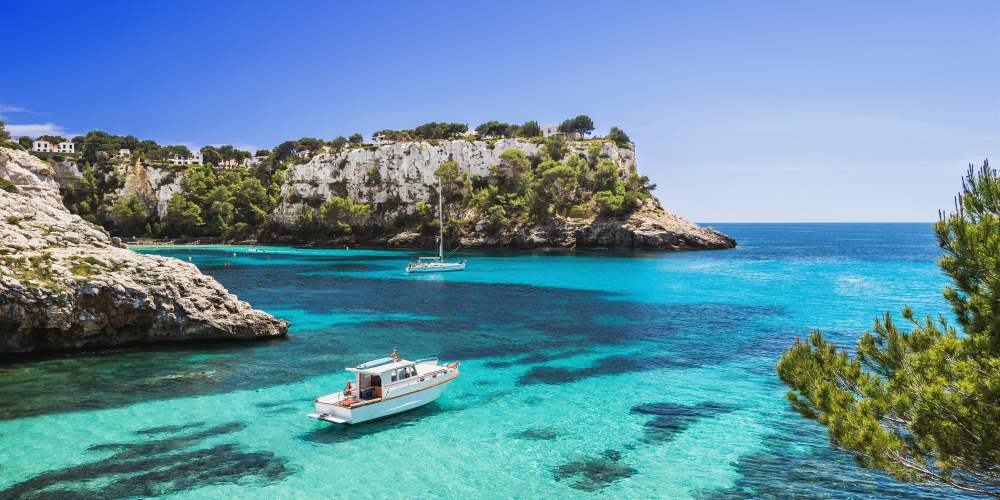 The island of Menorca may be no larger than the Isle of Wight but it contains much for families to enjoy. Clear, shallow waters and sandy beaches are found all around the island, and are often much quieter than its louder neighbours, Majorca and Ibiza. The island’s calm waters mean it’s the ideal spot for first timers to try sea kayaking. Cala Galdana is one of the island’s best beaches for families. Despite it being popular it still manages to retain a feeling of tranquillity. Es Grau beach and nature reserve is another top spot for children, with a long stretch of shallow water to paddle in. Other good spots include Santo Tomás beach and the beaches of Son Saura. The Cami de Cavalls coastal path is great for families who want to admire the water from dry land. It’s well marked and easy to follow. Another gem for families is the S’Albufera des Grau nature reserve backs onto the beach, a wetland area around a lake and the reason Menorca is a UNESCO Biosphere Reserve.