Cycling holidays on La Vélomaritime can take you for 1,500km along the northern coast of France. But as travel writer Rudolf Abraham recently discovered, the trick to doing the Vélomaritime with kids is to pick your routes, hire ebikes and hop on trains. 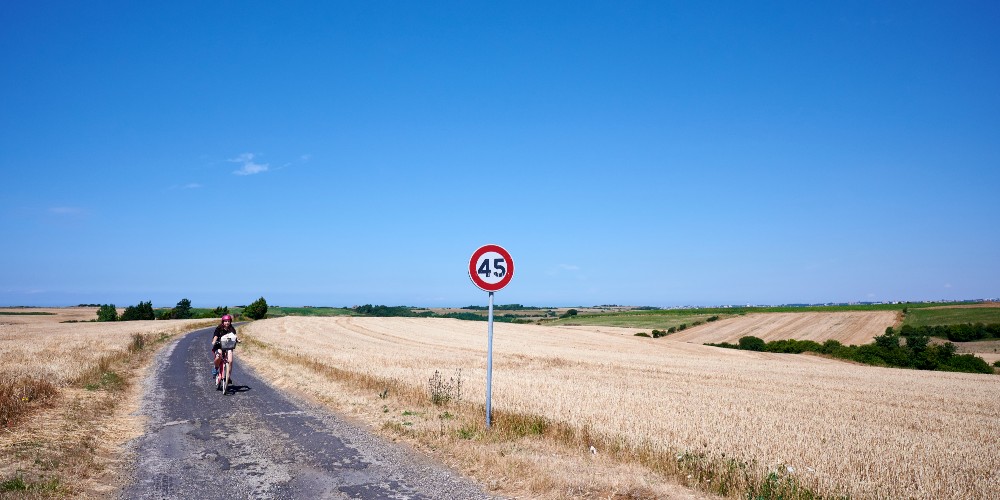 The huge sweep of coastline that is the Baie du Mont-Saint-Michel gradually opens up on our left, as we leave the asphalt lanes and shellfish shacks around Cancale behind us, and begin following a narrow track beside the sea. Low, windswept dunes glide past, merging into a vast sprawl of salt-caked flats flecked with sea grass. The whiff of seaweed fills the air, gulls shriek and caw in a cloud-streaked blue sky. Somewhere up ahead we can see the dark smudge of Mont-Saint-Michel, rising out of the silvery grey-green sea like a mirage. 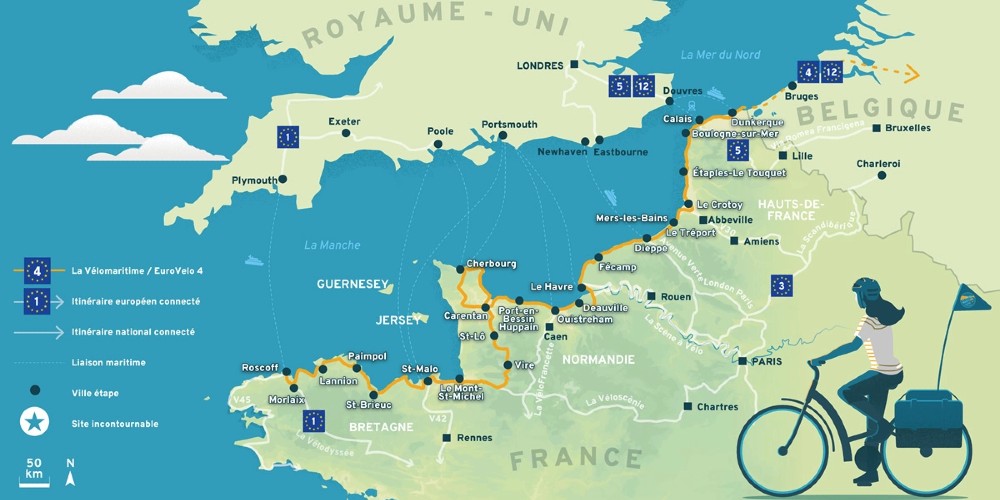 We were cycling the Vélomaritime. This long-distance route stretches some 1,500km along the northern coast of France. It runs from Roscoff, near the far-flung northwest tip of Brittany, all the way to the sprawling sand dunes east of Dunkerque, on the border of Belgium.

Along this beautiful stretch of coastline it takes in glorious swathes of sandy beaches and iconic sea cliffs immortalised by the likes of Monet. There are World Heritage sites and picturesque old fishing ports. Gorgeous rolling countryside is a constant companion and there are more Beaux Villages than you can shake a stick at. 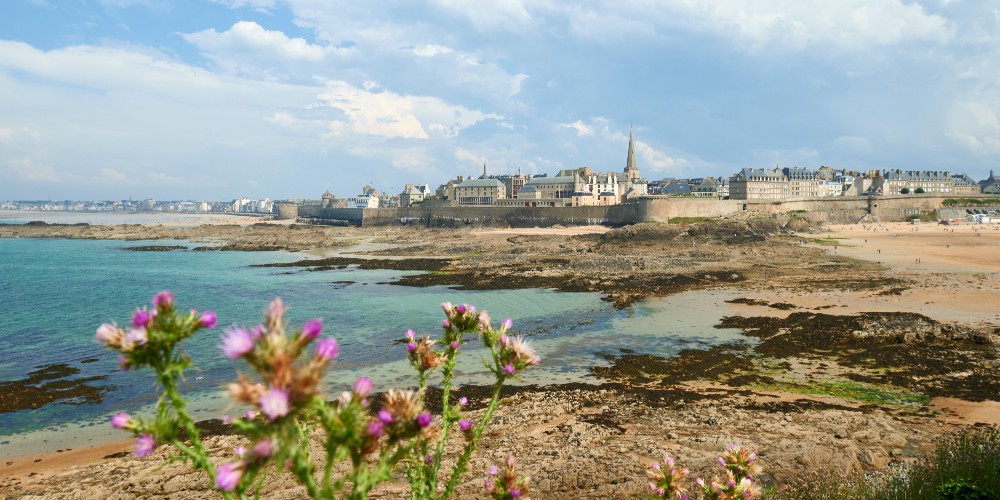 Fun, food and more beaux villages than you can shake a stick at

In fact, the entire route crosses the length of Brittany, Normandy and Hauts-de-France. Here you’ll find enough history, architecture and culture to keep you busy for months, from Norman abbeys to medieval belfries to WW2 sites. And a whole slew of places seem specifically designed for kids to go wild over, including the amazing Nausicaá and La Cité de la Mer.

That’s before even mentioning the endless succession of opportunities to jump off your bike and throw yourself into the sea. Of course you’ll also be cycling through the impeccable, combined culinary traditions of 10 departments as well.  So leave room for cider, seafood and Calvados, carbonade, potjevleesch, and all sorts of mouth-watering cheeses in between, from Pont-l’Évêque to Maroilles. 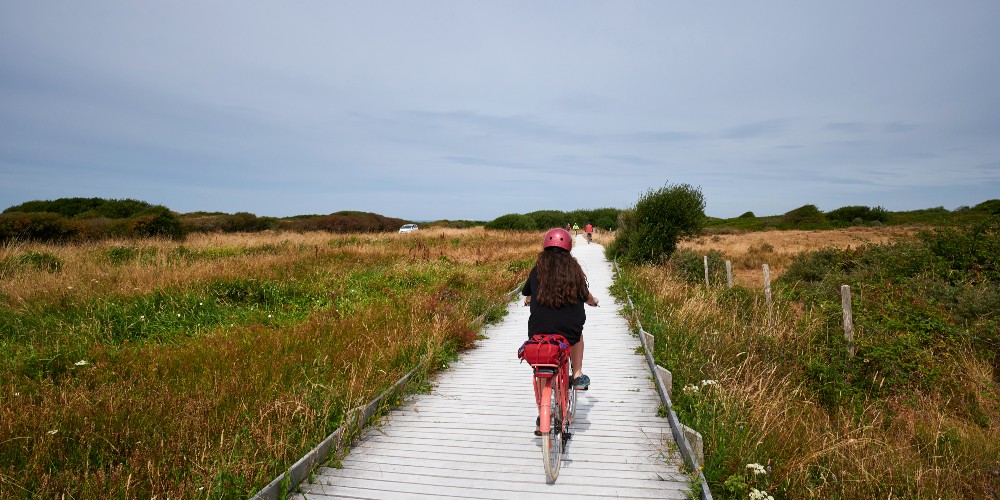 All of which goes towards making the Vélomaritime an amazing route for families. The cycling isn’t difficult. Days can be as short or as long as you want. Plus, there are no mountain ranges to struggle over. The route largely follows a mixture of low-traffic country lanes, greenways and tracks. You’ll also come across a few sections on busier roads, although most navigation around towns is via a well-developed network of cycle lanes. 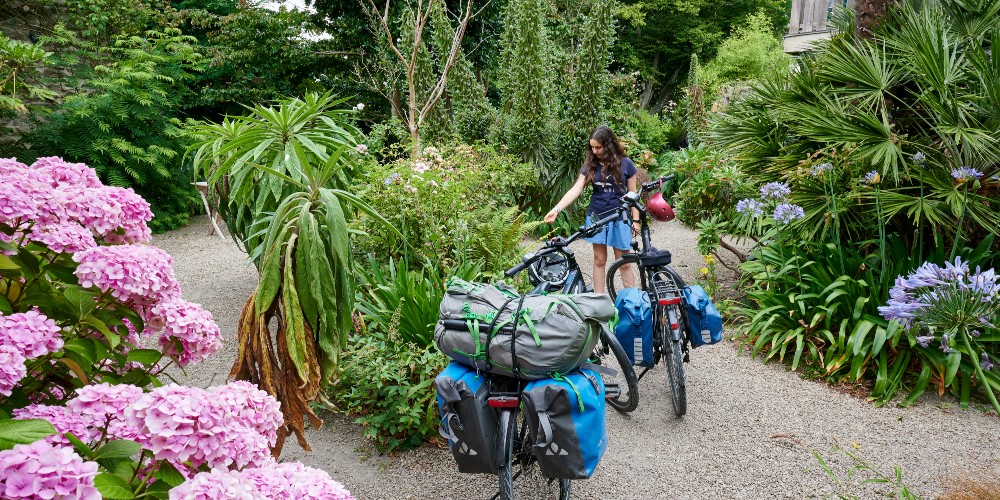 I love the idea of cycling the whole Vélomaritime. However, I wanted to make it more manageable for my 12 year old daughter, and fit in with the school holidays. So I decided to pick off three or four sections spread across Brittany, Normandy and Pas-de-Calais. Then the plan was to travel between each section by train and hire ebikes locally. The result was a superb one-to-two-week sustainable cycling holiday at a fun pace that’s easily doable with kids. 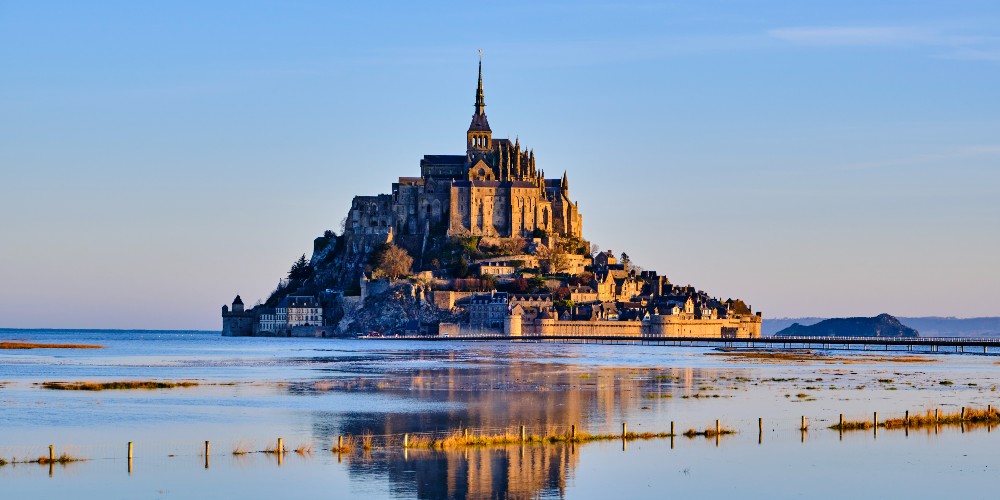 From the fabulously impressive Saint-Malo with its massive sea walls surrounded by fortified islands, and the unforgettable Baie du Mont-Saint-Michel, we picked up the route again in Normandy, following the Cotentin peninsula and the D-Day landing beaches towards Ouistreham. 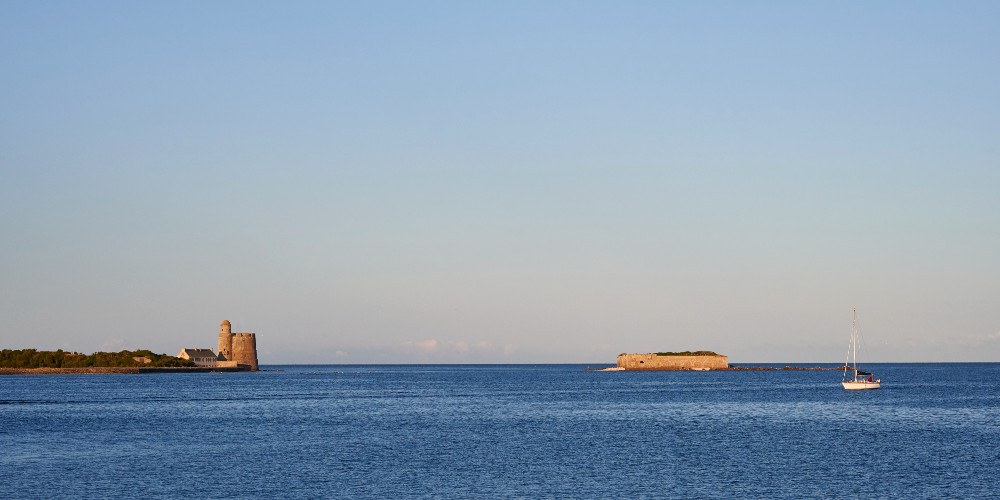 Then we cycled the stages between Carentan and Cherbourg in reverse. Passing the high dunes above Utah Beach we headed into Saint-Vaast-la-Hougue. A lovely little town set around a typical old fishing port, here we watched the sun setting from its long pier. The following day we made a detour to Barfleur. Yet another beautiful little port, it was the perfect place to stopping for coffee (me) and pastries (my daughter) at a café overlooking the waterfront.

From Barfleur to Cherbourg the route took us across rolling hills and along the valley of the River Saire. Here we stopped for an idyllic picnic beside streams and old mill channels just outside Les Moulins. 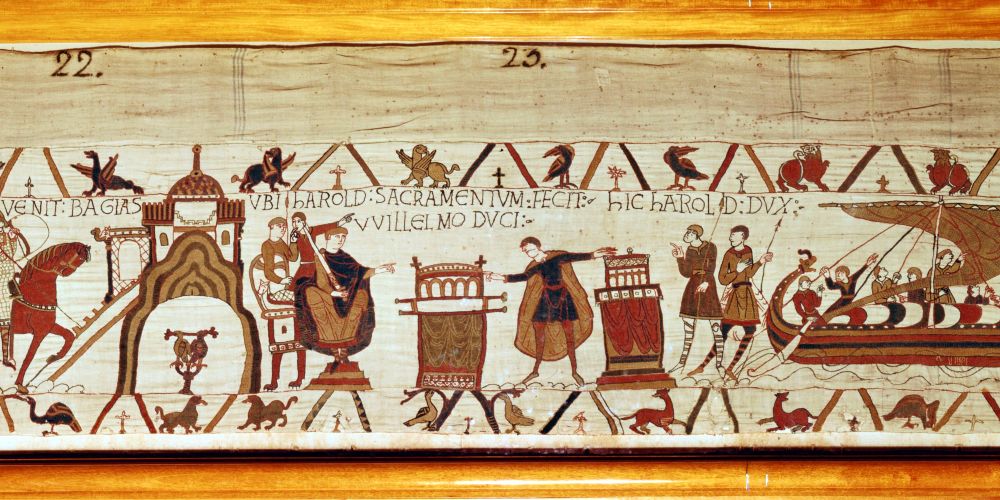 The Vélomaritime adds the Bayeux Tapestry to cycling holidays

You really can’t cycle along the Normandy coast without heading inland to Caen and Bayeux. The Abbaye des Hommes, including the burial place of William the Conqueror, and the Memorial Museum in Caen are fascinating.

The Bayeux Tapestry is also worthy of a detour from just about anywhere. It’s beautifully displayed, with an excellent audio guide which makes the whole thing enormously entertaining, and incredibly vivid for kids who have already learned about the world of 1066 at school. 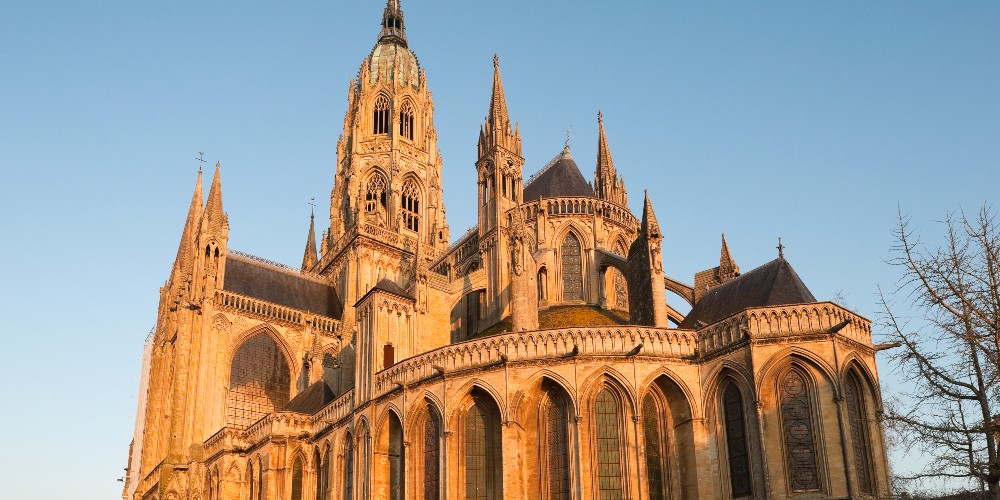 After hiring bikes from LocVélo in Bayeux, we headed out to the coast, following quiet country lanes past hamlets clustered around Norman churches and great, green fields of wheat, flecked with red poppies. 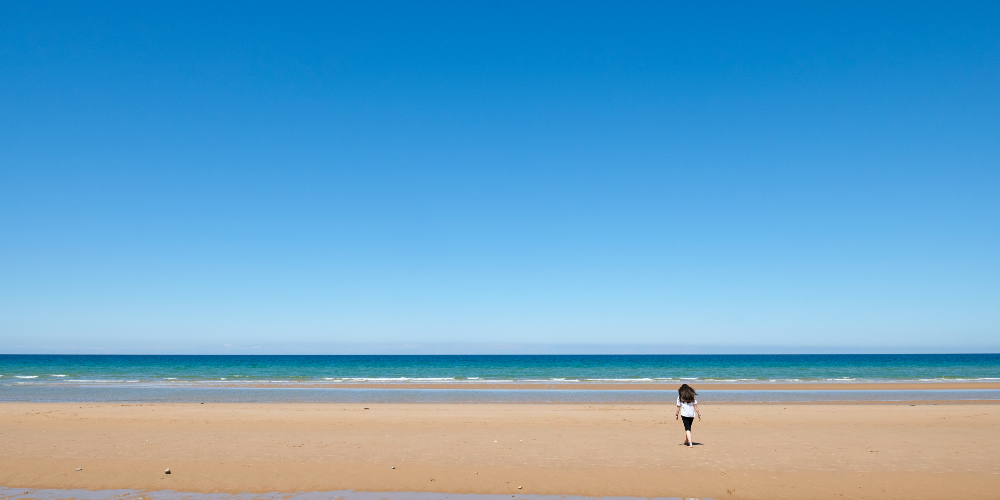 As always, traffic was busier as we approached Omaha Beach – and non-French number plates noticeably less mindful of cyclists. But the setting was as hugely impressive and humbling as ever; its tussock dunes giving way to a broad sweep of rippling sand and shallow meandering channels, where my daughter skimmed stones, and crabs poked their stalk-eyed shells out into the sun.

Bidding farewell to Normandy, we took the train to Étaples-sur-Mer in Pas-de-Calais, where we hired ebikes from Les Balades du Raymond, and looped back to Le Touquet, to spend some time on its iconic swathe of golden sand. 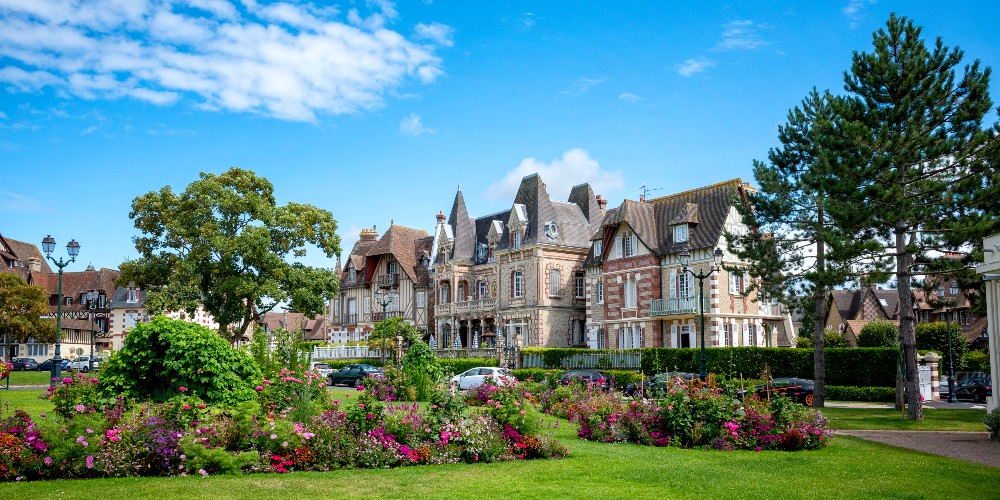 We followed the beautiful Côte d’Opale for two days, stopping to walk along a path above the breathtaking cliffs near Wimereux, and again, to take in the wilderness of dunes just outside Ambleteuse.

In Boulogne-sur-Mer we spent as much time as we could at Nausicaá. The largest aquarium in Europe, Nausicaá’s incredible marine life is viewed through a 20m by 5m wall of glass. And with sharks gliding past her nose and the giant wings of a manta ray soaring overhead, my daughter described the experience as like being in a dream. 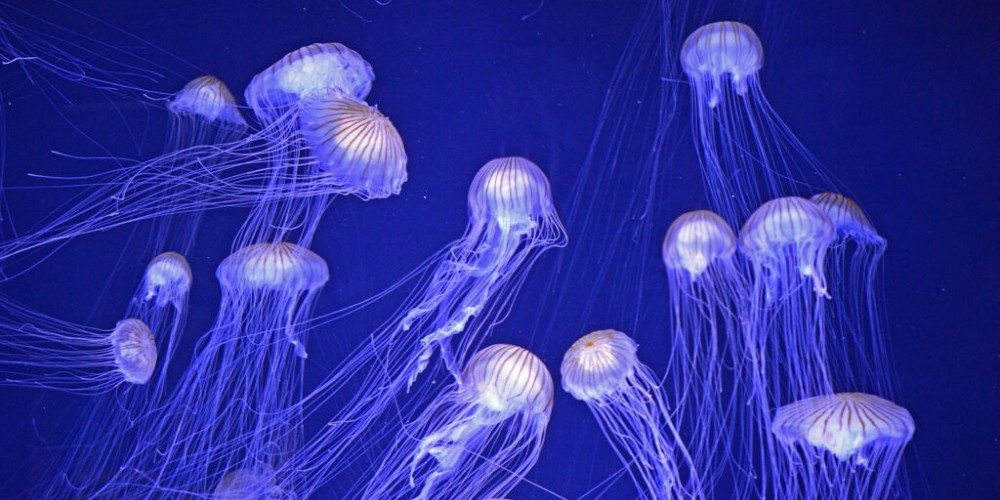 At Condette, we visited Château d’Hardelot with its poignant shared mix of Anglo-French heritage and striking Elizabethan theatre. And then in Calais, we paused to watch the resident Dragon spit water and blow smoke at unsuspecting passers-by. 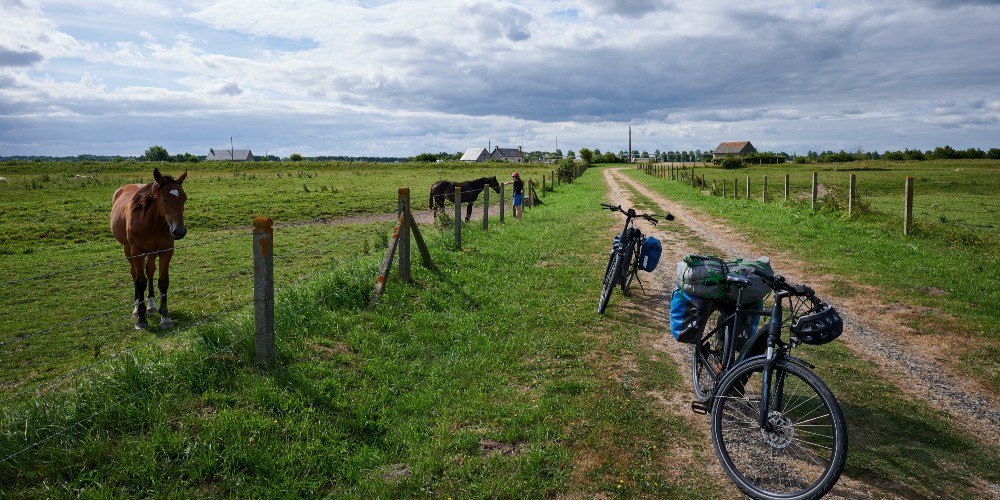 We left our bikes in Calais and took the train on to Dunkerque, with its wonderful LAAC Museum, medieval belfry and Princess Elizabeth (one of the ’little ships’ of the 1940 evacuation). Here we fittingly, ended our Vélomaritime journey on the beach: huge, windswept and stretching off towards the Belgian border, etched by long shadows in the late evening light. And, amid the seaside cafés, the weight of history and the endless rush of the sea, my daughter sprinted off into the waves, and did celebratory cartwheels across the sand.

There’s really nowhere to match France when it comes to family cycling trips – and the Vélomaritime is one of the very best. 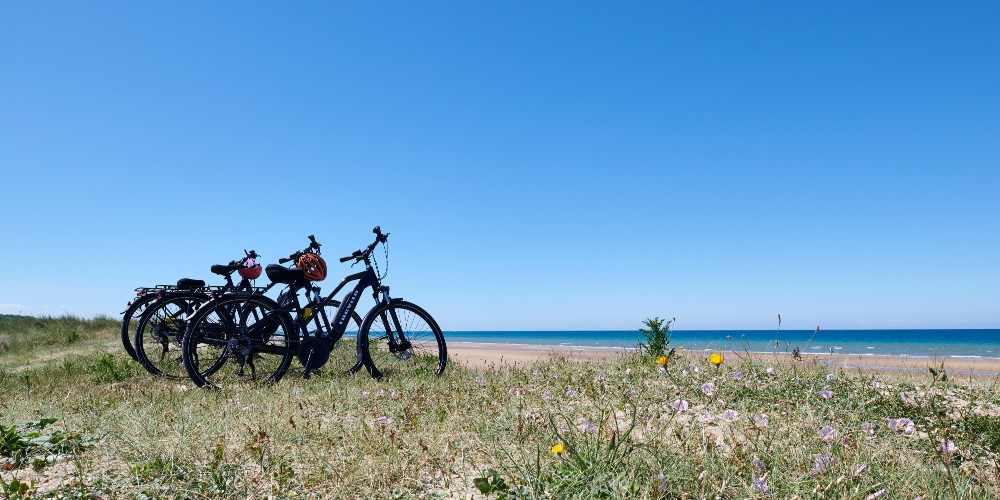 The Véloscenic: family cycling holidays from Paris to Mont-Saint-Michel

Running 450km from Paris to Mont-Saint-Michel, this is a fantastic cycle route with extended sections along greenways and beautiful scenery. It also takes in several World Heritage sites, and my daughter and I cycled the Normandy to Mont-Saint-Michel section when she was nine. 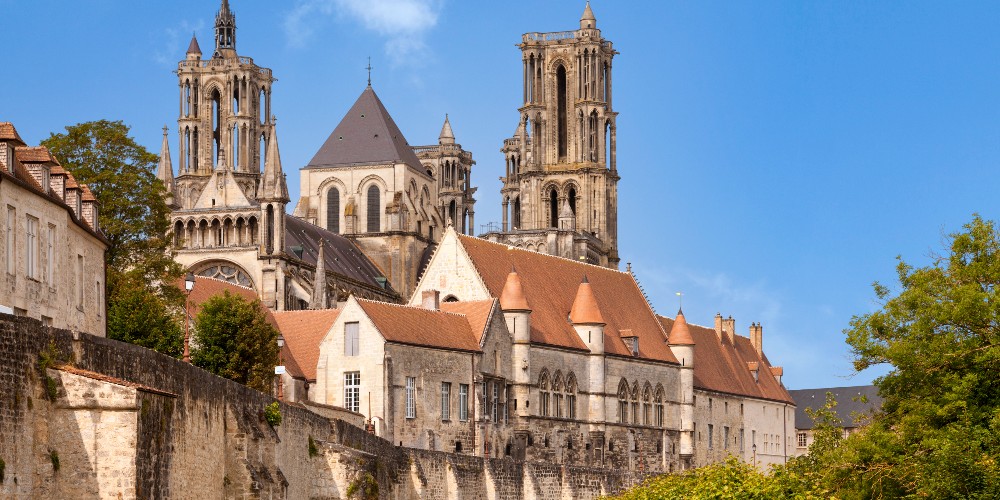 The section of this ultra-long-distance route where it passes through the Thiérache region in Aisne is lovely. It follows a former railway line in places and passes the amazing Utopian-inspired La Familistère in Guise. As a bonus there’s the chance to hire canoes for the day and paddle off down the Oise. 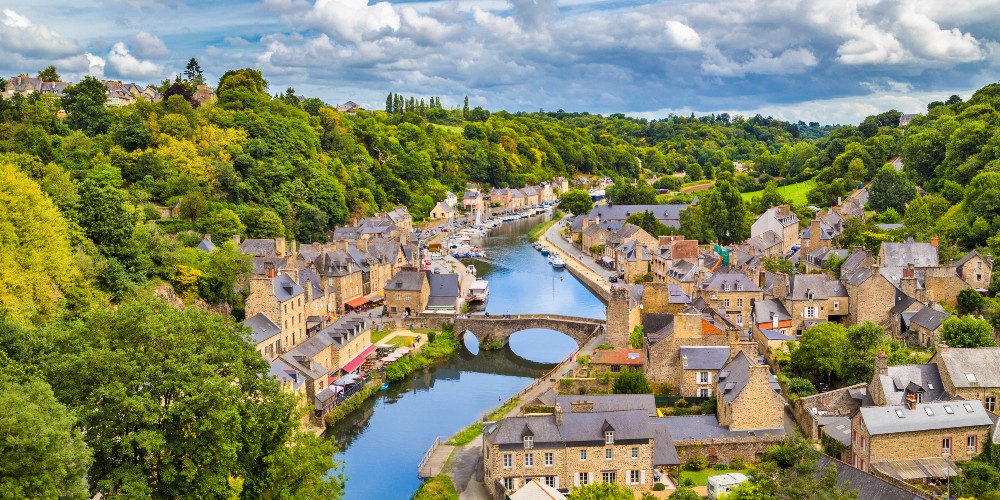 Dinan on the River Rance, Brittany

The canals of Brittany, Rennes to Dinan: a personal family favourite

Brittany has hundreds of kilometres of canals, which offer a variety of wonderful greenway routes: perfect for cycling with kids, devoid of traffic, and almost entirely flat. Plus there are oodles of opportunities for sleeping on boats – when I first told my daughter that bit she was so excited she nearly knocked me into the canal. Rennes to Dinan is a good route to start with, along the Canal d’Ille-et-Rance. This was the first French cycle trip I did with my daughter, when she was seven.

Brittany Ferries sails from Plymouth, Portsmouth or Poole to Roscoff, Saint-Malo, Cherbourg, Caen and Le Havre – all on the Vélomaritime route.

Book ahead for trains in France through SNCF  or Trainline

Bike-friendly places to stay on the Vélomaritime are easy to find. We particularly liked Hotel les Charmettes in Saint-Malo and Hotel Fuchsias in Saint-Vaast.

Hire bikes with rear panniers so you have enough room to carry luggage with a small rucksack strapped on top.

I always take my daughter’s cycling helmet from home, since I know it’s a good fit.

It’s also a good idea to carry a compact pump, puncture repair kit, a small set of hex keys and a pair of bungee chords to strap luggage across panniers.

A gel seat cover is a cheap addition to your luggage which will make some bike seats infinitely more comfortable.

If you’re taking bikes on the train book a place for these in advance, they do sell out.

Find out about La Vélomaritime for family cycling holidays 2023