The House in the Wild is ideal for a big family group safari in the Maasai Mara, Kenya, says Lisa Johnson

We didn’t see the leopard at first. We were too excited: to have finally landed in the Maasai Mara after our long overnight journey; to be sitting in an open Land Rover with a scarlet-clad Maasai guide and an emerald chameleon who had mistaken the car for a tree; to be bumping over the dusty red earth in the hot morning sun; to be about to spend new year in Kenya with some of our favourite people – a grand total of eight adults and six kids.

She was sitting by the track in front of us, silently watching a family of warthog root around in the grass. Then suddenly she pounced, landing among the warthog with almost supernatural grace, sending them scattering like fireworks, the tufts on their tails waving frantically like the flags on dodgem cars.

I looked at my daughter, Claudia (six) and niece, Hayden (11); their eyes were shining. “It couldn’t have started better,” said our guide Wilson with a grin, driving us on to the House in the Wild. It certainly couldn’t – on several trips to Kenya this was the first leopard I’d seen in the open. But over the next five days, we also saw a cheetah devouring an impala, a pair of lionesses dozing in a thicket, and another leopard, this time with two cubs romping along behind her. Not to mention an old bull elephant feasting on sweet swamp grass, a nursery of giraffe, necks twined around each other like the ribbons of a maypole, and all the other browsers and grazers of Africa’s great plains, munching away happily side by side as in the pages of a child’s Bible. 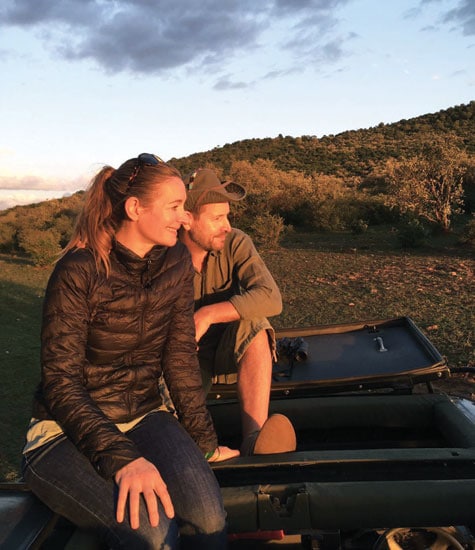 Lisa and Julian on the Land Rover 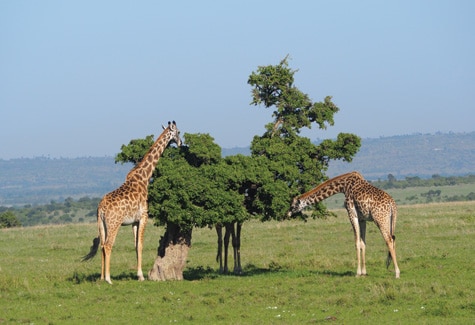 Giraffe on the plains

This – the abundance and variety of wildlife, often seen at close quarters – is the main reason the Maasai Mara works so well for a family safari. With viewings of most of, if not all the big five – leopard, lion, rhino, buffalo and elephant – more or less guaranteed, children won’t leave disappointed. True, you need to go to the National Reserve in late summer to witness a river crossing during the Great Migration, when crocs lurk as wildebeest and zebra pile across the water in their thousands, but you don’t need to base yourselves there. If you like to have the wildlife to yourself, it’s often preferable to go to one of the 14 private conservancies that border the reserve.

The House in the Wild neighbours one of these, Enonkishu, a 6,000-acre area on the north-western edge of the Greater Mara Ecosystem, and also has access to the larger conservancies of Lemek and Ol Chorro to the south. And while the lodge itself is just outside, overlooking the muddy and meandering Mara River on the 1,000-acre estate of Naretoi, this, too, is teeming with wildlife, from hippos and crocs in the river to tiny dik-dik and bigger game, as well as a multitude of bizarre and beautiful birds, although a fence keeps buffalo and elephant out.

Incredibly, this enchanting wildlife picture is a relatively new one. Until 2013, Naretoi was a farm, producing French beans for sale at Tesco, while Enonkishu was farmed or overgrazed, its Maasai owners thinking of renting or selling to maize farmers, as others had before them. But when Tarquin and Lippa Wood bought Naretoi they were dismayed by the rate at which Maasai rangeland on the edge of the Mara was disappearing to farming, with incidences of human-wildlife conflict increasing as a result. As Lippa puts it: “The Mara is such a jewel in Kenya’s crown, and to see the Maasai not valuing the lions and elephants was so frustrating.” 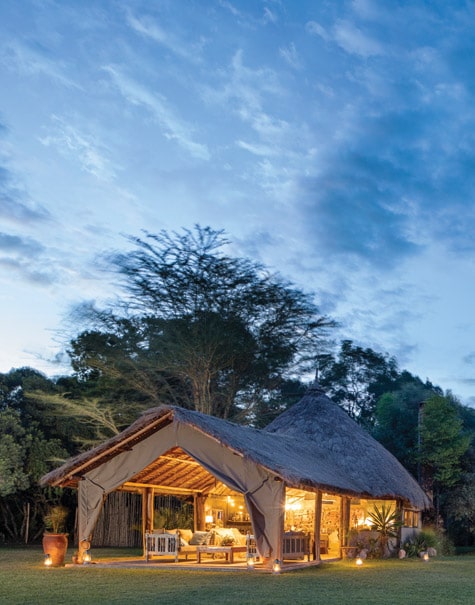 One of The House in the Wild’s thatched cottages

So they embarked on an ambitious rewilding experiment, pulling out the beans and irrigation on Naretoi, and persuading their Maasai neighbours to try grazing their cattle differently – by creating one big, healthy herd and moving it around Enonkishu one section at a time, allowing the natural vegetation to bounce back and the native wildlife to flourish alongside the livestock. “The grass cover on both Naretoi and Enonkishu went up from 20 per cent to 70 per cent in a couple of years, bringing in a whole load of different species, from butterflies to birds, even a pride of lions, which shows how resilient nature can be,” says Lippa 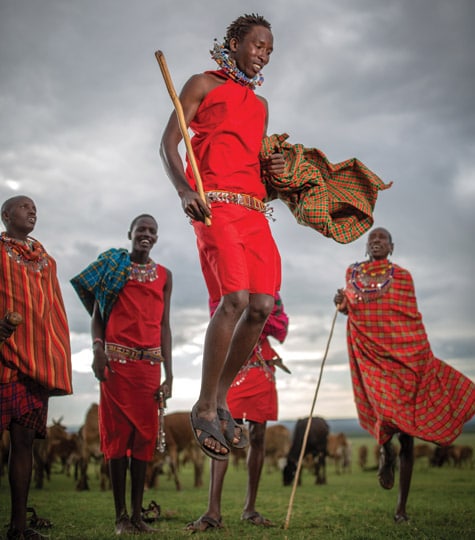 Maasai jumping on a visit to the village

The House in the Wild is one of several businesses the Woods have set up to support the project, and with three children of their own – Tamara (eight), Pepali (six) and Wilbur (three) – they know what works for families. The 14 beds are distributed over four cottages, while the newly renovated verandah lounge-dining area is a relaxed space where everyone can come together and play games on the sofas, or drink cocktails at the antique Swahili bar. The thatched and tented cottages are stylish but unfussy, with double beds big enough to accommodate little ones unsettled by the nightly whoop of hyenas, and the food – including epic breakfasts of home-made granola, omelettes, pancakes and fruit, served by the ever-smiling Godfrey – is unfailingly delicious. From our morning wake-up call to night, when a watchman showed us to our rooms, we had an absolute ball – splashing in the pool, watching vervet monkeys grab our pancakes, playing rounders on the lawn, sharing stories around the fire; and Hayden and Claudia loved popping their heads round the kitchen door to ask Purity, our chef, for cornflakes.

Beyond the lodge, the Woods have been busy shaping the wider experience for families with an interest in the bigger picture: George (15) and Archie (13) had a go at fishing for catfish, Felicity (18) slept out around a campfire on Kileleoni Hill and visited the rhino sanctuary, and Catherine (11) joined us at the local Maasai village, where 32 mud huts stand in a ring between two circular thorn bush fences, the inner enclosure for the livestock. After trying to jump as high as the Maasai men, and watching them bring in their cattle for the night, we continued to the Maasai school and church, built with donations from previous guests. A talk at the Mara Training Centre, set up by the Woods to introduce others to Enonkishu’s model of sustainable rangeland management, offered a sobering insight into the challenges faced by wildlife conservation here, with global warming and population growth both contributing to increased pressure on the land. 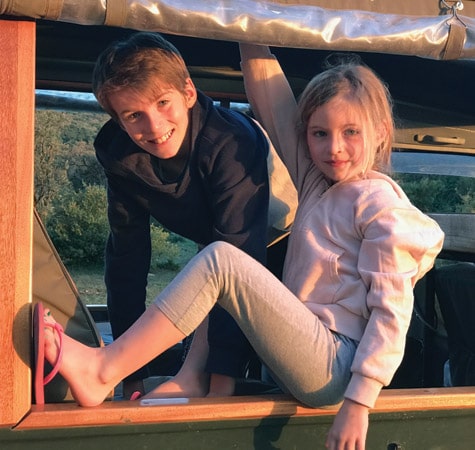 Archie and Claudia soak up the sunset

Much of this went over the younger kids’ heads, but they seemed to have an instinctive feel for the magic and interconnectedness of Africa’s wild things and open spaces: a tiny gazelle crouching by a grassy mound at sunrise; a pair of hyena, skulking under purple grey sky streaked with orange. It was a joy to see them all sitting happily in the Land Rover, chatting and laughing with our Maasai guides Wilson, David and Jack, learning about wildlife habits, habitats and footprints – and beginning to understand about their own.