Right now planning family holidays might seem like something we did a lifetime ago, but nobody can stop us family travellers dreaming. And if you’re going to dream, dream big. Here are our big 12 bucket list adventures to have with kids when the world’s open for exploring again. 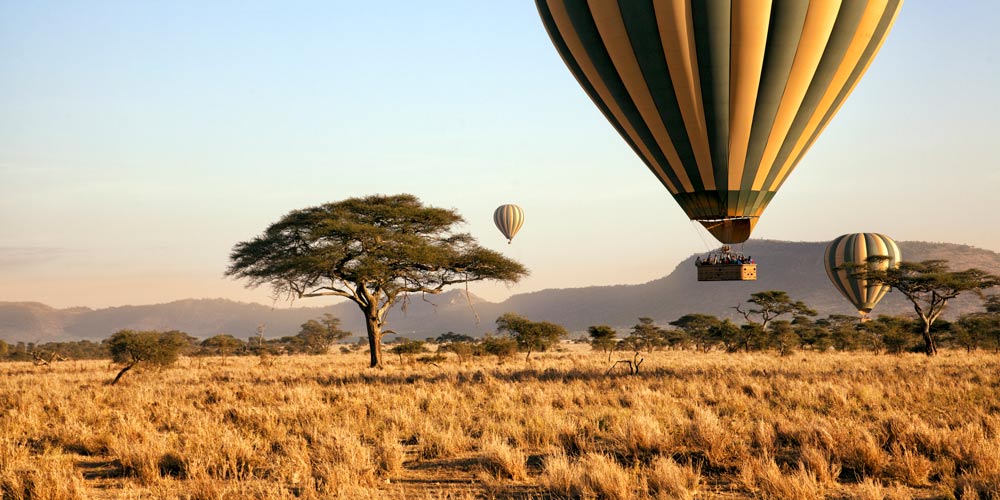 Serengeti National Park is one of the original UNESCO World Heritage sites and its annual Great Migration is a Natural Wonder of the World; earning it first place on our family travel bucket list.

Every year between May and October, millions of zebra and wildebeest migrate across the Mara River between Tanzania’s Serengeti and the Masai Mara in Kenya. It’s an awe-inspiring spectacle and easily the most iconic of all African safari experiences, but possibly one to save for older kids and teens: the Serengeti alone has over 3000 lions, and Grumeti River crocodiles are monstrous, so savage drama is almost inevitable.

When to go
The Great Migration depends on Tanzania’s rainy season, but is normally at its peak between July and October.

How to get there
Flights from the UK to Kilimanjaro Airport take from just under 11 hours. Serengeti National Park is an hour’s flight from Kilimanjaro. The ATTA (African Travel & Tourism Association) directory lists Great Migration safari specialists in the UK. 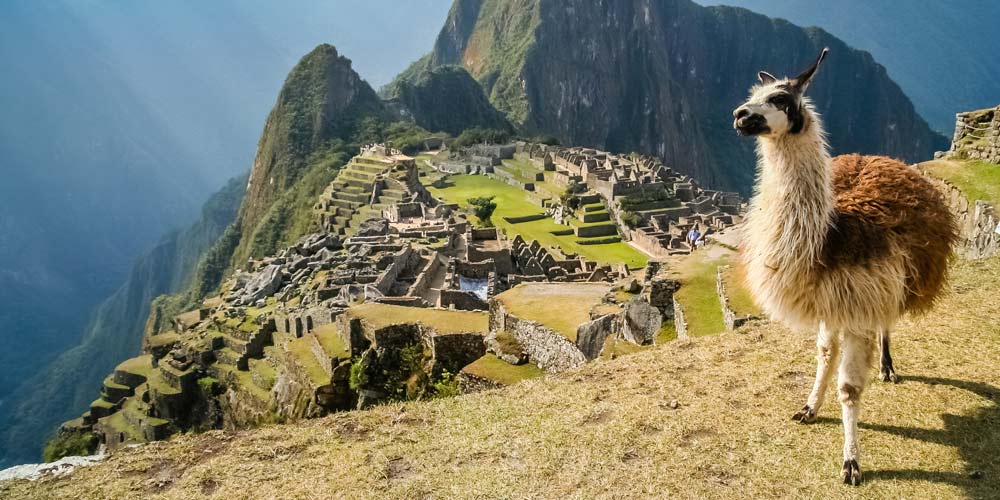 Best in our family travel bucket list bonding category, has to be the majestic, and fairly demanding, Inca Trail from Cusco to the ruins of Machu Picchu – so high in the Andes, pre-hike altitude acclimatisation is non-negotiable.

Only guided treks on the trail are allowed, so you have local experts to lead the way, porters carrying your stuff, and home-cooking at each night’s camp. The first sight of Machu Picchu, cradled by soaring mountains, is worth every second of the three day climb, and sharing the experience as a family is unforgettable.

When to go
The best time to trek the three-day Inca Trail is between July and October.

How to get there
Flights from the UK to Cusco take from 18 hours and 20 minutes. 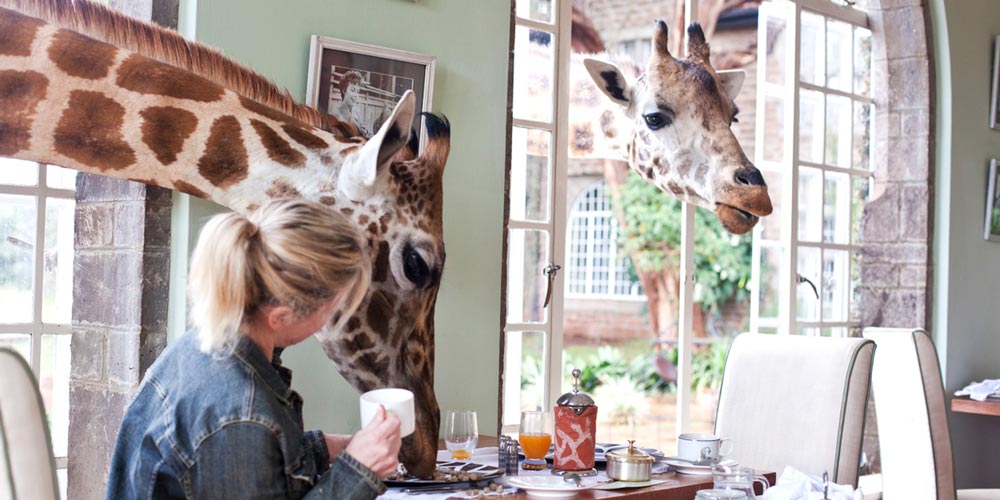 Staying at a country manor won’t sound too thrilling for kids, until you mention the country is Kenya, and the manor has a resident herd of Rothschild Giraffes. This experience is so must-do, it’s described as ‘the most unforgettable bucket-list breakfast in the world’.

Giraffe Manor sits in 140 acres of forest on the outskirts of Nairobi. It looks every inch the grand stately home, until a giraffe pops its head through the window in search of snacks, or you step out on to the terrace and several stately creatures are gliding gracefully over the lawn. Young guests can invite giraffes for breakfast, guided tours of the reserve are great fun, and the manor’s successful breeding programme means babies to coo over, aren’t unusual.

The fact that Rothschild Giraffes are an endangered species makes this experience even more incredible, and a night or two at the Manor is a great start or finish to a family safari in Kenya.

When to go
Giraffe Manor is open all year round. The best time for a Kenyan safari with kids is from June to October.

How to get there
Direct flights from the UK to Nairobi take from just under nine hours. Giraffe Manor is 30 minutes’ drive west of Nairobi Airport. 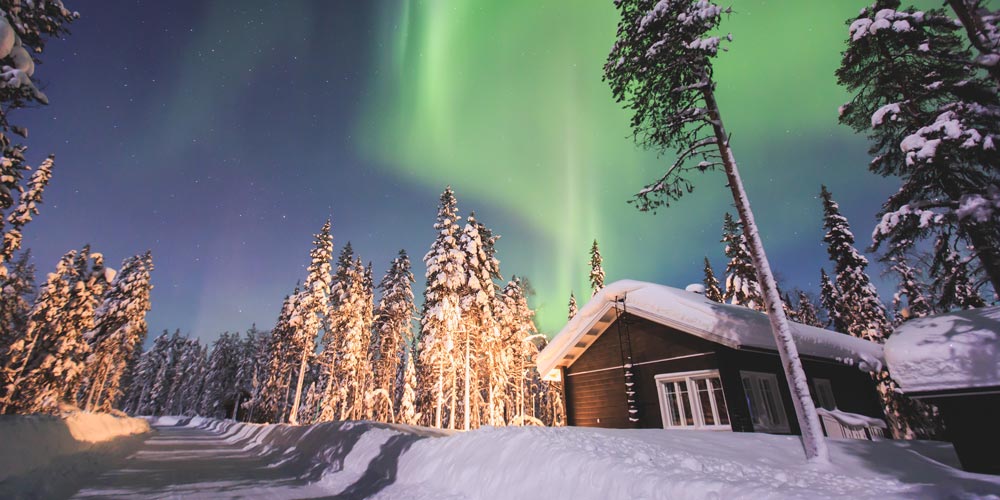 Abisko National Park in Swedish Lapland, is the closest you can get to remote, frozen wilderness without actually becoming an Arctic explorer.

This is where you’ll find Aurora Sky Station, said to be the best place on earth to see the Northern Lights. Perched on a mountain-top overlooking the vast, snowy blankness of endless Abisko, the station’s geared up for kids and supplies weather-proof overalls in all sizes. They only run the cable car to the observatory if a light show is guaranteed, so this is one bucket list adventure which never disappoints.

When to go
Northern Lights activity peaks during winter, the best time to visit Aurora Sky Station is between December and March.

How to get there
Flights from the UK to Kiruna in Swedish Lapland, take from five hours. Aurora Sky Station is just over an hour’s drive north west of Kiruna. 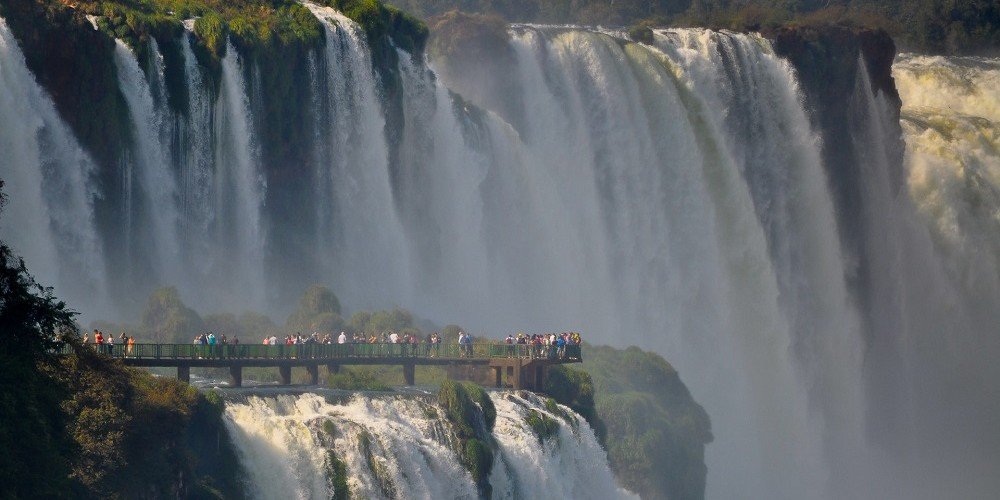 5/12 Hike the Iguaçu Falls in Brazil

Iguaçu Falls are so immense, Brazil shares them with Argentina. They’re also one of the New Seven Wonders of Nature, and if you’re up for a truly intrepid family adventure, navigating them as the Amazonian Indians always have, is the way to go.

The Poço Preto Trail involves a mix of hiking, climbing, jungle trekking and kayaking. The expedition is led by expert local guides, takes a minimum of four hours, and requires a fair amount of stamina so it’s best for older kids.

The falls are in Iguaçu National Park, a World Heritage site covering over one million hectares; 400,000 of which are primal rainforest. If hiking isn’t your thing, you can cross the falls on aerial walkways, or take a drenching cruise.

When to go
The best time to hike Iguaçu Falls is from March to September.

How to get there
Flights from the UK to Iguaçu Falls in southern Brazil take 11 hours and 40 minutes. 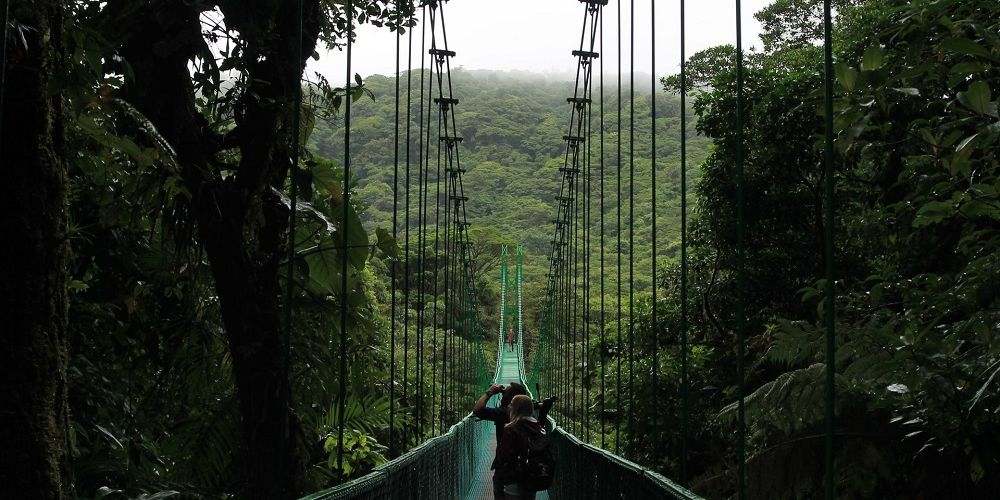 Little Costa Rica in its entirety should be high on any adventurous family’s wish-list. One of the rarest and best protected environments on earth, it’s home to sloths, howler monkeys, and all seven species of sea turtles, what more do you need to know?

But the top eco-experience of all is 10,500 hectare Monteverde Cloud Forest, a pristine reserve with over 500 bird and mammal species, more than 100 reptile species and 2500 different varieties of plants. For all its wonders, the virgin rainforest is amazingly accessible on aerial walkways, although ziplining the tree canopy is the biggest thrill and best by far for eyeballing the wildest residents.

When to go
December in Monteverde is dry and warm, but can be busy. July to September is good too and less crowded generally in Costa Rica.

How to get there
Flights from the UK to San Jose in Costa Rica, take from 14 hours. Monteverde is three hours’ drive south of San Jose. 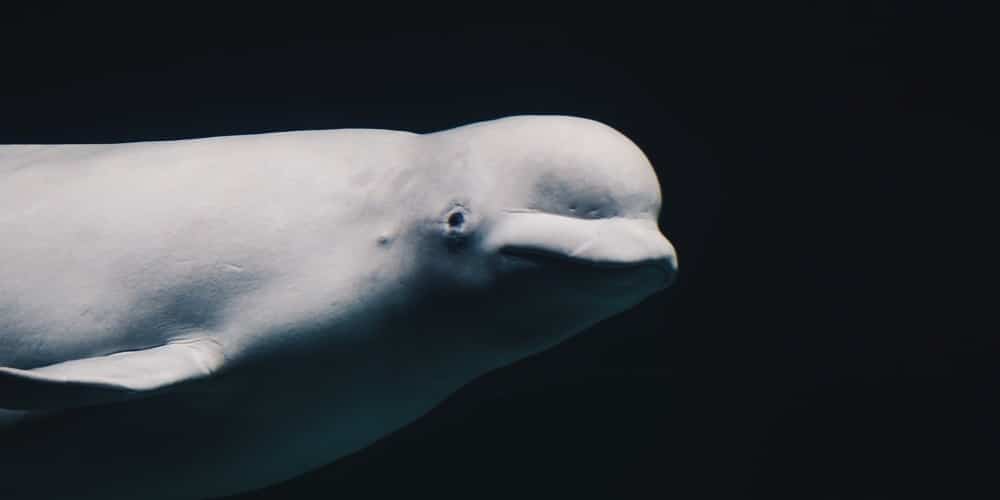 7/12 Kayak with Beluga Whales in Canada

Hudson Bay in the far north of Manitoba is top territory for spotting Beluga Whales. They’re known locally as ‘white ghosts’, but don’t let the ethereal name fool you, an adult male can reach up to four metres in length and weigh over 500 kilos.

Head to Churchill Town from July to August and you can take a kayak tour in the company of hundreds of migrating Beluga. It’s an astonishing experience and, imposing as the whales look, they’re gentle giants, so kids can get up thrillingly close.

When to go
Weather permitting, there are kayak tours daily in July and August.

How to get there
Direct flights from the UK to Winnipeg take from just under nine hours. Churchill is a two hour flight from Winnipeg. 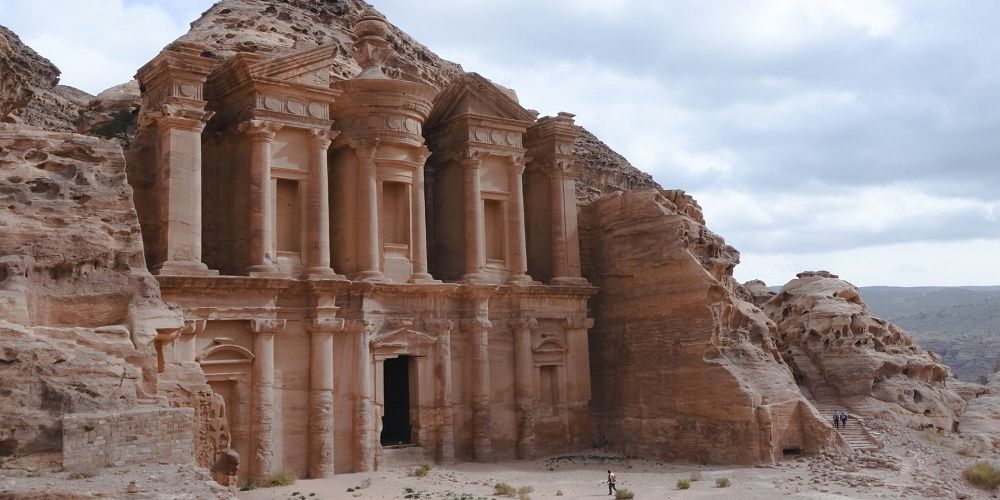 Petra, the ancient capital of the Nabataean Arabs, lay abandoned for over 11 centuries until it was discovered by European explorers in 1812. Even today, walking through the imposing Siq, visitors have the same sense of amazement when the magnificent city is suddenly revealed.

It’s a UNESCO World Heritage site, one of the New Seven Wonders of the World, and surprisingly easy to visit. There are all sorts of activities from candlelit vigils to Bedouin cooking classes, desert camel treks, guided hikes and walks. But just gazing on Petra itself, is an unforgettable family bucket list experience.

When to go
There are guided tours from Amman to Petra all year round. You can also travel independently, and the complex has several excellent family hotels.

How to get there
Direct flights from the UK to Jordan take five hours. Petra is three hours’ drive south of Amman. 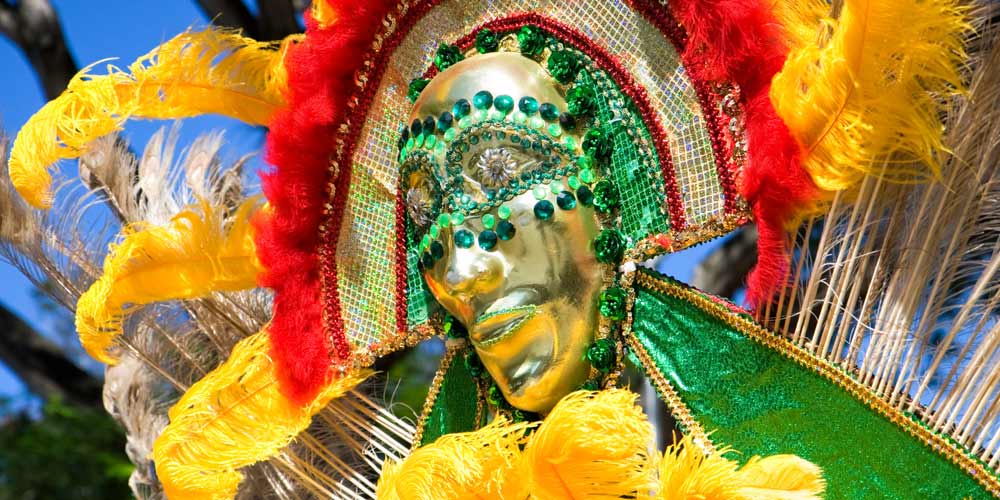 The Caribbean loves a carnival, and as far as the Bahamas are concerned, one is never enough, so you can catch the blazingly colourful, musical, dressed up and parade-crazy Junkanoo on Boxing Day, New Year’s Day, and during the summer too.

It’s one of the oldest, and many say the best, carnivals in the world, and very much a family event. Kids can join in the traditional Children’s Rush parade, but the Grand Parade is a spectacle just to stare at in awe. Locals take months to prepare, create costumes, decorate floats, tune-up and hone their moves, and the end result is fabulous beyond wildest imagining.

Junkanoo is celebrated all over the Bahamas, but the Nassau party is always the one to beat.

When to go
Nassau celebrates Junkanoo on Boxing Day, New Year’s Day, and in early May every year.

How to get there
Direct flights from the UK to Nassau take from just over nine hours. 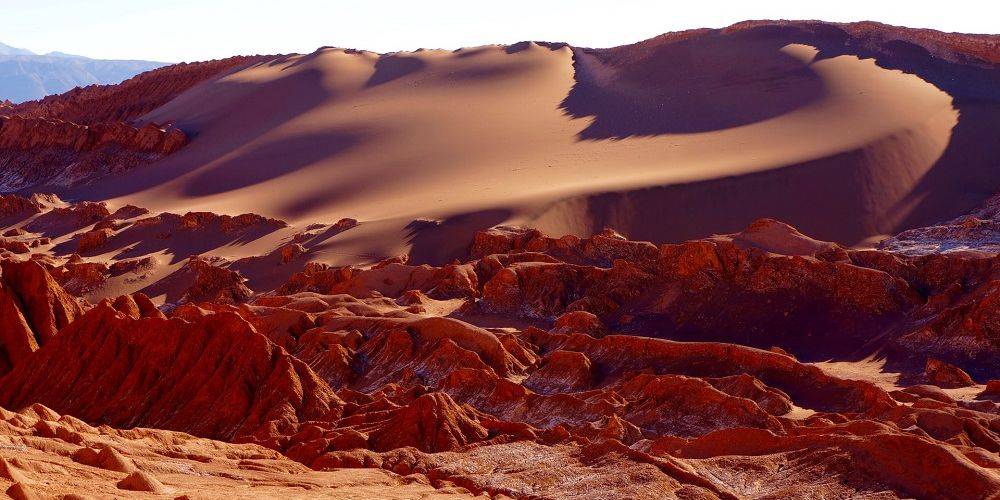 10/12 Stargaze on the Atacama Desert, Chile

Under 250mm of rainfall annually defines a desert; Atacama in northern Chile gets less than one millimetre of rain a year, making it the driest, non-Polar, place on earth.

Amazingly, it’s far from bleak, and more given to mighty hoodoos, canyons, mountains, and painted plains, than blank wilderness. Atacama is where to find the legendary Valley of the Moon, and gaze at officially the darkest Dark Skies in the world. The ALMA, Tololo, and Paranal observatories are all here and open to visitors. But for truly mind-blowing, bucket-list magic, take teenagers on a stargazing desert Astro-Tour from San Pedro de Atacama.

When to go
The Atacama Desert forecast is sunny and dry, forever, so any time is a good time to visit.

How to get there
Flights from the UK to Calama take from 39 hours. San Pedro de Atacama is an hour’s drive south east of Calama. 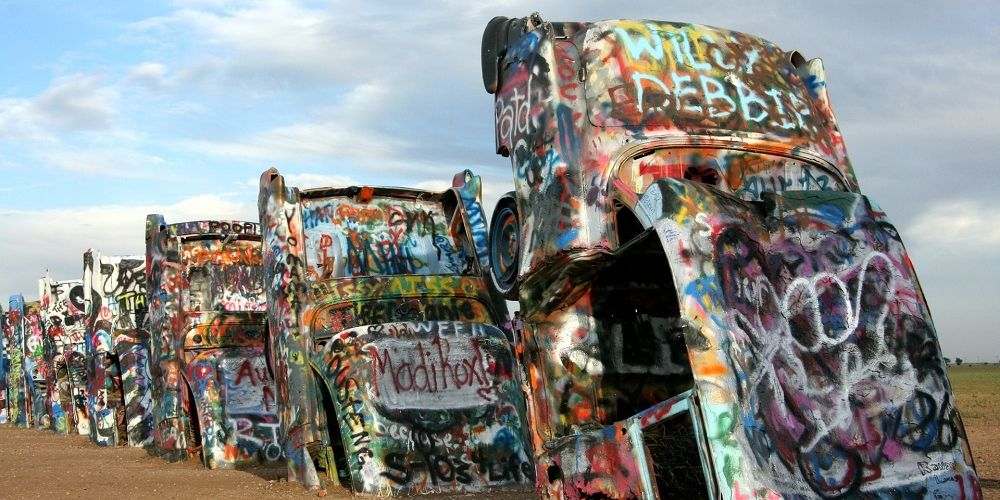 Nicknamed, ‘the mother road’, Route 66 runs from Chicago to Santa Monica and covers just over 5300km of iconic Americana from classic roadside diners and kitsch motels to grand cities and monumental landmarks.

The route crosses Illinois, Missouri, Kansas, Oklahoma, Texas, New Mexico and Arizona, before ending up in California. It can be done in seven days, but a fortnight is a better plan, or even longer, if you want to veer off for legends like the Grand Canyon and Las Vegas.

Naturally you don’t have to hire an RV for the journey, but if you want to go full US family road trip, you should.

When to go
You can drive Route 66 any time of year, but it’s most scenic and easy going in spring or autumn.

How to get there
Direct flights from the UK to Chicago take from eight hours and 35 minutes. 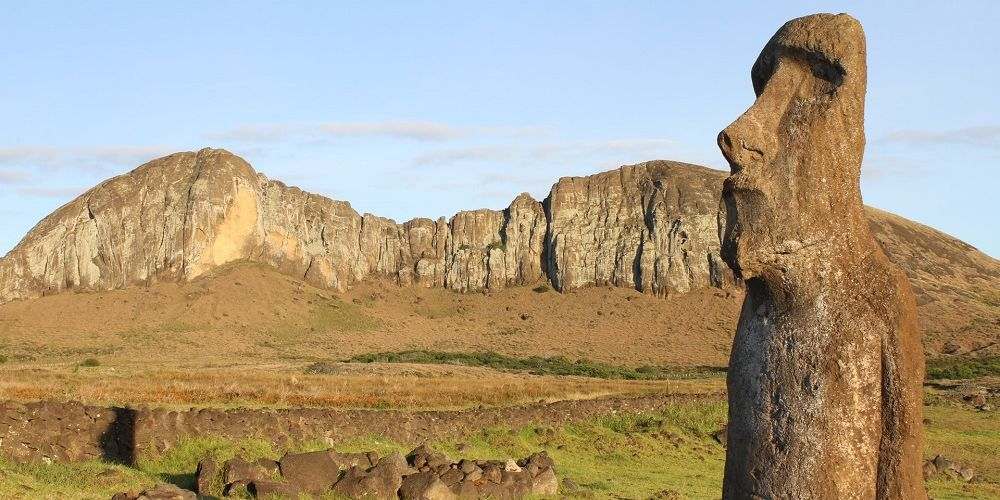 Rapa Nui, once known as Easter Island, floats in the South Pacific almost directly between Chile and Tahiti. Geopolitically it’s Chilean, but culturally, every millimetre is pure Polynesian.

This is where to see monolithic Moai, the primitive carved statues which continue to defy all explanation; kids particularly like the seven, with top knots, at Ahu Nau Nau beach. Apart from its startling landmarks, Rapa Nui is wildly beautiful, the ancient customs and rituals are mesmerising, the islanders couldn’t be more welcoming, and the snorkelling and surfing are fantastic.

When to go
January to March is best for Rapa Nui beaches, and the traditional Tapata Rapa Nui Festival in February is reason alone to visit.

How to get there
Flights from the UK to Rapa Nui take from just over 24 hours.

Want to be amazed closer to home? Take a look at dream family holiday rentals all over the UK to book right now. And don’t forget to follow Family Traveller on Instagram and Facebook for more half term (and beyond) ideas.