Discover summer breaks in Ottawa this year. They’re easy going, family friendly and amazing urban adventures for kids. Not that it’s all urban here, Ottawa isn’t described as Canada in One City for nothing. Take a look at what’s happening for summer 2022. 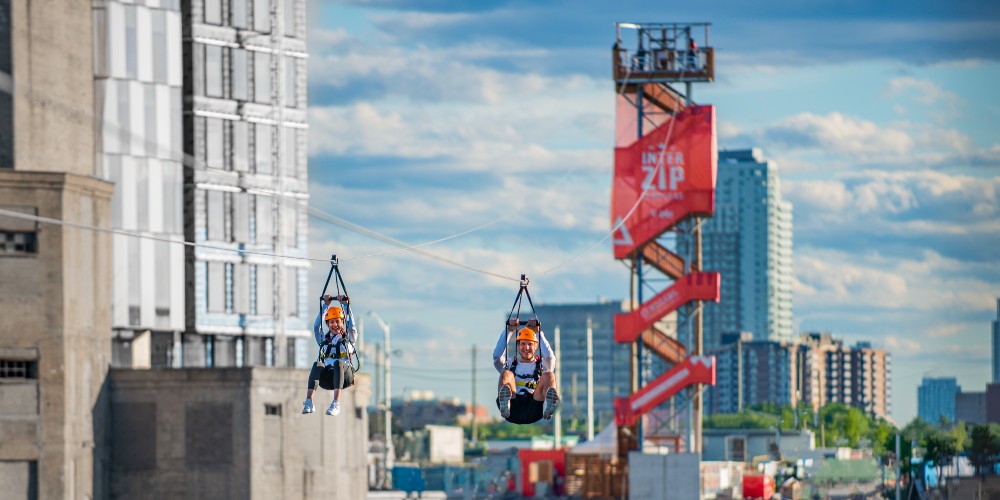 Ziplining from Ontario to Quebec on new Interzip Rogers, Ottawa

Between enormous city parks, pretty beaches, world famous canals and rivers, outdoors in Ottawa is truly great.  Family events pack summer from start to finish. The weather is warm and sunny. The city’s also home to most of Canada’s national museums and galleries. But even just exploring Ottawa’s neighbourhoods is great fun for kids. Take a look at what’s going on for summer 2022, as recommended by the experts at Ottawa Tourism. The 202km long Rideau Canal was completed in 1832. That makes it the oldest working waterway in North America and more than justifies its World Heritage status. Ottawa loves its legendary canal and uses it for everything from ice skating to cycling. It’s also a firm favourite for sailing in summer, which is when you can see one of its most astonishing phenomena: the Ottawa Locks.

The eight-flight locks connect Rideau to the Ottawa River. A great example of dramatic 19th century engineering, they’re still cranked by hand after almost 200 years. Sailing is permitted on the canal from May to October. So most summer days you can see Parks Canada staff expertly cranking the Ottawa Locks and watch as boats of all sorts sail smoothly from one great city waterway to the other. 2/5  Be amazed by the Summer Solstice Indigenous Festival

The summer solstice is celebrated worldwide on 21 June. However, the Summer Solstice Indigenous Festival in Ottawa runs from 21 to 26 June 2022.

The ancient spirit of Pow Wow is at the heart of this unique event. Which means guests can look forward to sharing, singing, dancing, eating and having a great time. It’s free and there’s a brilliant Family Fun Zone which can include anything from stilt walking, drumming or ziplining to picking up some Algonquin.

The festival is essentially a celebration of the indigenous culture which still thrives in Canada today. So there are also singing, dancing, drumming competitions. Families can see First Nations, Métis and Inuit artists and artisans at work and the food is always fabulous.

If you miss the festival itself, there are lots of other ways to explore indigenous culture all over Ottawa this summer.

Find out all about the Summer Solstice Indigenous Festival 2022

What’s 425m long, 37m high and goes at 40kmph across the Ottawa River? It’s the brand new Interzip Rogers double zipline which rides from Ontario to Quebec. The first and only zipline in the world to connect two provinces it’s also a summer-only experience.

Panoramic doesn’t even begin to describe the view you get sailing between downtown Ottawa and Gatineau at a height of 37m. The lines are parallel, perfect for families and there’s no age restriction. Although it’s probably better suited to older kids and teens. 4/5 Pack some pirate adventures into summer breaks in Ottawa

Mooney’s Bay Beach is one of the great beaches which make summer breaks in Ottawa so right for families. As well as being sandy, it has lifeguards and is the place to find one of the city’s top heritage experiences: A Pirate’s Life Theatre.

This 75 minute family cruise is aboard a full scale buccaneers’ galleon. It’s about as real as it gets in terms of shivering young timbers and incredible fun. Kids can expect dress-up and face painting, sword fights and water cannons. Piles of sunken treasure and plenty of cheerful pirate-y types give it their all in a bid for authenticity. Plus, back on Mooney’s Bay Beach, you’ll find everything from volleyball to swimming and boating to fill the rest of your day. Every great city has a spot of haunting going on and Ottawa is no exception. In fact one of the most haunted buildings in North America is in the city. So no surprise to discover that Ottawa Haunted Walks are truly chilling.

Book a Ghosts & the Gallows Tour with older kids. Then join your cloaked guide on a terror tour which takes in old Carleton County Jail: North America’s most haunted. Steel your nerves for a walk through cellblocks, death row and a close-up encounter with Canada’s last working gallows. Legend has it that the man hanged here in 1869 for the murder of politician Thomas D’Arcy McGee, was perhaps innocent and so haunts the jail to this day.

Was he guilty? Tour Carleton, hear the evidence and make up your own mind.

Explore the eerie world of Haunted Walks in Ottawa this summer

If you’re ready to plan a summer break in Ottawa, start with a visit to Ottawa Tourism. You’ll find everything you need from information on what to do and see on holiday with kids to finding the best family accommodation.