Ever wondered what happens to free-spirited adventurers when they hang up their boots and swap backpacks for babies? Chances are, if their wanderlust is for real, they manage to find a way to involve kids, cut down on roughing it, and open their minds to all sorts of new, child-shaped experiences.

That certainly seems to be the way it’s worked out for Selective Asia, whose passion for the world’s most mysterious continent hasn’t been waylaid one bit by their passion for parenthood. In fact, if anything, children have inspired some of their most inventive tailor-made family holiday ingredients: think Malaysian jungle riverboat cruises and elephants on safari in Thailand.

But the ‘selective’ in Selective Asia is more about what you want from a custom-created family holiday in the lands they know and love like locals. So who better to hand out advice on wonderful wildlife experiences in Asia for kids, from Indonesia to Cambodia? 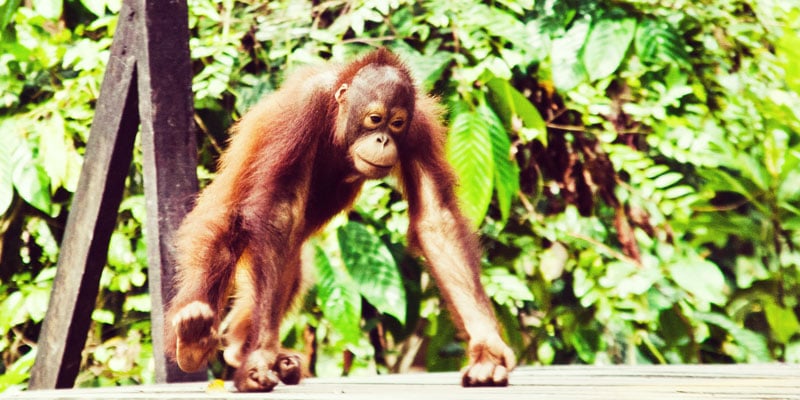 Don’t believe anyone who tells you they don’t mind missing out on orang-utan in Borneo. The iconic apes with opposable thumbs and opposable toes are on everyone’s wish list, always. But sightings in the wild are rarer than you might think: orang-utan are the world’s largest arboreal apes and spend almost 100% of their time hanging out in treetops. Which only makes the up-close encounters at Sepilok Orang-Utan Rehabilitation Centre all the more remarkable.

Sepilok is one of the world’s most highly respected sanctuaries, caring for orang-utan orphaned and injured as a result of industrial deforestation across northern Borneo. Here apes live as close to nature as possible, concealed in lush, leafy forest canopies. But, time a visit for the afternoon milk and banana feast, and it’s show time – macaques are almost as keen on snacks as their orange counterparts. Just make sure devices are charged and primed for this moment: kids won’t stop talking about it, but you’ll never get tired of looking at their astonished expressions.

Find out more about orang-utan encounters in Borneo with Selective Asia. 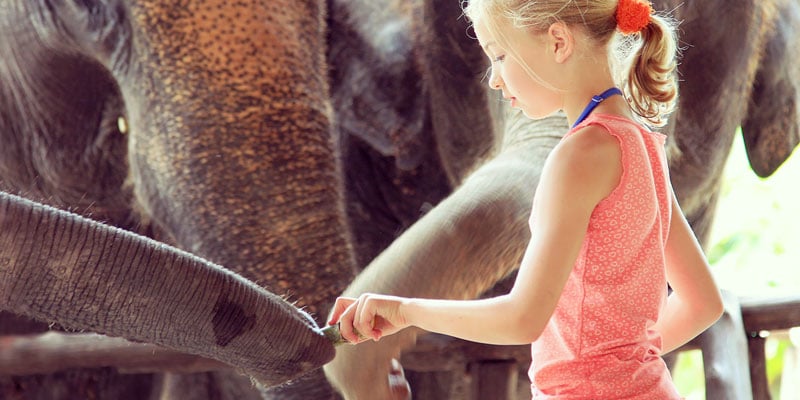 There are countless ancient myths surrounding Thailand’s elephants, but one of the more modern is easy to debunk: you don’t need to travel to the far north of the country to see them. In fact, the best place to encounter elephants responsibly in Thailand today is Elephant Hills, in the south, just over two hours drive from Phuket’s beaches.

Surrounded by Khao Sok National Park, the world’s oldest evergreen rainforest, kids can interact with rescued elephants, observe elephants in the wild and even help out at elephant bath time: messy, muddy and amazing. Wildlife safaris and luxury lakeside camping are just two good reasons to build a few days stay into a holiday here and everything from kayaking and jungle hiking to snorkelling and wild swimming – plus all the elephants, of course – make it a perfect adventure for older kids and teens. 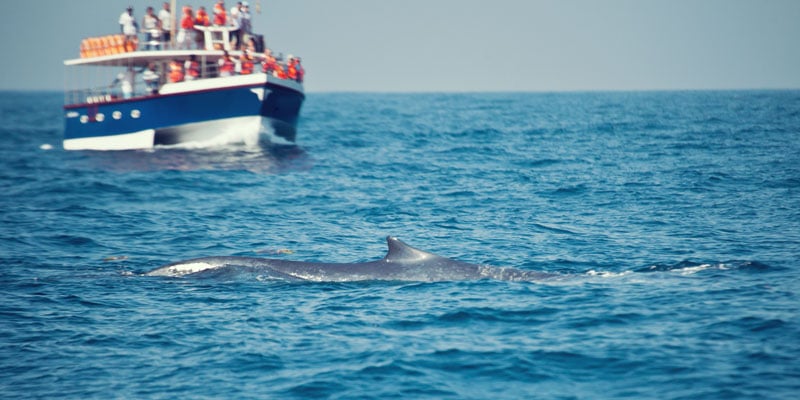 If whale spotting and iceberg strewn seas are inextricably bound in your mind, break free. The lesser known south coast of Sri Lanka is now recognised as one of the world’s major migratory routes for Blue, Killer and Minke Whales – along with their entourage of dolphins, sea turtles and flying fish. It’s still enough of a secret to make the experience as astounding as it should be: masses of whales, not masses of tourists.

Visit from November to April, daily sailings are guided by local fishermen who know the waters and the ways of migrating whales better than anyone. And if kids are likely to miss getting togged up in Arctic kit for the experience, the potential for breaching whales is fairly high and could justify a splash jacket – even under a warm Sri Lankan sun.

Find out more about whale watching in southern Sri Lanka with Selective Asia. 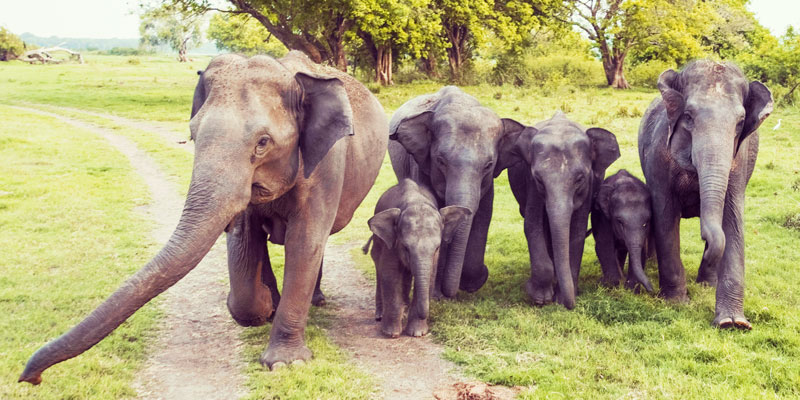 Sri Lanka’s annual Elephant Gathering is a natural event right up there with the Serengeti’s Great Migration and the Dance of the Cranes in Mecklenburg-Vorpommern, and just as difficult to believe until you see it with your own eyes.

Every year, between May and November, thousands of majestic beasts walk the Elephant Corridor to the heart of Minneriya National Park in search of water. At the peak of the dry season seeing upwards of 100 elephants in a single afternoon isn’t unusual – August and September are top months for spotting cute new babies. Phenomenal as the experience is, and justifiably famous, it’s nowhere near as touristy as the likes of the Great Migration. Awe-struck fellow travellers rather than hordes of jeeps are what to expect, which makes the atmosphere friendly and relaxed, even for younger kids.

Find out more about seeing the Elephant Gathering with Selective Asia. 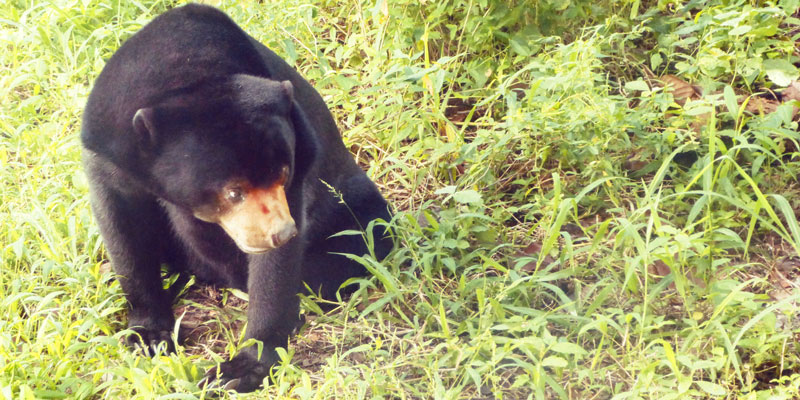 Spotting the difference between Cambodia’s Moon Bears and Sun Bears is pretty easy: Moon’s have a white ruff, the Sun’s ruff is golden (hence the names). Protecting these marvellous creatures has turned out to be more difficult. Hunting’s been outlawed by the Cambodian government for decades and penalties are harsh, but poaching is still a major issue and almost impossible to police in rural regions.

For almost 30 years, Free the Bears Centre has provided sanctuary and care for thousands of endangered Sun and Moon bears. At a single time there can be up to 130 animals in residence and a day on team-bear-care is fantastic for kids. It’s also one of those rare experiences that sneaks quite a bit of learning in with the fun and helps develop an understanding and awareness of conservation’s bigger picture.

Find out more about Cambodia’s Free the Bears Centre with Selective Asia. 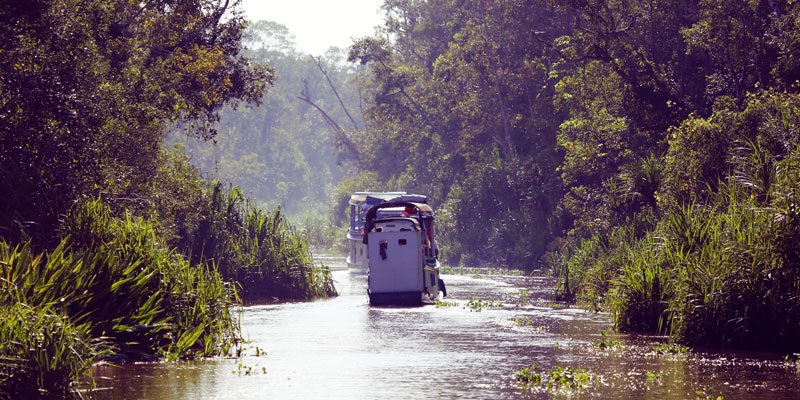 Indonesia’s the world’s largest archipelago so if one or two islands have slipped under the radar that’s entirely understandable. Kalimantan is the Indonesian southern portion of Borneo, but makes no distinction in terms of stunning wildlife. It’s still the land of orang-utan, macaques, proboscis monkeys and, occasionally, even leopards. The jungle resounds with the same relentless wild chatter day and night. And rivers wending and winding everywhere are no different in Kalimantan than in Borneo proper.

Jump aboard a traditional klotok in Tanjung Puting National Park and let kids see for themselves on a riverboat safari. They’ll spend days spotting wildlife on the banks and visiting local legends like Camp Leakey Orang-Utan Foundation. The rainforest hubbub is a strangely wonderful travelling companion and local guides provide all knowledge, fun facts and pretty much endless child-size entertainment.

Although, sleeping aboard a boat on the whispering river under a huge Indonesian night sky could turn out to be the most magical childhood memory of all. 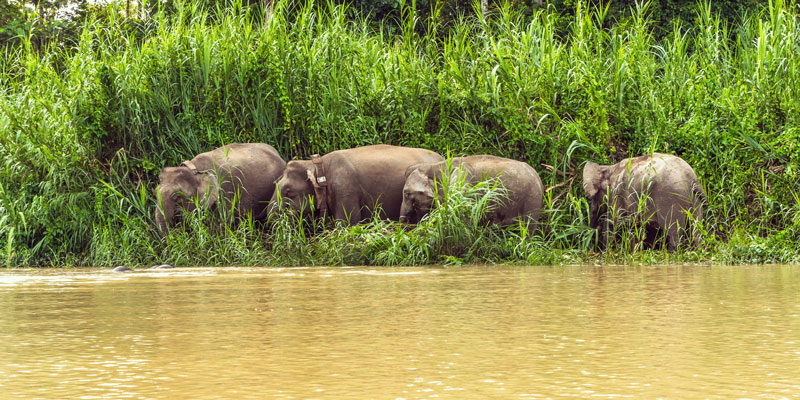 The 560 km long Kinabatangan River is the longest in Malaysia and is one of the most dynamic in the world, when it comes to wild experiences. Flowing from the mountains of southwest Sabah to the Sulu Sea, its mesmerising route is never far from astonishing sights along the jungle riverbank and across slow flowing waters.

Rare Sumatran rhino aren’t so rare on a Kinabatangan wildlife cruise. The distinctive call of the gibbon is often the precursor to a personal appearance. Keen eyed kids have been know to glimpse pygmy elephants, and sinister Borneo River Sharks aren’t the only weird and wonderful sailing companions. But nothing compares to the experience of being part of the river 24/7 and the inky black, noise-filled mystery of night could very well be the biggest adventure of all for young voyagers.

Find out more about Kinabatangan River wildlife with Selective Asia. 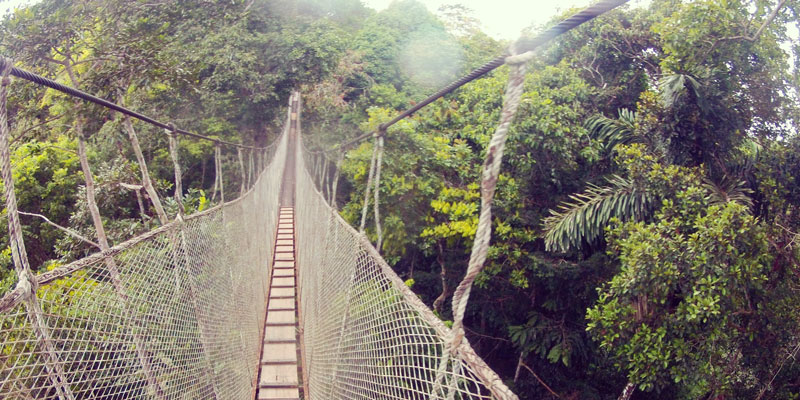 The 130 million year old Taman Negara rainforest is where kids will literally have their heads in the clouds on the world’s longest forest canopy walkway. If they can tear their eyes away from the lush leaf cover and the incessant noise made by some 350 different species of birds, a quick glance at the forest floor could reveal quite a few other reasons why this national park is considered to be one of Asia’s finest.

From clouded leopards to Indo-Chinese tigers, Asian elephants and Sumatran rhino, several of the world’s most endangered species call Taman Negara home. Admittedly, chance sightings are rare, but even the possibility’s thrilling for kids. And any potential disappointment is usually balanced by the excitement of a night walk where fruit bats and macaques are more than happy to make themselves known to sharp-eyed young explorers wandering through the vast limestone caverns after dark.