When you take kids to Ottawa in 2022 we guarantee they’ll be thrilled by the city’s wild parks and pretty beaches. But surprisingly it’s often Ottawa’s incredible family museums that excite them most. Find out why. Woolly Mammoths outside the Canadian Museum of Nature, Ottawa

You don’t have to take kids to Ottawa for long to understand why it’s often called Canada in One City. There’s untamed wilderness in the shape of enormous Gatineau Park. Sandy beaches edge the mighty Ottawa River and the long Rideau Canal does everything from winter skating to sailing in summer and cycling year-round. You’ll find a mix of fresh thinking and formidable history in downtown Ottawa, as well as fantastic food. And if you need more reasons to put the city on your 2022 summer vacation shortlist, try its wide choice of family hotels.

However, when it comes to things to see and do, it’s Ottawa’s family-friendly museums which really amaze. Canada keeps no less than seven national museums in the city. They’re all close to Parliament Hill and every one is recommended by Ottawa Tourism for a firm focus on family fun.

To find out where everything started – in more ways than one – put the Canadian Museum of Nature top of your must-see list.

It was the first National Museum opened in Canada and traces earth from its origins to the wonders of today’s indigenous wildlife. Of course, the dinosaur diorama is an obvious crowd pleaser. However, this family museum even manages to make fossils and bones fascinating for kids. Look out for the skeleton of the enormous Daspletosaurus, older cousin of the more famous T-Rex.

The original building was stately enough to have housed Parliament at one time. Although the ‘Queen’s Lantern’ tower built in 2010 is an impressive new addition. Don’t forget to look up at the colossal sculpture of the moon erected for the 50th anniversary of the Apollo 11 lunar landing.

What kids love best about the Canadian Museum of Nature 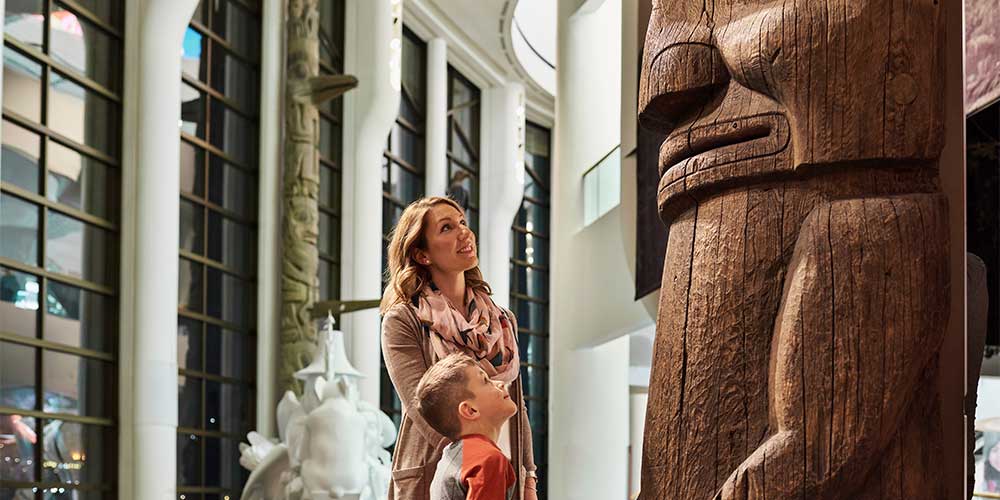 Spend some time at the Canadian Museum of History and you’re in very good company. This is the country’s most visited museum and it doesn’t take long to see why.

More than 20,000 years of history are recorded here in enthralling detail. Creatively designed exhibition spaces include the First Peoples’ Hall and immense Canadian History Hall. The Grand Hall alone, holds the world’s largest indoor collection of totem poles and the museum building itself is another marvel.

What astonishes kids most about the Canadian Museum of History

Discover more to astonish kids at the Canadian Museum of History Every parent knows it’s almost impossible to answer kids’ daily round of questions. So catch a break in Ottawa and let the Canada Science & Technology Museum do the work.

The museum was completely redesigned in 2017, then reopened in time for its 50th anniversary the same year. It might be a venerable institution in terms of years, however, its approach is very fresh. Think stealth education through activities, experiments and interactive experiences and you get the idea. Just remember to pay attention too. Because a few hours here will definitely lead to some in-depth questioning later. Buckle up for the amazing Canada Aviation & Space Museum, Ottawa

Canada Aviation & Space is the country’s biggest aerospace museum. It’s designed inside a vast hangar-style building and packed to the rafters with exhibits. Here, kids can delve into the history of aviation from first flights to Canada’s role in space exploration. However, if that isn’t thrilling enough, you could always book a flight on a vintage biplane or helicopter to see Ottawa from above.

What thrills kids about the Canada Aviation & Space Museum

Find out more about the Canada Aviation & Space Museum in Ottawa The Canadian War Museum focuses on the theme of regeneration. Take a minute to check out the impressive building before you head inside. Not only is it eco-friendly right up to its ‘green’ roof, it also contains some of Ottawa’s most interesting windows. Look for the Morse Code which spells out, ‘Lest We Forget’.

The interior design lets visitors naturally interact with the space. So just go with it and take your time. There’s a lot to see from the Regeneration Hall to LeBreton Gallery’s collection of military vehicles, and aircraft. As well as permanent exhibits, the museum hosts visiting exhibitions and year-round family activities.

How the Canadian War Museum engages kids of all ages

Learn more about the extraordinary Canadian War Museum in Ottawa Interact with amazing art at the National Gallery of Canada, Ottawa

You can’t miss the National Gallery of Canada, it’s one of Ottawa’s most striking new buildings. Although the architecture outside is nothing compared to the art indoors.

As well as the country’s largest collection of Canadian art, the National Gallery houses the Canadian Photography Institute. However, its range of international, Asian and indigenous art is equally remarkable. And if you’re in Ottawa at the weekend, don’t miss Family Art Adventures on Family Sundays.

What kids love about the National Gallery of Canada

Ready to take kids to Ottawa? Start making plans with a visit Ottawa Tourism for information and practical help on everything from what to do and see on vacation to finding the best family accommodations.