Paultons Park has a new £9m attraction which invites families to travel back in time on a Jurassic adventure. The Lost Kingdom, which is open now, features two new family rollercoasters, as well as animatronic dinosaurs and a Jeep expedition. Family Traveller’s Emma Kirkham travelled to Hampshire with the kids to check out the exciting new attraction.

‘We’d heard about Paultons Park some time ago. We really had meant to visit the home of Peppa Pig World (it’s within the grounds of the park) when the kids were toddlers, but as can be the way, we just never got round to it. Then, hurrah! An invite arrived for us to check out the new ‘Lost Kingdom’ world there. I reassured my seven-year-old that, yes, we can see Peppa Pig World, too (I do still catch him secretly watching it sometimes after school). But this trip is going to be even more exciting, as it is all about the dinosaurs.

‘We were definitely going to make the most of this, so after a night in a local hotel we were champing at the bit to get in and check out all the excitement when the doors opened. We were in for a great surprise. The Lost Kingdom, Paultons’ newest ‘world’, was huge, with lots of rides – some even a pretty scary prospect for me and Annie, who is nine and spends her spare time watching YouTube videos of ‘the world’s craziest rollercoasters’.

We found two rides in particular that satisfied: the swirling Boulder-Dash, where Bea, just turned four, was convinced she was going to crash into Daddy at every turn; and ‘Dino Chase’ a triceratops-headed rollercoaster that thrilled every one of our four-strong junior gang, aged four to nine. I counted that we all went on it 12 times, and by the final ride, Noah, nine, and Ed, seven, had become best buddies with the friendly lad running the ride (hi, Luke!). Only a promise of the log flume could prise them away. 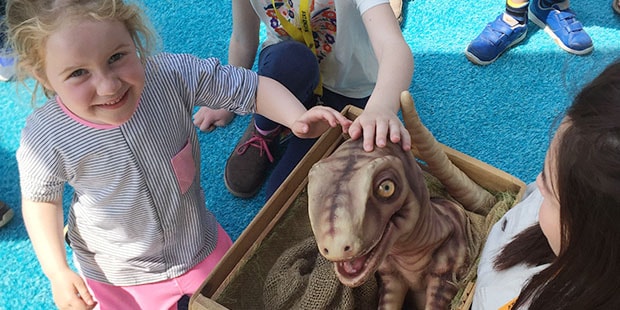 ‘After getting soaked we returned to feed a T-Rex (too scary for Bea, but great fun for the eldest three). We also met mascot Roary, the cutest baby dinosaur, who we got to cuddle. Unfortunately, we weren’t allowed to take him home – how much fun would a real-life dinosaur in our house be?!

‘The day whizzed past, a blur of Peppa Pig’s Windy Castle, chair-o-planes (both a good, airy idea after getting soaked on the log fume) and more rollercoasters.

‘It was only as we were about to get our cossies out of the lockers for a splash in the waterpark that we realised it was 5 o’clock already – the day had flown past, and we had run out of time! In the car on our way home, we passed our hotel and I wished we could have stayed an extra day – there was just so much at the park that we didn’t get to see. But we will be back, next time for two whole days – although I doubt we’ll get away without buying a toy Roary in the gift shop a second time.’ 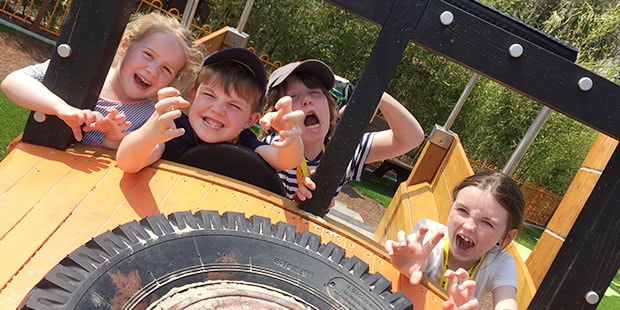 The kids show off their best roars

What’s new in the Lost Kingdom?

Book and find out more

Looking for more awesome days out for families? Don’t miss the coolest new attractions opening in 2016.