Cornwall by campervan with three kids and a dog in tow could easily have gone wrong. For Sam Bradley and family it couldn’t have gone better, even when tiny village streets tested the driver to his limits! Take a look. 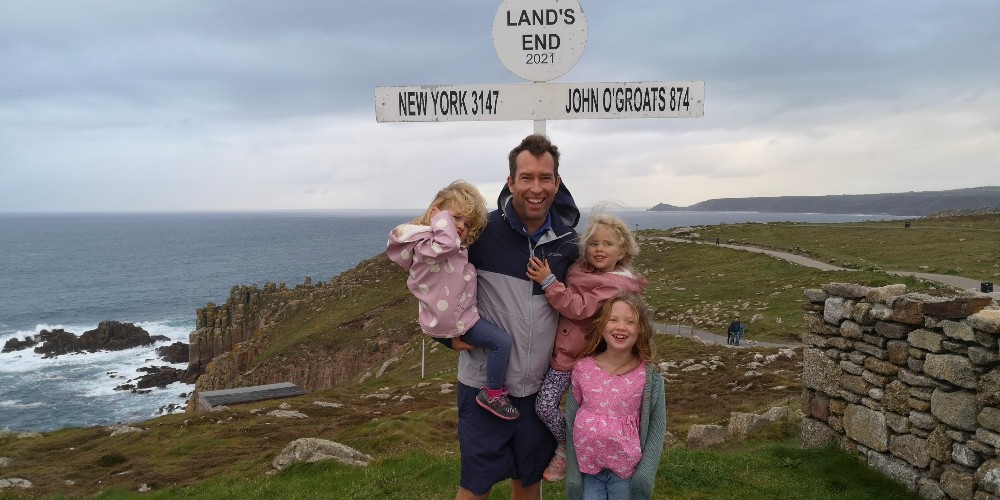 I have many hidden fears, most of which I’d prefer to keep that way. But one that I’m willing to share involves myself behind the wheel of a large campervan. I’m on a narrow dirt road and I’m hastily trying to reverse out of the way of an intimidatingly large farmer!

So it may come as a surprise to find our family of five boldly deciding to spend a week touring Cornwall in a campervan. Clearly the allure of over three hundred beaches and plentiful ice creams is not to be underestimated.

As a campervan expanded our choice of places to visit, the first challenge was narrowing a plan down to something doable in seven-days. Especially since our youngest was still in nappies and we were bringing our dog Molly along as well.  Most itineraries suggested starting in the east of Cornwall and moving around in a clockwise direction. Yet, for no apparent reason apart from obstinacy, we decided to start in the north and go anti-clockwise. 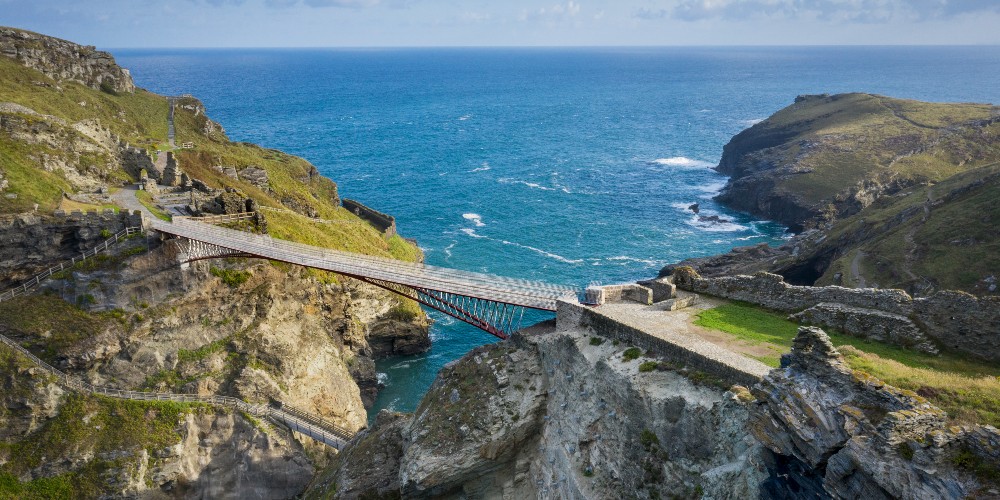 Point your campervan in the direction of Tintagel Castle

With the campervan collected and affectionately named Snoopy, I tentatively steered us towards our first destination. Our eldest daughter is 8  – or 18 judging by some of the sass – and prone to boredom, so the more intellectual stimulation we could provide the better.

First up was history, in the form of a visit to Tintagel Castle. This palace-like structure had been built on the site in the 5th or 6th century. Then a castle was built on the same site in the 13th century, by Richard, first earl of Cornwall. Tintagel also has links to Arthurian legends, so our kids had great fun trying to pull the sword out of the stone from a life-sized bronze sculpture. We particularly liked the fact that it’s all outdoors, here and there’s a beach and a dramatic entrance bridge which makes it all the more exciting. 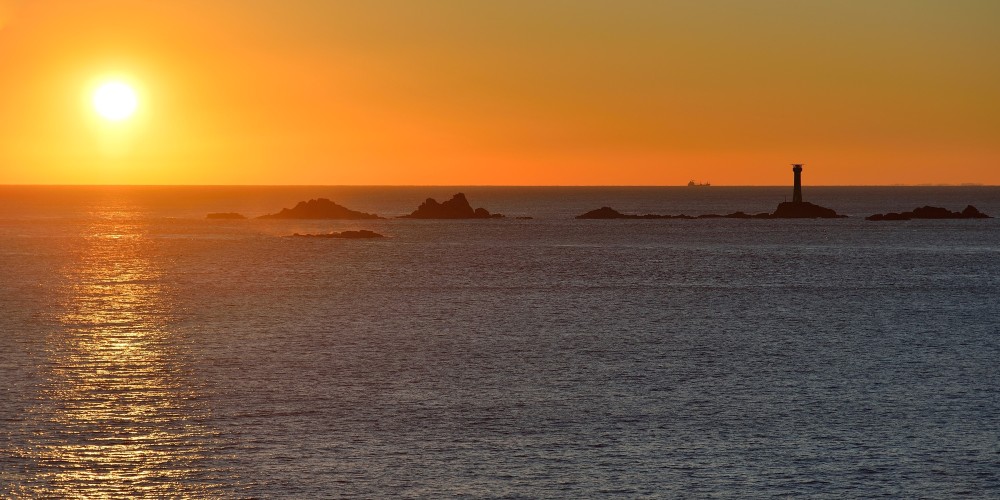 Next morning we headed south towards Land’s End. Had the weather been warmer and the holiday longer we’d have stopped off at picturesque beaches like Polzeath, Newquay and St Ives along the way. But as time was of the essence we headed straight for Cornwall’s westernmost point instead.

Named ‘Belerion’ or Place of the Sun in ancient Greek times, Land’s End is a good spot to watch the sunset over Longships Lighthouse and the ocean. However, with nothing to the west except the wild Celtic Sea, it’s wise to pack an extra jumper against the storms and winds that often buffet this coastline.

As usual with young children, the manmade attractions proved to be infinitely more appealing than the scenery. We can recommend the miniature village, ice cream shop, swings, and 4D cinema. Although the ‘farm’ wasn’t much more than a few ponies and alpacas! 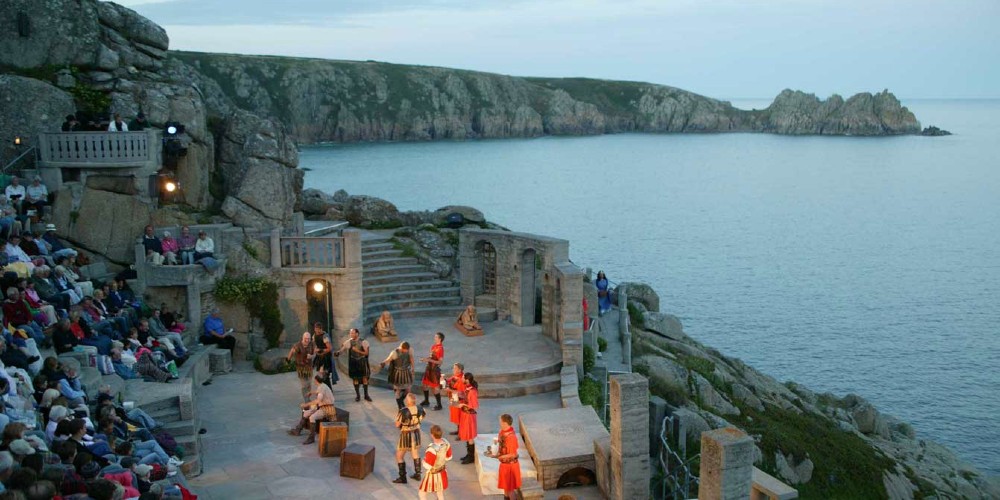 Always arrive early at Minack Theatre with a campervan

The next stretch of coastline is, to my mind, the most fascinating part of Cornwall and should be included in every itinerary no matter how short. Less than five miles from Land’s End lies The Minack Theatre. One of the most spectacular open-air theatres in the world it’s carved into a granite cliff set in beautiful gardens with stunning views out over Porthcurno Bay. School holidays meant there was a children’s show on every evening and we were determined to visit.

It proved to be a day which illustrated both the best and worst of campervan life. While buying the theatre tickets over the phone we were told by the kind saleslady that the route to the theatre included a steep incline, some narrow stretches and a few sharp turns. Nothing unmanageable, but probably not much fun with an impatient queue of cars in either direction, so we were advised to get to the venue at least two hours before the performance. 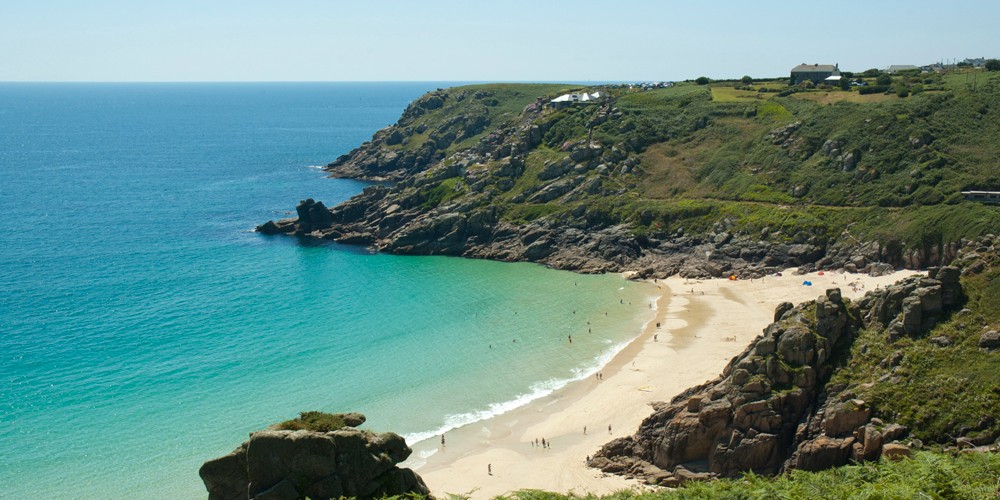 Van life comes into its own on Cornwall beaches

Such quirks are just part of a campervan trip, but on the positive side, that day would have been very difficult to get through without the van.

Just before noon we arrived at Porthcurno Beach with one child hungry, another wanting the loo and the youngest one grumpily needing a midday nap. In short, just another day of parenting bliss. The Cornish weather was also treating us to a quick midday shower, but instead of sitting miserably in the rain we solved all those problems in the campervan.

Mission accomplished, two hours later the weather had cleared and we had kids and dog happily gallivanting round the beach and building sandcastles.

Later that evening, having dutifully arrived early as instructed, we were able to enjoy a memorable sunset overlooking the bay. The Minack Theatre setting mentally transported us to Ancient Greece, while the “Horrible Histories” actors dramatically led us through some of the gorier aspects of life in early Britain. It was a lovely evening all round. The show provided a resounding tick in the drama column for our eldest daughter and there were lots of awkward questions about medical practises in the Georgian era from the younger two. 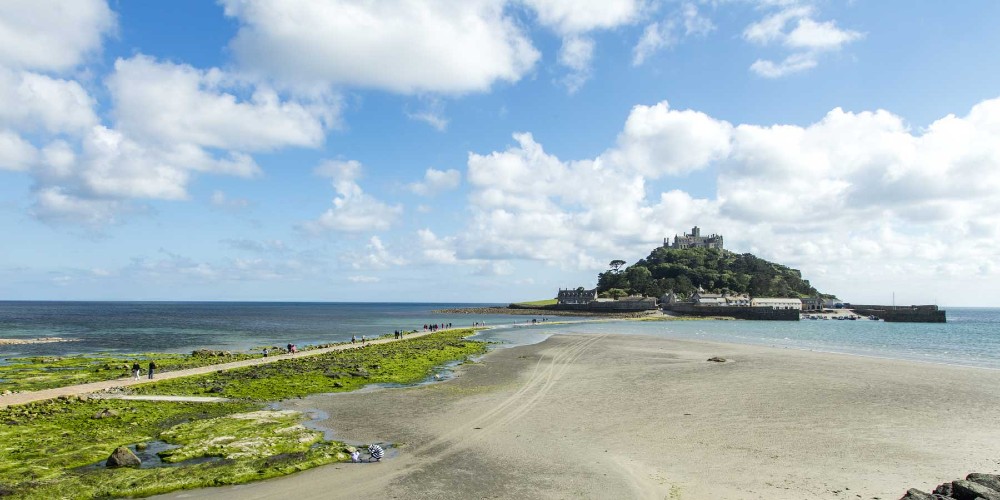 Marazion and St. Michael’s Mount make a perfect day out

It was with no small amount of trepidation that I approached our next stopover, as this was the one night we weren’t paying to be in a designated campsite.

Instead we found ourselves parked in a quiet field close to the peaceful little village of Treen, enjoying one of the most relaxing and rule-free stopovers of our entire holiday. Most of my concerns were quickly quelled. Yes, it’s legal, and safe, and the campervan had enough battery power and water to go off-grid for a few nights. I wished we’d been brave enough to chance a few more stays like this along the route, especially factoring in the saving of up to £40 per night charged by most campervan sites.

Feeling very pleased with ourselves, we continued our journey to Marazion and its famous tidal island of St Michael’s Mount. At low tide the half a mile of cobbled causeway to the island makes for a scenic walk, and from April to October there are also ferryboats available for tired little legs.

The historic 12th century castle and terraced gardens are well worth exploring. Plus, the beach looking out towards the castle is big, flat and perfect for  playing. The castle is run by the National Trust and free for members, but it’s very popular so make sure you book tickets in advance. The National Trust also runs many of the smaller gardens and estates we used as impromptu pitstops on our trip, and I can honestly say a family membership saved my sanity on many occasions. I’ll even go so far as to say that as a non-Brit who only moved to the country later in life, the National Trust easily makes my list of top three things I love about life in the UK. 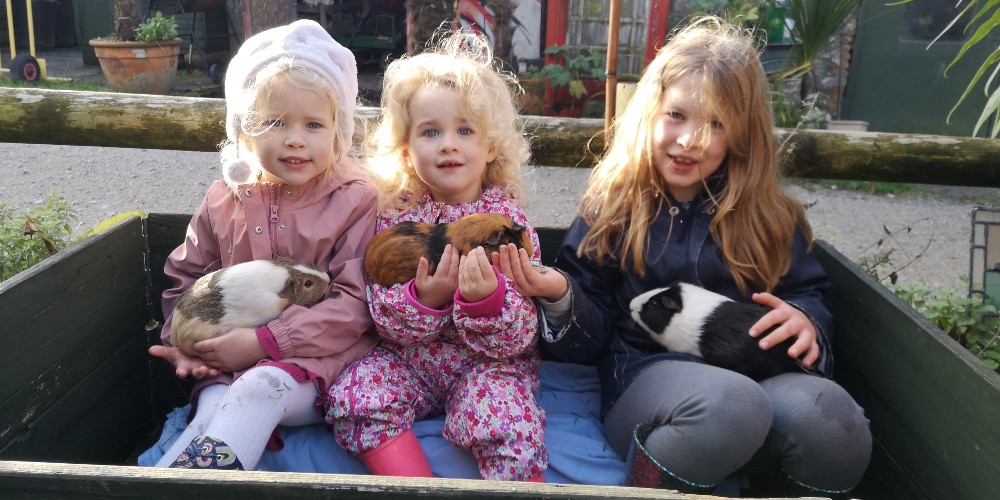 Not always Cornwall’s beauty which impresses kids most

Take your campervan off-grid in Cornwall from time to time

Having seen the most westerly point of England, we now proceeded to its most southerly, Lizard Point. Most of the campervan sites we had stayed until now were rather bland and forgettable and often rather like giant car parks. That all changed at Henry’s Campsite. Boasting oodles of quirkiness and character as well as beautiful views over countryside and ocean, our only regret here was not having booked for longer. Good to know the site also has a whole menagerie of chickens, alpacas, and rabbits to keep kids entertained.

The Lizard Point lookout itself is also run by the lovely National Trust and worthy of a quick stroll, photo and another ice cream. Our eldest daughter enjoyed learning about the geology of the peninsula as it’s Britain’s only ophiolite – section of oceanic crust now found on land. This explains some of the unique features of the area, such as the serpentinite rocks and Cornish heath shrub. 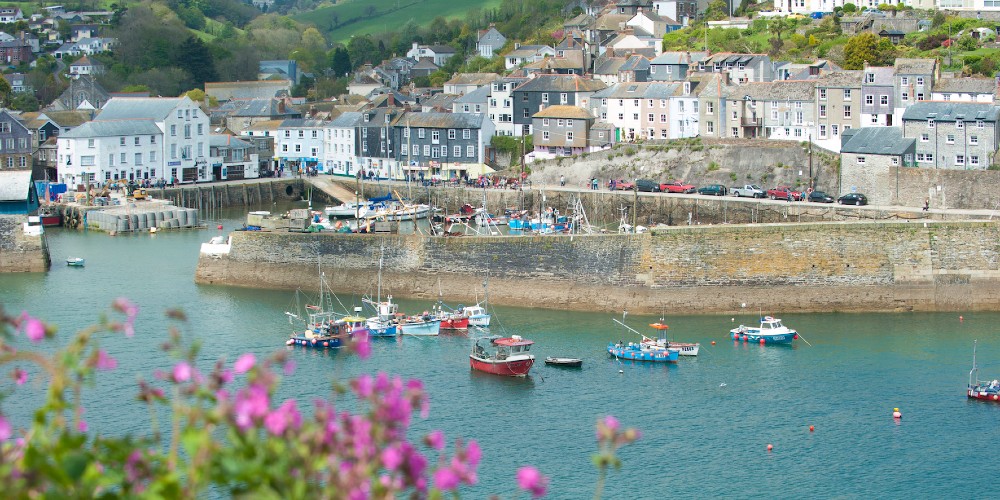 Pleased to say ‘Snoopy’ even passed the Mevagissey test!

Sadly, our holiday was rapidly drawing to a close. Until now we’d managed to avoid my nightmare scenario of getting a big van stuck on a small road. However, the narrow streets of Mevagissey certainly put that to the test.

We added the town as a final stop due to its description as a traditional fishing village, as well as its proximity to the Lost Gardens of Heligan. Snoopy came equipped with a GPS which had been calibrated to its dimensions, so in theory we’d never end up on a road too narrow to handle, although Mevagissey came close.

We had to drive through the village at a snails’ pace with both wing mirrors folded in to avoid scrapes against buildings on either side of the street. Luckily there was a car park not too far along and we could gratefully abandon the campervan and walk around the harbour instead.

Leaving the village we also encountered some narrow and steep country lanes which forced us to drive slowly. Happily the few farmers who did end up waiting for us always returned our thanks with a smile and a friendly wave. Verdict? Mission well and truly accomplished. Countless ice creams consumed and a beautiful county explored. Although by my count, we still have about 290 beaches to see on our next Cornwall break, now I’ve successfully overcome my quirky fear of driving big vehicles.