In many ways, Massachusetts needs no introduction as a holiday destination. It is one of the bright cornerstones of New England; a vibrant place whose capital, Boston, is one of the major cities of the United States; an American dream of leafy beauty whose trees and quiet country lanes burn with famous colour each autumn as the ‘fall’ season takes centre stage. And yet, for all its well-defined appeal, Massachusetts is not always viewed as an obvious escape zone for families. This is an oversight. The seventh-smallest of the 50 US states, it is easily explored – whether the road carries you west into rural areas perfect for days of fresh air and activity, or south and east to a coastline which stretches over 192 miles – notably in the curled finger of the Cape Cod peninsula. Then there is Boston, with its many child-friendly attractions. It may not have the giddy flamboyance of Florida, or the ever-reliable weather of California, but Massachusetts is a splendid option for a break with your brood. 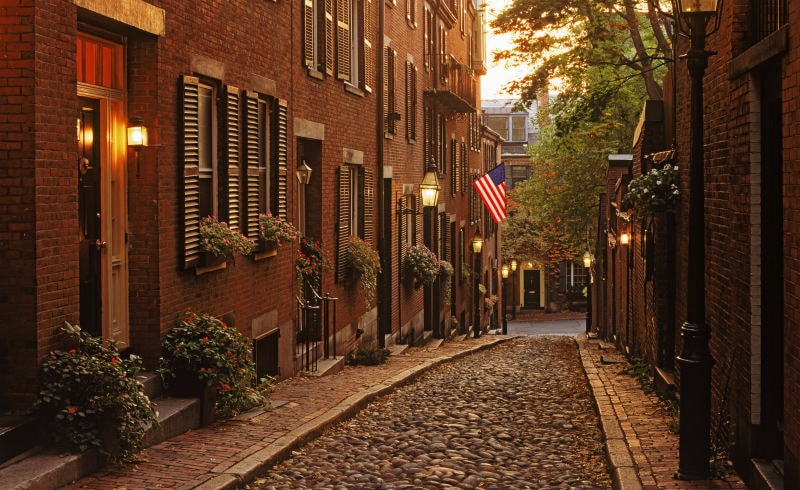 One of the many dainty roads in Massachussets

Visitors to Boston quickly come to realise that the city looks backwards as much as into the future. The Massachusetts capital was one of the key players in the fledgling America’s bid to cut its ties with colonial Britain, and salutes this heritage via its Freedom Trail  – a three-mile walking route which links 16 of the grand buildings, statues and squares that tell the tale of the US’ birth in the 1770s and 1780s. But if this sounds a little dusty for some young travellers, the city is brought up to date by a host of inventive offerings that call to junior minds. Boston Children’s Museum (general admission £10) is a case in point – a dizzy whirl of fun, which proffers everything from art studios and climbing spaces to bubble-blowing contraptions. It is complemented by the New England Aquarium (adults £17.50, 3-11s £11.50), which celebrates marine life in its many forms – with residents as varied as sea turtles, penguins, Atlantic Harbour seals and Bonnethead sharks.

The Legoland Discovery Center (general admission £10) is a timeless toy-box of plastic bricks, which comes equipped with a 4D cinema, a ‘building academy’ where Lego aficionados can construct amazing models, and a racetrack where just-made vehicles can be put to the test. And The Sports Museum (adults £8, 10-18s £4) pays tribute to the sporting folklore of a city where baseball, basketball and American football are religions, via a sweep of memorabilia and exhibits – brilliant for kids with a growing interest in the roar of the crowd, especially if you do not have time to catch the Boston Red Sox, Boston Celtics or New England Patriots in action.

Adventures also await on the edge of the city. Orchard House, tucked 20 miles north-west of the centre in Concord, flies the flag for Louisa May Alcott. The 19th-century author lived in this pretty property when she wrote Little Women. She also set her story of four sisters moving from childhood to adulthood in the house. The much-loved tale still echoes in its rooms.

However, what is perhaps Boston’s most endearing moment is found, rather remarkably, just off the hallowed plaza of Harvard Square, in Cambridge – the planet’s only shop dedicated to Curious George . Here, the inquisitive fictional monkey created by writers Hans and Margret Rey comes to life beyond the illustrated page as DVDs, clothes and endlessly loveable stuffed toys.

Stay: The Lenox Hotel is a chic boutique hideaway in a central location – which offers bicycles for hire. Family-sized rooms for £390. 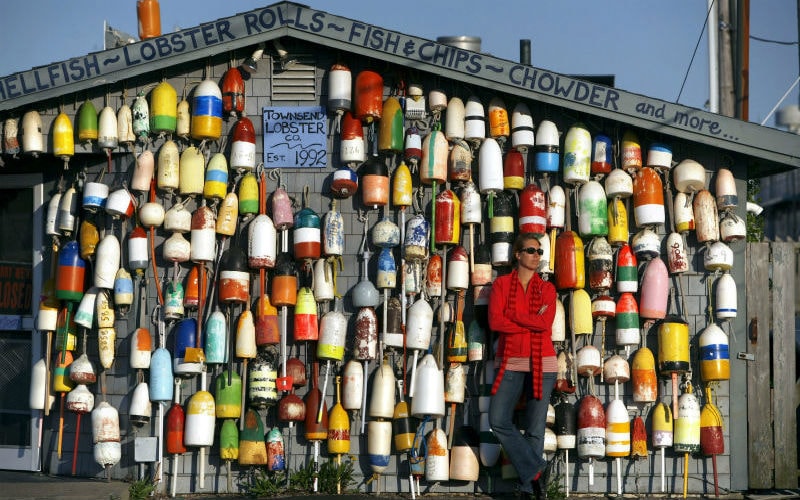 Some 90 miles west of Boston, Springfield is more than a pitstop on a journey across the torso of Massachusetts. Here is a place steeped in family folklore thanks to its links to two children’s authors. In 1904, it was the birthplace of Theodor Geisel, the genius better known as Dr Seuss. A century on, the city remembers the man who forged classics like The Cat In The Hat, Green Eggs And Ham and How The Grinch Stole Christmas via the Dr Seuss National Memorial Sculpture Garden, where his most famous characters – including Horton the Elephant and Thidwick the Big-Hearted Moose – are recreated in bronze. There will be further context next year via The Amazing World of Dr Seuss Museum, which is due to open by summer.

Springfield’s second literary hero waits just north of town in little Amherst – at the Eric Carle Museum of Picture Book Art (adults £5.50, under-19s £4). Here is an institution, set up by the author who devised that cornerstone of children’s books,The Very Hungry Caterpillar, which explores the iconic illustrations that underpinned his tales, as well as the work of other picturebook artists. Of course, there is more to Massachusetts than the turning of the page. And Springfield also deals in high-speed excitement at Six Flags New England (adults £40, children under 54in £34) – a theme park where high-octane rides include mile-long steel rollercoaster Bizarro and the five-loop thrills of Batman: The Dark Knight. Adjacent, the waterpark Six Flags Hurricane Harbor keeps the screams and cheers going during the summer, with an array of slides and chutes.

Head for the hills 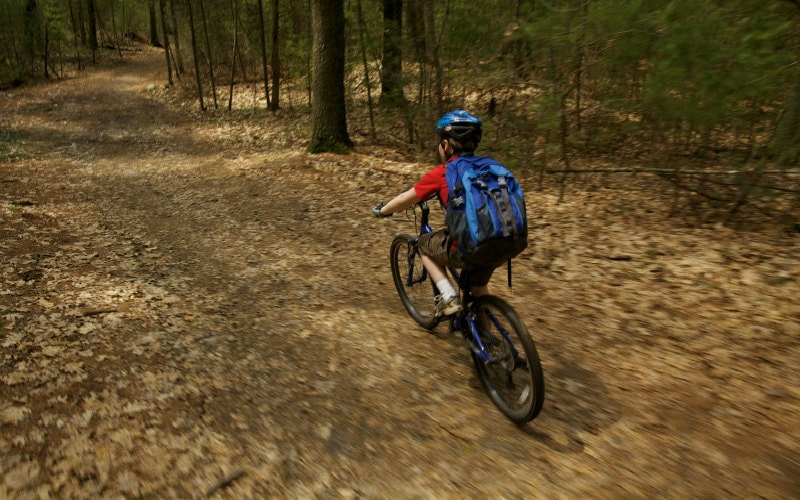 Fanning out in the far west of family traveller.c villages – a magnet for road-trippers when autumn takes over. But the area proves its worth throughout the year as an oasis of activities. One possibility is a day with Deerfield Valley Canopy Tours – an outdoor operator that offers jaunts through the boughs and branches in Charlemont. Three-hour zipline sessions – rushing along 50ft (15m) up in the air – are available to visitors aged 10 and up (general price £59). The same company offers kayaking, climbing and river- rafting trips in this calm part of the state, on the border with Vermont.

Stay: The Berkshires lend themselves to relaxation – and there are plenty of places you can pause to admire the scenery. The Red Lion Inn in Stockbridge is a haven for families. Every room has a DVD player – while a front-desk library of over 100 movies promises salvation on rainy days. The Pool House, meanwhile, offers indoor swimming and ping-pong. Family-sized rooms for £126. 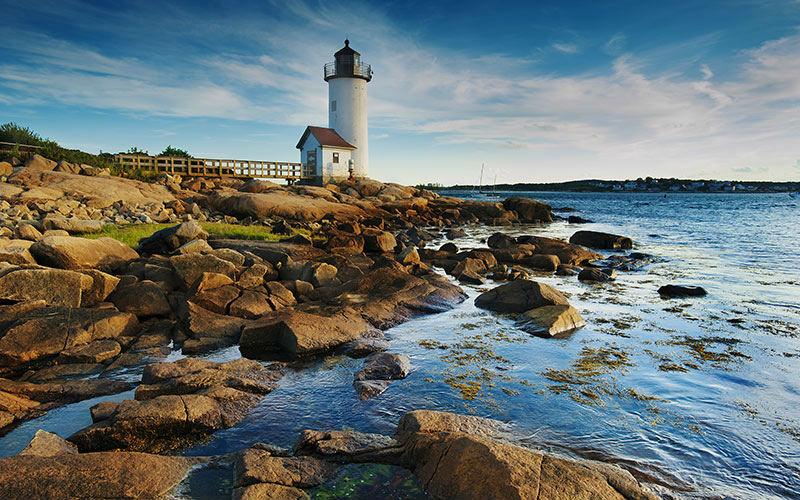 Annisquam lighthouse off the north coast of Massachusetts

One of the joys of Massachusetts is that, thanks to its compact size, you can flit from the interior or the city to the sea in minimal time. Cape Cod is its coastal calling card, unfurling into the Atlantic from the state’s east flank. It is a drive of 115 miles from Boston to the peninsula’s engaging capital Provincetown, at its northern tip – and almost every one of these miles is an opportunity to halt and gaze at the ocean. Cape Cod National Seashore in particular, is a wonderland for children – 68 square miles of protected seafront where historic lighthouses monitor the water and waves crash to land on pristine beaches. Here, too, is a landscape which makes for days in the saddle.

Stay: Pitched at the south-east corner of the peninsula, Chatham Bars Inn has been a Cape Cod hotel favourite since 1914. A four-star spa retreat, it greets families with its nest of swimming pools and tennis courts. There are boats for hire, bicycles for rent and whale- watching cruises to be booked, while its kids’ clubs offer child-specific entertainments. Family-sized rooms start at £231 a night.

The easiest way to reach Massachusetts is to fly to Boston. Three airlines serve Logan International Airport direct from London Heathrow – British Airways, Delta and Virgin Atlantic. Norwegian airlines will launch a new direct flight to the city from London Gatwickin May 2016. Thomas Cook will begin a Manchester-Boston connection in the same month.