25% off luxury family holidays in Abu Dhabi this summer

How often have you been invited to spend summer at a palace? Probably not that often, if ever. But this year you’re definitely in luck, because not only is five-star Emirates Palace in Abu Dhabi inviting you and the kids for summer, it’s also offering 25% off all family holidays right up until the end of September 2019.

Apart from a sizeable discount and the fact that direct UK flights to Abu Dhabi take from under seven hours and are entirely jet lag free, there are quite a few other irresistible reasons to spend at least a little of this summer at Emirates Palace. 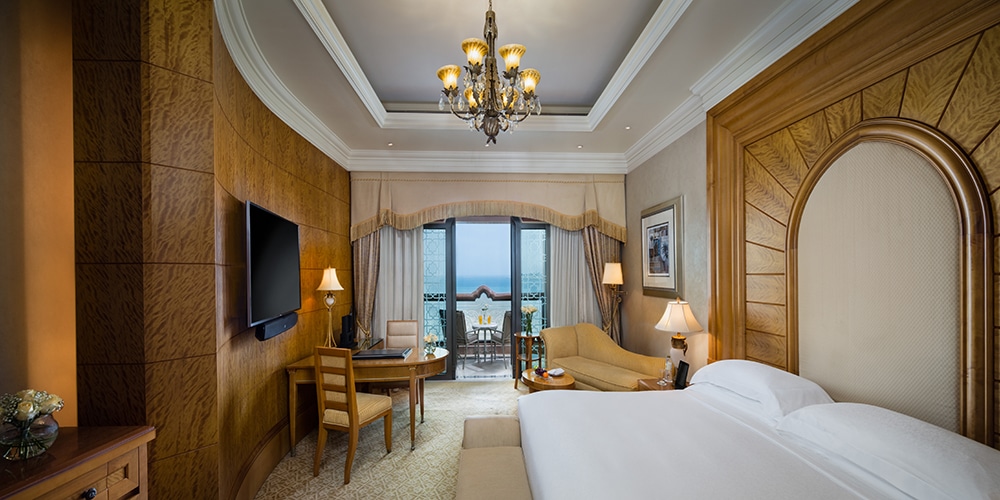 1/4 A hotel so spectacular it gives guided tours

Abu Dhabi isn’t short of remarkable buildings – it’s home to the immense Sheik Zayed Grand Mosque as well as the ethereally lovely new Louvre Museum. So when you hear that Emirates Palace is impressive enough to warrant guided tours, expect extraordinary and you won’t be disappointed.

About 10 minutes west of the city’s elegant Corniche, the hotel has its own private beach and undisturbed views of the ocean, so the setting alone is stunning. But even the Arabian Gulf has a bit of competition from the sheer grandeur of the architecture: think enormous and many domes with endless colonnades and columns all surrounded by lush gardens, palm groves and terraces, peaceful pathways and fields of fountains and water features. And that’s just the outside.

Lavish doesn’t even begin to describe the hotel’s rooms and suites. Restaurants are more like mini-palaces than mere places to eat – even the BBQ Al Qasr is palatial. And you should expect to experience at least a touch of awe-struck wonder at the thought that’s gone into everything, right down to designing bedroom balconies to carefully frame views of Abu Dhabi’s distinctive cityscape. 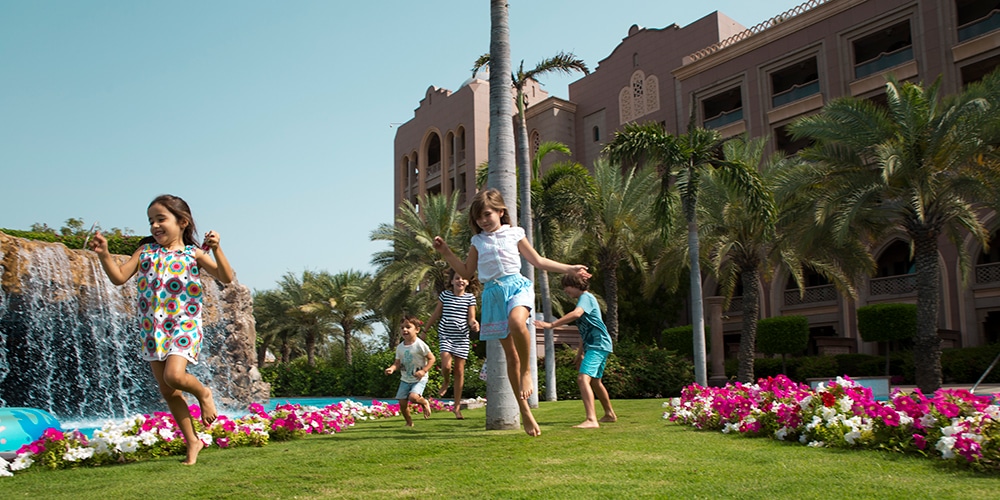 2/4 A great looking hotel that really looks after families

You’ll go a long way before finding a hotel that’s quite as magnificent looking as Emirates Palace. Yet for all the undeniable gorgeousness it’s wonderfully family-friendly at heart and couldn’t do more when it comes to cossetting kids. There’s even a Kids Beauty Salon & Spa for over sevens, and if you’re thinking ‘mummy and me’ facials and massages, you are absolutely on the right track.

Explore the family-friendly care and attention at Emirates Palace 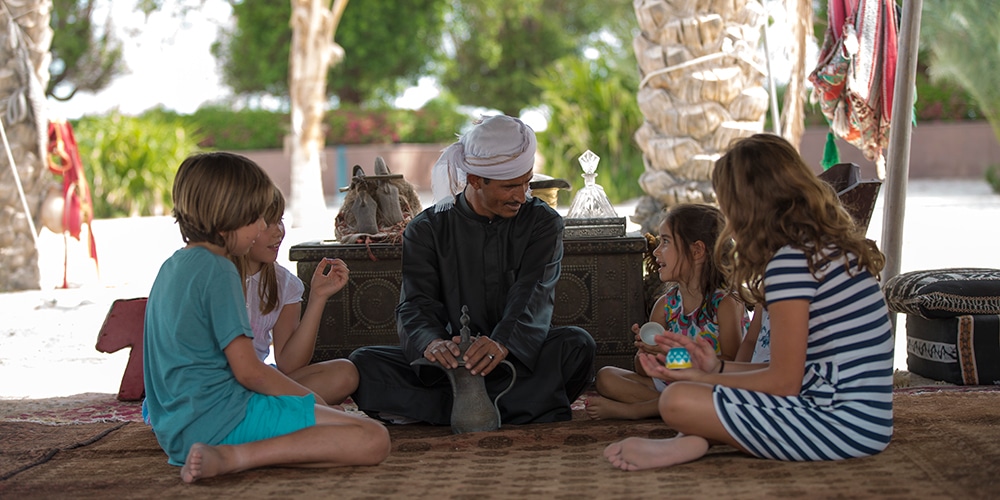 Kids Camp at the Palace kicks off on 7 July and runs right through until 29 August: great news for five to 12 year olds as it’s even more energetic than they are and also has the run of the hotel’s mammoth 1.3km white sand beach.

This year Emirates Palace have teamed up with Abu Dhabi’s much loved family fitness centre, Haddins, so kids can look forward to a seriously long list of exciting activities on land and water – think wakeboarding for starters.

As well as the fun combo of a big, sunny beach and clear blue Arabian Gulf, the hotel grounds are up for adventuring around too. There’s the fabulous family swimming pool complete with long lazy rivers and water chutes and slides. And when young campers want to catch a breath, all sorts of arts and crafts, cookery and kitemaking classes and even a programme of kid-centred cultural events are what counts as downtime at innovative and thoughtfully planned Kids Camp.

Find out more about Kids Camp at the Palace this summer 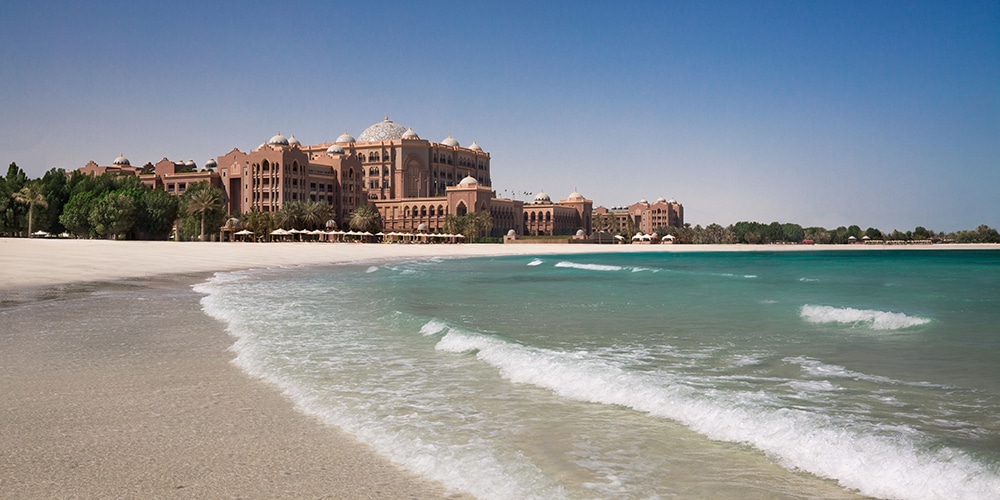 4/4 And then there’s Abu Dhabi, of course

The capital of UAE is the famously laid-back emirate where rich, traditional culture sits harmoniously with some of the best theme parks in the world. Beautiful beaches range from sea turtle havens to the thrill of Corniche Beach. Islands everywhere add another intriguing element into the mix. And there’s more than a fair share of desert too – this is, after all, the emirate which sits at the edge of vast Rub Al Khali.

Emirates Palace is just over 30 minutes from Abu Dhabi International Airport and just a short distance west of Corniche Beach and Downtown Abu Dhabi. There’s almost nothing that the hotel can’t arrange for you from tickets for Yas Waterworld to a tour of the ancient desert city of Al Ain. Understandably the staff are a mine of information about what to see and do in Abu Dhabi, so if you need advice on anything, you only have to ask.

Take a local look at Abu Dhabi with the Emirates Palace

Save 25% on Family Getaways at Emirates Palace this summer

and save 25% on summer room rates.

Coral Room from £217.00 per night, including buffet breakfast,

(based on a family of four sharing).

Etihad Airways flies direct to Abu Dhabi from Manchester and London, year round.

Find out more about family holidays at Emirates Palace. Or book now for summer and save 25% on normal room rates.