Best hidden beaches in Spain to discover with your kids

Finding hidden beaches in Spain isn’t difficult if you know where to look. Here are eight of our secret Spanish beaches we think you’ll like. They’re all surprisingly easy to reach, sunny in spring or summer and come with plenty of space for kids to run wild. 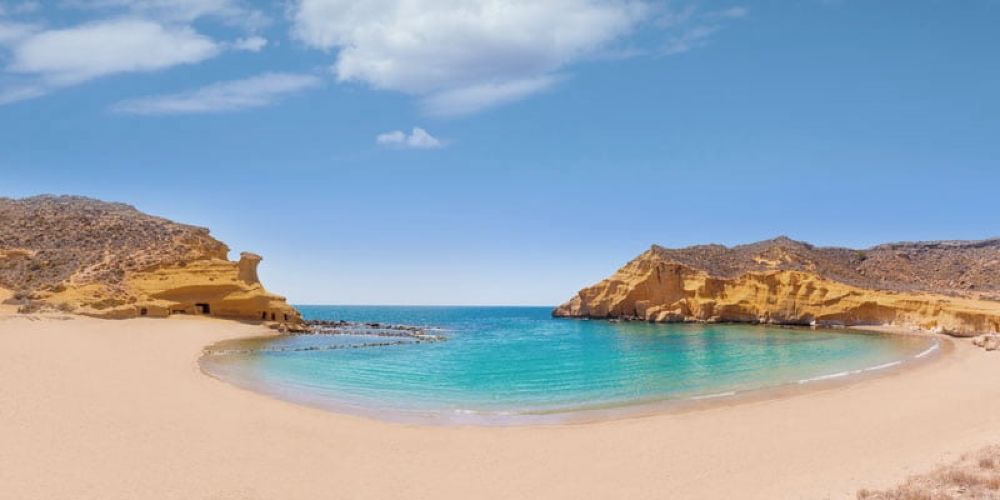 Playa de Los Cocedores is right on the border of Murcia and Almeria. So it’s a beach the regions tussle over. In truth it’s more Murcia. But once you’re down on the sheltered, shimmering sands staring out at the Mediterranean, ownership seems irrelevant.

It’s a little trickier to get to than some Costa Blanca coves, so quieter than it should be considering it’s utterly mesmerising.

The crescent shaped shore is cocooned in otherworldly rock formations. There’s no shortage of nooks and crannies for older kids to clamber around. And the gentle, shallow was is perfect for little paddlers.

Playa de los Cocedores is tucked round Cala Bay about 20 minutes from Águilas in Murcia. 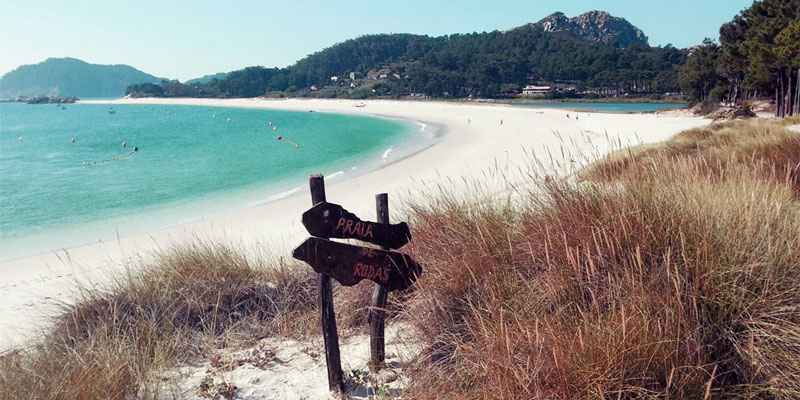 The tiny, Cíes Archipelago on the north west coast of Spain is known locally as the ‘Galician Seychelles’. Hyperbole? Catch a ferry from the port of Vigo to Illa do Faro and make up your own mind.

It’s been called one of the world’s most beautiful beaches and technically, should be busy. But the car-free and protected Cíes Islands only allow a limited number of visitors each day so the people to paradise ratio is pleasantly low.

The Cíes Islands are about 40 minutes by ferry from Vigo on the west coast of Galicia in northern Spain. Cabo de Gata Nature Reserve in Almeria, is the only place in Europe which officially has a hot and dry desert climate. Just don’t expect scorched earth. This 400km² park combines a supernaturally low rainfall with some of the loveliest hidden beaches in Spain.

Getting to most of them involves a hike or a scramble, but nothing too demanding, even for younger kids. And the rewards are well worth any effort. Think crystal clear waters, sands melding from dove grey to bone white and no crowds, ever.

Playa de Mónsul is a little better known than some, so you might have to share the shore with a few other families drawn to its silvery sands, sculpted rocks, and sheer cliffs dropping into the sea.

Playa de Monsul is on the southernmost tip of Cabo de Gata Nature Reserve, about an hour’s drive from the city of Almeria.

The south coast of Menorca is trimmed right round with pretty, white coves. Most of them are tiny and packed with people all summer. But Cala Trebalúger is just far enough away from Mahon and off-the-beaten-track to be almost always peaceful.

The only disturbances you should expect are elegant yachts occasionally gliding into the bay. Apart from that, you’re pretty much on your own.

Wear shoes for the path down to the sands and take a picnic, there’s nothing here at all, which is why it’s on our hidden beaches in Spain list.

On Menorca’s sunny south coast, Trebalúger is just under an hour west of Mahon by car. 5/8  Is Playa de Masca in Tenerife one of the most hidden beaches in Spain?

You can decide for yourself, but we think Playa de Masca in Tenerife is one of Spain’s most secret beaches. Mainly because you can only get there by boat or by hiking down the spectacular Masca Valley from the hilltop village of Masca.

The whole trek takes about three hours and isn’t too demanding for older kids. As a reward, it goes through some of the loveliest scenery in the Canary Islands.

The cool, clear Atlantic is made for soothing tired feet when you finally reach Playa de Masca. And if you don’t want to hike back up, there’s a ferry round the coast and a good chance of spotting dolphins on the sail to Los Gigantes or Costa Adeje.

Masca Village sits at the head of the Masca Valley on the north west coast of the island about 40 minutes drive from Los Cristianos. 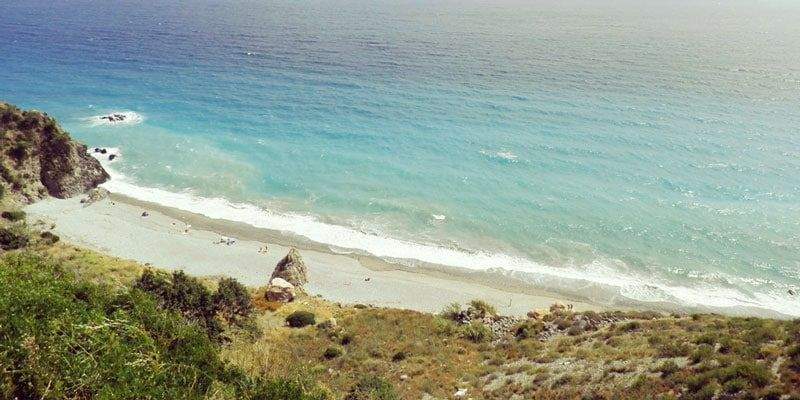 The way to guarantee a beach to yourself on the much loved Costa del Sol is to find one that requires a little bit more effort.

Las Calas del Pino is just 20 minutes from Nerja, but it’s hidden under a cliff face and the path down is just short of a hike. That said, it’s not too much of a challenge – just watch your feet and divide up bags and kids on the descent.

You need to take bottled water and a picnic for this secluded beach. What you get in return is a spotless stretch of silvery sand, clear waters for snorkelling and easy to explore underwater caves.

Las Calas del Pino is a 20 minute drive from Nerja off the old coast road signposted from Maro. 7/8  Playa Bolonia is the hush, hush side of Tarifa, Costa de la Luz

Playa Bolonia on Costa de la Luz is where the Atlantic and Mediterranean converge. Secret beach hunters love this one for its stunning white sand dunes and the Roman ruins of Baelo Claudia. But you still won’t find any crowds.

Quite strong winds tend to keep people on least on slightly more sheltered Tarifa beach  to the east. So Playa Bolonia is great for giving younger kids freedom and letting older ones try kitesurfing, windsurfing or straight up surfing.

In summer you may find a chiringuito on the beach, serving up the fresh, grilled seafood.

Playa Bolonia is 20 minutes drive from Tarifa, the village which looks right across the Strait of Gibralter to Tangier. 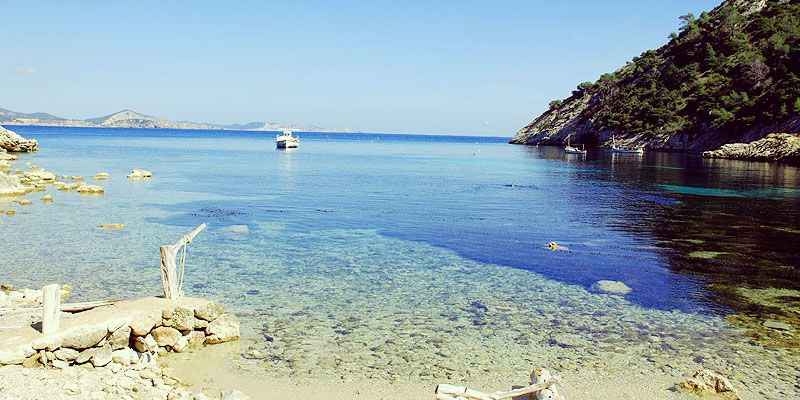 8/8  Cala Llentrisca, the most southerly and secret beach in Ibiza

Cala Llentrisca in Ibiza follows the same rules as all the best hidden beaches in Spain, because it’s almost totally deserted and a little tricky to find. It’s also about about as far south as you can go on the island, without falling into the sea.

You’ll find the fine-grain, pebble-sand beach sheltered by a tall hill and its blue-green water is clear and calm for snorkelling or swimming.

Remember to take everything you need for the day because you won’t find a shop or resort anywhere near Llentrisca. The beach is not on any ferry routes and distant yachts on the horizon are the only signs of life you’ll see.

Lentrisca is about 20 minutes by car from Ibiza Town. Its nearest village is Es Cubells.

Tempted by Spain this Easter? Take a look at our favourite kid-size Spanish cities. And don’t forget to follow Family Traveller on Facebook and Instagram for more travel inspiration.