One of Rome’s most iconic hotels, Hotel Eden, has reopened after an extensive 17-month renovation – Amy Hopkins discovers it was well worth the wait

Imagine waking up in the morning, reaching for the iPad on your bedside table and with a couple of sleepy swipes, turning on the lights, adjusting the thermostat or opening a window, before ordering a bespoke breakfast, to be delivered to your room at whatever time you choose. Welcome to Hotel Eden.

Eden of course means paradise, and for iPad-obsessed kids, being able to control the world around you without getting out of bed is probably as close to paradise as it’s possible to get.

But if you’re worried the kids will be glued to their screens for the duration of your stay, don’t be. The hotel and the glorious city beyond are far too distracting.

In April 2017 the hotel, part of the esteemed Dorchester Collection, re-opened following a massive restoration project. From the carpets to the furniture to the vast reception desk handmade by Italian artisans (see left), every detail has been meticulously designed by French architects Bruno Moinard and Claire Betaille.

First opened in 1889, Hotel Eden is immersed in both its own story and the history of Rome. Its old and gentle soul is celebrated in the new design. The outside of the building, once a pinky colour, is now a golden ochre, mirroring the tones of the city. The hotel is now as grand as the eternal city itself, but with cool modern touches that will have kids Snapchatting their friends with excitement. 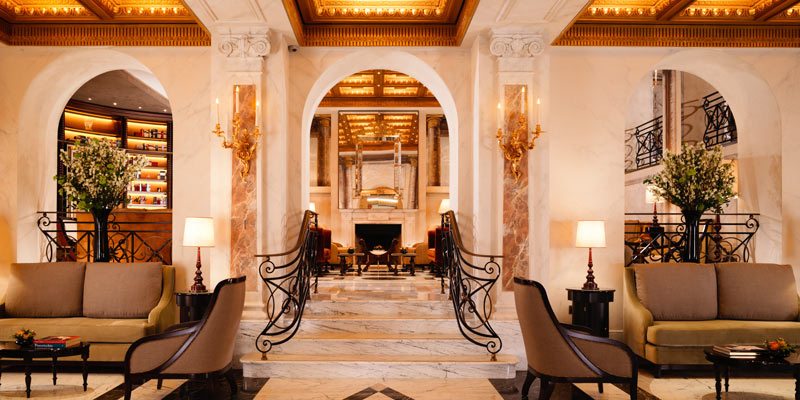 Arriving at Hotel Eden, guests step off the street onto a vast, pale marble floor beneath a golden ceiling – an entrance that would have impressed Emperor Augustus himself. According to General Manager, Luca Virgilio, the hotel’s entrance was designed to wow, and it doesn’t disappoint. At the far end of the lobby is a piano, played nightly from 6pm, and one of the far walls is a floor-to-ceiling bookcase which houses a secret bar.

The 2016 renovations saw the number of rooms reduced from 121 to 98, meaning there’s no such thing as a small room at Hotel Eden. In every room, the mattresses are so vast that a family of four could comfortably share a double bed without disturbing one other but, for more space, adjoining family rooms are available.

The rooms and suites are luxurious and classical, yet homey, with heavy fabrics and elegant artworks on the walls. If you’re not impressed by the cool iPad wizardry, you’ll love the deep and elegant marble bath tub, inspired by the Roman baths themselves. 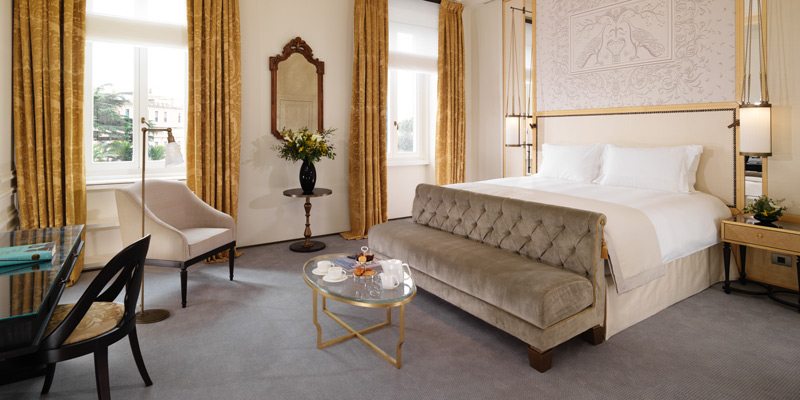 One of Hotel Eden’s elegant suites

Both are on the sixth floor and offer breathtaking wraparound views of Rome. The huge windows open fully (and safely) to allow the city’s soft light and honeysuckle scent to flood in. 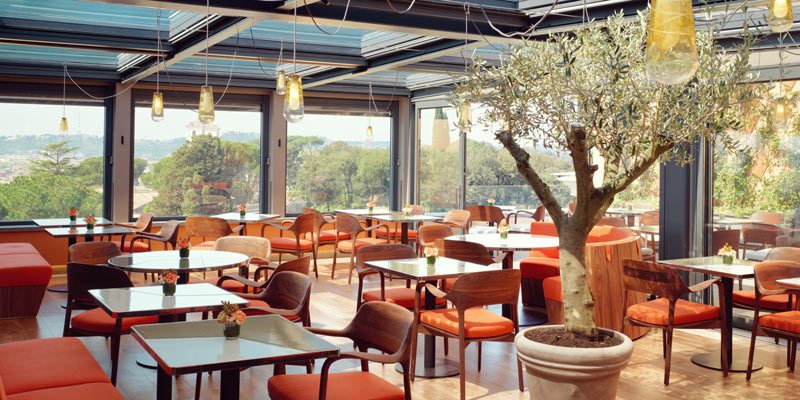 Breathe in the eternal city at Il Giardino

In Il Giardino, where the atmosphere is relaxed, the menu offers sharing platters and a children’s menu. Families gather at its large, communal tables and tuck into Mediterranean favourites –Venetian style tapas, pizza and pasta.

Channeling the nearby Villa Borghese gardens, the terrace at Il Giardino has a gorgeous vertical garden, a glass and metal wall cloaked in fragrant foliage.

It’s often best not to know what goes into making delicious restaurant food (double cream anyone?) but Chef Ciervo has a refreshing emphasis on wellbeing. He goes to unusual lengths to make his dishes as healthy as possible. ‘No one ever needs to go on a diet if they eat the right food’ he explains.

For a treat, book the chef’s table and dine while watching the 30-strong team of intense young chefs work their magic. 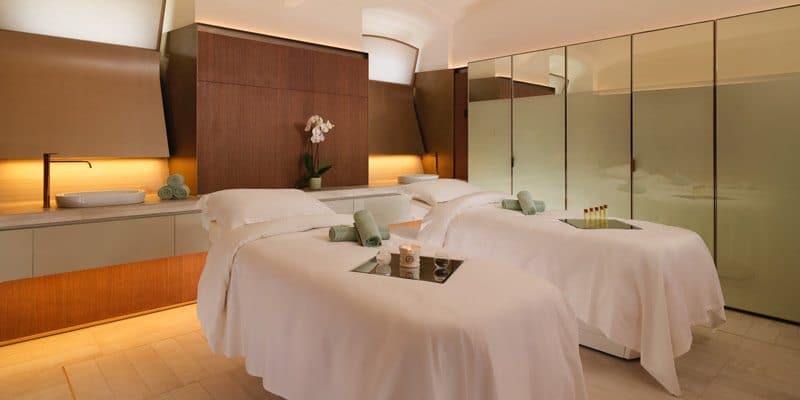 The 2017 reopening revealed Hotel Eden’s new urban spa which, like the hotel’s restaurants, is the creation of designers Patrick Jouin and Sanjit Manku, from Jouin Manku. The spa offers holistic therapies, blow-drys, manicures and pedicures. There are three suites, where therapists use a fusion of treatments by Sonya Dakar (facialist to Hollywood stars) and Officina Profumo – Farmaceutica di Santa Maria Novella, one of the world’s oldest pharmacies.

Hotel Eden rises above Rome’s busy streets, treating guests to breathtaking views of St Peter’s Square and beyond. The hotel is just a short stroll from the famous Spanish Steps and the picturesque Villa Borghese, Rome’s third largest public garden.

Whether your idea of paradise is ordering breakfast by iPad, or tucking into perfect pasta will gazing out over sunlit spires and ancient domes, the restored Hotel Eden is an excellent base for your family’s Roman getaway.

Double superior rooms from £318 a night

Flights from London Stansted to Rome with RyanAir start at £80

Find out more about Hotel Eden and book your stay

What to do nearby

For a fascinating and quirky look at Rome, book a tour with Perfetto Traveler. You’ll be escorted around the city by golf cart, avoiding crowds, heat and blisters, but you’ll feel more immersed in the city than you ever would in a minibus or taxi. As well as travelling on main roads, golf carts can zip along pavements and through back streets, and passengers can hop on and off in an instant.

Whatever your family’s interests, Perfetto’s charismatic tour guides have something special up their sleeves, whether that’s arranging for kids to play football with local children, or allowing families to try fresco painting, in the style of Michelangelo.

Perfetto Traveler is known for its creative, one-of-kind tours, which have been enjoyed by the likes of Taylor Swift. Founder Uri Harash (who’s fluent in six languages by the way) once even recreated the film The Godfather on a tour for a pair of super-fans, complete with blowing up a car.

It takes a lot to match the cuisine on offer at the hotel, but restaurant Pierluigi on the pretty Piazza de’ Ricci comes close. This sublime seafood restaurant is where the Obamas ate while in town, and the excellent service and food certainly live up to Presidential standards.

Discover the 10 best things to do with kids in Rome

When in Rome rent luxury family apartments for less than hotels