Buying a house in Greece: the reality

Buying a home in Greece might seem like terribly romantic, but does the reality live up to the dream? Helen Truszkowski finds out.

At some point, the humdrum of juggling fish fingers and dinging phones had me longing for the laidback holiday spot of my hard-spent youth: Greece.

With some inheritance money to invest, I daydreamed about owning my own corner of Greece, spending lazy summers with the kids, forgoing bikini waxes, sipping ouzo and small-batch preserving my own fig jam. But buying a holiday home is a huge undertaking.

My summer-home search began, well, from home. It turns out you can practically sign your life away direct from your laptop. While I wasn’t considering buying ‘sight unseen’, I quickly gleaned a lot of useful information online. Within a few weeks, I had narrowed it down to three under-the- radar regions spread across the mainland Peloponnese: Messinia, Arcadia and Laconia. Each region, it seemed, was unashamedly, quintessentially Greek. The real deal. 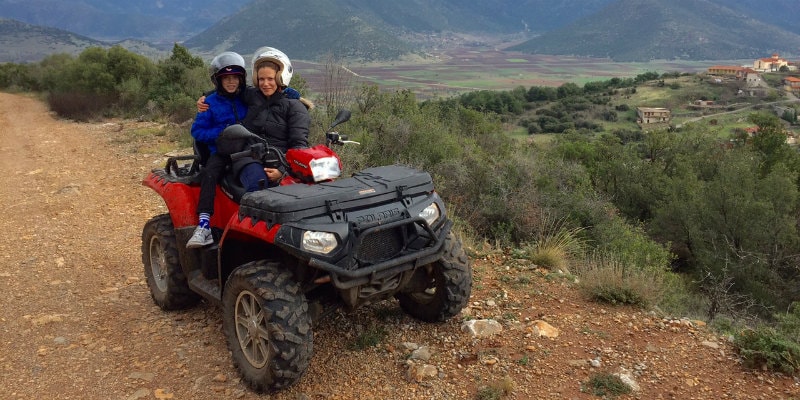 So, one dreary November morning, I took the plunge and flew into Athens with my 10-year-old son, Jack. Ignoring the ’ere-we-go islands altogether, we picked up a hire car, took a sharp left, and headed into Greece’s lesser-trampled interior. Our destination was Kalamata, tenth-largest city in Greece and the capital of Messinia, built at the foot of the Taÿgetos mountain range.

It’s the kind of spot where you can see a modern Greece developing without the distorting influence of tourism. Alongside the old Greece of labyrinthine stores and tavernas stood hip neon fashion stores and buzzy coffee bars. Of course, we weren’t just there to eat and shop. The process of purchasing a property overseas can be extremely complicated, and it’s easy to make a mistake if you don’t have an expert advising you.

I had pinpointed an independent, family-run estate agency to show me around and help me navigate the legalities of the buying process. 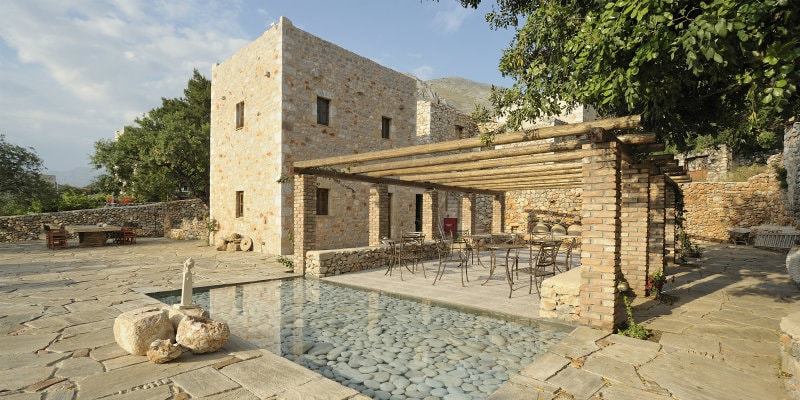 A safe pair of hands

‘Yassas,’ (hello) Chris O’ Connor greeted us with a deep smile, a robust handshake and a glaring British accent. I knew I was in safe hands. Chris spent the rest of the day showing us huge houses with deep verandas and ancient cool stone walls.

As often as not, the owners were wizened old yayas and papous (grandmas and grandpas) whose children had long since flown the nest. With homes now too vast and hollow, they were hoping to downsize and move closer to their offspring. With no words of English, they welcomed us clutching freshly picked pomegranates and walnuts.

That evening, Jack and I dined on our balcony at the Horizon Blu hotel, watching the sunset melt into the ocean like a scoop of orange sorbet. There was no doubt Kalamata ticked a lot of the boxes, but it still lacked the remoteness I hankered for.

So, next morning, we joined Chris and headed south down Mani’s rugged western coastline. The Mani peninsula is the midpoint of the three-pronged southern Peloponnese, a 40-mile-long skeletal finger that – until recently – remained almost inaccessible by land. As we zipped past fields dotted with beehives, olive and walnut trees, Jack stuck out his hand and brushed the undergrowth. The scent of sage and thyme filled the car.

Hugging the road tight, Chris suddenly curved up a steep dirt track. And stopped. ‘Loo break?’ I asked. ‘No, this is where you’re going to build your new home,’ he announced. News to me. The idea of custom fitting my very own home on my very own plot of land hadn’t occurred to me. But there it was. An acre of land for sale, on budget, and with a mesmerising view in every direction.

I was immediately smitten – ready to sign on the line. As my mind started to rejig and I remembered the important things in life (like pensions, school fees, the mortgage, car insurance), Chris pulled rank and suggested we mull it all over at lunch. We landed in the impossibly pretty village of Agios Nikolaos and Chris unfurled plans of the land. No question, I had fallen hard. Convinced this was the spot to beat, we left Chris and continued scouting further south, zigzagging our way past a Peloponnese unchanged since the time of legend.

I enjoyed the best night’s sleep I’ve ever had at Hotel Citta dei Nicliani. At the heart of a gorgeous Ottoman relic, the owners of this discreet seven-room boutique hotel have installed heavy wooden beams, antique furniture and beyond-sumptuous beds. There’s  so much history here. And it has been restored by husband-and-wife team Ilias and Tania so sensitively. Crossing the hotel courtyard to the village of Koita beyond, narrow paths meandered past fuchsia bougainvillea-clad buildings rescued from ruin.

We were on the search for derelict houses for sale, crumbling elegantly with their peeling turquoise shutters, and we chanced upon the fishing village of Limeni just in time for dinner. 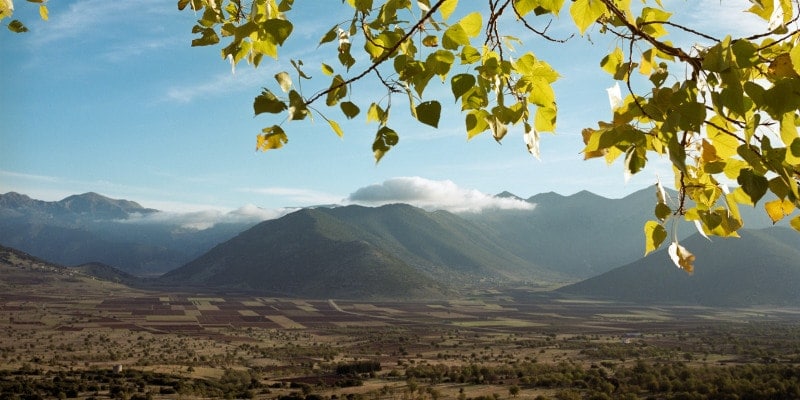 A land of legend

With time running out, and more to explore, we hit the road hard. The E961 sliced north, through the forests of Mainalon and past the now-not-so-far-flung snow-tipped Taÿgetos mountains. En route to Levidi, illustrious place names of myth and legend hurtled by: Sparta, Tripoli, Mystras.  Our stop off for the night was Villa Vager. Since 2011, power couple Nikolaos and his wife Marina have transformed a crumbling stone ruin into an intimate home-from-home hotel.

The atmosphere was intimate and welcoming; the freshly baked breakfast sublime. What’s more, the couple have outstanding knowledge of the local area. Nikolaos is the only operator in Greece (and one of
just a handful in Europe) to specialise in Polaris ATV quad bike tours. He whirred us on a white-knuckle ride through the austere winter landscape and up into Christmassy fir-tree forests.

Next morning, he directed us to Kapsia Cave. Ranked among the 10 most remarkable caves in Greece, Kapsia opened its doors to visitors just a few years ago. Few people have visited yet, or are even aware of its existence. Jack got all googly- eyed, pawing his way past grotesque and formidable subterranean stalactites and stalagmites, fragments of human bones and skulls and later-Hellenic-period lamps. A stroll down from the villa brought us to the hub of the village. Here, a handful of tavernas and cafes fringed a central square, serving traditional Greek country cuisine (roast chicken, pork and wild boar).

We happened upon market, the bustling stalls vying for the attention of locals laden with wicker shopping baskets. Here was a rare glimpse into understated village life in an undisturbed part of Greece, beyond the grasp of impatient modernity. 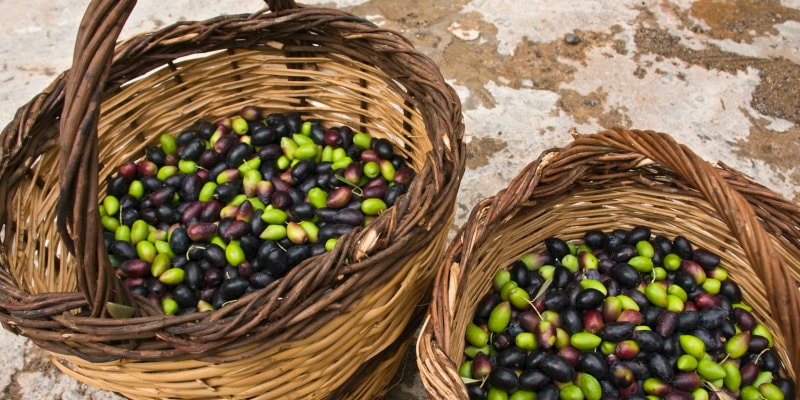 Greek time was catching up with me. That same Greece I remembered and I loved. But did we both love it enough to keep coming back? To put in that call to Chris? To actually take the plunge? Resoundingly, nai (yes).

So lulled were we by this idyllic escape from the manic ‘ping’ of our modern urban lives, here even Greece’s crippling recession seemed a world away. Sure, Greece has had its setbacks, but the best way to help isn’t with cursory charity donations – it’ sto take a trip here and put your cash into the pockets of the people who need it most. So, when people ask, ‘Is it safe? Is there anything we can do?’ Yes, there is: visit Greece. Heck, move to Greece. I know just the spot

Horizon Blu: rooms from £99, including breakfast.

Is buying a home abroad good for you?

Weigh it up. Choosing to either buy and renovate or to build your own home has clear pros and cons. Either involves considerable time, money, imagination, a complex legal framework and incredible patience. Invariably, there is risk involved with both cost and time over-runs. Different building materials and working practices – not to mention the language barrier – can be daunting. But on the plus side, you get precisely the look, style and facilities you want. And a good investment opportunity in terms of either seasonal rentals or long-term lets.

Open a foreign bank account. But be aware: while it’s tempting to use your UK bank to make currency transfers to the bank on your behalf, it pays to shop around. Currency specialists such as fcexchange.com may offer better services and better rates. Right now, exchange rates are in your favour, with the pound up considerably against the euro, so your money should go that much further.

Learn the local language. It will help when you are checking records of the property and land. You should be clear about boundaries, rights of way and access before you even make an offer. Secure a bilingual property law specialist. And be sure to take legal advice on inheritance law. The selling price is not what you’ll end up paying. Hidden additional charges include estate agent fees, notary’s fees, bank transfer fees, surveyor’s fees, taxes, utility connection. Don’t expect rapid progress. Be prepared for considerable bureaucracy and delays. There’s no substitute for hearing about the experiences of those who have already made a move overseas.

Want to find out more about the wonders of Greece? Don’t miss these amazing family-friendly resorts.

Discover the off-season magic of luxury villa holidays in Corfu