Athens is a holiday where learning is organic and history is everywhere you turn. Family Traveller’s Katie Bowman takes a family break to the Greek capital and returns with a budding young classicist. 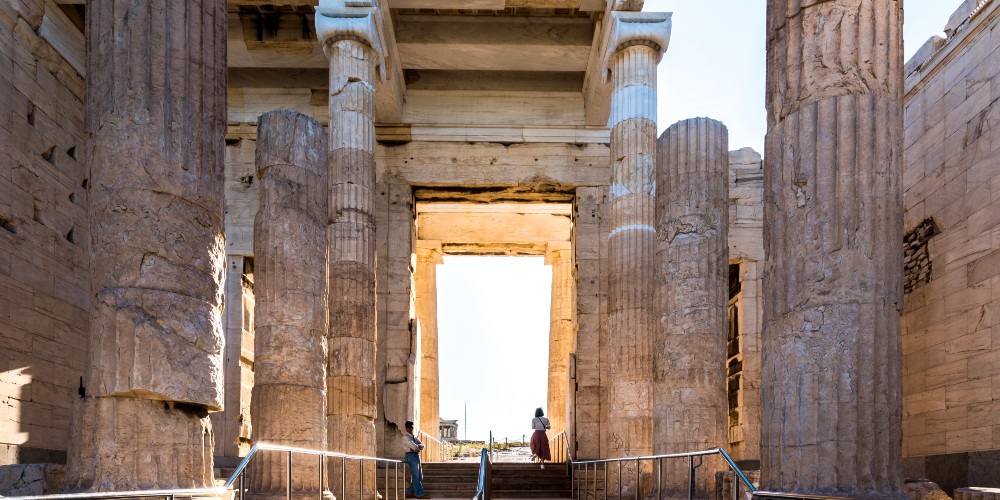 I knew Athens was the right holiday choice when my daughter’s school stories started to include characters named ‘Zeus’ and ‘Athena’ who would ‘fly down from the mountain to wreak their revenge’. She’d actually been listening!

As we trekked around a blustery, busy Acropolis my nine year old daughter had been absorbing it all. She was paying attention when our guide recounted, in minute detail, the stories of the Greek gods and goddesses. And even when our map flew away and we got told off for eating a biscuit as sustenance – no food allowed at the Acropolis – she didn’t lost the thread. Because as far as kids are concerned, when learning happens outside of the classroom, it’s not learning anymore. It’s life. It’s fun. 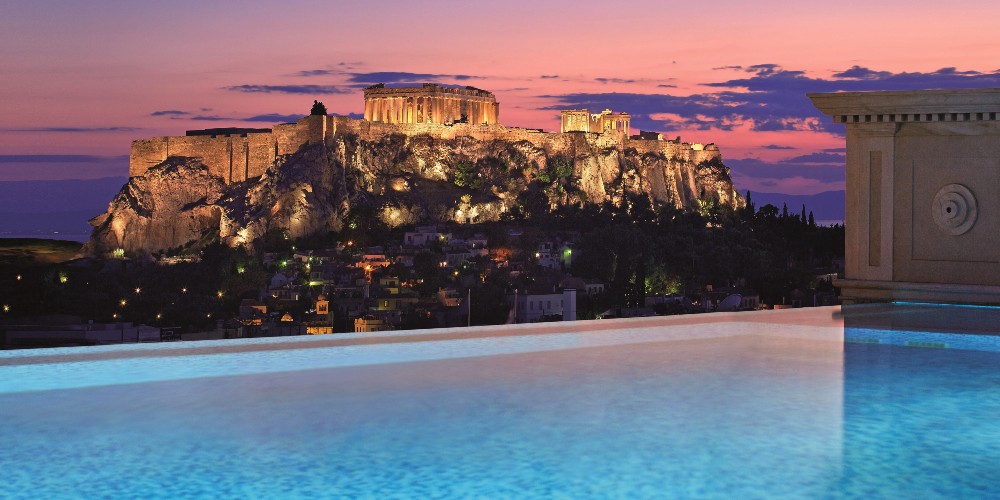 Athens does swimming pool weather, even in autumn

This is what I’d hoped would happen on our half-term trip to Athens. Despite being a travel writer, I try not to ‘teach’ Elisa when we go on our global escapades. I hope she’ll pick things up by osmosis. I hope that she’ll copy me when I try bizarre-looking new food. Or she’ll correct me when I get a foreign word wrong. Or, indeed, she’ll put Greek gods into her make-believe stories. And in Athens, this is really easy.

You need only leave your hotel room to find you’re suddenly faced with the ancient ruins of Hadrian’s Library, constructed more than 2,000 years ago. You might even come across a souvenir shop where kids want to buy wing-tipped sandals and hair bands made with olive branches. So it’s impossible not to pick up a little history when you holiday in the cradle of civilisation.

I also chose Athens because of the wonderful, warm weather. During those in-betweeny school holidays of Easter, May and October half term, you can almost bank on sunshine in Athens. Plus you dodge the coach-party crowds and stifling heat of summer. However, always opt for a hotel with an outdoor pool. We were lucky enough to swim even in the first weekend of November, but check pools are open before booking. Although most hotels open and close their pools for as long as the good weather lasts. 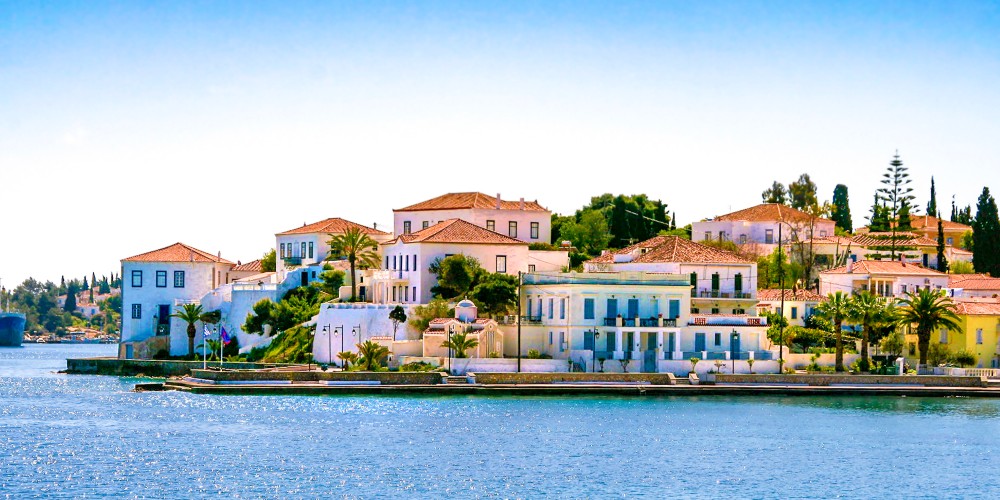 Island hop to Spetses from Athens

If you want to mix your city break with some beach lounging, that’s a cinch too. There are gorgeous, pristine Greek islands less than two hours by ferry from Athens’ port, Piraeus. We decided to go for day trips, it was that simple. One of the closest islands is Hydra, an exclusive speck in the Saronic Gulf where Athenians go for long weekends. This was immediately obvious as we happily walked along the port, watched by couples wearing big sunglasses and elderly ladies drinking coffee with their lapdogs, before we mooched inside boutiques selling Greek-made kaftans, silver jewellery, and stylish beach bags far too beautiful to stuff with sandy swimsuits. At cliffside Spilia Beach Bar you can eat lunch alfresco, then bask on its over-ocean sunbathing platform or jump off the pontoon into the crystalline sea.

Another day, we sailed to Spetses, though you could island-hop from Hydra straight to Spetses, as they’re both on the same ferry route from Athens, and only minutes apart. Where on Hydra there had been no cars, on Spetses we explored by horse and carriage. Even as we relaxed on the comfy carriage cushions, our driver told us about the history of Spetses. John Fowles’ classic novel The Magus was set here and it’s been a location for many movies because it’s such a perfect Greek-island archetype. We were always learning, yet my daughter hadn’t a clue. 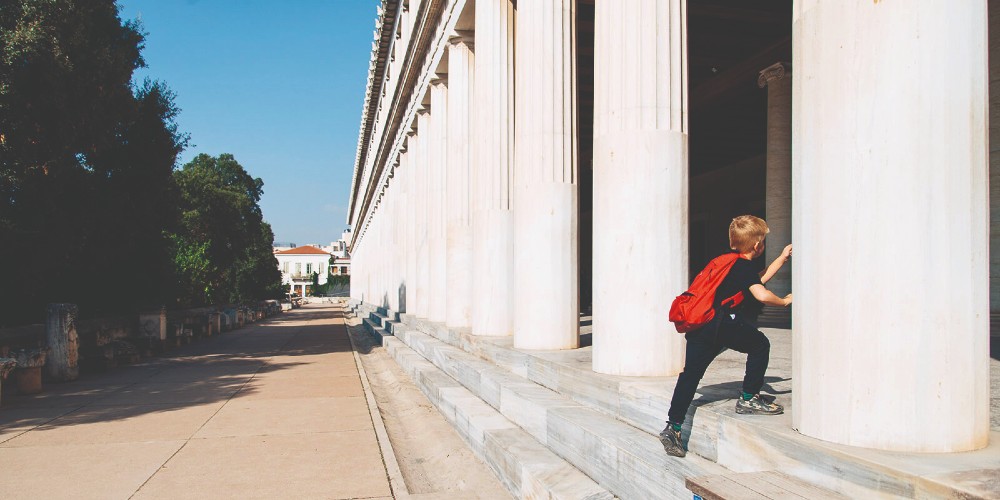 Kid-focused tours of the Greek capital are highly recommended

Back in Athens, I knew we’d had enough ‘time off’ on the islands to justify a historical sight or two, maybe even a museum. This is how we found ourselves at the windy Acropolis. I’d booked a tour with Alternative Athens who offer kid-focused tours of the Greek capital, as well as street art and graffiti workshops, foodie circuits and cooking classes.

Our Acropolis tour was called ‘Young Heroes’. So we learned about the Greek gods and the superpowers they possessed as if they were super heroes. As mentioned, I’d assumed the gale-force winds, hunger pangs and strict Acropolis wardens would mean Elisa barely picked up a word as we wandered around the millennia-old temple. Yet, on return to school in the UK, there she was, reciting ancient myth. It was the stuff of legend… 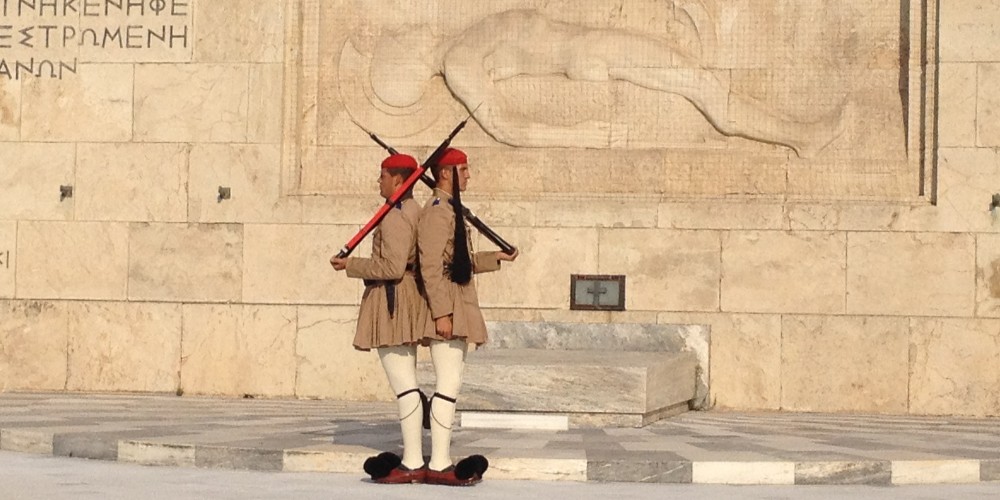 The next day we headed for the Panathenaic Olympic stadium, reached – serendipitously – via the leafy National Garden. This vast public park gave us the chance to run off steam before our culture fix, yet also showcased the Presidential Mansion, which sits at the edge of the park. Usually, visiting a president’s residence would be met with childish yawns and grimaces, but this stately home is guarded by military, dressed in national uniform of pom-pom shoes, balloon shirts, flouncy capes and white tights. Of course, we were respectful in the face of the guards, but we had a giggle as we left them behind, doing their funny kicks and walks. No world-leader’s home will ever be as memorable, in my daughter’s opinion.

For those of you who remember your history curriculum, the Olympic Games actually began in Olympia, thousands of years ago. The Panathenaic Olympic stadium in Athens, on the other hand, is home of the first ever modern Olympics, held in 1896. It’s also the only stadium in the world built entirely of marble and an utterly staggering sight. It was used as a venue during the 2004 Olympic Games and marks the finish of the annual Athens Marathon – yet another Greek invention. With the five-ring Olympic flags flying, and the inspirational marble statues of athletes surrounding us, it was impossible not to appreciate the significance of where we were. 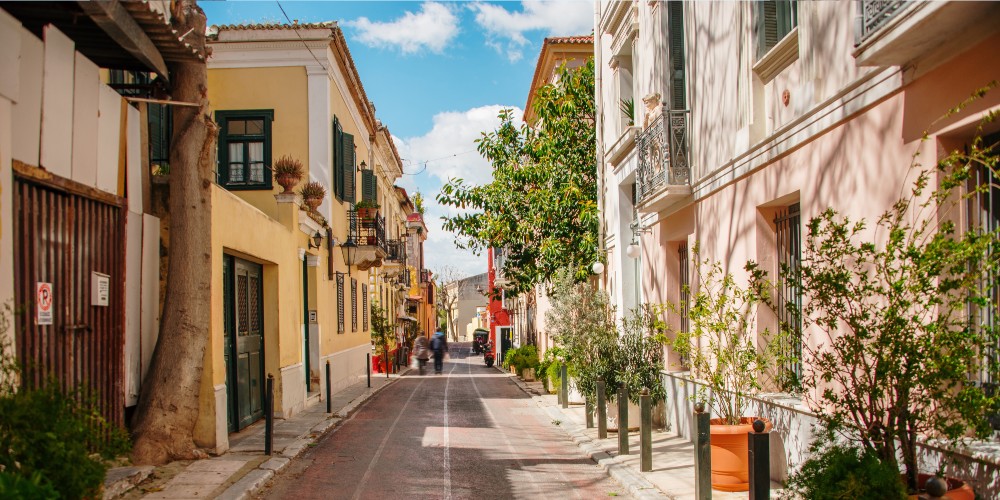 Even shopping and eating turn into stealth learning experiences

Next? Shopping, of course. On a city break, souvenir shopping is a great way to get your kids to understand foreign currency and practise their mental arithmetic – it’s always easier to add numbers when it’s your own pocket money at stake. It’s also the sneakiest of entry points into a traditional street market, or old-town neighbourhood that you want to explore.

We kicked off at Monastiraki, which is a permanent market, with well-organised stalls and a great atmosphere. There was no haggling here, much to relief of my nine year old. Everything we bought had some historical Greek reference. My favourite item was a small statue of Nike, goddess of victory, which was also attractive to under-18s for other reasons. When we needed a break, the rooftop cafes of Monastiraki Square welcomed us with Greek dishes which were already family favourites: feta cheese; spinach pie; chicken souvlaki; honey ice cream. From here, we were perfectly placed to continue our wandering into pretty Plaka, a network of cobbled streets, sunny town squares, small churches and street cafes. 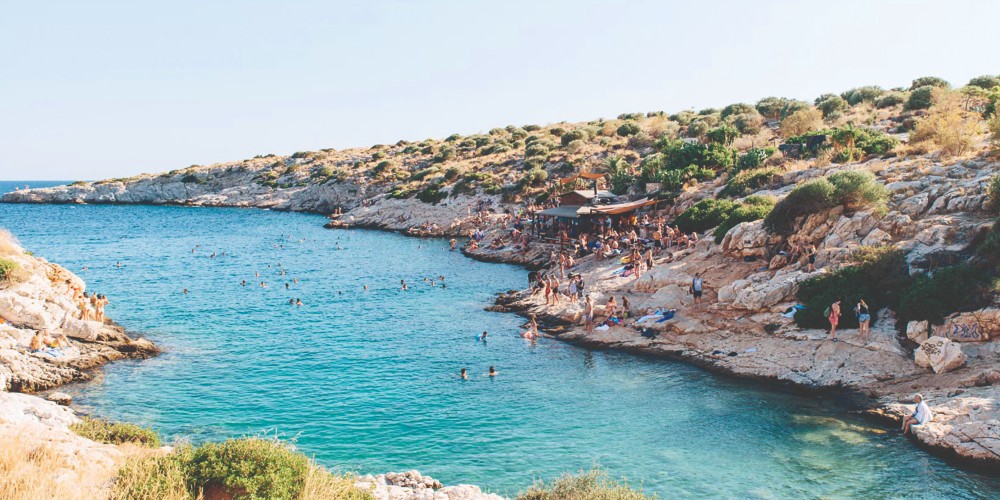 And finally, a special thanks to Mamma Mia!

If you have a love of Greece as deep as ours, borne of watching Mamma Mia! more times than I can count, then it’s easy to keep children engaged. Simply point out similarities to the movie and how accurate – or how silly – the big-screen rendition is. I’m not joking. I’ve always found it massively helpful to read a certain book or watch a film before I travel to a new destination with my daughter. Reading Gerald Durrell’s My Family and Other Animals brought Corfu to life for us. And the CBeebies episode of Go Jetters in Paris meant Elisa knew exactly what the Eiffel Tower was before we even stepped on the Eurostar.

Now, we don’t just play games in the garden back home, we play the ‘Olympics’, with a podium and medals. And we hand out biscuits to the winners. Unlike the Acropolis, snacks are allowed in this classroom.

How to plan your family holiday in Athens

Hotel Grande Bretagne is a fab five-star on Syntagma Square. It’s walking distance from just about everywhere. The rooftop pool is heated and breakfast comes with Acropolis views.
Book your stay at Hotel Grand Bretagne

For an unforgettable – and educational – family meal, book St George Lycabettus. The restaurant sits on iconic Lycabettus Hill and you can go swanky at night with starlit Acropolis views or try a laid-back family Sunday brunch.

Take a look at 10 secret Greek islands your kids will love this summer. Don’t forget to follow Family Traveller on Facebook and Instagram and listen to the Family Traveller Podcast on Apple, Spotify, Amazon or wherever you get your podcasts. 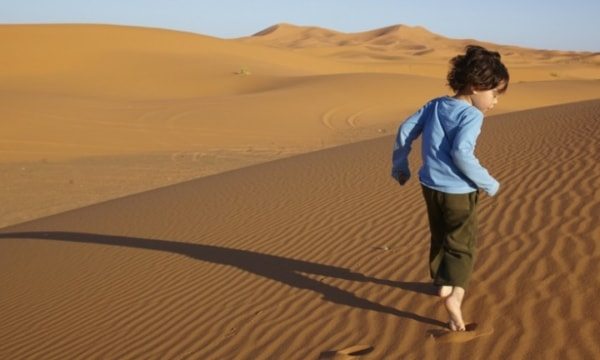