Spain has more Blue Flag beaches than anywhere else in the world. Turkey’s Antalya region has the highest concentration in Europe in a single area. Greece even has blue flag boats and marinas, as well as Europe’s second highest beach count.

So you know a fluttering flag is a mark of quality by the sea, but which seaside out of the many thousands do you choose? Here are 20 of the best of the best to get you started. 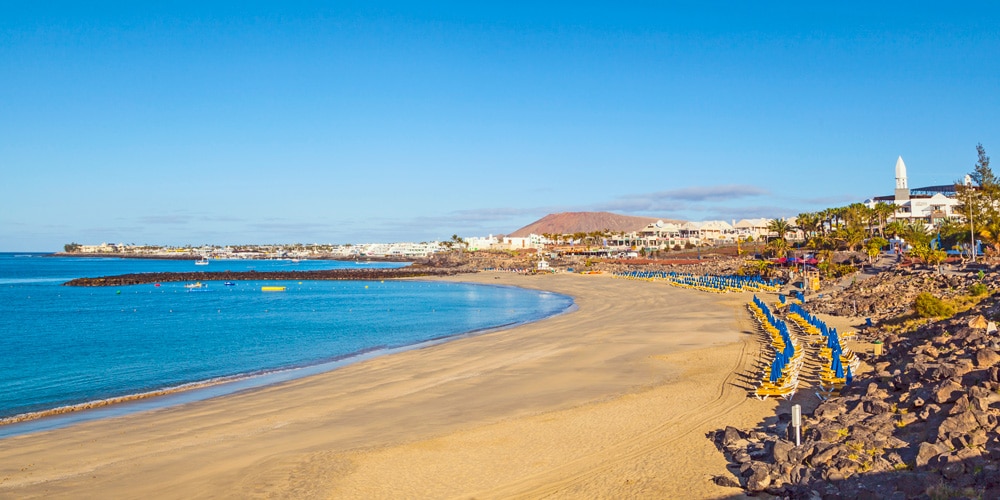 One of six beaches in Lanzarote which proudly fly a Blue Flag, Playa Blanca is so splendid they named the resort after it.

Don’t expect peace and tranquillity though, this broad stretch of glittering sand is an unashamed visitor attraction, and more given to sunbeds and water sports than solitude. Which doesn’t make it any less lovely, just remember to head down early for a pick of prime lounging spots.

Portugal’s Algarve region is a bit of a show-off when it comes to Blue Flags, with 86 beaches, along its 155km coast, more than making the grade.

Dune-trimmed Praia da Galé is just a whisper off the beaten track, so it’s possible to stretch out a bit here, even in high season. But lifeguards are on duty all summer, you can hire sun loungers, the local fish restaurants score top marks and there’s even a cool little beach bar.

Nearby: 20 minutes drive west of Albufeira 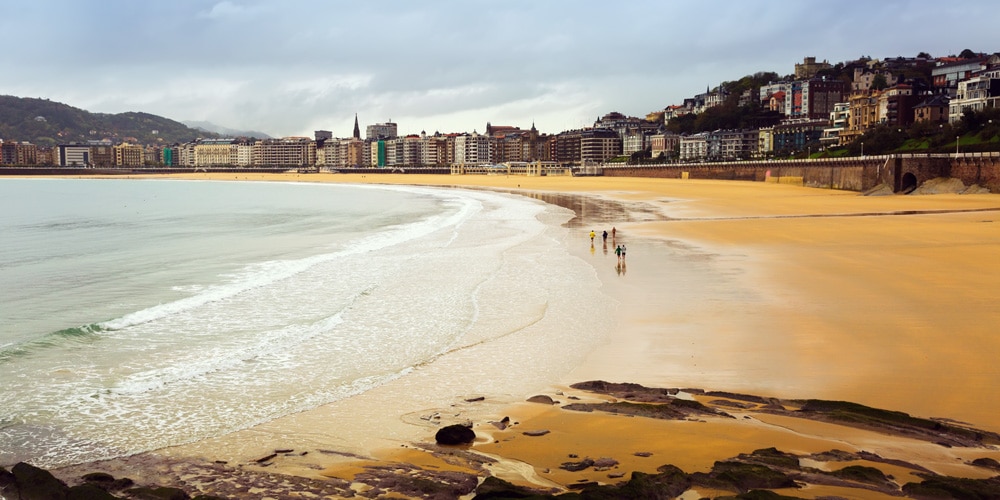 Not only does La Concha fly one of Spain’s many, many Blue Flags, it’s also one of the world’s top 10 urban beaches.

Hard to know what’s lovelier here; the long, sweeping crescent of flawless sand or the backdrop of elegant San Sebastian itself. But take a stroll down to the seafront on a balmy Basque afternoon and you can’t help but agree with the world, La Concha is gorgeous. 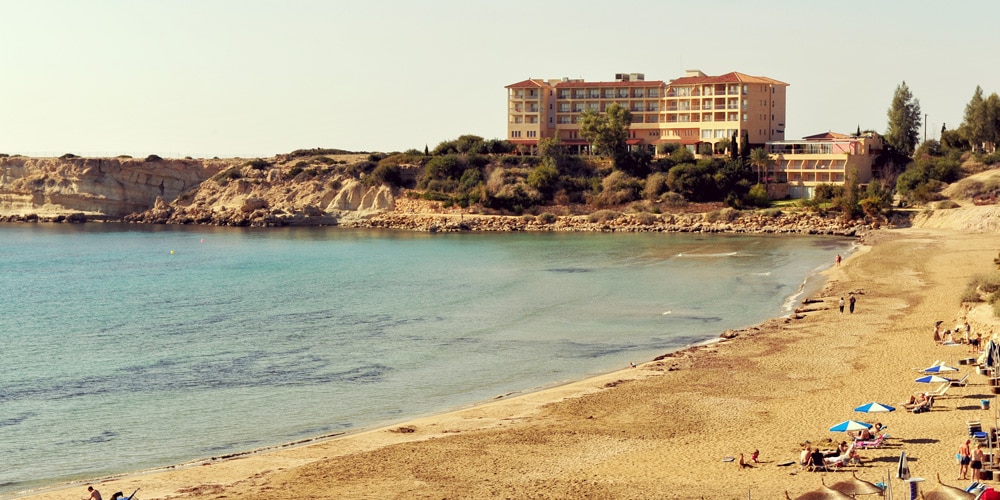 Cyprus is another country blessed with a healthy share of fluttering Blue Flags, 49 at the last count, on a coastline you can drive less than two hours.

Unofficially, Coral Bay is said to be the loveliest beach in the Paphos region, and it’s tricky to argue with 500m of golden sand, sheltering limestone cliffs, water sports, lifeguards in summer and, of course, the big, blue Mediterranean.

Nearby: Next to Coral Bay resort for shops, cafés, restaurants and bars. 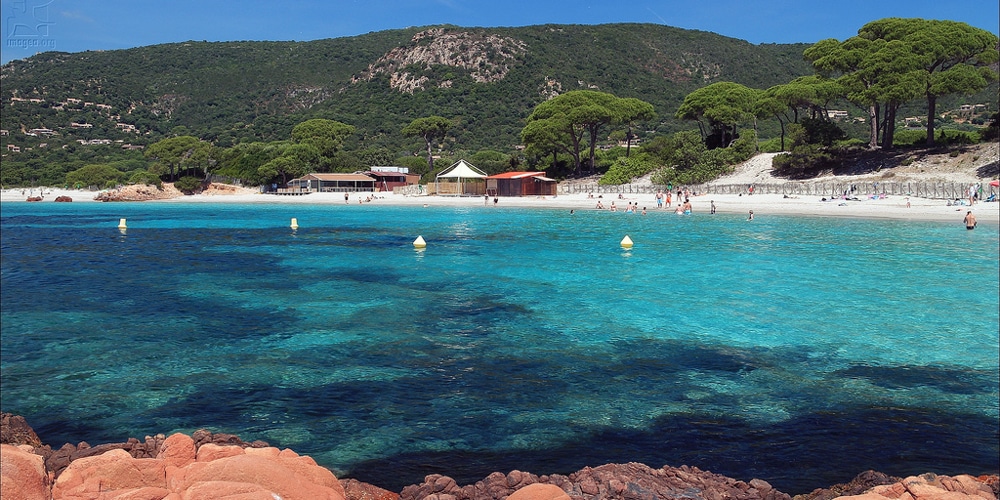 Another of Europe’s Top 10 Most Beautiful Beaches, Polombaggia also waves a Blue Flag and claims the title of loveliest of all Corsica’s beaches, and the competition for that prize is fierce.

Shimmering white sands, views of the Cerbicale Islands, chic beachfront restaurants and cool little bars, all add a hint of the Caribbean here. But, head a little north to the ancient town of Porto-Vecchio, and you couldn’t be anywhere else but the Mediterranean.

Nearby: historic and charming Porto-Vecchio is just 20 minutes drive north. 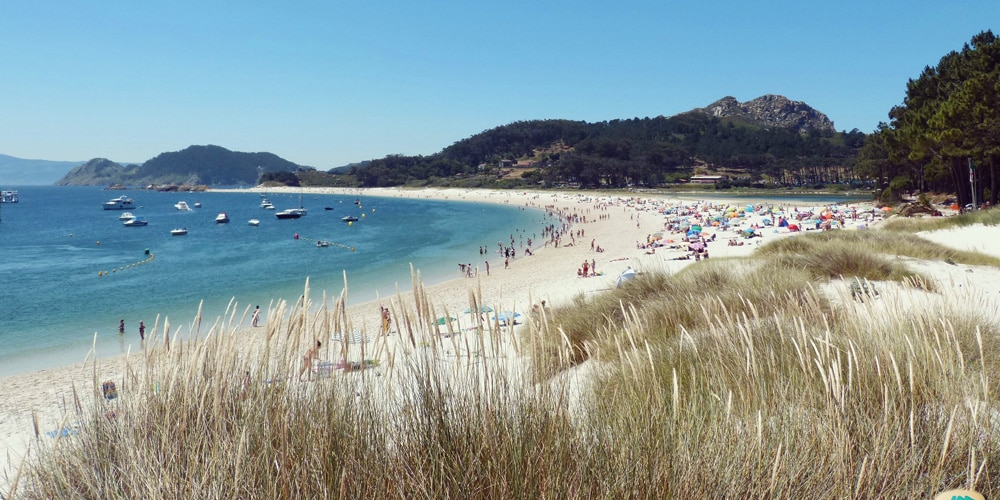 How do you keep your Blue Flag beach beautiful? In the case of heavenly Praia de Rodas, you simply put a limit on the number of daily visitors, and make sure you’re not that easy to reach.

If you’re keen to see Spain’s slice of the Seychelles, it’s on the Cíes Islands, 40 minutes by summer-only ferry from the Galician port of Vigo. And don’t worry, the beach is never gets too crowded and the islands may be small, but there are still several excellent restaurants and easy-going chiringuitos.

Nearby: lively Vigo is 40 minutes away by ferry. 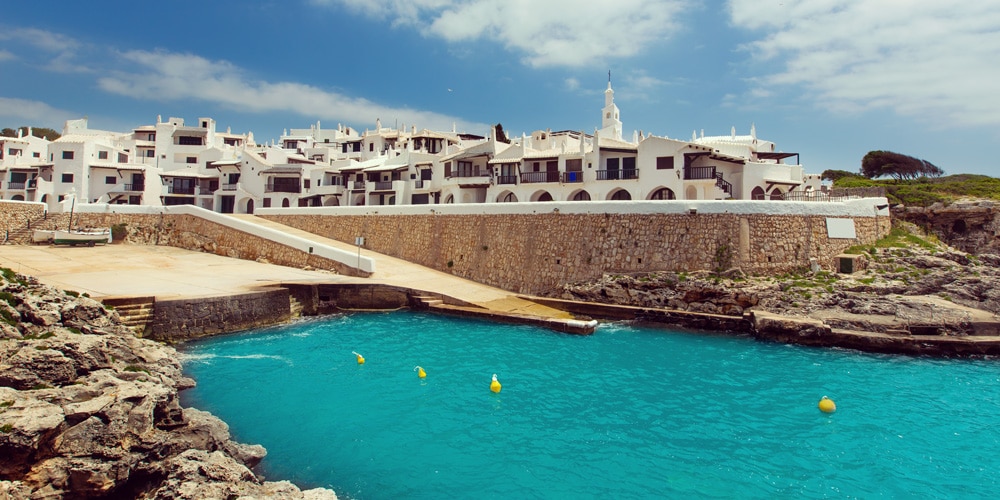 Cala Binibeca on the south east coast of Menorca is pretty, fun, and couldn’t be more kid-friendly, a great Spanish seaside combo which definitely plays a part in snaring the country such a vast haul of Blue Flags.

If you want a traditional family beach right down to cheerful snack bars, boat hire, water sports, sandcastle-perfect sands and safe paddling waters, Binibeca ticks all the boxes. And it also happens to be next to cute Binibeca village, just for added appeal.

Nearby: next to Binibeca resort for shops, cafés, restaurants and bars. 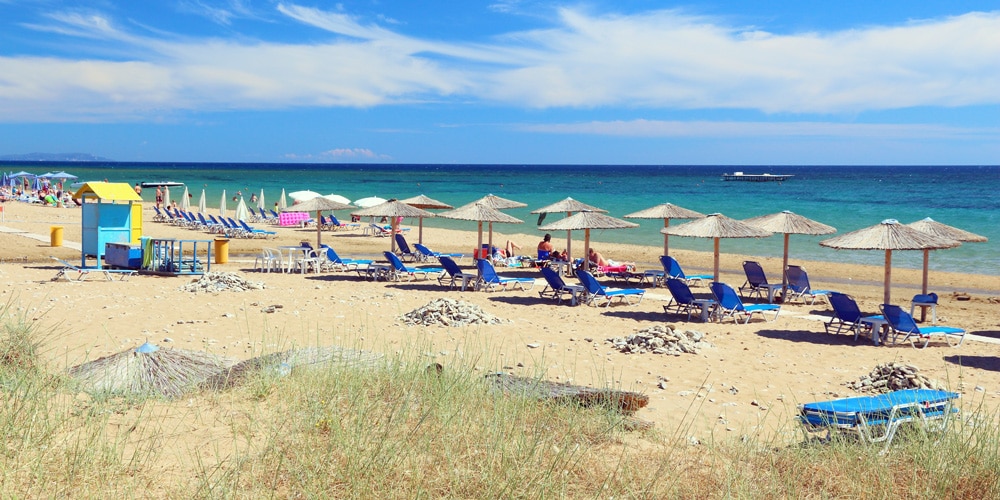 Greece has 486 Blue Flag beaches, and beats almost everywhere else in Europe hands down for secret coves, archaeology by the sea, and sheer abundance of staggering natural phenomena.

Issos Beach on Corfu is a perfect example, not only is it huge, beautiful and dune trimmed, it’s washed by the waters of the Ionian Sea and by Lake Korission. If that’s not exciting enough for kids, you can tempt them with amazing water sports, and some of the best windsurfing on the island. 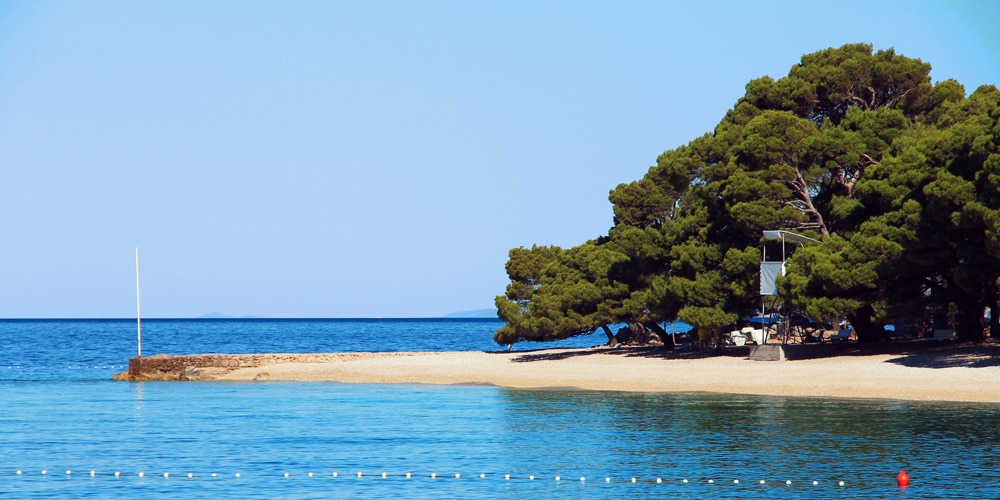 Blue Flag holder and regularly named one of the most beautiful beaches in Europe, Punta Rata is covered in the tiny white pebbles which make Croatia’s Adriatic coastline a gleaming landmark, even from space.

It’s also famous for astonishing sunsets, and an unusually large rock just offshore; a favourite goal for swimmers and a great natural diving board, if you dare. The beach is good for water sports, and a bit of a banana boat legend.

Nearby: the lovely Adriatic resort of Makarska is 20 minutes drive west. 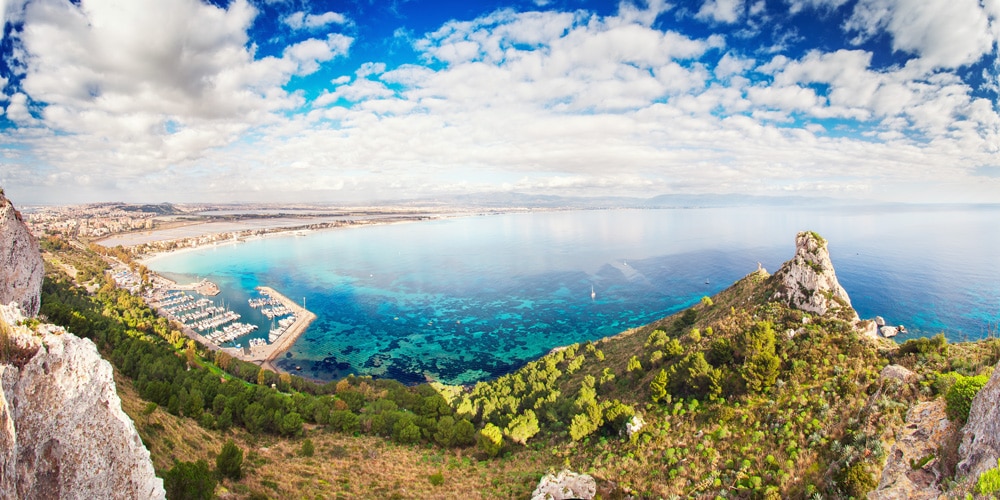 Seven kilometres of soft, white sand alone could have earned Poetto Beach a Blue Flag. But for all its paradise good looks, it’s only 20 minutes drive from the island capital, Cagliari, and one of the top spots for locals to cool down during long, hot Sardinian summers.

The Mediterranean seems to stretch forever at waist depth here, kids love the lively atmosphere and you could spend two weeks solid on the shore and never visit the same beach bar or restaurant twice. 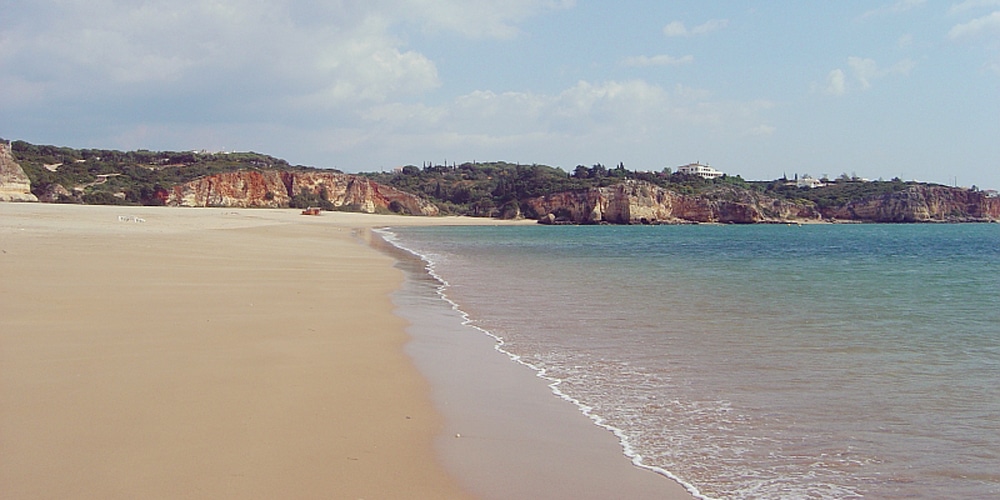 Exactly as the name suggests, Praia Grande is enormous and clearly earned its Blue Flag for being so generous with everything from excellent beachy playgrounds to fish restaurants, laid-back little bars, great value water sports, and possibly the most magnificent Atlantic sunsets in the Algarve.

If you need more distractions, pick the right spot to rent a cloud-soft sun lounger and you can spy on the glossy yachts sailing into Portimão Marina.

Nearby: Portimão is 10 minutes drive north, and the pretty walled city of Lagos is 30 minutes west.

Brač is the most accessible of Croatia’s irresistible Adriatic islands, and even a day sail from Split or Makarska is worth the effort to spend a few hours on mysterious Zlatni Rat.

More like a long spit of sand surrounded by sea, than a traditional beach, this Blue Flag holder changes shape depending on the weather, tides and seasons. But it’s always breathtaking, and even the pebbles have a hint of intrigue: find one with a hole in it and you’ll have luck forever, apparently.

Nearby: Split and Makarska are both one hour and 40 minutes away by ferry. 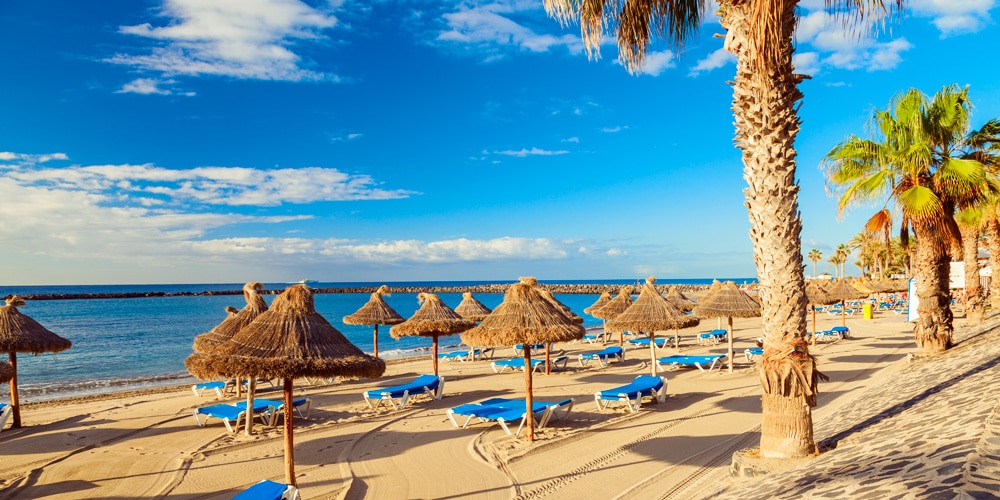 Tenerife has most of the Canary Islands’ Blue Flag beaches, and one of the finest trims along the coast of Los Cristianos. The resort itself is hugely popular, crammed with hotels and the heartland of waterparks and theme parks, but the beach is just perfect.

Even if you choose to stay in one of the island’s more authentic areas, this vast stretch of manicured, golden sand is worth a visit. And it’s packed with everything from beach bars and cafés to every imaginable water sport, so you can arrive early, and stay late to watch the sun set.

Nearby: Los Cristianos town centre is five minutes walk from the beach. 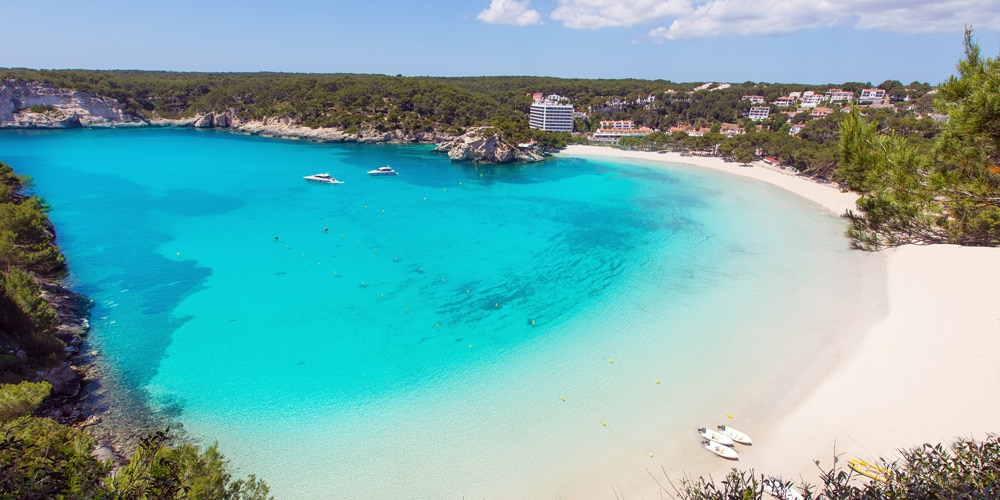 A huge, crescent of pure white sand sweeping round the calmest of bays, is probably why Cala Galdana is regularly named loveliest beach in Menorca.  A backdrop of dense, sweet-smelling pine forest is another plus point for this charming Blue Flag holder.

It’s well-liked families in summer, but seldom feels overcrowded, and if kids are keen to try some famous Menorcan sailing, the calm waters here are perfect, and you can hire canoes or kayaks.

Nearby: Cala Galdana resort is a few minutes walk from the beach. 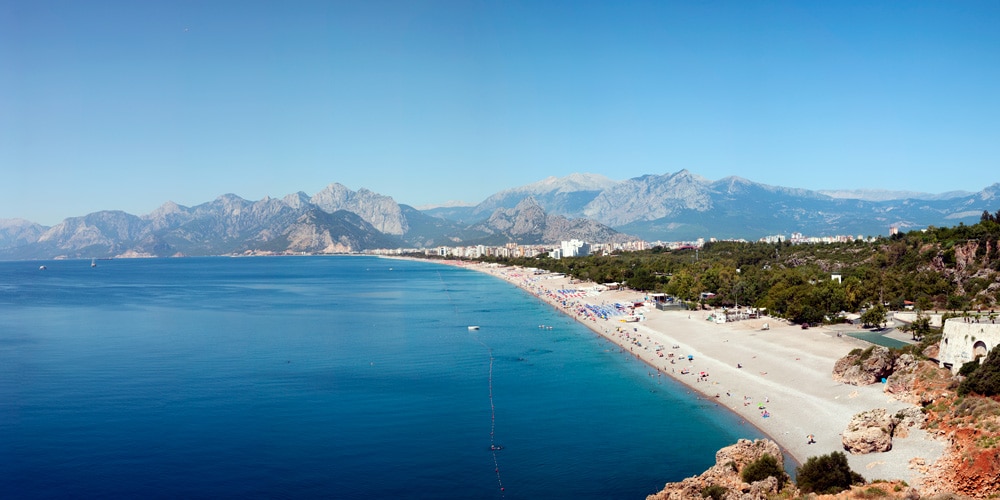 Turkey has 454 Blue Flag beaches along its Aegean and Mediterranean coasts, but magnificent, bone-white Konyaalti in the heart of ancient Antalya is the one to beat.

As far as urban beaches go, this one is truly spectacular. It’s hemmed to the west by the dramatic Bey Mountains, the sea views give a hint of why they call this area the Turquoise Riviera, and absolutely nothing compares to one of the most historic cities in Europe in the background.

Nearby: the historic centre of Antalya is a few minutes walk from the beach. 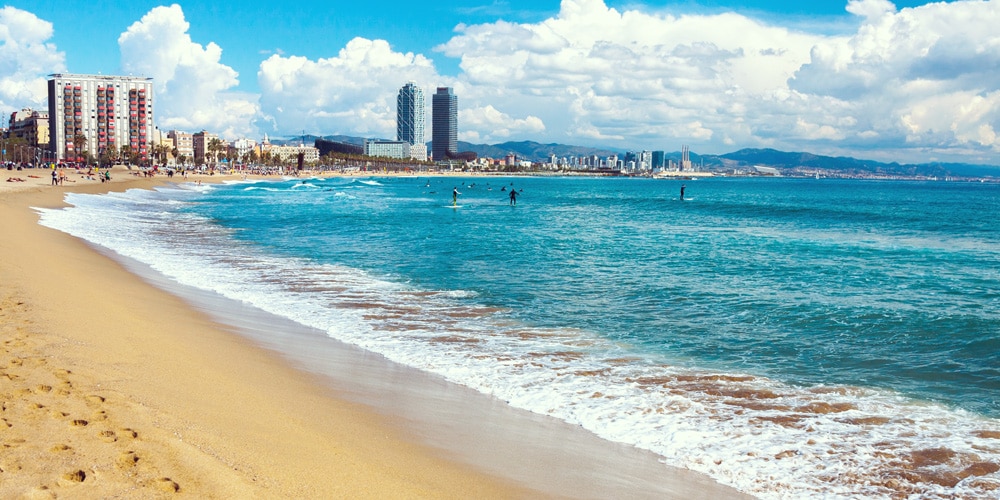 There are urban beaches, and then there’s Barceloneta, the beach that defines Barcelona as one of the greatest Mediterranean cities in Europe.

Almost as well known for its cute chiringuitos and monumental sculptures as it is for acres of shiny sand, this legend by the sea is also in one of the city’s coolest barrio. So if you get bored staring at the blue water and even bluer sky, grab a ride on the Montjuic Cable Car, stroll along the huge boardwalk, or go visit the city’s amazing aquarium.

Nearby: Las Ramblas and Barrio Gotico are easy walking distance from Barceloneta 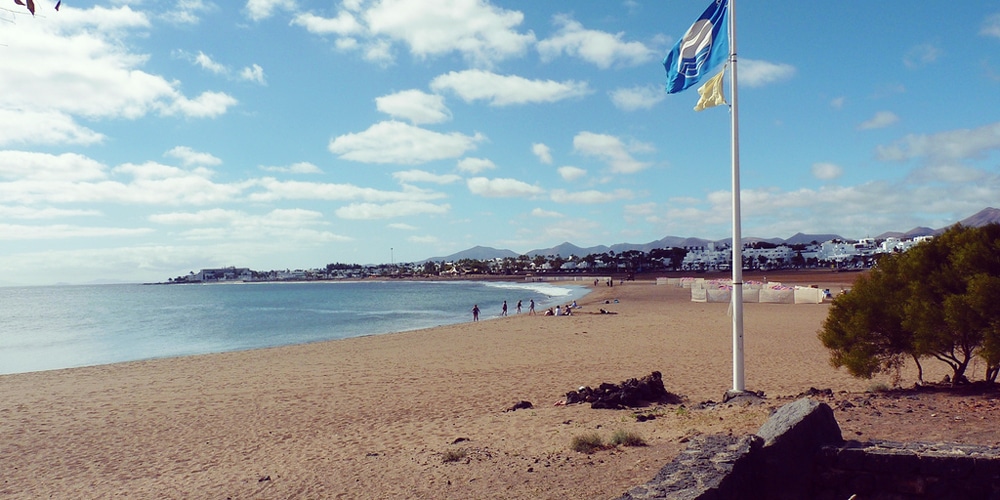 Puerto del Carmen is famous for big, golden sand beaches, but only Playa de los Pocillos flies a Blue Flag and ticks all the perfect family day out boxes from calm swimming waters to fun sports.

Visit in September, to grab some of Lanzarote’s late sunshine, and you can sometimes see the ‘mareas del pino’ submerging the entire beach under a few centimetres of water. These ‘pine tides’ mark autumn’s equinox, give sands a serious clean after summer, and take paddling to a whole new level for kids. 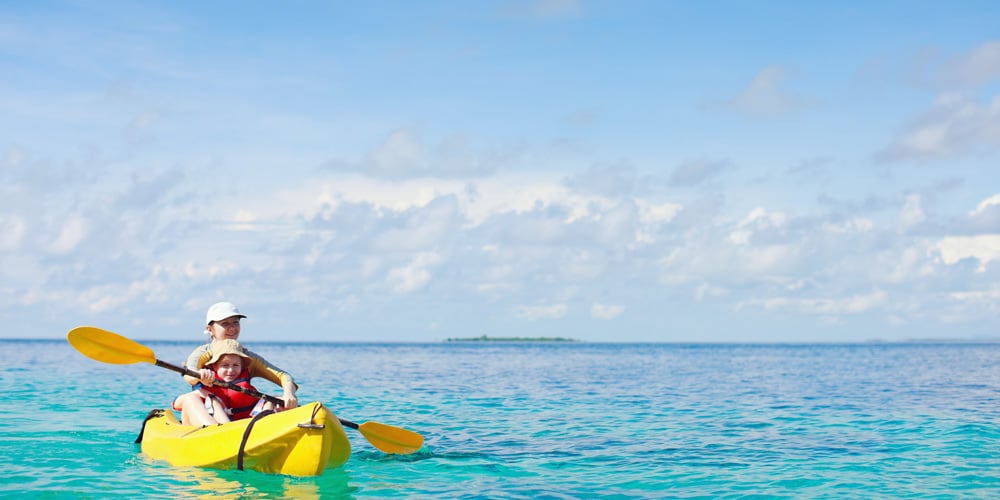 Just 20 minutes from the city of Almeria, Playa de las Salinas takes its name from the local San Rafael salt mines, so along with silvery sands as far as the eye can see, you also get a little bit of history with your Blue Flag here.

Great for all sorts of water sports, the calm waters are perfect for canoeing but there’s just enough of a breeze to make kite-surfing a bit of a thing too. The beach can be busy in summer, although Almeria is still one of Andalusia’s lesser known regions, and busy seldom means crowded.

Nearby: the city of Almeria is 20 minutes drive east of Las Salinas. 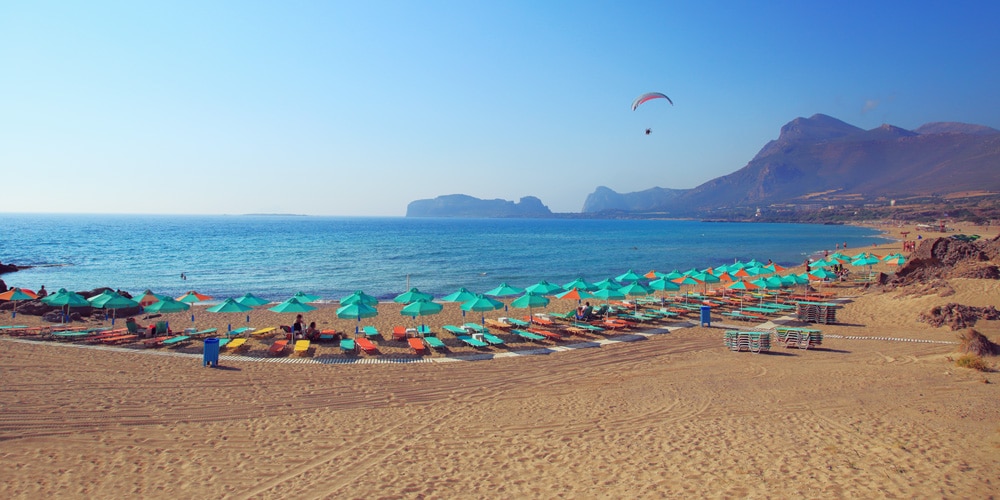 Falassarna on the west coast of Crete is one of the island’s loveliest beaches and in true Cretan style, comes complete with its own set of ancient ruins, some sheltering hills and an historic city within easy driving distance.

Often listed as one of Europe’s top 10 beaches, Falassarna is surprising peaceful, even in high summer. Kids can swim safely in the shallow, horseshoe bay and you should prepare to answer endless questions about the unusual pink sand.

Nearby: the fascinating city of Chania is an hour’s drive east of Falassarna. 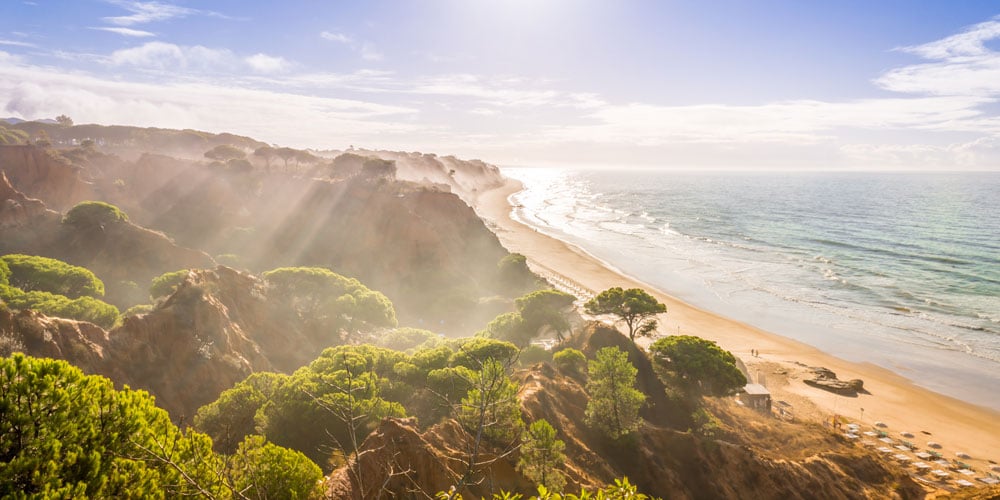 Even on the famously dramatic Algarve coast, few beaches compare to stunning Praia da Falesia with its iconic white and terracotta streaked cliffs.

A combination of endless golden sands and a great location make for massive appeal, but at six kilometres long, Falesia never feels too busy. If you’re looking for fantastic water sports, surf schools and shallow seas, choose the eastern end, closest to Vilamoura.

Nearby: almost exactly halfway between Albufeira and Vilamoura

Have a look at even more beautiful beaches and beachfront villas and book now with Family Traveller.