For a small city, Dubrovnik works hard. That’s always been the way: as the Republic of Ragusa, it was a nation in its own right all the way up to the 19th century, running a vast merchant fleet. Its motto was Libertas – ‘freedom’ – and the people here remain independent, friendlybut reserved in a way that means service comes with dignity and without hassle. They also have style – Dubrovnik is a cosmopolitan and sophisticated city, one that feels like it’s been part of Europe (in the EU sense) for decades rather than months.

Its walled Old City, where everything happens, is full of history, from the ancient Republic to the all-too-recent bombardment by the Yugoslav People’s Army in 1991, but not so much that children will feel like they’re still in school. They’re more likely to know it as the location for Kings Landing in the TV series Game Of Thrones and besides, as the sight of endlessly blue sea reminds you at every turn, this is very much a holiday destination, too. There’s fun for all of you here, and most of it within walking distance (a few hills included). Dubrovnik works hard, but it shouldn’t be hard work for anyone. 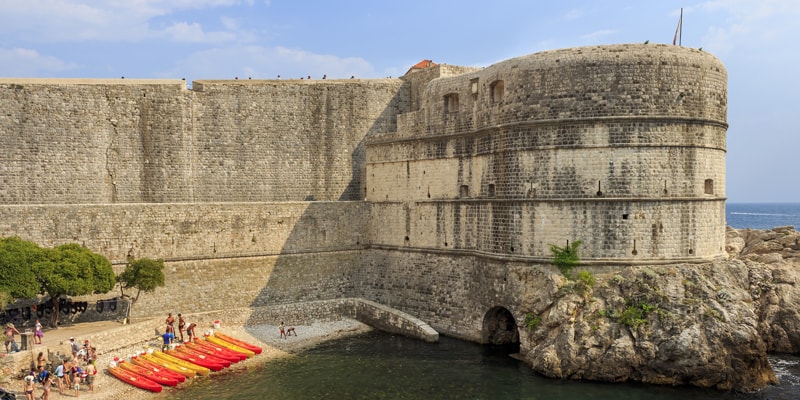 Walk all of the near-two kilometres of the Old City walls, some of them 12th-century, and you’ll have a bird’s-eye view of the narrow streets that stand in as Kings Landing in TV series Game Of Thrones – plus an uninterrupted vista of that impossibly blue sea beyond.

Adventure Dubrovnik runs nine three-hour kayak tours a day, the first at 9am. These take in a snorkelling break, cave exploration and a journey to the dark side of Lokrum Island, as well as drinks and snacks, all the necessary gear and insurance. One or two children can travel with each accompanying adult, no experience is necessary.

The name is pushing itbut this is the best of Dubrovnik’s beaches, with plenty of activity laid on. It’s in Lapad, close to the big hotels, so it stays busy. But the sea is beautifully clear and particularly shallow hereand there are water chutes, inflatables, banana rides and pedalos. If you don’t plan to join in the fun, you’ll find the pebble beach comfortable enough for a few hours or you can head for one of the cafés.

A 15-minute boat ride away (around £7 return from the harbour), this island is a delight of shady benches and hidden clearings. Children will be excited by the ‘Dead Sea’, a seawater inlet with overhanging trees, swing rope and a cave, and the dramatic rocky outcrop that leads to steps into the sea. There’s also a playground, a small pitch with football goals and volleyball net (bring your own balls), and a couple of decent cafés. 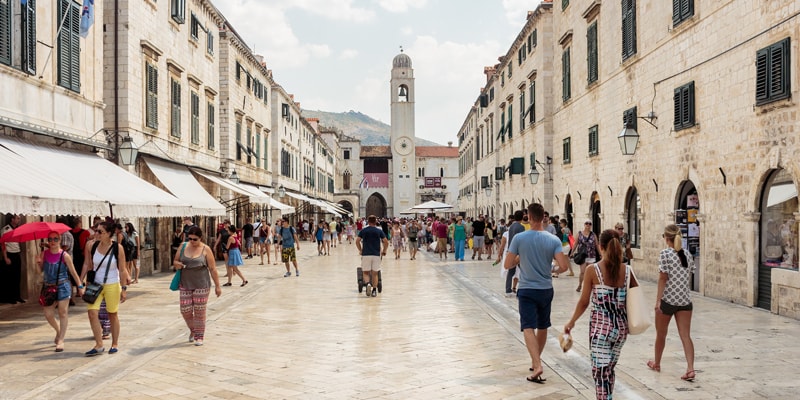 A treasure trove of local produce from traditional producers in the region, all of it prettily packaged without reaching tourist twee. Track down the sour orange marmalade, olive oil with white truffles or almonds you’ve enjoyed and see how the wine tastes at home (go for Plavaç Mali for red, Pošip for white). You’ll leave smelling of lavender and cadlewax.

A little piece of Portland in Croatia, this is the kind of hipster hangout older kids will adore. It’s really just T-shirts and notebooks plus the odd babygro and canvas bag, but the designs cross over between picturebook cartoon foxes and monkeys to teen-friendly lifestyle mottos.

Located on Stradun, the main street of the Old City, this could just make your trip. Most of the stock is in Croatian, of course, but there are several shelves of English-language books. You’ll find a careful selection of history books, some lovely coffee-table tomesand there are also DVDs and games in case the evenings are getting empty. Placa 8,+ 385 20 322 044 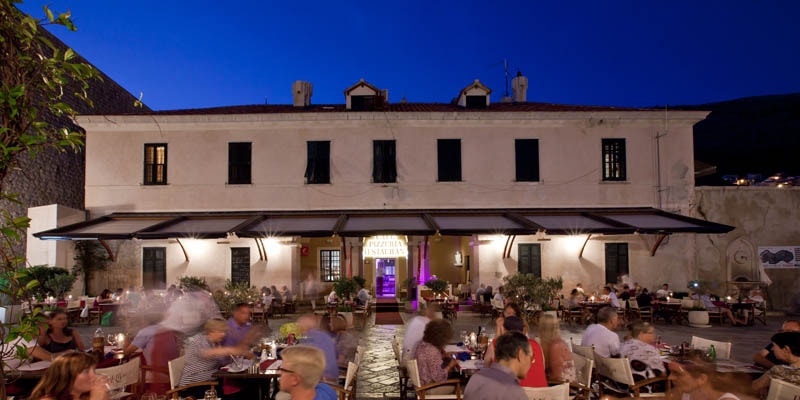 This is the place to go for a taste of modern Croatian cuisine, occupying one end of a quiet square just off the main drag of the Old City. Kopun means capon, and the star dish is a delicious fruit-infused casserole of rooster meat. You’ll also taste truffles, marinated prawns, homemade pasta and more, served with attention but not intrusion. It’s a good spot to linger, so you needn’t miss dessert: if you’ve had enough of local favourite rozata (delicately flavoured crèmecaramel), the chocolate mousse comes highly recommended.

Tucked away behind The Rector’s Palace, centre of power in the old Republic, this former wine cellar is now home to a rather special restaurant. Get a table on the small shaded platform outside if you can, but it’s almost as good indoors surrounded by the old stone. The speciality here is meat, which really means steak – go for Beefsteak Rozario, in a sauce of dried figs, wine and honey – but there’s good seafood, too. Combine the two with the Dalmatian Platter of anchovy, octopus, smoked ham and cheese, or save it for the next day.

This is the only hotel specifically designed for children, which is both good and bad. Kids under 14 will love the coastal location, the large swimming pools (one of them shallow enough for smaller children), the activities run by the enthusiastic Maro Club, the free WiFi and the holiday-camp air. Parents may well tire of the rather bland buffet fare and nightly poolside entertainments, not to mention the functional architecture of pale wood and white plaster. That being said, this really is heaven for active kids, and a heaven where you can leave them with some angels while you head off for some boring old sightseeing.

Sitting prettily just by the entrance to the Old City, this isn’t just a Hilton but the second incarnation of the old Imperial Hotel, built a century ago. Though decorated in shades of brown, orange and yellow, it’s deeply peaceful and offers a taste of Mediterranean elegance you won’t find in the otherwise perfectly serviceable block hotels outside town. You probably wouldn’t feel comfortable dragging a large brood around, but teenagers or a single child will find their needs well met by the indoor pool and the choice of terrace restaurant for dinner, lounge bar for lunch and lobby bar for snacks.

Like so much in Dubrovnik, this waterfront hotel is something old married to something new: an original, century-old section of Superior rooms and apartments, and a wing built in 1986 with modern facilities. The family rooms are in the new, accommodating up to four in two bedrooms connected by an internal door. You can choose between buffet dinner service and à la carte, and there’s a pleasant, if occasionally over-populated, pool. If this doesn’t quite fulfil all your needs, you’ll find the service friendly and professional, and the location – near the beaches, but handy for buses and taxis to the Old City – a good compromise.

How to get there: British Airways flies from London Gatwick to Dubrovnik; from £98 return.

Travel time: A flight to Dubrovnik takes around 2 hours and 40 minutes.

Relish the 'affordable' luxury of a superyacht family holiday in Croatia

Never too big for boots! Best places in Europe for hikes with...

Croatia ahoy! A family sailing holiday from Dubrovnik to Split

Find fast and fun family breaks for May half term 2022