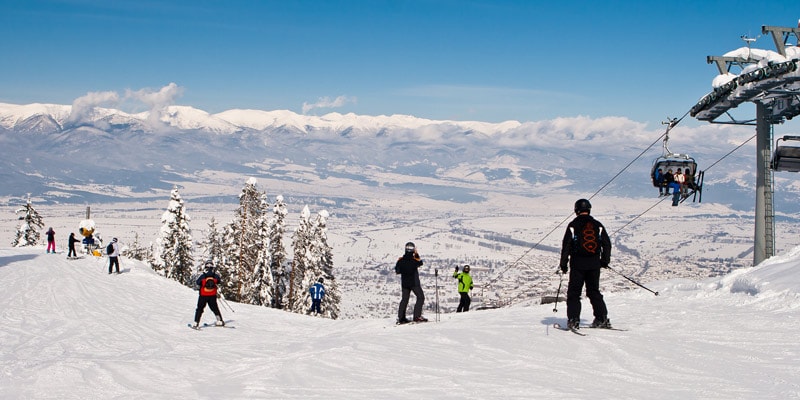 Tucked under the dramatic Pirin Mountain in south west Bulgaria, Bansko’s one of the country’s top ski resort and multi-million euro investment over the past few years means you can safely ignore any reviews pre-2013. There’s now a fast network of 14 lifts, including an eight-person gondola. The 70km ski area has good December to March snow coverage at altitudes of 2100 – 2500m. And, of the 18 total runs, over 50% are intermediate or beginner which, when you factor in fewer skiers, works well for kids. Bansko’s also the only resort in Bulgaria with a Snow Park and boarders have the same inexpensive tuition as skiers at the local school.

Off the slopes, there’s a huge ice rink, over five kilometres of cross country and lively traditional Bulgarian inns and restaurants are a bit of a resort speciality. Several hotels have indoor pools and spa facilities. And the original town is still quaintly historic and charming for downtime exploring.

Direct flights from London to Sofia in December take 3 hours 15 minutes and Sofia is just under two hours’ drive from Bansko. Flight prices from £220 return

Regnum Bansko Aparthotel & Spa, 5 Stars from £153 per night in December

Adeona Ski & Spa Aparthotel, 3 Stars from £52 per night in December

Find out more about family ski holidays in Bansko

Previous Page Next Page
Wilderness Festival: a world of creativity and colourWhere to go in 2017: Up-and-coming destinations in Europe