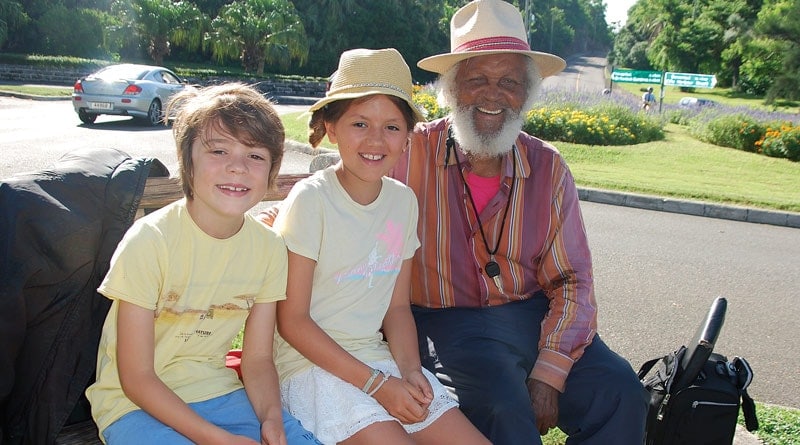 ‘Have you told your momma how much you lurv her today? Have you?’ The words of 92-year-old Johnny Barnes to my eight year-old son Fin, while we shared his bench perched on a grassy verge by the busiest roundabout in Bermuda on Corkscrew Hill (which wasn’t very busy at all, and laden with subtropical blooms). Johnny has been greeting commuters every weekday from 4am to 10am for almost 30 years.

This sums Bermuda up. An ultra-friendly small island with surprises round every pastel-coloured corner. It’s neither Caribbean (though often mistaken for it) nor part of the USA, though many Americans visit, as it’s less than two hours from New York. Stuck out in the Atlantic, it takes seven to get there from the UK. And as an island just 21 miles long and an average of one mile wide, it sits literally on its own on a mighty volcanic shelf, lending it an other-wordly feel.

It’s no surprise to me that Bermuda was the inspiration for the magical isle ‘full of noises, Sounds, and sweet airs…’ in Shakespeare’s The Tempest, the Bard using an account of a 1609 shipwreck on Bermuda and stories emerging from the new colonies. Home to both benign spirits and base creatures in the play, the dual nature of the island is re ected in its history. It was a once a refuge that gave shelter on long sea voyages, yet ships perished on its treacherous reefs, the most northerly in the world. 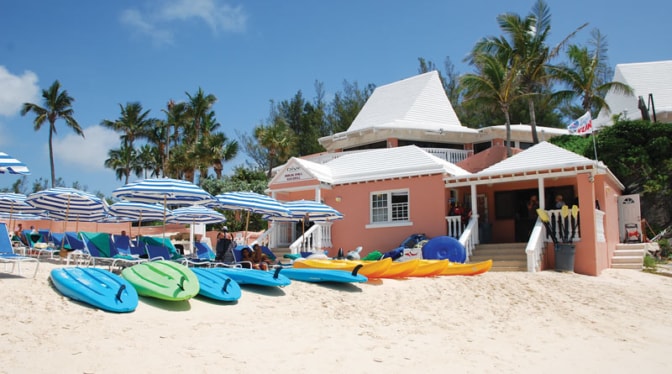 The sandy beach at the Fairmont Southampton hotel

The beautifully preserved town of St George’s brings history alive for me and my 11-year-old daughter, Scarlett, as we leave the boys with the well-to-do at the Rosewood Tucker’s Point resort for a girls’ morning out. We catch the number 1 pink and blue bus from an unbelievably pretty stop by the hotel’s pristine golf course and head into town past the distinct stepped white roofs, every single one designed to collect rainwater. With its small-car policy, easy-to-use public transport, rainwater collection and visible recycling spots, Bermuda is light years ahead of other small islands I’ve visited in terms of eco-awareness.

Salty St George’s at the eastern end of the island is a UNESCO World Heritage Site and surely one of the prettiest former capitals in the West. We wander up Queen Street to an imposing white house with black jalousie shutters, home to the Bermuda Perfumery, established in 1928. Here, we linger over frangipani, jasmine, passion ower, oleander and Easter lily scents, all delicious wafting from clear rectangular bottles or creamy white slabs of soap.

Back out on the cute narrow lanes, we head further into town to the Bermuda National Museum. A 10-minute  lm packs in 400 years of history and reveals how Bermuda became the oldest British colony and locals became master boat builders, creating fast boats that gave them the advantage in trading sugar, salt and lumber. Fortunes were made. It was only after WW1 that the island  ourished as a tourist destination. In the town square we watch with mouths open at the historical re-enactment of wench-dunking, which provokes a discussion of women’s rights between Scarlett and me, and lunch on take-out  sh sandwiches from Art Mels, an island institution for good reason. Next day, we explore the Crystal & Fantasy Caves.

Climbing down the steep wooden steps into the cavernous subterranean world is an eye-opener for Scarlett and Fin. Our young guide Nico, tells us these caves are 10 million years old, and the water in them is fresh on the top, brackish in the middle and salty below. There are some of the most impressive stalactites and stalagmites I’ve ever seen. Once we resurface, we head through the tropical gardens past a mighty banyan tree to Bailey’s Ice Cream Parlour to try the local Dark and Stormy rum and ginger scoops, and rainbow chip with M&M’s for the kids. 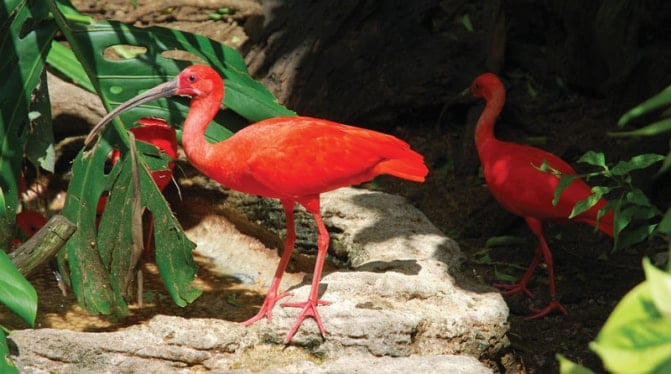 As you would expect from an island so wonderfully cast adrift in the Atlantic, Bermuda is a powerhouse for ocean conservation. A visit to the Bermuda Underwater Exploration Institute (BUEI) is a must for families. Highlights include Jack Lightbourn’s incredible shell collection, and tales of the legendary Teddy Tucker, who explored hundreds of wrecks around the island. And that’s before we mention a lifelike shark-cage experience (kids will come out unscathed!). Jessica Meredith, project manager for exhibits at BUEI takes the time to show us round the new ‘Living With the Ocean’ exhibit, which really engages children in the quest to save the oceans.

Continuing our ocean theme, we head to Bermuda Aquarium, Museum and Zoo, easily spotted thanks to the immense grouper sculpture out front, made of copper from a dismantled cathedral roof. More points for recycling! Here, we meet curator and veterinarian Ian Walker, who takes us round the impressive tanks with seahorses bobbing in the seagrass and octopus going about their day. Ian tells us Bermuda’s reef are in good shape as they are so far north, however they haven’t escaped the invasion of lion sh, which devour everything on the reef.

There is a campaign across the Caribbean encouraging ‘Eat ’Em To Beat ’Em’, yet to gather momentum. We climb to the top of the immense tanks to meet Darth Vader, the aquarium’s 80lb black grouper who likes to be hugged by the divers who clean the tanks! Over in the zoo, we meet the lemurs, Scarlet Ibis and the giant Galapagos tortoises brought to the island in 1933 and still going strong. 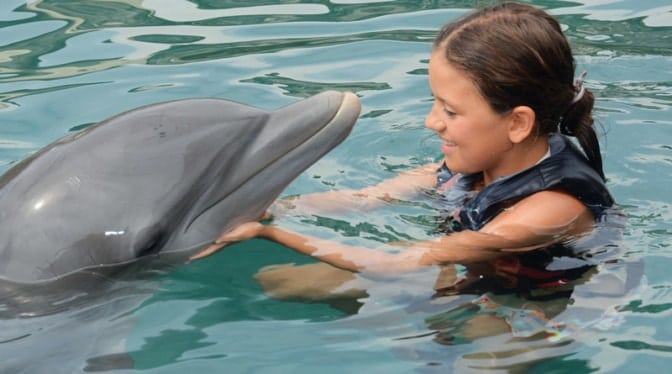 Scarlett gets up close with a dolphin

The following day, there’s a huge treat in store – a catamaran cruise from the dock at Grotto Bay (the island’s only all-inclusive hotel with a trampoline in the sea to entertain kids and a new subterreanean spa with  oating treatment cabanas in the caves). We’re greeted by Captain Nathan Trimingham of Ana Luna Adventures and rst mate Tristram. The kids instantly fall in love with the catamaran and  op out on the netting over the water as we head out around the north-eastern end of the island, past the gorgeous Tobacco Bay beach and the majestic Fort St Catherine, imagining how it would be to an enemy ship approaching the island. We anchor near Alexandra Battery and spy a couple of sea turtles bobbing their heads above the surface.

There’s excitement all round as Tristram leads a snorkelling expedition. It’s Fin’s first time snorkelling over a reef, and he’s in raptures with the sight of angel fish, trumpet fish and a red octopus hiding in the reef. Tristram picks up urchins, baby conch and the once rare West Indian Top Shell. We snorkel over to a beach full of green and brown sea glass, as well as occasional blue ones which the kids covet. Back on board, we’re served a hearty dinner on deck and Tristram has Fin in heaven once more with a spot of  shing on the back.

Fin is keen to carry on snorkelling, and luckily, Bermuda has many beaches with safe and shallow water where kids can snorkel the reef easily – under adult supervision, of course. Another huge highlight of the trip is a visit to Dolphin Quest in the majestic Royal Naval Dockyard. Here, we are kitted out with lifejackets and snorkels and taken into the water with these highly intelligent creatures. I’m not so keen on the dancing and kissing them but it’s
fascinating to be with them, stroke them and feed them.

A great way to get under the skin of an island is to meet the locals. Under a new ‘Live like a Local’ initiative by bermudaexplorer.com, we head to the home of parents Jose and Zakia and their teenage daughter Rihanna, on the shores of Harrington Sound, said to be the caldera of the island with undiscovered depths. We board their well-used fishing boat and head out into the Sound. Jose generously lets Scarlett and Fin take turns steering and teaches all how to line  sh over the side. There’s great excitement when we pull up four yellow snapper between us.

We head back home as the sun is setting, and Jose shows the kids how he cleans the  sh and throws all the debris back into the ocean to keep the cycle of life going. Zakia shows me how to prepare the  sh with paprika and garlic in her bijou kitchen, plus she’s made a creamy macaroni cheese and homemade coleslaw, and we dine in their garden by the water. As we chat, we realise that parents have the same issues the world over – worrying about their kid’s homework and what they will make of their lives. It’s a privilege to spend time with them on this island full of sounds and sweet airs. 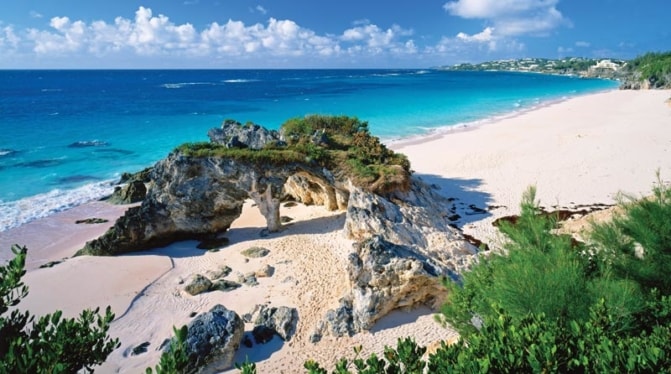 The Rosewood Tucker’s Point screams well-to-do luxury, from the doorman in his Bermuda shorts and pink hat to every deliciously old-school suite, with their heavy brocades and rolltop baths. The beach is a short shuttle ride through rolling green golf fairways, and once reached, there’s a kid’s pool by the seafront restaurant overlooking a pink-sand beach. The kids’ club is in a clapboard house next door to the tennis club back up the hill. Highlights are breakfasts on the verandah of the Point Restaurant, the idyllic pool below and the lavish Sense spa.

Prestige Holidays offer seven nights at Rosewood Tucker’s Point, room only, from £1,542 per person (adult and child price the same) including British Airways fl ights and transfers. prestigeholidays.co.uk Fairmont Southampton is a grand dame of a 1970s hotel, like a majestic pink cruise ship docked on the grass. It has waddling ducks to greet you alongside the bellboys, breathtaking ocean views from the newly refurbed family suites and a handy shuttle to the perfect beach cove, with easy snorkelling, kayaking and paddleboarding for all the family. Don’t miss a treatment in the Willow Stream spa. During school holidays, book a couple’s massage and receive three hours’ complimentary kids’ camp for up to three kids.

Another top tip is to head to the sublime spa pool after 6.30pm with the kids and take in the ocean sunset from a gorgeous alfresco Jacuzzi. Prestige Holidays off ers seven nights at the Fairmont Southampton room only from £1,680 per adult and £1,016 per child (under 12), including British Airways fl ights and transfers. prestigeholidays.co.uk

Hydro-biking from Nine Beaches in Somerset and head out to see the Vixen shipwreck sticking out of the water and feed the fi sh. £15 per hour. facebook.com/hydrobikebermuda