Find the most magical December days out with kids

Looking for magical December days out with kids? Our festive guide has something for every family in the run up to Christmas, from roaming round medieval castles to travelling deep underground in search of Santa. Take a look. 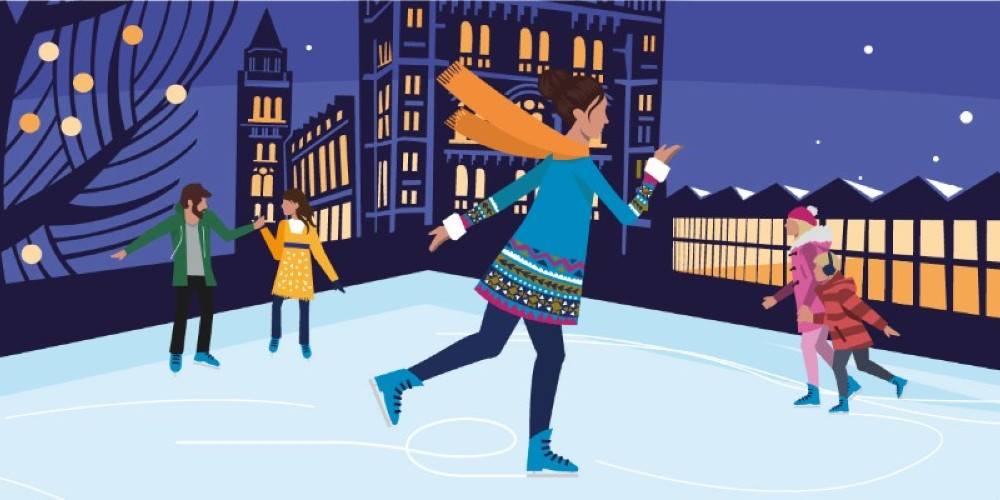 All our December days out respect social distancing and current government rules about mask-wearing. Most events this year also have to be booked in advance, so please check before you go – we’ve given you all the contact details you need.

This is the final year of the Natural History Museum’s famous ice rink. The space is soon to be transformed into an urban garden. But for now, frost-covered trees, magical fairy lights and the dramatic museum building still set the scene for fairy-tale December days. So bring the kids skating and give one of London’s loveliest rinks the send off it deserves.

Where and when: Natural History Museum, London from now until 16 January 2022. 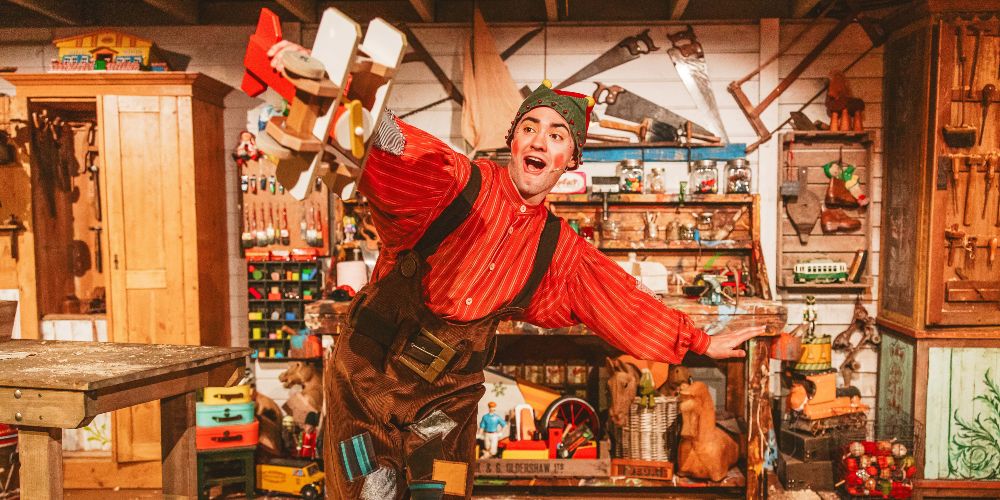 Lapland UK: an out of this world adventure this Christmas

The sheer drama and production that goes into Lapland UK shoots it straight to the top of our family December days out list. Where else can you decorate gingerbread with ‘Mother Christmas’? Build toys with elves? Skate on a frozen pond? Meet Santa? And see real huskies and reindeer?

Where and when: Lapland UK, Ascot from now until 3 January 2022. 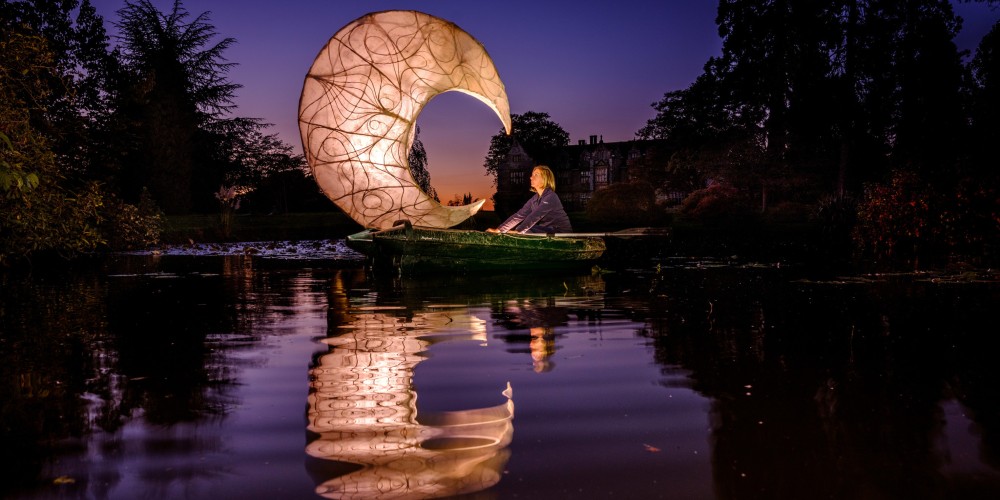 Wakehurst botanical garden is hiding one of the UK’s most enchanting family days out in December. It’s a mile-long lantern trail which leads to a garden illuminated by glow-worms and a record-breaking Christmas tree decked out in 1,800 lights!

Where and when: Wakehurst, Haywards Heath from now until 2 January 2022.

Discover the enchanting secrets of Glow Wild at Wakehurst this winter 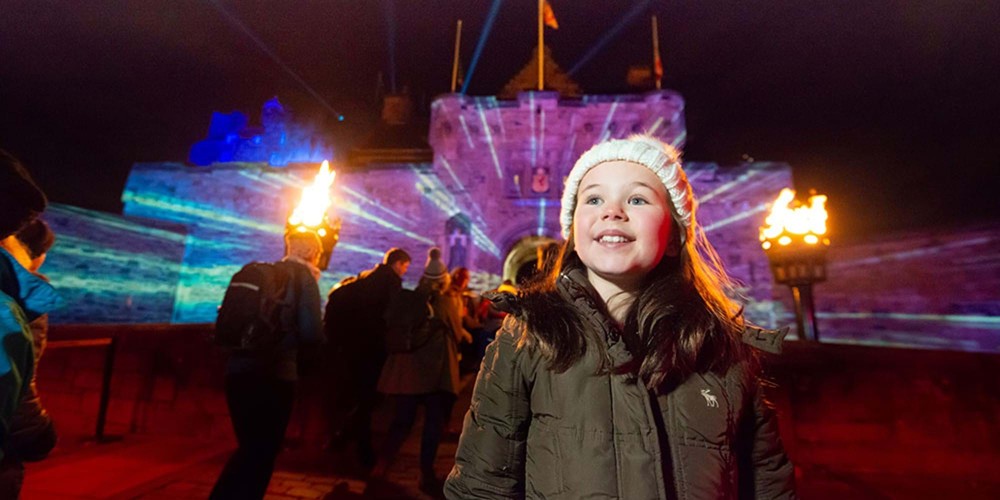 Edinburgh’s festive calendar is bursting with great December days out, from Santa Land to the city’s famous Christmas Market. Head to Edinburgh Castle where Rex, the castle lion, is guiding families through spectacular light projections and interactive storytelling to reveal the best kept secrets of the mighty fortress – it hid Scotland’s Crown Jewels for over a century!

Where and when: Edinburgh Castle, from now until 6 January 2022.

Expect playful projections, live music performances and larger than life characters as you weave your way through Leonardslee’s magnificent Grade I-listed gardens this December. The pièce de résistance is a gigantic illuminated moon, suspended above the lake.

Where and when: Leonardslee Gardens, Horsham from now until 22 December 2021.

Check out Leonardslee Illuminated for family nights out this December 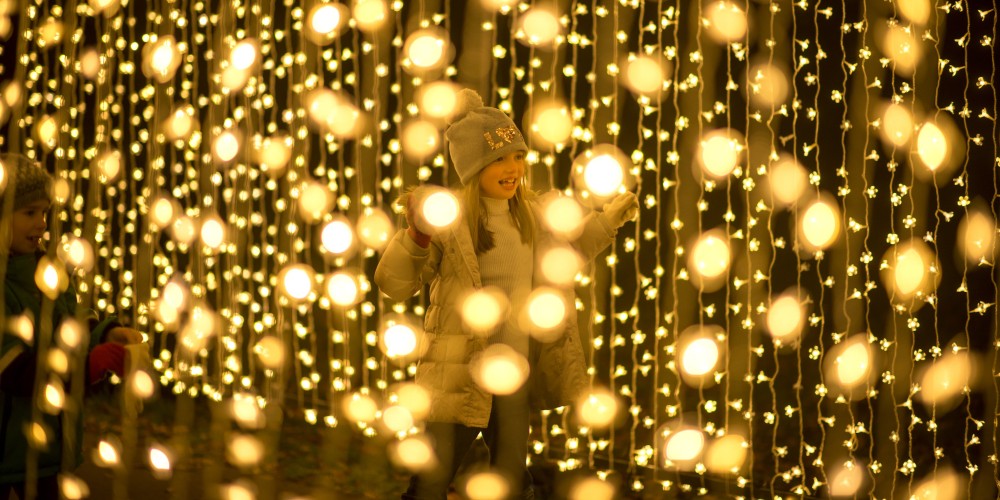 Christmas at Kew: the world’s most famous garden lights up December

Navigate glittering arches and reflective lakes. Roam through illuminated foliage. And you may find a very special Christmas guest hiding in Kew Gardens this winter. Keep your eyes open for the marshmallow toasting area too.

Where and when: Kew, Richmond from now until 9 January 2022.

Find out more about Christmas at Kew family fun this December 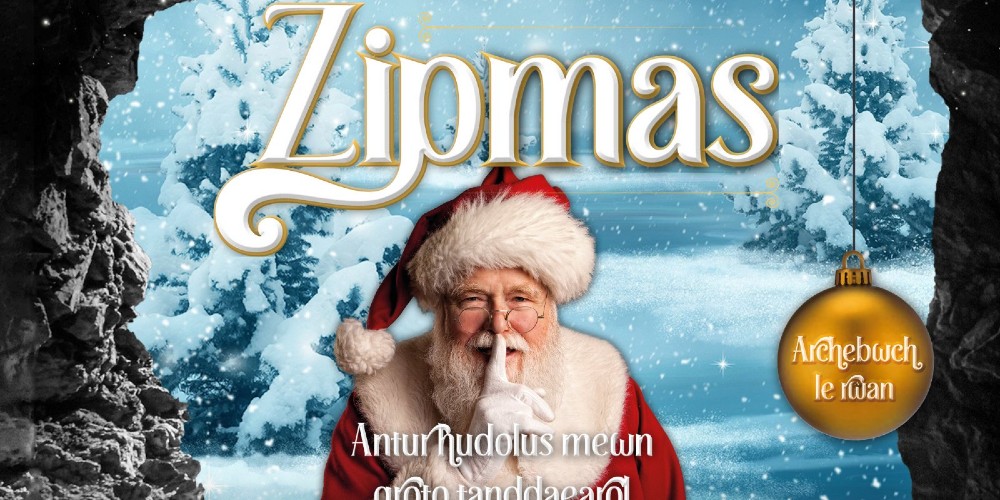 Zipmas at Zip World: meet Santa in his underground grotto

Climb aboard Europe’s steepest cable railway and ride deep into the Victorian Llechwedd slate mine. If that’s not exciting enough, Santa’s in residence in the underground grotto and waiting to hear wishes and hand out gifts. Don’t miss the craft station where you can decorate Welsh slate baubles. This has to be one of the most unusual December days out this year.

Where and when: Zip World, Snowdonia National Park from now until 24 December 2021

Discover the underground enchantment of Zipmas at Zipworld in Snowdonia 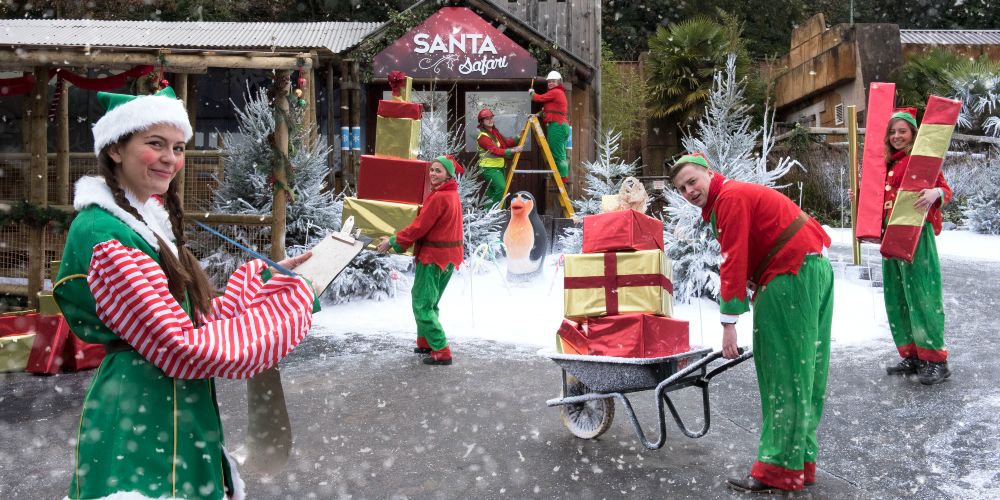 Not satisfied with reindeer? At West Midland Safari Park your visit to Santa also includes a four-mile safari drive, as well as walk-through exhibits, such as Land of the Living Dinosaurs, Penguin Cove and Lorikeet Landing. After meeting Santa, head to the elves’ workshop to pick your own toy and grab a drink from Mrs Christmas before catching a show at the Sea Lion Theatre.

Where and when: West Midlands Safari Park, Bewdley from now until 24 December 2021. 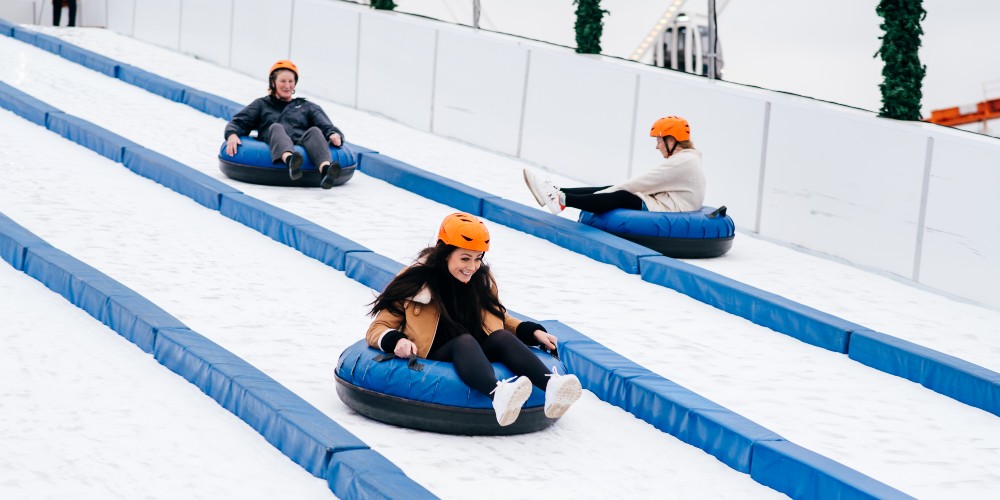 Hyde Park Winter Wonderland: dazzling December days out are back

With over 200 attractions, this year’s Hyde Park Winter Wonderland is bigger than ever. It has everything from fairground rides and ice skating to Christmas Markets, a circus show and ice-sculpting workshops. Don’t miss the Magical Ice Kingdom. It took 500 tonnes of ice and snow to create. Remember this year you need to book tickets for Hyde Park Winter Wonderland in advance. 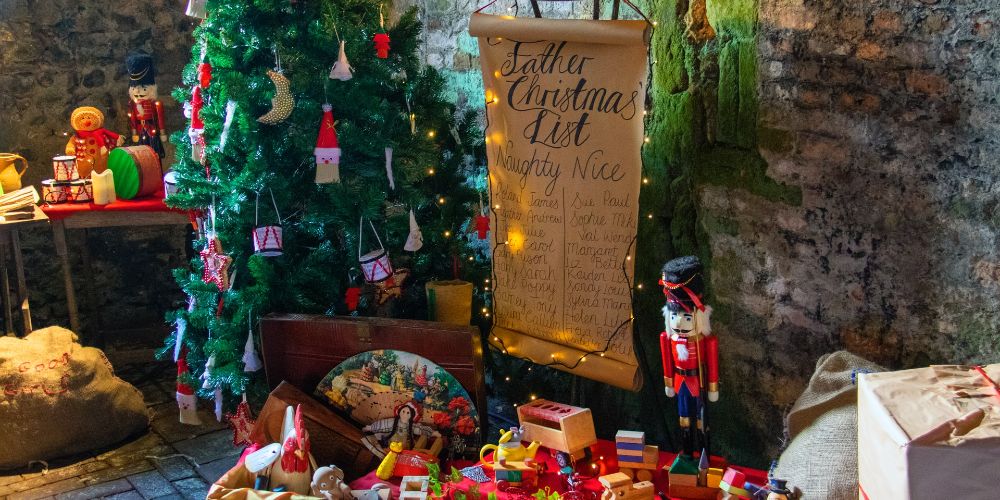 One action-packed Christmas ticket to Otterspool Adventure includes a visit to Santa in his grotto, and a gift too, of course. A peek at the ‘Make a Bear’ workshop and gingerbread decorating with Mrs Claus are also part of the fun at Liverpool’s favourite outdoor play centre this December. And kids can look forward to ice skating and a good old fashioned pantomime too.

Where and when: Otterspool Adventure, Liverpool from now until 24 December 2021.

Find out more about Christmas at Otterspool Adventure this December LEGOLAND at Christmas: December days out for LEGO lovers

This December LEGOLAND Windsor Resort’s 25 rides, shows and attractions are surrounded by a winter wonderland. Think frosty trees and twinkling lights galore. There’s a DUPLO Puppet pantomime and a Harbour Light show. And when Santa isn’t riding around the park in his sleigh, he’s giving out gifts in his cute log cabin.

Where and when: LEGOLAND Windsor Resort, Berkshire from now until 3 January 2022

Find out more about LEGOLAND at Christmas for family days out 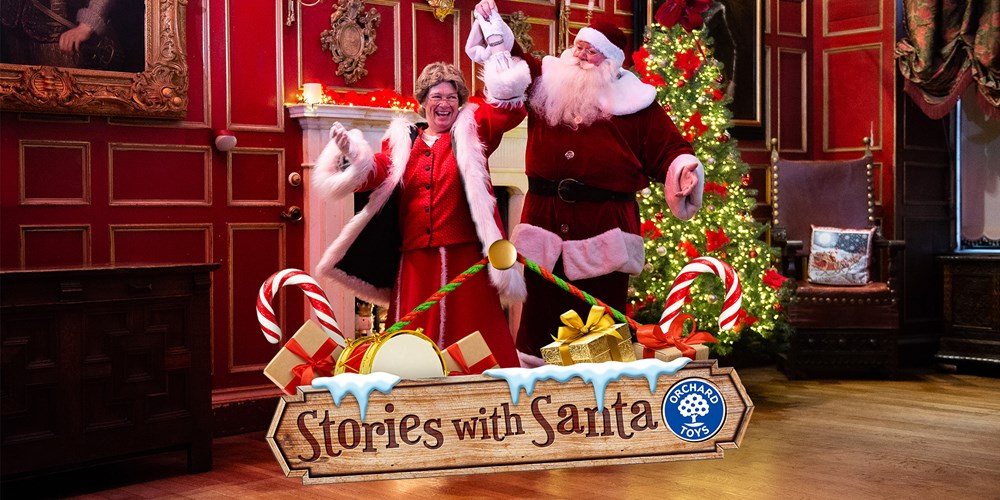 Christmas at Warwick Castle: December days out and Santa sleepovers

Christmas at Warwick Castle has everything in place for magical December days out, from ice skating and Santa to festive afternoon teas and light trails  through the grounds. You can even stay over in a cosy log cabin and wake up to the sound of sleigh bells as elves deliver Christmas wishes and gifts. All before whisking you off to spend time with Mr and Mrs Christmas.

Where and when: Warwick Castle, Castle Lane, Warwick, Warwickshire, from now until 3 January 2022.

Find out more about Christmas at Warwick Castle this December

Kids can grab a lantern and journey through nine different fantasy worlds at Chester Zoo this December. Along the way they’ll meet life-size illuminated animal and theatrical characters, as well as enormous lit-up flowers in the ‘Garden of Delights’ and dazzling penguins in their ‘Icy Kingdom’.

Where and when: Chester Zoo from now until 23 December 2021.

Find out more about The Lanterns at Chester Zoo this December 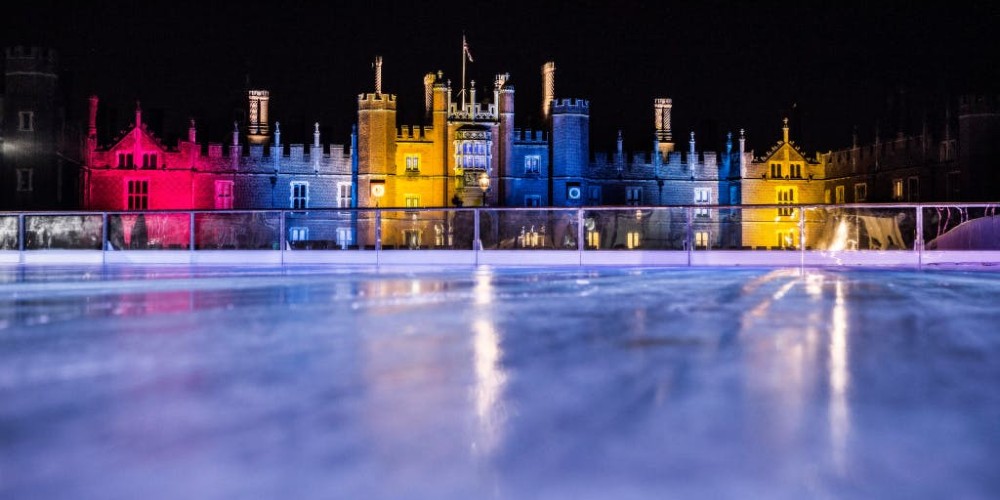 Visit Hampton Court Palace this December and kids can feel like royalty as they follow a dreamy light trail through the wintery grounds. The trail’s inspired by the palace’s astronomical clock and reveals striking projections of planets and moons. Don’t forget to leave time for a skate, Hampton Court’s ice rink is great another reason to visit in December.

Looking for more festive fun this December? Visit the best Christmas markets in the UK. And don’t forget to follow Family Traveller Instagram and Facebook for more festive inspiration – or just to say, hi.