Where are the best ice rinks in the UK this winter? You know the ones? They resurface the ice regularly so it’s smooth as glass. You can hire skates that don’t feel like bricks tied to your feet. There’s a great family atmosphere because your kids aren’t dodging speed skaters. And, possibly most important of all, the snacks are outstanding! We’ve laced up and glided forth on some amazing ice rinks recently. Take a look at the ones we can personally recommend for kids, teens and anyone who loves hot chocolate and has cosy mittens.

Somerset House: a 40ft Christmas Tree makes this one of the most festive ice rinks this winter

Last year we said a fond farewell to the Natural History Museum’s mother of all London ice rinks. Not going to deny we shed a frosty tear at the end of that era. But turns out resilience is our middle name, so we’re putting Skate at Somerset House at the top of our London list this year.

The skate space is bigger than ever for 2022/23 and don’t worry about missing the grandeur of the Natural History Museum. Somerset House is just as grand in a different way and they’ve made the courtyard a magical setting for skaters. Moët & Chandon are responsible for the decorations, so sparkle is a given. And a no holds barred approach to the traditional Christmas Tree sees a giant 40 footer in pride of place here right up until the middle of January.

Since it’s affiliated with Moët & Chandon, this is the one for rink-side champagne cocktails in the Skate Lounge. But fear not, Hotel Chocolat is serving up equally divine food and drink for families and Chalet Suisse is back this year with another pop-up Alpine restaurant.

If it’s time to stop hugging the edge of the ice rink, lessons are available from Skate School for kids and wobbly parents. Or, for the more confident who just want a bit of peace, book Chilled Sessions in the morning from 10am – great for younger skaters. And Skate Lates with UNIQLO brings DJs rink-side after dark, nice for teens who think they’re too cool to skate these days.

Book a stay near Somerset House Hyde Park Winter Wonderland: the largest of all outdoor ice rinks in the UK

Colour us not even slightly surprised that Hyde Park Winter Wonderland has the largest outdoor ice rink in the UK. Immense it may be, but we can confirm they take good care of the ice, so it’s a bump and rut free surface day and night. We’re not going to apologise for going on about how important this is. Having clomped round many rough rinks with kids we know from bitter experience, it’s the polar opposite of fun!

Despite its insane white-knuckle rides, Winter Wonderland really scores high on skating enchantment. The entire rink sits under a canopy of fairy lights and there’s even a Victorian bandstand in play. So if your dream rink is closely aligned to a good old fashioned Christmas card, you won’t be disappointed.

No skating lessons here, although if you go in the morning the rink is practically deserted. Admittedly you’ll miss out on the full twinkly light and after dark funfair dazzle. But having the largest ice rink in the UK almost all to yourself is fair compensation.

The ice rink is sponsored by Lidl and their speciality pigs in blankets with a choice of sauce are served rink-side. Though it’s Winter Wonderland so there’s no shortage of places to eat, drink and warm up in every direction.

The rink has Penguin Skate Aids for younger kids and bob skates – twin bladed skates that fit over outdoor shoes- for older kids. Skate hire is included in the ticket price and bob skates are free if you want them.

Book a stay near Hyde Park 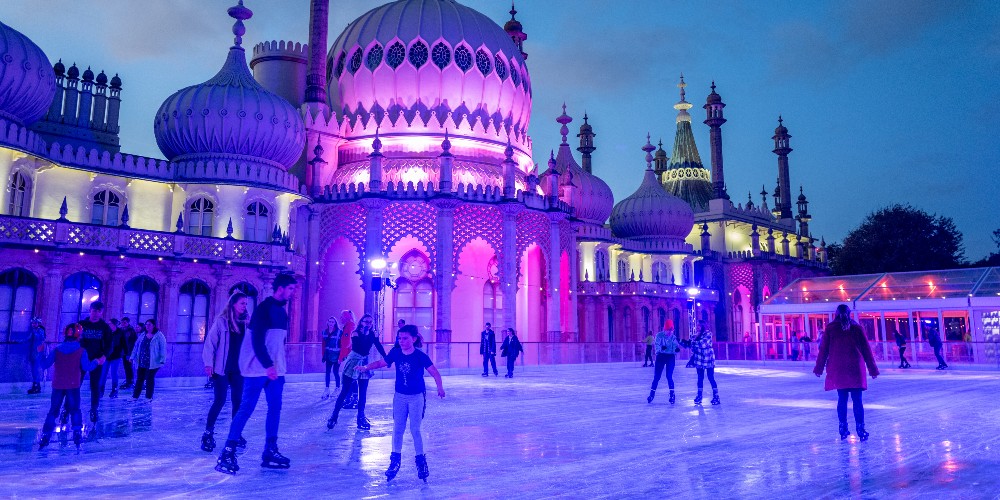 The Royal Pavilion Ice Rink, Brighton: the greenest skating in the UK this winter

This could very well be the most beautiful of all ice rinks this year. As if loveliness wasn’t enough,  The Royal Pavilion Ice Rink is also the only one in the UK powered entirely with renewable energy. So it’s green and gorgeous, how can you resist?

Go in the evening when the eccentric Royal Pavilion is floodlit, and skate to your heart’s content in spellbinding splendour, without a hint of guilt. That may not mean a whole heap to kids, but trust us the full-on magnificence of the setting won’t be lost on them.

New to this skating lark? Brighton has two ice rinks, one just for beginners

The main rink is fairly enormous and if you can stay upright on skates, that’s the place to be. Edge huggers and beginners have their own separate rink which even has a safe-area for the very youngest skaters to get confident. This is another rink with Penguin Skate Aids and bob-skates for kids.

The Royal Pavilion sits in North Laine, so you’re surrounded by colourful Christmassy bustle and plenty of great independent shops. However, if you need refuelling quick, the rink-side Bar & Kitchen serves up cosy drinks and snacks. It’s also a great spot to spectate for parents who don’t want to venture out on to the ice themselves. But you really should. Even a once round is close to magical and who doesn’t need more of that at this time of year?

Book a stay in Brighton 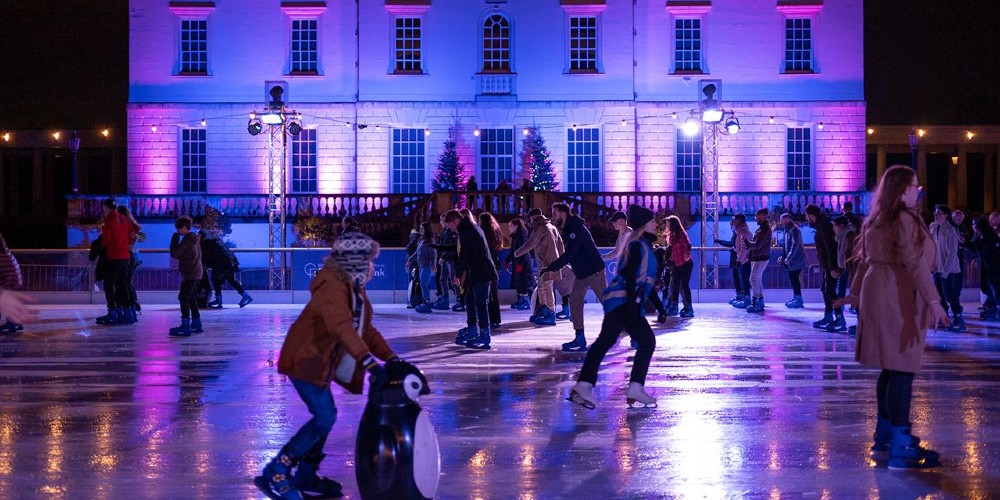 Skating in front of the Queen’s House, Greenwich

Queen’s House Ice Rink, Greenwich: some of the most child-friendly skating this winter

Another spectacularly regal rink we’re recommending this year is at the Queen’s House in Greenwich. Set in the Royal Museums Greenwich grounds it couldn’t fail to look stunning. But what we really love about skating here is how much thought has gone into making it safe and fun for kids.

Young skaters from age three can come along to Tiny Tots sessions, when the rink only operates at 20% capacity and extra marshals are on the ice if you need a hand. Relaxed Sessions are ideal for neurodiverse children who need a calm, crowd-free skating experience. And of course, Penguin Skate Aids are available here too.

None of the London ice rinks have views like this one

Don’t forget to take a look around while you’re skating. Apart from the ridiculously splendid Royal Museums themselves, you’ve views of Greenwich Park and Canary Wharf as well as an eyeful of London. If you’re tempted to make a day of it with younger kids, Cutty Sark has Toddler Time on Wednesdays and AHOY! Children’s Gallery is great fun for under sevens.

Book a stay in Greenwich

Glide, Battersea Power Station: the newest of London’s ice rinks and it’s on the river

Brand new for 2022, Glide at Battersea Power Station opened for the first time this November. What’s the verdict? It’s getting a lot of love, not least for its amazing skateable space. Not one but three interconnecting ice rinks make a change from the round-and-round experience. It’s also happens to have one London’s most iconic buildings as a backdrop and, it’s the only ice rink with views of the Thames as you skate.

Full-festive pretty much sums up the atmosphere here this winter. Fairy lights are very much in evidence, so there’s a lot of twinkling going on, everywhere. The Christmas tree isn’t quite as big as the Somerset House monster but, coming in at a not insubstantial 30ft, it’s plenty impressive. And if that doesn’t convince you completely, Glide was designed by the same team responsible for the much loved Natural History Museum ice rink.

Catch a boat to Glide for full festive day out feels

This is definitely one teens will like. It can get a little busy for younger kids in the evening, but it opens just after 9am, so go early and you’ll have more room to slip and slide around. Local food vendors provide the snacking at Glide, although Battersea Power Station is awash with restaurants and shops too. Plus, there’s a vintage funfair on site as well, if you know anyone small who likes carousels or helter-skelters. And don’t forget, you can catch an Uber Boat to Thames Clippers Pier to go skating at Glide: more excitement for a London day out.

Book a stay in Battersea

Ice Rink Canary Wharf: skate undercover right up until the end of February 2023

We’re starting this one with a caveat: if you want the full, glittery, festive ice skating extravaganza, this isn’t that. The Ice Rink Canary Wharf keeps it simple, clean and has a whole flock of Penguin Skate Aids, so it’s great for kids. What it lacks in magic it more than makes up for in space and the fact that it’s fully covered is another big plus. Organised seems to be the watchword here, there’s even a reminder to ‘skate in one direction’. That might not chime with free spirited frost sprites, but it’s pretty helpful if you’re wrangling a toddler round the ice for the first time.

Warm changing areas with good size lockers make life a lot easier especially if you’re dealing with more than one kid. And should all that make it sound a bit too utilitarian, cast your eyes upwards to the giant mirror ball, nothing utilitarian about that baby!

Canary Wharf is also the first of the London ice rinks to open every year and the last to close, so you can skate here into February. That might not have the Christmassy vibe you’re looking for now, but come the end of January it could be just the day out you need. And of course, slightly off season means fewer revelling crowds in early 2023.

Book a stay in Canary Wharf