An Arabian adventure: Oman for families

We just can’t help ourselves. We keep coming back.  Over the past 10 years, my three daughters and I have sailed around Oman’s islands, sleeping on deck under the stars, followed ancient watering systems along valleys, found hidden villages, gone wadi bashing and dune skiing, swum with turtles and shopped in colourful souks.

On our first trip, looking at their proximity on the map, I thought Oman must be the new Dubai. But that couldn’t be further from the truth. Yes, they both share the same latitude and climate, both have golden desert lands and cerulean coastlines, but Oman has  a conspicuous historic culture and sense of place that you don’t encounter in its sister state.

The capital, Muscat, is a singularly sanitary  city where you’re fined more for a dirty car than for breaking the speed limit. The spotless roads are lined with whitewashed villas, manicured municipal gardens and gleaming vehicles that look like they’ve just driven off a forecourt.

Locals are particularly proud of their new opera house and elegant mosque, which cost more than  £177 million. Its cool, shiny marble exterior defies the intricate grandiosity that lies within. We all marvelled at the largest carpet in the world, an Iranian masterpiece, which took 600 women three years to weave, not to mention the 7-tonne Swarovski crystal chandelier that radiates a golden light over the 6,000 all-male congregation. Children over 10 are allowed in the mosque, but need to cover their heads with the scarves that are provided at the entrance. 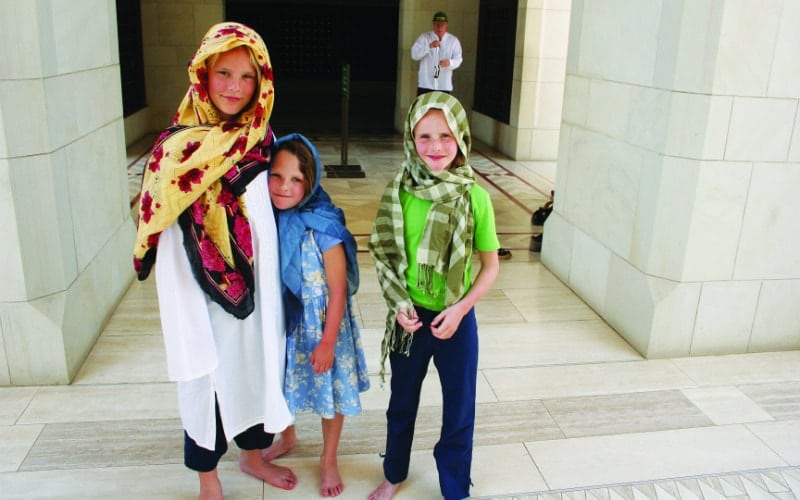 Down on the coast, the colourful Sultan’s Palace is flanked by two forts that were built by the Portuguese in 1587, strategically placed to guard the entrance to the city. A little further along, there was an eye-opener for the children. Packed to the brim with white-robed men touting a ‘stinky’ array of giant gambas, waist- high tuna and trumpet fish. The nearby souk was great for souvenir shopping and local goods such as painted perfume bottles, precious frankincense, and traditional dishdashas worn by Omani men (irresistible at a mere £10).

Hundreds of metres of private shoreline at the  Al Bustan Palace’s scenic beach are a paradise for families. A red carpet is rolled out every morning from the hotel to the shore so you don’t scorch your feet on the sand. We snorkelled with the resident turtles and, just as we despaired of seeing dolphins in the bay, spotted three of them gracefully dipping and diving only metres from the shore, then rushed to the tennis lesson. The Discover Scuba course was a big hit, too.

Following a quick trip to the supermarket, we drove to the new marina at The Wave and boarded  a catamaran. The children were anxious about the charter, but soon squealed with delight as they checked out their cabins and met Captain Abdullah (a master of card tricks and paddle board racing). They later declared this their favourite bit of the holiday.

We headed due north to the Daymaniyats, a small cluster of about nine uninhabited islands about 12 miles off the Omani coast. Still uncharted and relatively remote, they’ve recently been declared a national park. They’re as unspoilt as anything you’ll find in the Indian Ocean and are top of the list for those looking for an adventure. At night we relaxed on the deck under shooting stars to the sound of waves breaking on the reef and the gentle creak of the boom.

At dawn we swam to the shore, hovering over shoals of fusilier, parrot and angel fish. The water was a balmy 30C and the air was a hairdryer-hot 36C. We drifted over planets of corals, slowly taking in the galaxy of underwater worlds that were home to strands of long-haired purple and yellow corals as well as colourful angel and damson fish. We even found Nemo.

The southern slopes of the Hajar Mountains, which drop from heights of more than 3,000m straight into the warm Gulf, are famous for their oasis villages and date groves – in stark contrast to the sand dunes  of the sparsely populated Wahiba desert. An off-road, roller-coaster ride across the waves of the ever-changing pattern of dunes towards the desert camp had us all screaming with excitement. Later, I sat in my tent listening to the children gleefully running down dunes in the dark. 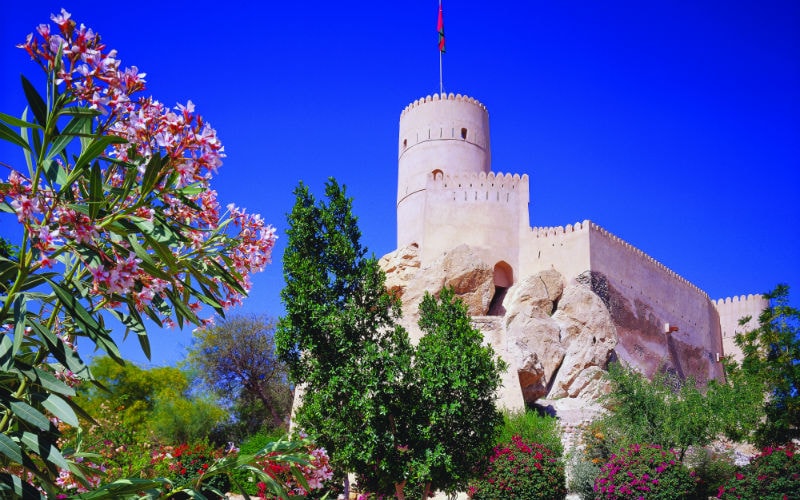 Hud Hud’s safari accommodation, in six canvas bell tents complete with solar showers and wooden  pit loos, is designed for comfort. The majlis, or sitting-room tent, is adorned with silver coffee pots, Persian rugs and dressed in the red tartan sarongs favoured by Omani men under their white dishdashas.

We squatted cross-legged and regaled each other with the day’s activities. After a spot of stargazing and a full day’s exploring, hiking, swimming and eating, we fell onto comfortable mattresses dressed in crisp white linen to the sound of, well, nothing. 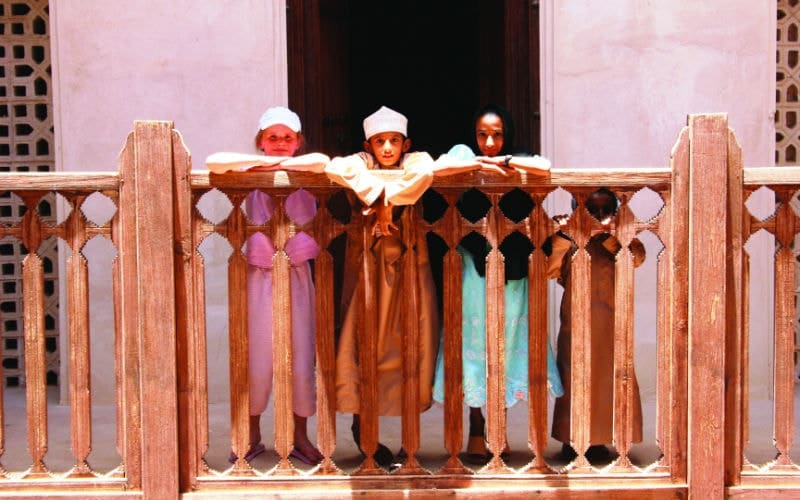 We stopped in the ancient capital Nizwa to admire the elaborate filigree work on the silver daggers being sold in the recently renovated souk and enjoyed the banter and bartering of locals in the fruit and vegetable market. Early every Friday morning, market day, there are hectic scenes of cattle and goat trading.

A stretch of winding road took us to the jewel of the Hajar Mountains. Our ears popped as we climbed more than 3,000m to the summit of Jebel Al Akhdar (Green Mountain). The temperature fell with each vertical kilometre, passing dappled paths leading through terraced farms fed by ice-cold water running through the falaj irrigation channels. Wild juniper, peach, orange, apricot and grapevines clung to the slopes against all odds.

After all this touring around, the Alila Jabal Akhdar hotel was ‘so quiet it hurts my ears’, said one daughter. Unused as we are to absolute tranquillity, its abnormal stillness lulled is into an instant state of peace and relaxation. It was the perfect ending to our most recent foray into Arabia. The charm of this quiet land – where camels mingle with limousines and ancient forts have satellite dishes – lies in its subtle and unassumingly gentle way of introducing tourists to its natural wonders and age-old Islamic-cum-Bedouin culture.

Gulf Air, which has a Sky Nanny service, flies to Muscat from £324 return. Flights with Oman Air cost from £335 return.

The most pleasant time to visit is between October and April when temperatures average between 25C and 35C during the day. It’s generally 10° cooler in the mountains.

Celebrity interview: Kate Silverton on travelling with her kids